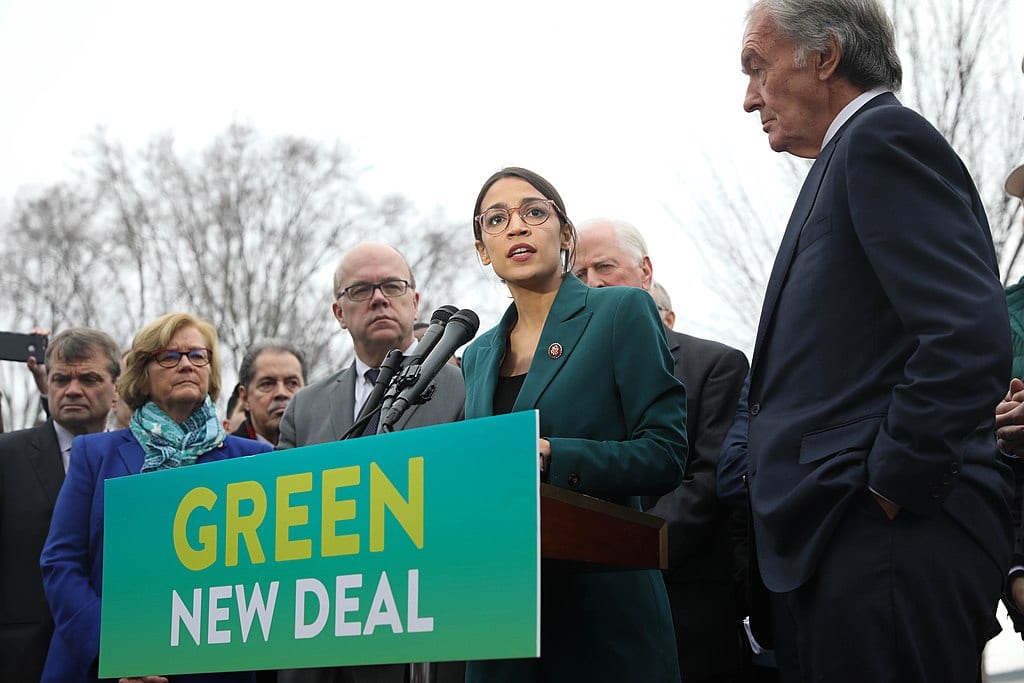 If you haven’t read the details of the Green New Deal, let me save you the trouble: it’s a raging assault on America’s already-declining working-and-middle-class. When Congresswoman Alexandria Ocasio-Cortez (D-NY) and her fellow Green-Marxists in the Democratic Party put forward their proposal, they made it clear that this program was intended to be used on the “most at-risk” communities in the United States.

The Green New Deal policy says that all of these newfangled processes will be tried on “The frontline communities that are already facing the ravages of climate change and pollution and working-class communities reliant on fossil fuel industries.”

Interestingly, the Democratic Party’s vast new social engineering project will not be tried in the towns and communities where America’s billionaires and pentamillionaires reside. No, according to the Green New Dealers, it’s not their wealthy friends who are the cause of global warming. It’s you and your struggling family. You are the dirty, rotten polluters who have to rely on the far more efficient and affordable fossil fuel-driven technology to get through the day. America’s democratic globalist managerial elite can afford to drive Teslas and subside on overpriced Kale juice from Whole Foods. It’s you SUV-driving, God-fearing, hard-working, mortgage-paying, middle-class Americans with your pesky 2.5 kids that are the problem!

Fact is, this proposal is not about protecting the vulnerable working-class communities from the supposed effects of anthropogenic climate change. How could it be? Poverty is one of the greatest contributors to supposed man-made Global Warming. Yet, the Green New Deal would eviscerate the job market for most Americans, rendering everyone poorer.

The United States is not the first country that has tried a Green economic model. Spain is one notably example. The results were disastrous. According to a 2011 AEI report written by Kenneth P. Green, “Green programs in Spain destroyed 2.2 jobs for every green job created.” The 2011 report went on to state that, “The capital needed for one green job in Italy could create almost five jobs in the general economy.” And, of those new Green manufacturing jobs, most were higher-skilled than the old-type manufacturing jobs — meaning the working-class, again, got hardest hit.

Everything in a Green economy is more expensive for average consumers than in the current fossil fuel-dominated economy. The cost of energy in Germany and Denmark, where wind and solar power have come to replace traditional fossil fuels, was 7.5 percent higher than what they were before the “renewable” sources of energy became the dominant power sources in those countries. Also, Denmark had the highest electricity prices in the European Union.

The Green New Deal leaves nothing to chance. The Greens intend to go after our land, our roads, our homes, our jobs, even the water we drink and the food we eat. In each case, the costs are felt most by the working-class, who are already struggling. Imagine having to pay Whole Foods prices at every grocery store. That’s basically what the Green New Deal will do to the cost of food for ordinary Americans.

All of this to uphold an artificial standard of protecting the environment from noxious greenhouse gases (carbon, methane, nitrous oxide, and ozone). Cortez and her comrades argue that greenhouse gases must be curbed within a decade (before the world ends, in her estimation). At the same time, these Greens assure Americans that they will suffer no inconveniences from these changes. But, the basic necessities of life today are provided to most Americans because of the cheapness of fossil fuels. Fossil fuels may be “dirty,” but they provide the essential robustness of the American economy (and the backbone of the middle-class).

The Greens need a better plan than what they’re offering. Their current program calls for replacing fossil fuels with “renewable” sources of energy (namely, wind and solar power). Yet, it has been proven that these energy sources will never match the cheapness and efficiency of fossil fuels. If the Greens were serious about offering viable alternatives to fossil fuel, they’d at least look at energy sources, like nuclear power, as a way to mitigate the supposedly destructive effects of climate change — while simultaneously protecting the lifestyle of working-class America.

Yet, Cortez and her fellow “democratic socialists” call for the abolition of nuclear power as well as fossil fuels — meaning that only solar and wind power are viable alternatives to fossil fuels under the Green New Deal. But, California and Germany have already tried this model and they’ve been outpaced by France and Canada in affordable energy production, because both Paris and Ottawa invested copiously in nuclear power. Nuclear power is clean, affordable, and reliable. The Greens don’t really care about providing affordable or clean energy to ordinary people.

The Green New Deal is all about “environmental justice,” which is Marxist for “sticking it to the middle-class.” It doesn’t matter that our country has led the world in reforming its polluting ways (since 2005, America has led the world in reducing its carbon footprint). What matters is that, since the Industrial Revolution, some of our industries polluted (as did every other country). It also doesn’t matter that China, not the United States, is the world’s leading — unapologetic — polluter. We are forever guilty. Therefore, we must pay reparations by restraining our productivity and consumption today, while allowing China to outpace us.

The Green New Deal is also about punishing the working-class for having supported Donald Trump in 2016. Sixty-three million Americans in the middle-and-working-class put Donald Trump into office. Trump has been the greatest threat to the Left’s quest for absolute power in the last 50 years. The working-class, once a reliable Democratic Party vote, switched sides in 2016 and voted for him over Hillary Clinton, in a clear repudiation of Leftist orthodoxy. Now, like all heretics, the working-class of America must be punished for its insolence by the high priests of the Left’s low culture. The Green New Deal is yet another attempt to decimate the unrepentant, Trump-supporting working-class.

Remember that, the next time Alexandria Ocasio-Cortez and her band of Green-Communists lecture you about how to live your lives. They hate you and they want to destroy you. Don’t let them. Repudiate the Green insanity at the ballot box in 2020.