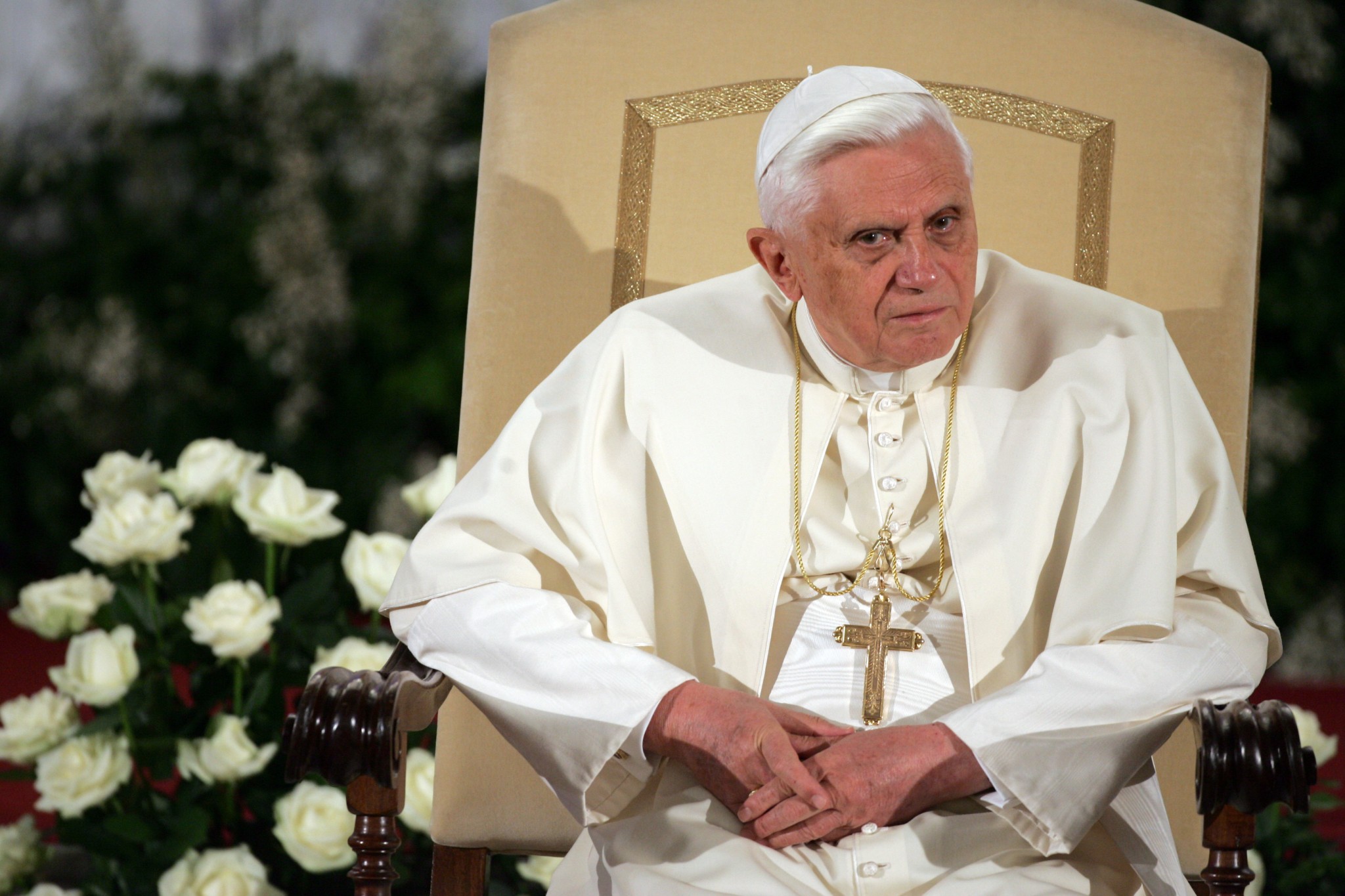 German journalist Peter Seewald in Volume I of his biography of Joseph Ratzinger, who became Pope Benedict XVI on April 19, 2005, called Ratzinger, “perhaps the greatest theologian ever to sit on the chair of St. Peter.” As a young priest, Seewald writes, Ratzinger appeared shy, timid, and physically unimposing, but that appearance masked an “intense cerebral brilliance” that manifested itself throughout his priestly career. Pope Benedict died Saturday at the age of 95. The Catholic Church and the world will miss him.

The struggle that Joseph Ratzinger, later Pope Benedict, waged against the “false Gods” of modernity goes on. And so does the West’s struggle against the false God of Communism headquartered in Beijing.

He was born in Marktl in Bavaria, Germany, to parents who “practiced a decent Catholic piety,” according to Seewald. As a young boy, Ratzinger experienced the dying days of the Weimar Republic and the rise of Hitler. He was conscripted into the Hitler Youth at age 14, and during the war he was assigned to an air-defense battery. Toward the end of the war, he deserted by going home, and was held in captivity as a POW when American troops occupied his village. (The captivity lasted 40 days.)

Seewald writes that Benedict’s experience under Nazi rule shaped his priesthood and global outlook, just as it did for a young Polish priest named Karol Wojtyla — the future Pope John Paul II. Their careers in the church had many parallels, including important contributions to the Second Vatican Council and in steering the church through the challenges of modernity and the Cold War.

Ratzinger served briefly as a parish priest but church leaders soon recognized that his true calling was as a teacher and theologian. Ratzinger’s model, Seewald notes, was St. Augustine whose search for God combined reason and faith. Students and later church leaders recognized the “sharpness of [Ratzinger’s] mind” and his “passion for truth and resolute questioning.” Experience and intense study convinced Ratzinger of the permanence of human imperfectability. For Ratzinger, Seewald writes, “only God was perfect,” and “every human attempt to rise to perfection ended in disaster.” This made him an enemy of “progressivism,” an ideology that positions reason and education in opposition to faith.

Ratzinger, like Wojtyla, viewed Communism as the logical end of progressivism — both were faiths that challenged a God-centered universe. And like Whittaker Chambers, Ratzinger viewed faith’s struggle with modernity as transcending the Cold War conflict between the West and Communism. It was faith in God versus faith in Man. When the Berlin Wall fell and Ratzinger’s German homeland reunified, the church’s struggle with modernity continued unabated.

Seewald’s second volume on Benedict was published in November 2021, and it covers Benedict’s life from Vatican II through his papacy and post-papacy. It shows Benedict as a theological bulwark against modernity and its passions, or what he called “false Gods” — abortion, sexual promiscuity, homosexual marriage, etc. It also shows him as a quiet but determined crusader within the Curia to root out and punish priests, bishops, and cardinals who committed and covered-up the sexual abuse of children.

Seewald also published a book-length series of interviews he conducted with Benedict titled Light of the World. George Weigel wrote that in these interviews the reader will meet Benedict as teacher, pastor, Christian disciple, and “witness to the truth of God in Christ.”

Pope Benedict shocked the church and the world when he resigned as pope in 2013. His resignation led to the election of Jorge Mario Bergoglio of Argentina, a former Jesuit, to the papacy as Pope Francis. Unlike his two predecessors, Francis lacked personal experience with totalitarianism. And worse, Francis brought with him to the papacy vestiges of Latin America’s “liberation theology,” which attempted to merge communism with Catholicism. Perhaps that is why Pope Francis has egregiously entered into agreements with the Chinese Communist Party (CCP) which effectively surrender the selection of bishops in China to the CCP. And perhaps that is why Pope Francis has failed to champion the great Chinese Catholic Cardinal Joseph Zen during his ongoing persecution by the CCP. Cardinal Zen, a fierce critic of the CCP, was recently found guilty of helping Hong Kong’s pro-democracy protest movement.

World leaders have reacted to Benedict’s death with praise. Britain’s Prime Minister Rushi Sunak called Benedict “a great theologian.” King Charles expressed “deep sadness.” French President Emmanuel Macron said Benedict “worked with soul and intelligence for a more fraternal world.” The Archbishop of Canterbury called him “one of the greatest theologians of his age.” Perhaps Italy’s Prime minister Giorgia Meloni said it best: Pope Benedict “was a giant of faith and reason.” Interestingly, Pope Francis was more subdued in his praise, expressing thanks for his “kindness” and his “testimony of faith and prayer, especially in these final years of retired life.”

The struggle that Joseph Ratzinger, later Pope Benedict, waged against the “false Gods” of modernity goes on. And so does the West’s struggle against the false God of Communism headquartered in Beijing. But sadly, we will no longer have Benedict’s voice and pen to brilliantly use faith and reason to shine the light of God’s truth. R.I.P.