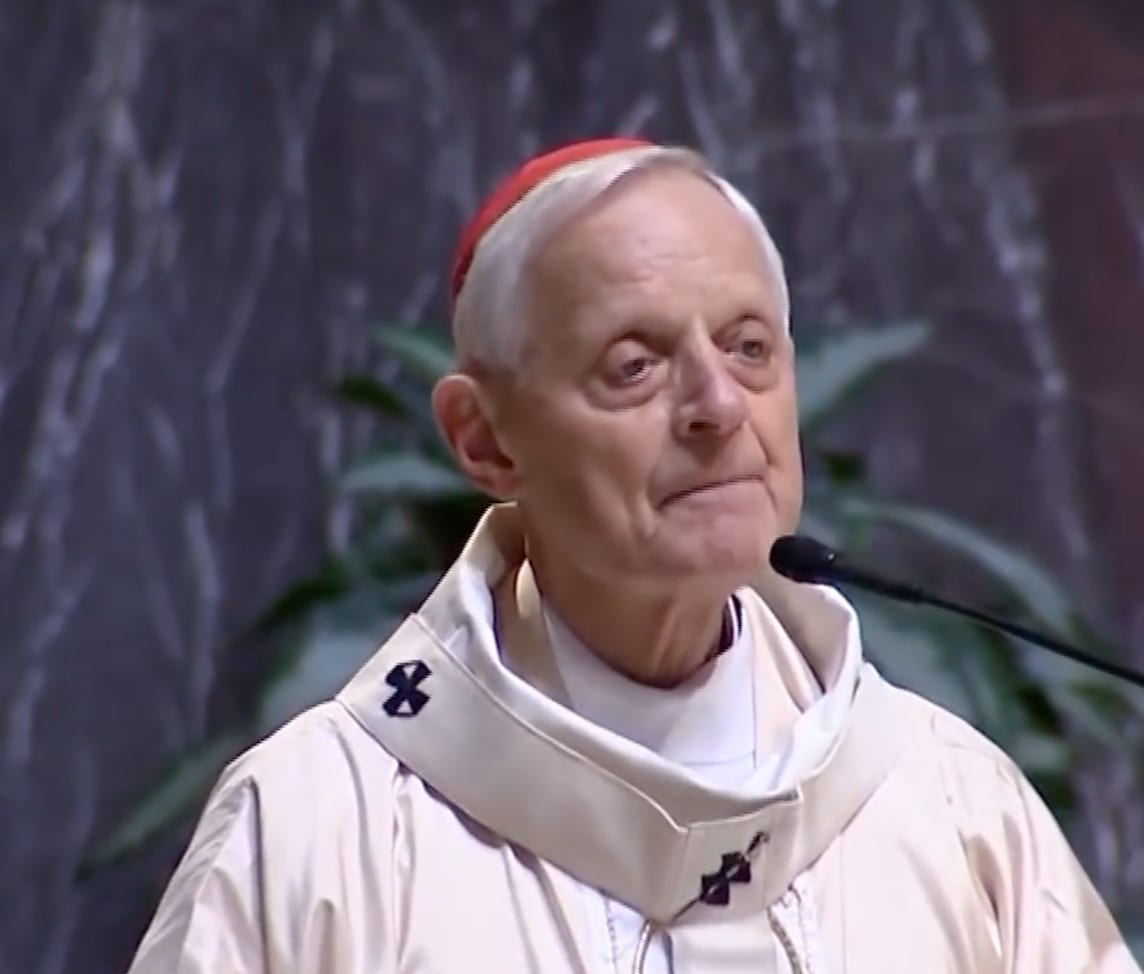 Trending
Are We Really Not Going to Talk About That Ukrainian 737?
by Scott McKay
AOC Hit List Targets Two Dozen Democrats
by David Catron
The Democrats’ Strange Reaction to the Death of Qassem Soleimani
by George Parry
Sign Up to receive Our Latest Updates!
Register
Hot Off
The Press
The Talkies
Joker’s Success and the Success of Postmodern Liberalism
by Adam Ellwanger
At Large
Brexit Cries Out for Radical Toryism
by Stephen MacLean

Some of Donald Wuerl’s priests called him the “Tin Man,” a reference to his cold, heartless style as the archbishop of Washington, D.C., a position from which he has now formally resigned, though outrageously Pope Francis is permitting him to continue as an “apostolic administrator” until his successor arrives.

It is hilarious that Wuerl became arguably the most powerful American cardinal in the “pastoral church of Pope Francis,” given that Wuerl is the least pastoral prelate imaginable. He instinctively avoided encounters with his flock and priests, unless they served some immediate interest or enjoyed riches and power. “He is a robot,” said one of his priests. “All he cared about was money and living as comfortably as possible and whatever else he got up to.”

Around three years ago, I ran into a very peculiar chap coming out of Wuerl’s personal garage at 10:30 at night. He described himself as Wuerl’s “personal chef,” but the archdiocese refused to answer my questions about his employment status. To this day, I still don’t know this individual’s identity. I was told that after I reported his odd habit of parking not in the employee lot but in the cardinal’s personal garage (attached to Wuerl’s Embassy Row penthouse apartment) the “personal chef” vanished, as did Wuerl’s priest-secretary (who was living in Wuerl’s penthouse), Fr. Charles Cortinovis. (I wrote this story up for the Daily Caller, “Who is the Personal Chef of Donald Wuerl?“)

It appears that Cortinovis, shortly after that article appeared, got Wuerl to orchestrate his transfer to a parish in Maryland, St. Ambrose. Or possibly an angry Wuerl reassigned Cortinovis. In any case, his transfer meant displacing pastor Fr. Kevin Kennedy, who wrote to his parishioners in December 2015 that his hasty transfer and replacement by Cortinovis came as a “surprise” to him after seven and half years of service in that role. “It is happening abruptly,” he wrote to them. (Cortinovis’s service to Wuerl appeared to have lasted less than a year, an oddly short period of time for a priest secretary to a cardinal. Cortinovis did not respond to my request for comment about the brevity of his tenure.)

At the time I asked a Church insider why Cortinovis would quit so quickly. He agreed that it was “peculiar” and noted that Wuerl has cycled through a parade of priest secretaries. Having to do dirty work for a particularly touchy member of the Church’s Gay Mafia, he said, is an “awful job.” I remember I contacted Fr. Kennedy to ask about his hasty ouster from St. Ambrose. His response was downright bizarre. He has “nothing to do” with Wuerl, he explained, as if he was talking about the head of a crime syndicate. When I probed Kennedy further, he hung up on me.

“Donald Wuerl is a criminal and the archdiocese is a criminal enterprise,” an angry mother with children in a D.C. archdiocesan school said to me. “He sent a Gay Mafia priest to our children’s school and destroyed it.” I have heard many such stories from angry parents.

Yet Pope Francis, even as he pink-slipped Wuerl on Friday, had the gall to describe his tenure in glowing terms and praised the “nobility” of his quitting for what he implied were nothing more than good-faith “mistakes.”

No sooner had that disgraceful papal statement gone out than I got a call from a prominent abuse victim denouncing Francis for his “outrageous” refusal to hold any derelict bishop accountable. “That statement in praise of Wuerl is disgusting,” he said. This victim told me that Pennsylvania Attorney General Josh Shapiro regarded Wuerl as the “dirtiest” of the bishops. With his reptilian coldness, Wuerl in Pittsburgh repeatedly returned molesters to ministry and famously eulogized one of them, George Zirwas, after he died at the hands of a gay hooker in Havana. “Fr. Zirwas,” intoned Wuerl at his funeral (to which Wuerl had invited 21 priests and another bishop), had so much “potential,” meaning that Wuerl might have rehabbed him had he lived and sent him to to the top of the hierarchy alongside rapist Theodore McCarrick.

Wuerl covered up McCarrick’s molestation for years and used his influence to promote gay predators such as Bishop Michael Bransfield and Monsignor Walter Rossi. “When those three got together — Bransfield, Wuerl, and Rossi — it was like watching a scene from Mean Girls,” said an archdiocesan observer. “These are some seriously sick puppies.”

In Pittsburgh, Wuerl once had to settle hastily a lawsuit brought by a disgruntled seminarian named Tim Bendig who said that he had been abused by a priest in Pittsburgh. In the course of his pre-trial deposition, I was told by multiple sources, he repeated the gossip of Pittsburgh seminarians about Wuerl’s alleged homosexuality, gossip to the effect that Wuerl had a boyfriend at the seminary who had been seen leaving his room with “tussled hair.” Several parties to the deposition say that hearsay contributed to Wuerl’s decision to settle the case.

By naming Wuerl the “apostolic administrator” until a successor is chosen, Pope Francis is in effect giving Wuerl more time to sponge up incriminating evidence and select a corrupt dolt to do his bidding in the future. What a gang of crooks, frauds, heretics, and perverts Francischurch is! I am even hearing whispers that the piggish Wuerl crony Cardinal Tobin of Newark (who sent the infamous accidental, “Nighty-night baby” text) is under serious consideration as the next archbishop of Washington, D.C. Francis loves Tobin in part because he crossed swords with Vice President Pence during their time together in Indiana (Tobin was archbishop of Indianapolis for a stretch.)

A couple of weeks ago some concerned Catholics in Newark contacted me to say that a dubious Italian soap actor was living with Tobin at his cathedral rectory. The actor’s name is Francesco Castiglione. I called Tobin’s spokesman, the ironically named Jim Goodness, and asked him if the actor was living at Tobin’s rectory. “I am not going to entertain that question,” replied Goodness. Translation: Castiglione is living there, and presumably would follow Tobin to DC should he get the nod. Who knows, maybe Tobin and Castiglione will end up in Wuerl’s vacated Embassy Row quarters.