Special Report Climate Change,Donald Trump,Green Energy,Joe Biden,Olaf Scholz The Europeanization of American Energy Policy - The American Spectator | USA News and Politics
Menu
Special Report
The Europeanization of American Energy Policy
In fact, even the Germany of Olaf Scholz is acting more in the style of America under Donald Trump.
by Kevin Mooney
Joe Biden on the phone with King Salman of Saudi Arabia on Feb. 9, 2022 (The White House/Wikimedia Commons) 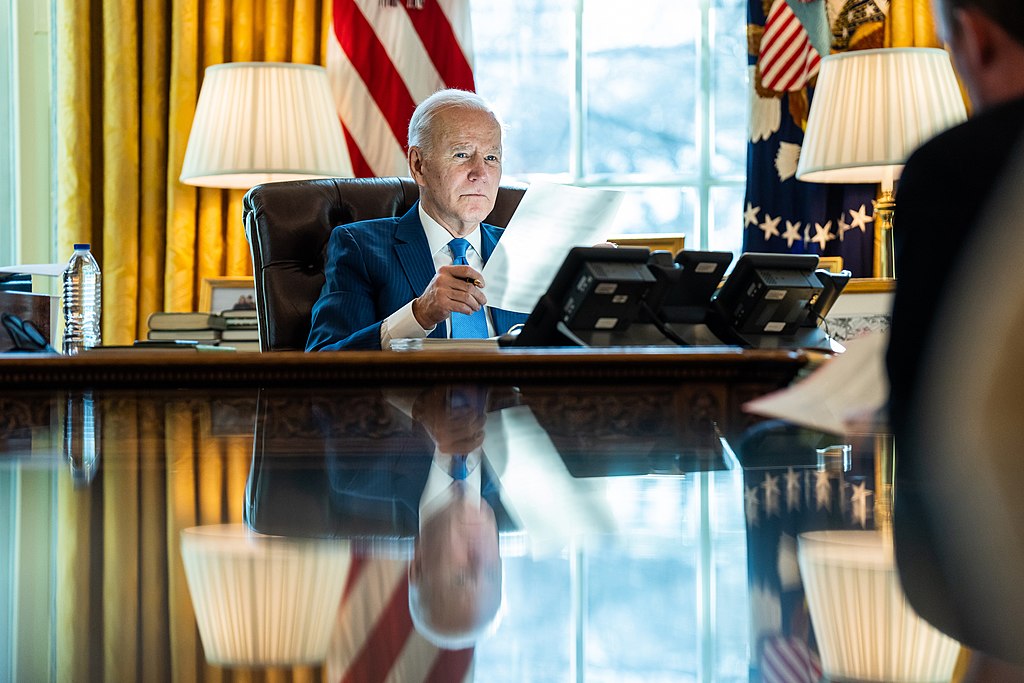 Is there anything a foreign agent of either Russia or China would do differently than European or American policymakers who embrace green energy schemes?

If their assigned objective is to undermine the economic and security interests of the European Union, NATO, and the U.S., they would have a difficult time outpacing the self-inflicted wounds associated with “net-zero” campaigns aimed at curbing greenhouse gas emissions.

The irony here is that while Russia’s invasion of Ukraine has jolted some European leaders into embracing realistic energy policies, Team Biden is now modeling its approach after the worst that Germany and other EU nations had to offer to their citizens.

Policymakers who have doubled down on anti-energy initiatives all in the name of climate change are encountering hard realities that conflict with politically fashionable, but economically unsound concepts.

Exhibit A here would be Germany, which has Europe’s largest economy. The Institute for Energy Research, a Washington-based nonprofit that supports free market policies, reports that after Russia invaded Ukraine in February 2022, Germany need roughly a half-trillion dollars to prevent the lights from going out. “That is the cost of the cumulative scale of the bailouts and schemes the [German] government has launched to prop up the country’s energy system since prices have skyrocketed and it lost access to natural gas from Russia,” IER explains.

Fixing the blame purely on Vladimir Putin’s aggressive actions doesn’t quite wash since Germany was already taking stage direction from the U.N. and its periodic climate change reports, which conflict with scientific findings. Costs are rising in Germany because its political figures, operating at the behest of green activists, shut down nuclear and coal plants in exchange for unreliable “renewable energy.” How’s that working out?

Putin’s war has had an exacerbating influence on an already unstable energy posture in Germany that predates the Russian invasion. The follies of relying on Russian oil and gas while shutting down domestic avenues for energy production have been brought into sharp focus. Even so, Germany’s Green Party, which is part of the coalition government in Berlin, continues to push for terminating coal use by 2030. The deadline fits into larger strategy built around the perceived threats of climate change. Environmental activist groups in Germany such as Letze Generation (Last Generation) claim that drastic government action is needed now to prevent an emerging climate crisis in the not too distant future.

But for contemporary Germans who need the lights turned on and the electricity running, the crisis stems not from climate change per se, but climate policies that empower hostile foreign powers. Robert Habeck, a Green Party politician, who is now serving as Germany’s economy and energy minister, has basically acknowledged as much in his comments to the press. Small wonder then that Germany has abruptly changed course and is turning back to coal as a way of offsetting its reliance on Mother Russia. In fact, Bloomberg News reports that Germany is consuming coal at “its fastest pace in at least six years.”

How this policy shift squares with commitments to “net zero emissions” is an open question. More than 36 percent of the electricity on Germany’s power grid between July and September of last 2022 was produced by coal-fired power plants, a sharp increase from the prior year, according to government figures. At the same time, German Chancellor Olaf Scholz has decided to keep his country’s three remaining nuclear power plants running through at least part of 2023.

Germany is back on its heels in part because it has only recently taken steps to build liquified natural gas import facilities. Keep in mind that President Trump had warned Germany to avoid becoming overly dependent on Russian energy, but to no avail.

Under Trump, the U.S. had become energy independent for first time in more than six decades — meaning the U.S. produced more energy than it consumed. That was primarily the result of hydraulic fracturing and horizontal drilling techniques that made it possible to access large deposits of shale gas. The U.S was suddenly in position to free itself, and its allies across the globe, from relying on unstable and unfriendly regions of the world to meet their energy needs.

Unfortunately, the Biden administration has abruptly changed course with its own “net zero” ambitions modeled after the U.N.’s anti-emissions proposals. The irony here is that while Russia’s invasion of Ukraine has jolted some European leaders into embracing realistic energy policies, Team Biden is now modeling its approach after the worst that Germany and other EU nations had to offer to their citizens. The American Energy Alliance, a nonprofit that supports abundant, reliable energy for U.S. consumers and businesses, has published a list highlighting “125 Ways Biden and the Democrats Have Made it Harder to Produce Oil and Gas.” That process began with canceling the Keystone XL pipeline, which would have transported vital energy resources from the oil sands in Alberta, Canada to Texas. Since then, the administration has accelerated regulatory changes that put the screws to domestic energy production in the U.S. much to the detriment of American energy consumers.

But what about climate change? Is there a “climate crisis” that makes it necessary for government agencies to constrain private enterprise?

The Heartland Institute, a free market think tank based in Illinois, has produced a series of reports from scientists and researchers from across the globe debunking the results of highly politicized U.N. climate assessments. The Heartland reports call attention to the significant natural influences that drive climate change while also unpackaging the many benefits of fossil fuels. The Heartland studies also expose the U.N.’s repeated failures to find credible evidence linking human activity with climate change.

That’s the kind of information the Biden administration, and its allies in the press, do not want widely circulated as it unsettles the very premise of their “Green New Deal” type regulatory projects. Almost every government power grab flowing out of the Biden White House has been advanced under the banner of climate change. The so-called “Inflation Reduction Act,” for instance, is overloaded with all kinds of green energy directives including taxpayer subsidies for wind, solar, and electric vehicles. The Competitive Enterprise Institute, a Washington-based think tank that favors regulatory reform, has identified roughly $60 billion in funding for “Environmental Justice” programs in the legislation that could open the door to “fraud, corruption, and waste” at taxpayer expense.

The new Republican majority in the House now has the opportunity to conduct oversight into how these funds are used and allocated. House members who are devoted to combatting the White House climate change agenda should extract firm commitments from their next House speaker with an eye toward regulatory relief. Otherwise, what’s the point of being in the majority? There’s more.

Republicans should also pick up on their prior investigations into the role foreign agents have played in shaping U.S. energy policy. In 2018, former Rep. Rob Bishop, R-Utah, then chairman of the House Natural Resources Committee, and Rep. Bruce Westerman, R-Ark., then chairman of its oversight and investigations subcommittee, sent letters to environmental advocacy groups inquiring about their relationship with China. In their correspondence, the congressmen asked the groups if they were in compliance with the requirements of the Foreign Agents Registration Act. There are compelling reasons to revisit those inquiries.

But there’s now an added wrinkle. Advocacy groups that are either knowingly or unknowingly doing the bidding of hostile foreign powers can hit the ground running in 2023. The fossilized, career politician taking up space in the Oval Office has a special talent for standing on the wrong side of history. The sad reality here is that any new efforts made to cajole the executive branch into constraining and restricting America’s economic and military assets would be superfluous.