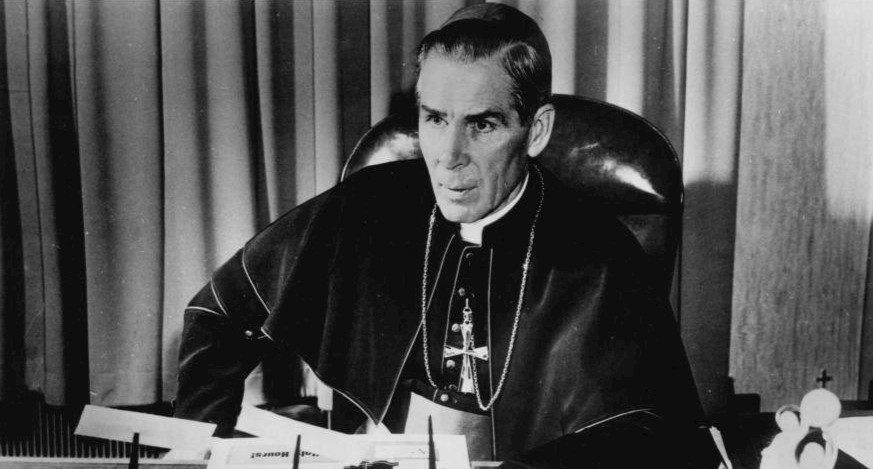 Communism and the Conscience of the West

Born on the Midwestern plains of El Paso, Illinois, in May 1895, Fulton J. Sheen was ordained a priest in 1919 in the Catholic Diocese of Peoria and was soon on his way to becoming one of the most remarkable Americans of the twentieth century, and, undoubtedly, the most widely known and respected American Catholic ever.

Throughout the 1930s, Sheen was heard nationwide on his Catholic Hour radio broadcast, which began in 1930. By then, most Americans had a radio, and millions were tuning in to hear this priest. Protestants as well as Catholics admired Sheen. Television executives duly noted his mass appeal and great communication skills. And as the new medium of TV boomed in the 1950s, Sheen soon boomed with it.

During the 1950s, Sheen appeared on television through his immensely popular show, Life Is Worth Living, where he entertained and informed with his wit and knowledge. By April 1952, Sheen was on the cover of TIME magazine. He won the 1952 Emmy Award for “Most Outstanding Television Personality,” defeating superstars Jimmy Durante, Lucille Ball, Frank Sinatra, Arthur Godfrey, and newsman Edward R. Murrow. At the award ceremony, the winsome priest quipped, “I would like to thank my writers: Matthew, Mark, Luke, and John.”

It was classic Sheen. It was what made him so likable.

Two decades after his death in December 1979, a poll by the website Daily Catholic, with 23,455 participants, asked respondents to name the twentieth century’s most influential Catholics. Sheen was the only American atop the list. He joined Pope John Paul II, Mother Teresa, and Padre Pio among the top four choices. (Notably, the other three individuals today are officially recognized saints in the Catholic Church. Sheen’s process for canonization is underway.) The Catholic Almanac in the year 2000 rightly described Sheen as “perhaps the most popular and socially influential American Catholic of the 20th century.” He was not only the most famous Catholic of the century but also, as the leading Jesuit publication America editorialized after his death, “the greatest evangelizer in the history of the Catholic Church in the United States.” (I highly recommend Thomas C. Reeves’s America’s Bishop: The Life and Times of Fulton J. Sheen, published by Encounter Books, as the best biography of Sheen.)

Sheen was extraordinarily popular not just because of his radio program, TV show, and sermons but also for his blistering attacks on communism, particularly the prime enemy of the world in his day: atheistic Soviet communism.

Sheen dramatically forecast that Soviet communists had “put before the world a dilemma,” an “apocalyptic” one: “They have thrown down the gauntlet to the world. The voice is either brotherhood in Christ or comradeship in anti-Christ.” Communism, he said, was inspired not by the spirit of Christ “but by the spirit of the serpent…. The Mystical Body of the anti-Christ.” He called communism “a groan of despair” and the Soviet Union “the most anti-Christ nation on the face of the earth.” He said it was fitting that Soviet communism’s emblem was “a rotted corpse, the body of Lenin — a perfect symbol of that to which all communism must lead us all, unto dust, unto dissolution, unto death.”

All of which brings us to the book under review.

Among his messages against communism, and his many books and writings, in 1948 Sheen delivered perhaps his best treatment: Communism and the Conscience of West, published by Bobbs-Merrill. It was a profound work that displayed the remarkable breadth of his knowledge and integration of theology, philosophy, politics, science, history, literature, and even language, all exhaustively documented. It ought to be required reading for anyone studying communism, the Cold War, the Soviet Union, and, especially, the Marxist assault on religious faith.

I was first introduced to the book by Bill Clark, who became President Ronald Reagan’s most important adviser in the strategy to defeat Soviet communism and win the Cold War. I was Clark’s biographer. I asked Clark if any particular books had most influenced him in the late 1940s, as he considered seminary and his ultimate career calling of fighting communism. He pointed to two of Sheen’s works, Peace of Soul and Communism and the Conscience of the West (he also pointed to Thomas Merton’s Seven Storey Mountain, likewise published in 1948, and endorsed by Sheen).

Communism and the Conscience of the West has long been out of print. But now, wonderfully, it is back in print, courtesy of Catholic publisher TAN Books. And with sympathy toward communism strangely on the rise, including in Sheen’s beloved home country, and with Catholic publications like the Jesuit-run America magazine bizarrely publishing articles with titles like “The Catholic Case for Communism” (July 2019) — adorned with an accompanying photo of a grinning Pope Francis being handed a “communist crucifix” by the president of Bolivia — a reissue of Bishop Sheen’s book seems inspired and truly providential.

The book opens with a crucial theme of Sheen’s, namely, that the problem with communism and Russia “is not primarily economic or political but philosophical: it revolves around the nature of man.”

That’s a crucial point that was made by popes in Sheen’s time and after, especially popes John Paul II and Benedict XVI, both of whom said that communism fails not just economically or politically but anthropologically. In his classic encyclical Centesimus annus, from May 1991, John Paul II stated: “[T]he fundamental error of socialism is anthropological in nature. Socialism considers the individual person simply as an element, a molecule within the social organism, so that the good of the individual is completely subordinated to the functioning of the socio-economic mechanism.” Socialism assumes that man’s problems can be solved by bread alone — and yet, as Jesus Christ told Satan, man does not live by bread alone. As Augustine said, we all have a God-shaped vacuum that God alone can fill. Not a dollar-signed vacuum. We crave the divine manna of heaven.

Sheen drove home that message in his book. He noted that communism was a “distortion of the true nature of man,” a “dehumanization of man that [makes] him a social animal for whom an economic machine is the total meaning of existence.” This false “philosophy of life” offered by Marxism-Leninism was made far worse by its complete rejection of God. And, of course, communism was just that: a rejection of God.

As Sheen put it, “The truth on the subject is that communism and atheism are intrinsically related and that one cannot be a good Communist without being an atheist and every atheist is a potential Communist.” He quoted Marx: “Communism begins where atheism begins.”

In Communism and the Conscience of the West, Sheen cleverly turned Marxist phrases on their head. He showed how communism, rather than religion, is an opiate of the masses. (The prominent intellectual Raymond Aron would cleverly title his 1955 book The Opium of the Intellectuals.) Sheen exposed the religion-like nature of Soviet communism: the “preaching” of Lenin, the “apostles” of Marx, Stalin’s cult of personality.

Sheen commended the Roman Catholic Church for its long, unwavering role in confronting communism. “The Catholic Church is sometimes praised for its opposition to communism,” he wrote. “This compliment is deserved, for the Church is the only solid moral force in the world that has been consistently opposed to the new barbarism.”

That began as early as 1846 — two years before the Communist Manifesto was even published — with the issuing of Pope Pius IX’s encyclical Qui pluribus, which stated that communism is “absolutely contrary to the natural law itself” and, if adopted, would “utterly destroy the rights, property, and possessions of all men, and even society itself.” Qui pluribus stated that communism was a “dark design” of “men in the clothing of sheep, while inwardly ravening wolves.” The encyclical warned of communists: “[A]fter taking their captives gently, they mildly bind them, and then kill them in secret.” The writings of communists were “filled with deceit and cunning” and “spread pestilential doctrines everywhere and deprave[d] the minds especially of the imprudent, occasioning great losses for religion.”

In Sheen’s day, and through popes such as John Paul II and Benedict XVI, the Catholic Church fearlessly and eloquently fought this good fight against communism. (Francis has been silent on the issue — a total failure.)

Sheen dedicated Communism and the Conscience of the West to Russia’s conversion and advised that Christians pray daily for Russia: “It is not Christian to wish for the extinction of Communists, though it is most Christian to pray for the evaporation of communism.” Sheen urged that the Russian people — for whom, he said, “atheism is not natural” — take heart that Christ’s tomb is empty, while Lenin’s tomb is not.

Fulton Sheen’s book remains to this day a sophisticated and timeless dissection of communism, long after his death over forty years ago. Sheen’s wit, mastery of metaphor, and fascinating historical parallels shine through.

Communism and the Conscience of the West has been a lost gem. Thanks to this reissue by TAN, it has been unearthed for a new generation. Americans today need to know Bishop Fulton Sheen and his message, and they need to know this book and its message.