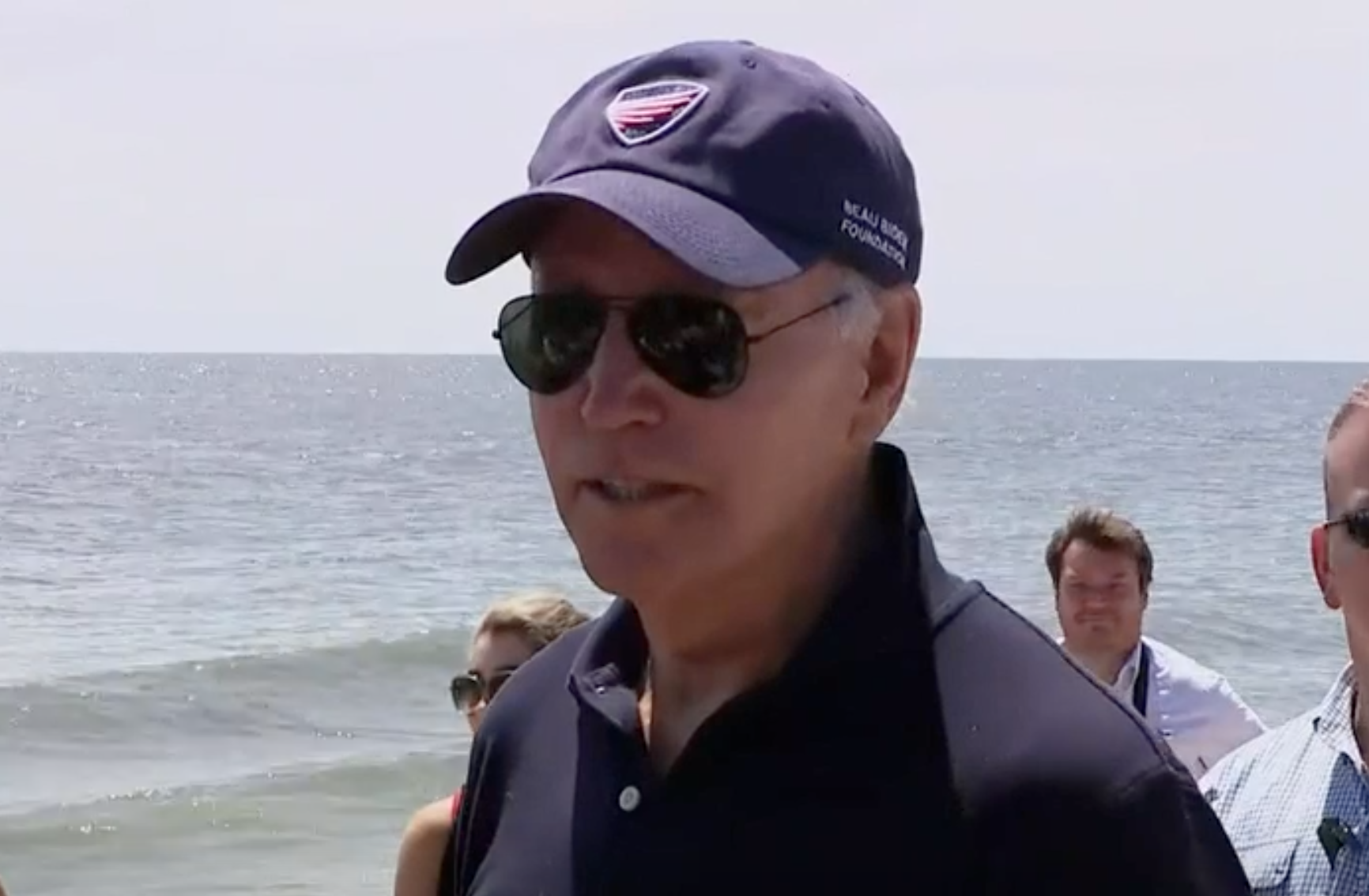 First, he fell off his bike, which was a national embarrassment. Then it got worse.

That’s what Joe Biden’s three-day weekend vacation back home in Delaware amounted to, proving that it doesn’t quite matter where he is — he’s capable of damaging his office and the country it presides over from anywhere in the world.

It was nine minutes of abjectly absent leadership. Here — see for yourself…

There is so much awfulness here it’s hard to know where to start. We could pick anything. But we’ll just go through it sequentially.

There’s that old-man-with-poopy-Depends walk that he puts on display everywhere he goes. It’s the worst presidential body language in the television age, and yet his handlers insist on putting him in front of the camera to show it off. Two words come to mind: elder abuse.

You’d feel sorry for him, but then you hear him talk and attempt to discern some sense of reality or cognition from the words which emanate from his mouth, and then sympathy becomes difficult.

Then you get the lady who wants to put her daughter in a picture with Biden right after another fresh wave of publicity about his daughter’s diary, which essentially accuses him of molesting her, hit the airwaves. Because THAT was spontaneous and real and not a damage control play by the White House at all.

Then he waddles up to the press gaggle after getting a verbal tongue bath from Not A White House Plant Lady At All about all the wonderful things he’s doing when he just fell to a 32 percent approval rating in the CIVIQS poll, and proceeds to give an insipid explanation for why he ought to have training wheels on his bike. Nobody cares why you fell off your bike, Joe — we just know you did, in front of the whole world, and you look weak.

He’s such a dunce that he thinks it’s important to explain his pratfall when the intelligent move is to ignore it unless you get asked about it in which case you acknowledge it was embarrassing and make a joke about it. This guy thinks we actually want the play-by-play of him falling off a bike.

You aren’t going to Ukraine, Joe. Just say it. Presidential travel schedules don’t change to include trips to a war zone. Not to mention the last time you got close to Ukraine you almost started a shooting war with a nuclear superpower.

Then he’s asked about a federal gas tax holiday, and he doesn’t have a clue about that — he muddles through that answer as well and says maybe he’ll have a decision on that this week. Of course, the federal government can’t afford a gas tax holiday any more than the American people can afford gas at current prices, and he knows that. But if he answered “the government’s too broke to give anybody a gas tax holiday” all hell would break loose.

Then he gets asked about the Apple Store employees in Maryland who chose to unionize and he launches into a defense of unions which is a good 25 years out of date. He says union workers in the trades — which the Apple Store clerks are not, so it’s off the subject of the question — are the best workers in the world. That’s kinda true sometimes, and it’s kinda not true as well. But he’s proud of those store clerks who are now going to be paying dues to support Democrat politicians in the midterms, something which gets lost in that exchange.

Then it’s a question on guns and the stupid John Cornyn gun deal, and Biden says it depends on the “courage” of “some Republicans” as to whether the deal will actually happen. Why is it “courageous” for politicians to screw over the people who voted for them? Then Biden goes into Creepy Whisper Mode as he leans in to brag about the “assault weapons ban” the state of Delaware has just passed (which is actually a whole lot worse an assault on the Second Amendment than he lets on). Then he begins babbling about “better gun regulation” across the country before he’s saved by another question.

He’s asked about Ukraine joining the European Union, which he says is likely to happen, and then his daughter attempts to pull him out of the press conference. Because keeping him lucid without a script for five minutes and change is about the limit and everybody knows it.

And now, it falls off the rails.

A reporter asks him about the recession that seems “more likely than ever,” and he objects to that. “Not the majority,” he says, and scolds her: “Don’t make things up.”

And Biden claims he’s just talked to Larry Summers about the subject, and intimates that Summers told him “there’s nothing inevitable about a recession.”

Except Larry Summers has already publicly said a recession is on the way.

“My best guess is that a recession is ahead. I base that on the fact that we haven’t had a situation like the present with inflation above 4% and unemployment beyond 4% without a recession following within a year or two. And so I think the likelihood is that in order to do what’s necessary to stop inflation the Fed is going to raise interest rates enough that the economy will slip into a recession,” Summers said on NBC.

During an appearance on CNN on June 15, Summers said he believed that a recession was likely due to an “overheated” economy.

It gets even worse from there.

Biden then babbles about how he thinks Medicare can help out people who need insulin, and how it costs people “a thousand bucks a week” to get it when it should only be $35. OK, fine, but he’s been talking about that for a year and a half now, ever since he rescinded a Donald Trump executive order which would have provided low-cost insulin to low-income diabetics. Shouldn’t this have already been done by now, and why is he bringing it up in the context of whether we’re in a recession?

And then he talks about how he thinks he can get tax increases “in the corporate area” because somebody “buying a yacht” doesn’t help the economy. Tell that to the guys who work at the boatyard.

By the way, a big tax increase in the middle of a recession was one of Herbert Hoover’s key policy prescriptions. How’d that work out for him, d’ya think?

At this point, a merciful end to this steaming turd of a presser should have come even if Biden’s family had to physically drag him away. But nope — there was more.

Because Biden then began waxing poetic (or at least his best facsimile thereof) about the wonderful transition to electric cars the country is going to make, and then he brags that his team will be sitting down with the heads of the major oil companies to grill them about the profits they’re making while gas prices are so high.

And if you’re one of the heads of the major oil companies, you’re now going to boycott those meetings now that Biden is using you as a scapegoat for his terrible economy, or at least you will if you have any fighting spirit.

Biden then launches into Creepy Whisper Mode and explains that Big Oil has “9,000 leases” for exploration on federal land, which is a thoroughly dishonest Democrat talking point — when oil companies take out an oil lease, they’re doing it on the chance it might contain enough oil to make it economic to drill on that land or area of water. But those calculations involve lots of factors — including things like environmental regulations and other political/governmental risks. So when they don’t drill those leases, it’s because the math doesn’t work. Joe Biden can barely spell math, much less do it. And there isn’t an oil company in America that would ever have hired him to run its operations.

Biden then makes that point clearer by griping about how oil companies aren’t refining enough oil. Well, sure — maybe that’s because feeding more oil into those refineries involves transportation, and his administration’s destruction of the national supply chain and specifically the trucking industry plays a part in that. Not to mention what he’s done to pipeline construction.

He doesn’t talk about any of that and the pet reporters in the press gaggle don’t ask about it — because not a single one of them knows anything about the oil business.

What he does talk about is how in five or 10 years (not really) we’ll be transitioning away from gasoline and therefore the oil companies don’t want to invest in expanding refining capacity, and he wants them to explain why that is. One is reminded of Karl Marx’s failed attempts in the 1850s and 1860s to convince the European bourgeoisie to kill off the aristocracy so that they could then in turn be slaughtered by the proletarian revolution Marx was so sure would come. The bourgeoisie, even before there was ExxonMobil, wasn’t too enthralled with that plan.

And finally he’s asked about something else which launches him into what would have been a lecture about his promotion of an “international flat tax.” Otherwise known as the international global minimum tax, an idea that would insulate his government from the economic effects of pricing it out of the mainstream on taxes by removing tax havens. That’s a stupid plan for lots of obvious reasons, and as he begins prattling on about it, his daughter and granddaughter finally get out the hook and drag him away.

About five minutes too late.

We really, really can’t have two and a half more years of this kind of doddering, babbling ignorance. Biden’s handlers, who are fairly openly admitting he’s unsustainable as president, have got to shut him up before the nation’s confidence is totally shattered.

It’s probably too late for that. But at least we can stop pouring gasoline on this dumpster fire, can we not?