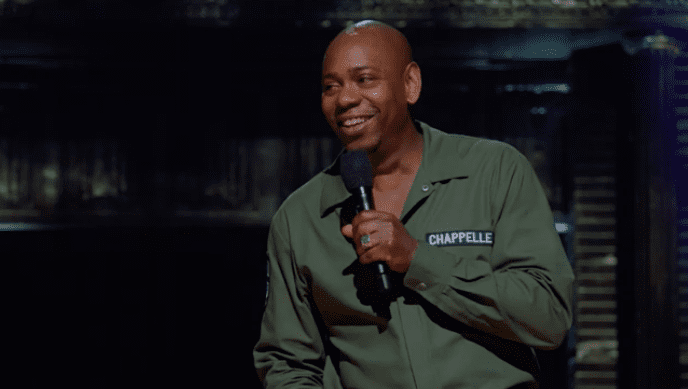 Laughs never come so hard as when some authority — a vice principal, a parent, a coach — sternly lectures, “That’s not funny!” This in part explains the rolling-on-the-floor hysterics induced by Dave Chappelle’s Netflix special, Sticks and Stones.

The four-minute bit on “Juicy Smolier,” a French actor attacked by racist and homophobic, MAGA-hat wearing bigots on the streets of Chicago on the coldest night of the year, ranks as Chappelle’s funniest bit since his eponymous Comedy Central show. In his special, he labels those referred to by an ever-expanding acronym as “the alphabet people” (Does he read Spectator A.M.?). He offers an interesting take on abortion: “Ladies, to be fair to us, I also believe that if you decide to have the baby, a man should not have to pay,” he tells a stunned audience. “If you can kill this mother—er, I can at least abandon him. It’s my money, my choice.”

Despite the standup performance creating as big of a buzz as anything since Eddie’s Murphy’s Delirious, the joke police hate it. Atop Chappelle’s two Emmys and Grammys, Harvard gave him a W. E. B. Du Bois Medal, and the John F. Kennedy Center for the Performing Arts announced plans to recognize him with a Mark Twain Award for American Humor. That was then. This is now.

The chasm between popular appeal and critical panning recalls the 2016 presidential election. The media waged an unrelenting negative campaign against Donald Trump that surely represented the largest in-kind political donation in history. The people rebelled. Our betters are worse at getting us to do as told.

The cultural guardians created taboos. They gave immunity to certain groups, people, and causes from becoming punchlines. They outlawed noticing difference. But comedy always crosses lines, mocks authority, and makes fun of difference. In the spirit of Monty Python ridiculing zealous clergy through the Spanish Inquisition or stuffy English bureaucrats through its Ministry of Silly Walks, Chappelle finds comedy in the humorless powerful. And the audience, conditioned by social pressure, nervously giggle before exploding — the end result of any great pressure. Like any act of subversion, it exhilarates.

The critics corrupt their purpose. They judge comedy not by the laughs it provokes but by its political implications. Given the guardians’ push to shut down cake shops not over health concerns but because of the baker’s religious views or to put football players on the cover of magazines based on their sexuality or their body’s position during the national anthem rather than their on-field accomplishments, the rigid, cultish reaction of critics to a clearly hilarious performance should not surprise. People obsessed with politics allow it to govern their judgment. When Chappelle, in a 2017 special, ridiculed Donald Trump for attempting to rescue American jobs from China (“So iPhones can be $9,000?”), supporters of the president not infected by this total-politics mindset laughed. Has politics become so total that audiences respond to a joke out of ideological solidarity rather than its inherent humor?

The crowd’s response to Chappelle suggests otherwise. But guardians, slaves to paychecks and lacking the talent to survive professional suicide like Chappelle, succumb to social pressure by exerting obligatory social pressure in depicting the spectacular as a dud. In laughing so hard, their cultural lessers engineer an emperor-has-no-clothes moment, when not only do untouchables become punchlines but in a broader sense the joke police do, too. The people in the seats grasp the meaning of “sticks and stones.” The hectoring professional reviewers, trying their best (and failing) to exile Chappelle to funnyman Siberia, do not.

A totalitarianism so fragile that it thrives off of demanding apologies and constricting the bounds of humor falls by unapologetic comedy. Even tyrants knew enough to leave their court jesters alone.