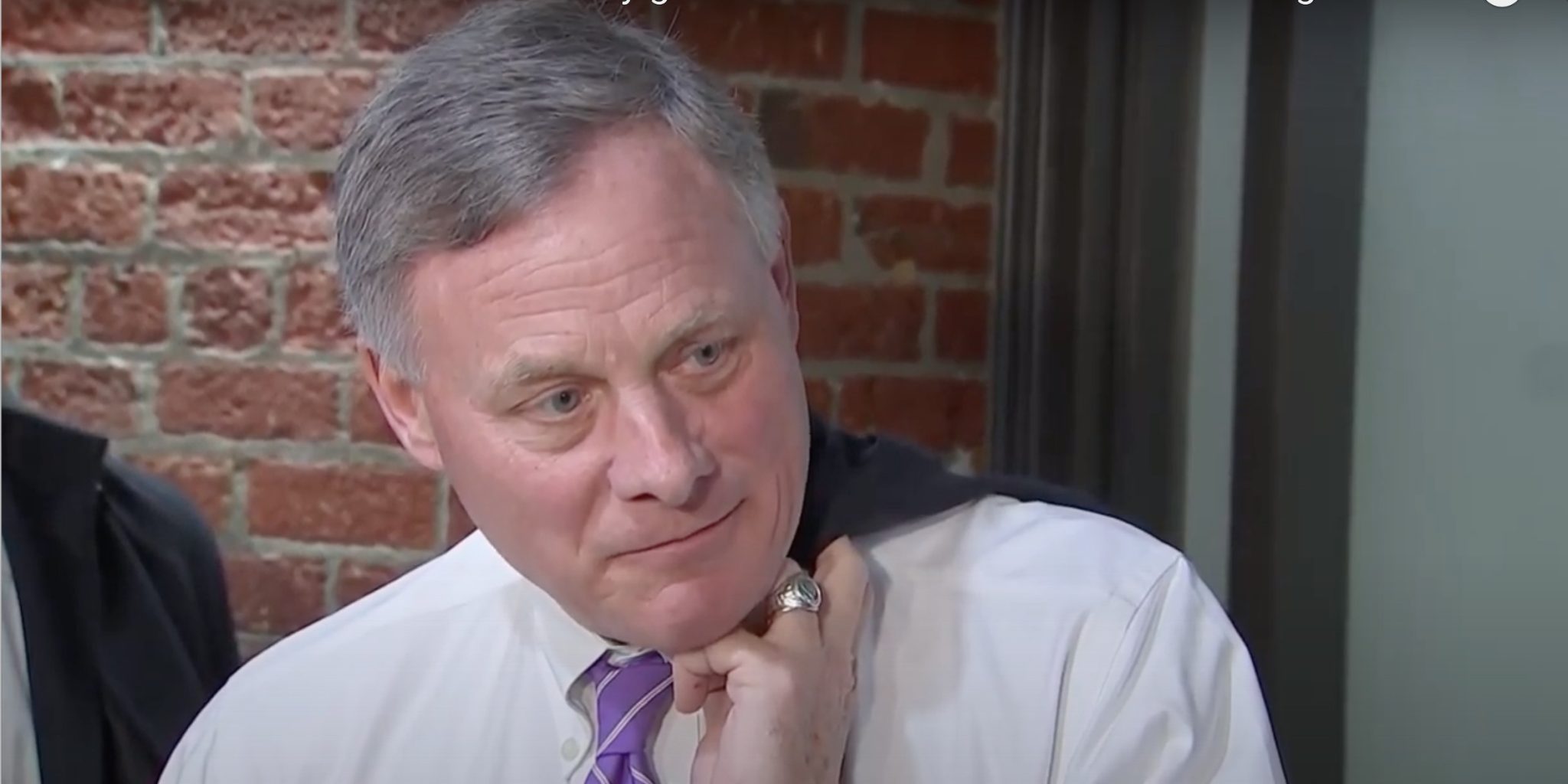 New revelations of the perfidy of Obama administration officials and government careerists in framing Gen. Michael Flynn and fomenting the Russian collusion hoax have cast a harsh light on Capitol Hill.

It is clearer than ever that the chairman of a legislative committee overseeing national intelligence misled the American public and, by undermining the Trump administration’s ability to govern, harmed our national security.

What’s more, we’re not talking about the odious Rep. Adam Schiff (D-Calif.), whose perfidy at the service of partisanship and ideological madness is obvious. We’re talking about the nominal Republican who up until a few hours ago was chairman of the Senate intelligence committee, North Carolina’s Richard Burr.

Schiff’s conduct has been what one would expect of a Nancy Pelosi protégé.

Burr’s is quite a different case. If one imagines a Forrest Gump–like cipher as putty in the hands of K Street lobbyists, that is the portrait of Richard Burr. For more than a quarter-century of ineffectiveness in public office, he has been maintaining the convenient profile of a nonentity while accumulating wealth and power.

In 1994, the tobacco lobbyists in Washington needed a candidate for an open House seat in their holy-of-holies, Winston-Salem. They hand-picked — and quite possibly flue-cured — Burr, a 38-year-old lawn mower salesman and graduate of the Cigarette City’s R. J. Reynolds High School. The national Republican landslide handed the seat to the young man. The tobacco interests secured the freshman congressman a seat on the panel that oversees their industry, the commerce committee. Freshmen almost never get assigned to this committee.

After a decade of faithful service to the coffin nail manufacturers, Burr moved up to the Senate in 2004. Following the Republican midterm victory in 2014, Senate majority leader Mitch McConnell (R-Ky.) installed Burr, who has no military, diplomatic, or other national security experience, as chairman of the intelligence committee. This was a feel-good moment for those who sentimentalize democracy. It was affirmation that in our post-Tocquevillian land of liberty, equality, and fraternity, any boy or girl could grow up to be custodian of the national security sieve known as the Senate intelligence committee.

Burr at last has attained his 15 minutes of fame for being in the soup with federal prosecutors for suspected crimes of using non-public information to make stock transactions. The investigations began after Burr, the recipient of daily classified intelligence briefings on the coronavirus pandemic, dumped as much as $1.7 million in stocks in February, before the stock market plunge precipitated by traders who had not had access to Burr’s national security secrets. This week, the FBI confiscated his cell phone as evidence, after which raid Burr stepped down from his chairmanship.

For many years while Burr was watching his stock portfolio grow and was coasting through a charmed existence on Capitol Hill, Flynn was on duty in the combat zones of Iraq and Afghanistan as the senior military intelligence officer.

For more than three years, Burr has either ineffectively defended, or actively harmed, Gen. Flynn and other victims of John Brennan, James Clapper, James Comey, Susan Rice, Joe Biden, and Barack Obama in what Attorney General William Barr has called “one of the greatest travesties in American history.”

In marked contrast to Rep. Devin Nunes (R-Calif.), who was chairman of the House intelligence committee before the 2018 elections, Burr has been a willing dupe of the Democrats and the Deep State. Instead of clashing with Sen. Mark Warner (D-Va.), the slimy senior Democrat on the intelligence panel, Burr always has behaved obsequiously towards the Senate’s Adam Schiff Tweedle-Dee.

Burr was asleep at the switch or worse when James Wolfe, his committee’s director of security, had a years-long affair with a college-age newspaper writer who took runner-up honors from the Pulitzer Prize committee for her — surprise, surprise! — publications of leaks from Burr’s committee denigrating Gen. Flynn and promoting the Russia hoax. The leaker went to prison, but not before Burr demeaned himself and the Senate by begging the sentencing judge to keep the criminal out of the slammer. This disgrace was the moment when Burr should have been removed from his chairmanship.

Unlike Devin Nunes, Burr never accorded fairness to Flynn. Today it should be clear that Flynn was targeted by Team Obama not because he is dishonest, but because he is a truth-teller.

Flynn enraged Obama and the national security establishment when he dared to tell the truth about the war in Afghanistan.

In an extensive interview with the special inspector general examining that war, Flynn said, “From ambassadors down to the low level [they all say] we are doing a great job. Really? So, if we are doing a great job, why does it feel like we are losing? There is corruption in reporting and not just corruption in the theft that occurred … That also includes from the State Department. There is no way that over the years, to include this year [2015], that we can say things are wonderful.”

Flynn’s candid remarks were not made public until after his dismissal as President Trump’s national security adviser. But surely, within the government, they were known to Barack Obama, Joe Biden, and to Trump appointees who had the knives out for Flynn, such as Bill Kristol’s one-time choice for president, Gen. James Mattis.

While Burr, the Country-Club Republicans, the sob-sisters of the Michael Gerson type, and the bellicose band of Kristol’s Kind-of-Blue-State persuasion were doing their part to throw the decorated general to James Wolfe and the other wolves, a Republican House member proudly shared a stage with Gen. Flynn following Flynn’s guilty plea.

Unsurprisingly, this House member, who represents conservative, rural northwest Iowa, faces a primary challenge from a candidate bankrolled by the national corporate lobbyists and other outsiders who have probably never been within a four-hour drive of Sioux City.

The House member is Steve King, a conservative who has represented his corner of Iowa since 2003. He and Flynn both attended the annual conference of Phyllis Schlafly’s Eagles in St. Louis in 2018, where each was presented an award for public service. I attended the conference and had conversations with each of them. I have met a boatload of congressmen over the years; Steve King gave a better impression of decency and thoughtfulness than most of them.

As for the conversation with Gen. Flynn, who was accompanied by his gracious wife and by his son, who had been threatened with indictment by Comey’s dirty, bluffing G-Men, I can report that each of them displayed Hemingway’s definition of courage: grace under pressure.

What Team Pelosi could not accomplish against King in 2018, RINOs want to do in 2020.

If one wants to have a deeper understanding of why both the Left and “moderate” RINO elitists hate him, listen to Flynn’s remarks praising the late Phyllis Schlafly and the pro-life movement. The bicoastal Establishment’s hatred of men such as Flynn has very much to do with their differences with him on abortion and other social issues, and not really much at all to do with actual issues of international affairs. They cannot abide a White House national security adviser who speaks warmly of the March for Life.

Since Donald Trump’s election, the Left and the RINOs have become utterly lazy about real issues of international politics. They have largely abandoned even going through the motions of performing any genuine, serious national security analysis and policy development. All they do is make strident noises, boiled down into inane tweets and headlines for CNN, the East Coast papers, and the infantile cyber-rag Foreign Policy, against every move Trump makes. If it’s a Trump policy, no other rationale is needed for it to be denounced in wild, apocalyptic terms. Call it the triumph of the shrill. Before Trump’s candidacy became a threat to their power, these well-larded phonies were all for improving relations with Vladimir Putin’s Russia.

Hatred of Steve King also is based on his pro-life and other conservative social positions. King is well-liked in his district. During the Democratic wave election of 2018, King won reelection while Democrats defeated Iowa’s other two Republican incumbents, whom the Establishment had considered safer. This was despite massive expenditures — almost four dollars for every one of King’s — by the left-wing Democratic challenger.

What Team Pelosi could not accomplish against King in 2018, RINOs want to do in 2020.

Immediately following King’s reelection in 2018, the Republican House caucus caved in to a heinous smear campaign against the congressman. They were frightened by hit pieces in the New York Times falsely claiming King to be a racist. This is the sort of thermonuclear flak from Big Media that Donald Trump faces and stares down every day.

But the wusses of the House Republican caucus could not overcome their fear of being bad-mouthed by dishonest leftists. They made fools of themselves by voting to remove King from his committee assignments. At the same time, Republican Senate leader Mitch McConnell, who could not be bothered to deal with Burr’s malfeasance at the intelligence committee, joined in the RINO chorus against Steve King.

Real conservatives know how painful, and often embarrassing, it is to be a member of the Stupid Party because there is no alternative except the Evil Party. Republicans who are terrified into becoming “woke,” who team up with the Left on social issues, have a death wish, both figuratively and literally.

The RINOs are financing a primary challenger with a fount of corporate PAC money and funds from high-dollar donors. They have raised and spent more than King. The RINOs’ candidate has raised most of his money from outside the district; King has gotten most of his from within the district. The RINOs’ candidate has raised more money from Los Angeles than King has gathered from Sioux City. A RINO Super PAC — it should be called a suicide pact — is pouring even more money into its effort to defeat King and kill chances for a Republican majority. The dinosaurs of the useless U.S. Chamber of Commerce are wasting unsuspecting members’ money in the Chamber’s own campaign against King. Just think of an alternative universe wherein this “Republican” money would have gone to reelecting President Trump instead of trashing one of his most loyal allies.

Meanwhile, almost all of the big buckets of money collected by the Democrat who will face the Republican nominee in November have been from San Francisco, New York City, San Jose, and Los Angeles.

The Iowa Republican congressional primary is on June 2. The choice is clear. Steve King is one of those rare members of Congress who is in accord with the voters who nominated Donald Trump in 2016. His RINO opponent represents everyone and everything Republican voters repudiated four years ago. If the RINOs defeat King in the primary, theirs could prove to be Pyrrhic victory. Voters who would be fired-up to reelect King in November would be tepid at best as to rallying for the RINO cause.

Steve King is an Iowan, not a PAC man.

The primary likely will have a low turnout because of the coronavirus. Conservatives in Iowa and across the nation still have time to make a difference in a contest with huge implications for the future of the Republican Party.