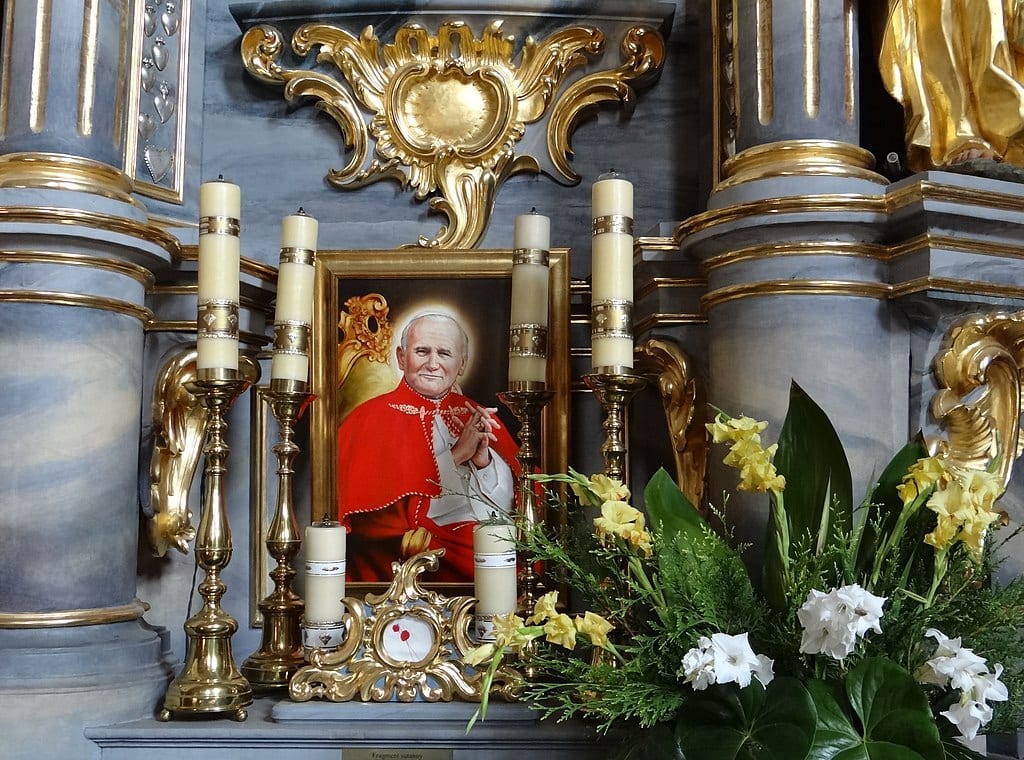 “I came here to do glory to the mother of God and also to spite those bastards.”

It wasn’t exactly what Jesus might have said, but one can sympathize with this sentiment from a Polish citizen long repressed by the jackboot of atheistic Soviet communism. This particular Pole is quoted in the new film documentary on Pope John Paul II and Ronald Reagan, The Divine Plan, directed by Robert Orlando (I’ve co-authored the companion book to the film).

This Polish gentleman in June 1979 attended one of the massive rallies that greeted Karol Wojtyla, by then Pope John Paul II, the first Polish pope, the first Slavic pope, the first non-Italian pope in four and a half centuries.

The Pole spoke to a bemused Western reporter interviewing those basking in the almost surreal, once-unthinkable glow of a Polish pope coming home to shake the foundations of the Marxist-Leninist state. Millions of jubilant Poles joined their suddenly famous native son in open defiance of the communist authorities. “Why are you here?” the reporter had asked. He got his answer: Giving glory to the heavens meant shaking your fist at the ideological brutes who denounced the heavens.

This June 2019 is a good time to remember this. Last week the world remembered the 30th anniversary of Tiananmen Square. And yet, just hours after Tiananmen, something else of major historic importance happened, and it happened in Poland: the people there held free and fair elections. The first round came on June 4, immediately after the Tiananmen protests. The second round would follow on June 18. These were, finally, the elections promised long ago at Yalta but had never happened.

The communists that June didn’t win a single seat. Mikhail Gorbachev knew what that landslide rejection meant. He said the “chaos in Poland” threatened an “ensuing break-up of the entire Socialist camp.” With those groundbreaking elections, a fuse was lit that would run all the way to the base of the Berlin Wall.

They were the first free and fair elections in the Communist Bloc. Solidarity candidates won 99 of the 100 contested seats, with an independent candidate winning the other. The communists were completely skunked. They paved the way for the presidential election of Lech Walesa a year later.

And that’s not the only anniversary for Poland this June 2019, which brings me back to that Pole giving honor to the Blessed Mother and spiting the communist thugs. That historic moment had come 10 years before those Polish elections, and in fact was a catalyst for those elections. It came June 1979, when Karol Wojtyla returned home as a (peaceful) conquering hero. He would launch what has been called nine days that changed the world.

The Polish pontiff arrived home on June 2, 1979. Church bells rang throughout the nation, further infuriating the authorities. And still worse for communists, the pope chose for his platform Warsaw’s historic Victory Square. The choice could not have been more powerfully symbolic. As secret police pressed in from all around the perimeter of the massive crowd, the Polish shepherd exhorted his flock to “Be not afraid.” He also stated definitively: “there can be no just Europe without the independence of Poland marked on its map.” The crowd was ecstatic.

My friend Marek Jan Chodakiewicz, today a Polish scholar and historian, was among those who made sure he didn’t miss the hometown boy that June.

Marek’s family had dealt with political goons all their lives. He’s the only male member of his family in three centuries not sent to jail, to Auschwitz, to Siberia, or wounded or killed on the battlefield. The women of his family have been equally tough. Marek’s grandmother was tortured by the Gestapo, the Soviet NKVD, and the Polish communist secret police.

“I come from a long line of freedom fighters, people who die for the cause,” says Marek. “So, I was raised not afraid and I, when I was a child, would challenge my teachers. I would tell them things against communism when I was 12 years old — when I was chucked out of school for the first time.”

Marek was 16 years old in June 1979 when he played hooky from high school to watch it all: “John Paul II was scheduled to make his first ever visit to Poland as pontiff, and we were told at school, don’t go.” They were informed that attending the rallies would be tantamount to cutting school. When that threat was shrugged off, the government’s teachers and administrators tried to scare students. Maybe a threat of being stampeded by a crazed mob would work. “We were then told, don’t even entertain a thought because it’s going to be like Mexico,” recalls Marek. “There will be a stampede like a bullfight, and they’ll scrape you off the wall. My teacher told me that.”

The communists were doing their damnedest at every level to undercut the pope’s visit. The regime sent a directive to schoolteachers instructing them how to characterize the papal visit to students. “The Pope is our enemy,” exclaimed the directive. “Due to his uncommon skills and great sense of humor he is dangerous.… Besides, he goes for cheap gestures in his relations with the crowd, for instance, puts on a highlander’s hat, shakes all hands, kisses children…. It is modeled on American presidential campaigns.”

Poles rejected such absurdities and intimidation. They could not have been more inspired and were openly defiant of the regime. They looked to spite those bastards.

“Of course, I cut school with a couple of friends,” recalls Marek. “The weather was beautiful and what I saw was a million-strong crowd. The best behaved, the best self-policed mass of human beings I have ever encountered. It was simply incredible. There was kindness, which was publicly surprising because communism also meant churlishness. There was love. There was expectation of a miracle, and the miracle came. A dude in a white suit and a little yarmulke, John Paul II. We loved it.”

Though fear theretofore had been everywhere, in everyone’s eyes, John Paul II told the Polish people to “fear not.” It was that, Marek said, that for him and for the million people he saw in Warsaw that day, and then millions more who would see the pope elsewhere during that trip, “was astonishing and incredible. For me, it was gratifying. It was just a miracle.”

In fact, Lech Walesa, Solidarity’s leader, would say of John Paul II’s visit: “He comes to Poland, and the twenty who followed me were suddenly ten million. It was a greater multiplication than the loaves and the fishes.”

The communists stared in horror as the crowd chanted not “we want Marx” but “we want God!” That was the Gospel they wanted, not what John Paul II and Ronald Reagan called “the false faith” of Marxism-Leninism. And it was that Gospel, proclaimed without fear by John Paul II, plus the stoic efforts of the likes of Ronald Reagan, of Margaret Thatcher, of the Solidarity movement, and more, that tore open the Iron Curtain.

Alas, that will bring us to another anniversary coming this fall, which the world will be acknowledging soon: the 30th anniversary of the fall of the Berlin Wall and collapse of communism in Eastern Europe. Much of the focus will be on that wall, but we must know and remember that its toppling was precipitated by the elections in Poland in June 1989 and by the visit of Pope John Paul II to Poland in June 1979. We must not forget those events nor the damage done by the ideological gangsters that were defeated and spited.