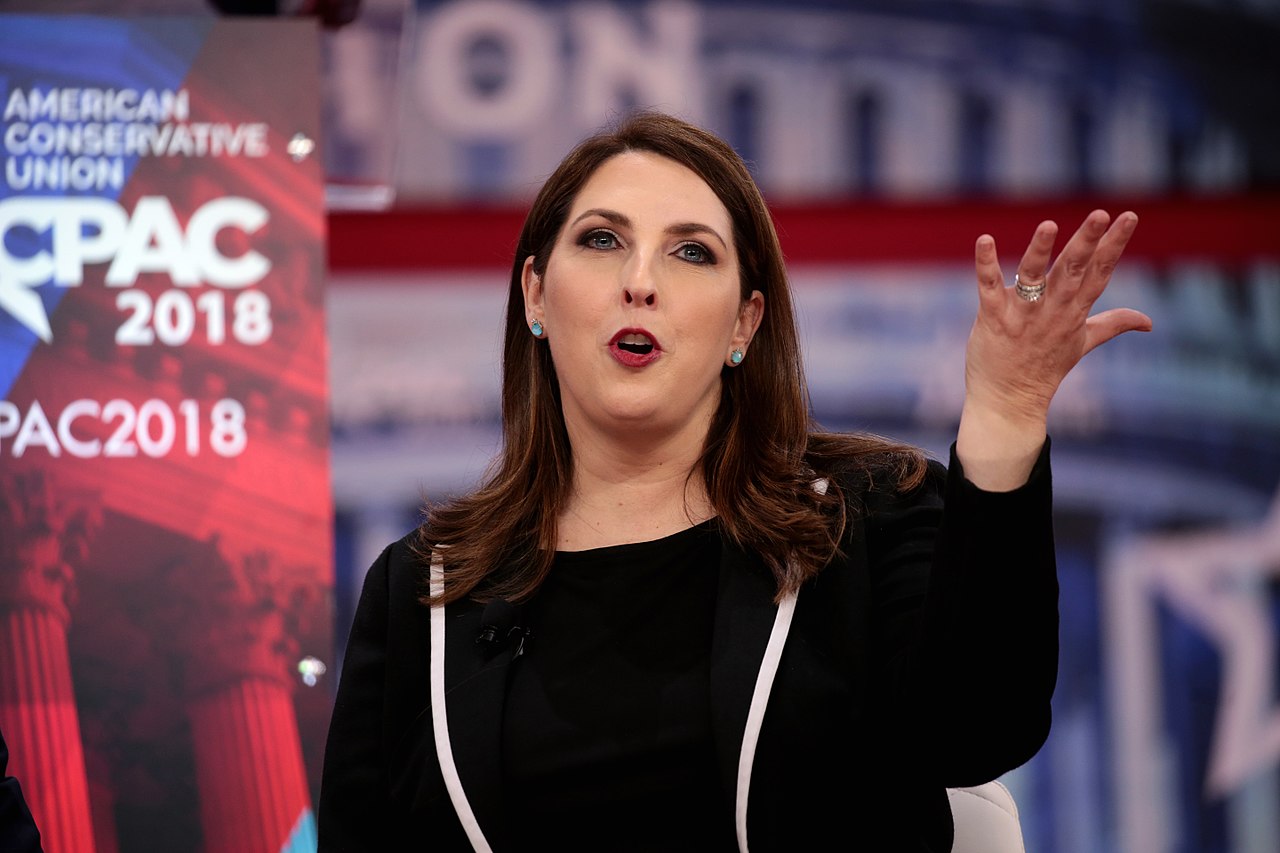 Illustrating that they won’t take their own side in a dispute, Republicans typically choose as their party chieftains hacks who betray little evidence of having read the GOP platform and even less evidence of supporting it. Current Republican National Committee Chair Ronna McDaniel falls into that category. She appears as conversant with the party platform as the late Bob Dole, who famously said that he never bothered to read it.

Like previous RNC chairs, many of whom now appear on Republican-bashing networks (the unctuous Michael Steele on MSNBC defines this group), McDaniel conceives of her role as a ratifier of the “uniparty” consensus. The GOP’s recent capitulation to the Democrats on gay marriage is Exhibit A of McDaniel’s mindset. She had signaled weakness to the Dems by tweeting out her enthusiasm for “Gay Pride Month” early in the Biden presidency. Those tweets alone disqualify her from another term as RNC chair, given that they reveal her basic contempt for the party’s platform, which is staunchly opposed to the LGBTQ agenda.

It is not as if gay marriage stands as a marginal issue. It goes to the center of the GOP’s supposed moral philosophy. Can anyone imagine the Democrats electing as party chief a figure who opposes the party’s platform on a substantial moral issue? That is inconceivable, and for a simple reason: Elite Democrats fervently believe in their platform. They would never dream of elevating a gay marriage foe to lead their party.

I once heard a GOP insider refer to McDaniel as a de facto lobbyist for the gay lobby who surrounds herself with gay figures from the flashy fundraising world. Cut from country club cloth, McDaniel, a niece of Mitt Romney, clearly views the religious Right as insufficiently woke and problematic. At the beginning of the Biden presidency, she indicated this openly through her outrageous tweets in honor of LGBTQ causes. But more recently, she has behaved more circumspectly and has even tried to throw members of the base off her liberal scent by feigning concern about the imposition of transgender propaganda on elementary school students. What a crock. After all, transgenderism grew out of the very gay causes McDaniel supports, causes that have long marinated in the subjectivism liberals used to assert that human beings have an inherent right to choose their sexuality and their sex. Does anybody really think a McDaniel-led GOP would stand strong against this transgender juggernaut, let alone more politically tricky issues? The moderates McDaniel represents may object to the most outlandish parts of the transgender agenda, but they still approve of much of it, particularly any transgenderism involving adults.

It appeared at first that McDaniel would sail to another victorious term as RNC chair, despite her role in the GOP wipeout in the fall. But now a few challengers pose a threat to her. A frequent guest on Tucker Carlson’s show, Harmeet Dhillon, announced this week that she is running for RNC chair. She pointed to the RNC’s ideological disloyalty to its base and addiction to losing as reasons for her run. “I am going to run for RNC chair,” she said. “And the reason is that, to play off of a famous catchphrase, Republicans are tired of losing, and I think that we really need to radically reshape our leadership in order to win.” Jabbing McDaniel, Dhillon said: “I think that the party needs to realize that the party has become a populist party. The base of the party demands populist messages that speak to them and not Chamber of Commerce messages, not neocon messages, not warmonger messages.” Dhillon added, “I’m afraid that the base of our party is not getting what it needs from our leadership.”

That is an understatement. GOP leadership isn’t even trying to advance the interests of conservative Republicans. To the extent that it seeks to win, the McDaniel wing does so on essentially liberal principles. So any victories it might achieve would be empty anyway. The donor and consultant class for the GOP fails to appreciate the fundamental purpose of politics, which is not simply to win but to win on principles central to the country’s recovery and strength.

McDaniel’s willingness to join the LGBTQ attack on the traditional family exposes the hollowness of her political vision. America can never regain its strength as long as the foundation of the state — the two-parent family rooted in God’s plan for humanity — continues to crumble.

That McDaniel even entertains the prospect of winning the RNC chair is a scandal in itself. The Democrats are called “evil” but not stupid. They would never immolate themselves by handing their party over to a critic of the fundamental moral tenets contained in their platform. Under McDaniel, the GOP, accurately dubbed by wags as the “stupid party,” has not only gotten stupider but also embraced the evil of the Democrats. The GOP should eject McDaniel into the outer darkness of MSNBC, where she can join other self-hating Republicans on panels that celebrate Democratic victories.