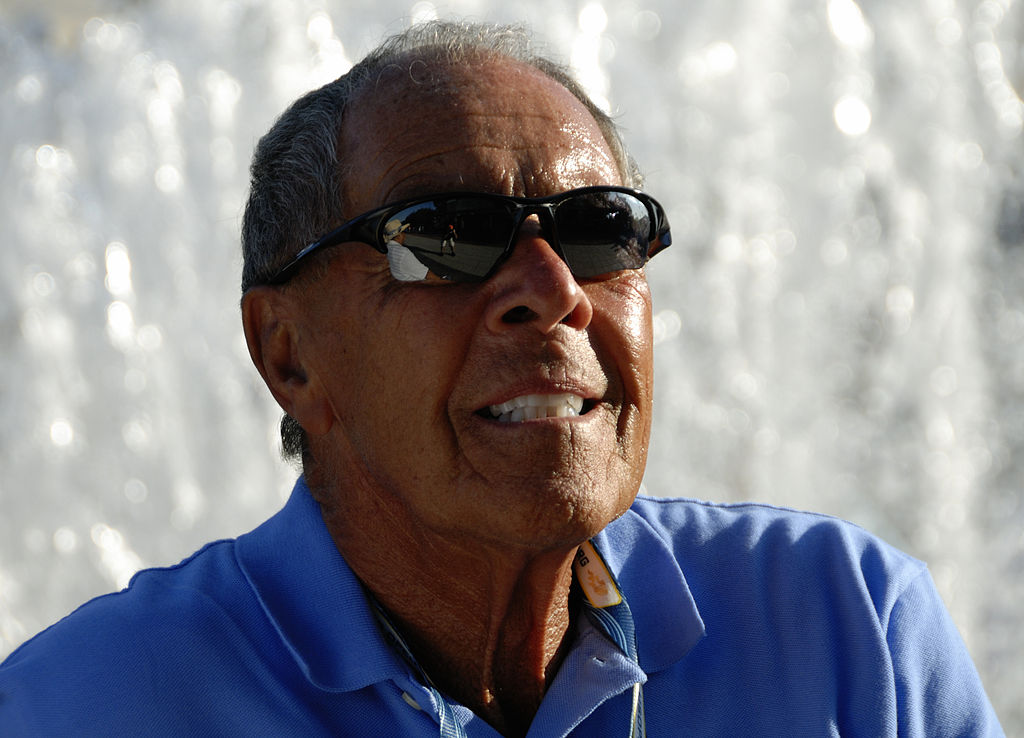 In a way, he was the personification of tennis. Year-round tan thanks to the Florida sunshine, a smile that went from sly to joyous, a frown that verged on a fit of temper before turning into the teacher’s patient nod just in time to reassure the student love endures, an exuberance that came out in boundless curiosity about everything and everybody, and a deep, contagious faith that you — you — can improve, get better, faster, stronger, fitter, more awake if you will just sit still and listen, study, learn, imitate, practice, and compete against your friends, against your coaches, against yourself — if you just do it all, why, “Yours is the world, and everything that’s in it / And — which is more — you’ll be a man, my son.”

Or a woman. Nick Bollettieri, who finally put his racquets away for good a few days ago, was as much for teaching and motivating girls as boys, and he saw many of both reach the No. 1 ranking that, he never stopped telling them, they earned by never-ever-quitting work, improving and adapting their games as the sport evolved. Not least due to his influence. Notwithstanding that he was not a great tennis player, never competed professionally.

He was a fine athlete, high school football star, college varsity, stayed fit and strong, slim as a gymnast to the very end, jumped out of airplanes (U.S. Army paratrooper), cool with zero affectation in those sharp court outfits and dark wrap-arounds that on him never looked retro, just right.

And that was the real trick, they said, of Bollettieri’s amazing success as a teacher and promoter of the sport: he got things just right for each and every kid he met and took under his wing (not cheap, either — but right) and passed on the lesson: get it just right, your forehand, your backhand, your baseline game, your net game, and then go to the next level and start over: work till you get it right.

Tennis is not basketball or soccer, but in Nick Bollettieri’s time it went from small circles to sports big time.

Just right meant just right for you. To be sure, his school and his assistant coaches held certain foundational notions, you would not quite say orthodoxies, about how to play this sport, but he was never against adaptation to a given young athlete’s innate gifts (or weaknesses), for they are facts of nature.

Teachers do this. He himself learned tennis on his own, then he made a study of it, the workload taken for granted, happily, dawn to dusk, from Florida to, well — wherever tennis is played.

If there is scarcely a place on Earth where tennis is not played, it is due to Nick Bollettieri (and a few others), who caught the wave and rode it for all it was worth to fame and fortune. By inviting students from all over the U.S., and then the world, to his academy, he made himself one its best salesmen.

Tennis is not basketball or soccer, but in his time it went from small circles to sports big time. Bollettieri did not only train champions; kids (and older) came to his camp and brought back a game and a training regimen and a way of being — gifts that last a lifetime.

Growing up in Pelham, New York, Nick Bollettieri went to college and the Army as was normal in the way normal used to be, and then thought about law school and enrolled at Miami, earning some money on the side giving tennis lessons on public courts.

He realized the country club idea of tennis, which he took for granted growing up, was never the whole picture. Pancho Gonzalez and Don Budge learned to play on California public courts and the legends of Australian tennis theirs on rough pitches they built on family farms in the outback.

But it is true most teaching pros were found, economic survival oblige, to stay in the hoity-toity places, and the truth of the matter is that Nick Bollettieri had never had the benefit of that sort of instruction. When he was public court “pro,” Bollettieri scarcely knew a forehand from a half-volley.

He studied and learned, got tips from English legend Fred Perry (who lived in Florida), books, and — the world was still a small place — landed a gig with the Rockefellers, accompanied some of them to their winter places in Florida and Puerto Rico, and, by the time the tennis boom got into full gear with the Opening of the sport in the early 1970s, he was ready with his dream (by then honed into a hard-nosed business plan): the boarding tennis academy. Born in Florida, the model was replicated around the world, where dreams would be squeezed into boot camps and emerge as careers.

The Nick Bollettieri Tennis Academy (eventually sold to IMG but managed by the founder until his last years) began with some decrepit motel rooms and a few courts; it expanded to 600 acres on which to learn baseball and many other sports — of which tennis remains the jewel.