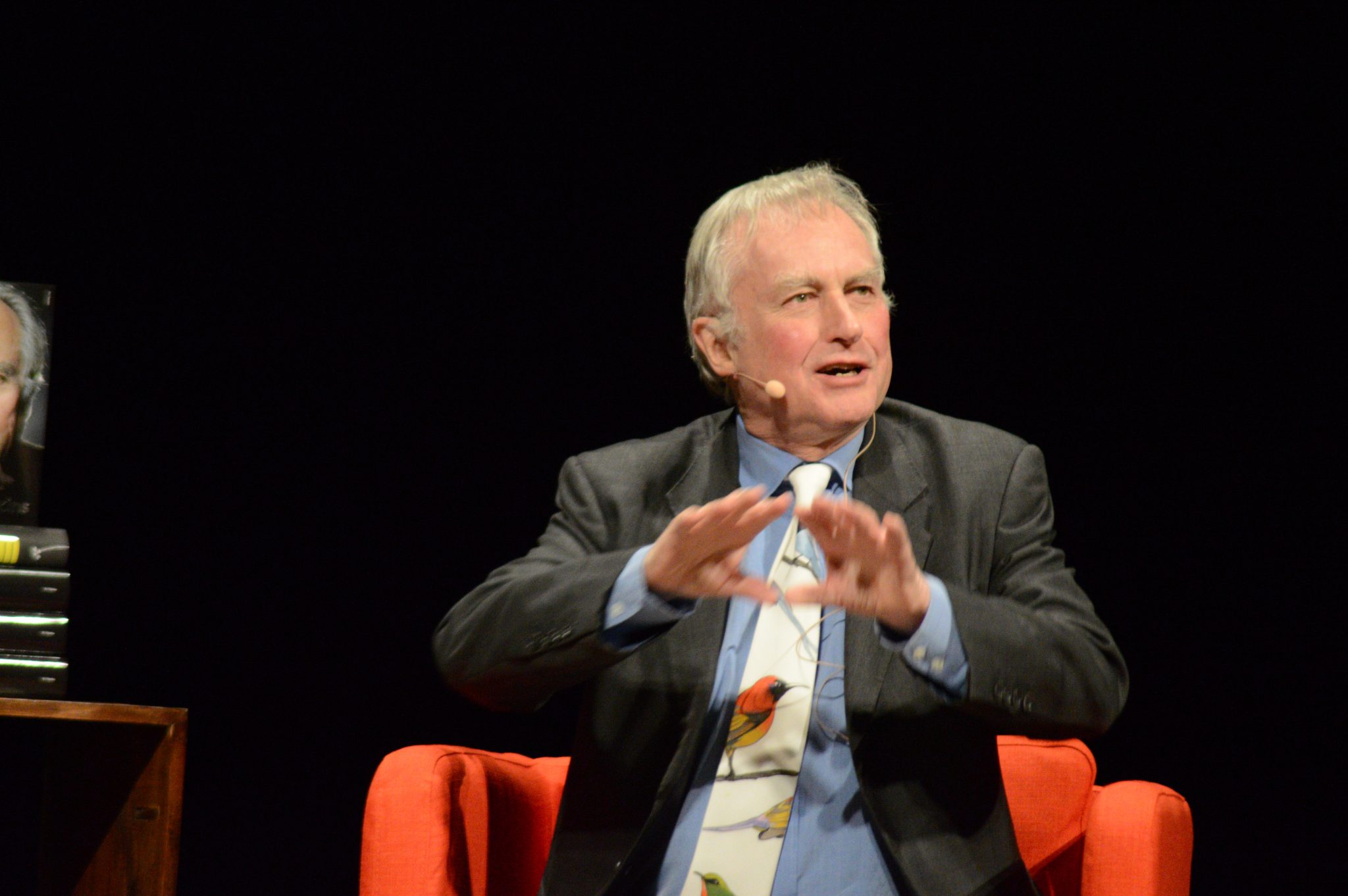 Note to reader: I submitted this article to Richard Dawkins prior to publication. His response: “I read it. Hated it.” You are duly warned.

“If you’re having some, yes, thank you.”

We sat in his living room, books and DVDs on a wide range of scientific topics stacked about here and there. He stood unsteadily and walked to his kitchen in a manner that suggested the effort required some concentration. A few minutes later, he returned with two potent cups of coffee, the small ones of the type Europeans prefer. He held them uncertainly in his right hand, his left arm immobile by his side. These were the lingering effects of a stroke he had suffered only a few months before.

I was worse. Having been hit by a car while cycling six months prior to this meeting, I was recovering from a plethora of injuries that included a broken neck, 12 broken ribs, and 19 broken vertebrae. Together we made quite a pathetic sight.

Contrary to his curmudgeonly public image, Richard Dawkins is a gracious host. This was not our first such encounter. By this time, the spring of 2016, I had known him for more than a decade. My organization, The Fixed Point Foundation, had sponsored a series of highly popular atheist versus Christian debates — Dawkins v. Oxford mathematician John Lennox, me v. journalist Christopher Hitchens, Princeton bioethicist Peter Singer v. author and political commentator Dinesh D’Souza, me v. Tufts cognitive scientist Daniel Dennett, and so on — and Dawkins had figured prominently in them. Together, we had mounted platforms from Oxford University to The Charlie Rose Show in New York City. (Curiously, this excellent debate between Dawkins and Professor John Lennox never aired. By the time I got around to asking Charlie Rose about it, he had been “canceled” by the #MeToo Movement.)

We were ideological combatants, each warring for the minds of the unconverted on what we both considered to be the most fundamental question of all: the existence of God. But there is something refreshingly honest about this sort of relationship. I make no pretense of liking his worldview any more than he does mine. This doesn’t mean, however, that I must dislike the man. Richard, an acquaintance more than a friend, is, if nothing else, intellectually honest, and I enjoy that immensely.

“AAI wants me to give a presentation at their conference next month,” he began. “But I don’t feel like I’m up to it. I fear I am still slurring my speech.” This was a reference to the Atheist Alliance International.

“You sound good to me,” I said. He gave me a dubious look, trying to decide if I was merely being polite or was truthful in my assessment of his progress. But this wasn’t flattery. He spoke somewhat slower, more carefully as you would expect, but I detected no slurring.

“I mean it. I think you’ll be fine. But if you’re anxious about it, tell them no.”

“They are rather insistent. I don’t feel like I can say no.”

“Then record it,” I suggested. “If you don’t like it, record it again. You can do as many takes as you like.”

The idea appealed to him, and he appeared to be considering it. I was gobsmacked. Where Madalyn Murray-O’Hair was a liability to their movement, Richard Dawkins had made atheism fashionable. Now these ingrates wanted a performance, stroke be damned. It seems belief in the soul, or the absence of belief in it, has some influence on how you treat your fellow man.

Richard Dawkins is no stranger to controversy. He is an atheist provocateur. And with 2.9 million Twitter followers, his commentary gets noticed. In addition to religion, he has weighed in on #MeToo, American and British politics, abortion, and a variety of other subjects, usually to the rapturous delight of his fans.

Yes, the atheists who loved every blasphemous line of his bestselling literary Molotov cocktail now want to cancel him because it seems he has gone a bridge too far. In a recent tweet Dawkins offered this take on transgenderism:

The scientist of whom British literary critic Terry Eagleton once said, “Imagine someone holding forth on biology whose only knowledge of the subject is the Book of British Birds, and you have a rough idea of what it feels like to read Richard Dawkins on theology,” was now addressing an issue in which his considerable expertise in biology actually mattered. More than that, transgenderism is a question where one might reasonably ask a biologist, especially one of Dawkins’s eminence, to adjudicate.

But reason will get you nowhere here. As if to prove the point of his tweet, proponents of the “cancel culture,” ideological terrorists that they are, lit their Twitter torches and mobilized. He was accused of “transphobia” and perpetuating hate.

I protest on Dawkins’s behalf. See that word “Discuss” at the bottom of his tweet? Dawkins was inviting debate. This is precisely what Christians did when Dawkins published The God Delusion. We celebrated him as a worthy opponent, bought his book, considered his arguments, and, well, had coffee with him from time to time. Moreover, we made him rich.

But the cancel culturists don’t debate. They don’t think. Not really. They are an atavistic — a word I acquired from Richard along with “gobsmacked” — reactionary faction hellbent on enforcing their rigid secular orthodoxy. Operating with the swiftness of a Stalinist show trial, the American Humanist Association (AHA) rendered its verdict on the recalcitrant 80-year-old: “Regrettably, Richard Dawkins has over the past several years accumulated a history of making statements that use the guise of scientific discourse to demean marginalized groups, an approach antithetical to humanist values.”

Just like that, the man who gave life to their movement was excommunicated, his 1996 “Humanist of the Year” award revoked. Did they find it “demeaning” when he said, “Faith is one of the world’s great evils, comparable to the smallpox virus but harder to eradicate”? Not at all. Statements of that kind had earned him the award in the first place.

The AHA is a nonprofit ostensibly organized around scientific principles and “free thought.” But thought, free or otherwise, is simply not permitted. Make no mistake about it, the “woke” mob, which is, ironically, at bottom atheistic, has all the trappings of a religion, albeit a bad one: faith in their irrational dogma, saints, inquisitions, holy writ, and, until April 19, a god. But it is the nature of men to rebel against their god, be he real or imagined, and while Dawkins was on the mountain chiseling tablets for the children of unbelief, in the valley below they were fashioning new gods, woke ones, that dispensed with the creeds of their old deities.

Having engaged public atheists like Dawkins for more than 15 years, I have long warned that they aren’t the ones to be feared. This is because they are largely products of a Christian culture and have inhaled deeply of its ethos, and that serves to restrain them. Hitchens, for example, with whom I maintained a warm friendship, was not willing to follow his atheism to its logical conclusion — that, to loosely quote Dawkins, we live in a cold, indifferent, pitiless universe in which the only meaning in life is that which we artificially give it. Hitchens loathed Peter Singer’s endorsement of infanticide even as he acknowledged that Singer’s view was logically consistent with atheism. Atheist though he was, there was still something of a Christian conscience at work in him. Not so with the latest iteration of atheist, be they what I call “philosophical atheists” like Dawkins or merely those who have absorbed atheism’s chief tenets in the absence of any substantive Christian instruction.

In Alfred Hitchcock’s underrated 1948 thriller Rope, a film deriving its central theme from Dostoevsky’s Crime and Punishment, Jimmy Stewart’s character, Rupert Cadell, impressed with nothing so much as his own intellect, spouts a lot of Nietzschean nonsense to his students on the artificial nature of morality, meaning, and human dignity. He ends his soliloquy with a discussion of the feasibility of the perfect murder. When Cadell’s students give action to his theories, he is naturally horrified, but it is he who gave them the intellectual tools for their hideous crime.

Similarly, the atheists to be feared are those who have taken to heart the teachings of their masters. Like Ivan in Dostoevsky’s other great novel, The Brothers Karamazov, they have arrived at atheism’s logical conclusion: “If there is no immortality, there can be no virtue, and all things are permissible.” This includes — among many other things — calling women men and men women and canceling anyone who dares to disagree with you.

This behavior is not incidental to the AHA, to atheism in general, nor to its most recent manifestation, wokedom. It is a product of unbelief. And that’s why the woke are as intolerant as every other atheist mob in history. From the Jacobins and the Nazis to the Bolsheviks and the folks over at the New York Times, dissent is regarded as a crime to be punished with impunity. But it is the atheists of the previous generation who have brought us here. The chickens, as they say, have come home to roost. Or, as our organizational tagline reads, “Ideas have consequences.” Indeed, they do.

“Have you read my latest book?” I asked, sipping my coffee.

“Every word!” Richard shot back.

I sensed a debate coming.