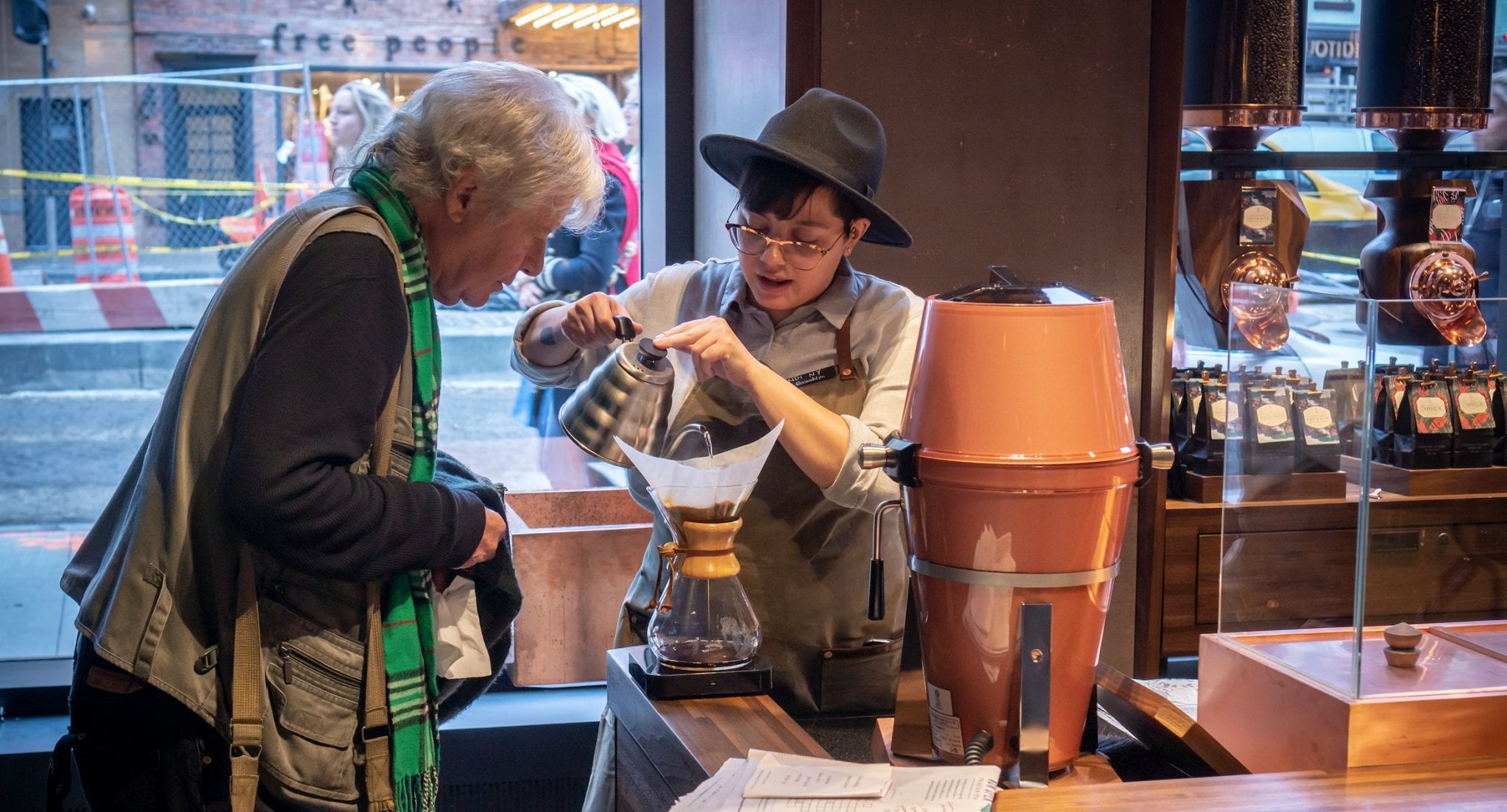 You are in a coffee shop. You have just ordered your tall, non-fat latte with caramel drizzle from the barista. The place isn’t too busy, so you strike up a conversation.

Your barista has longish green hair with red highlights pulled back into a ponytail, a ring in her nose, and ostentatious glittery things dangling from her earlobes. The barista’s eye makeup is serious, at Johnny Depp level. Neck tats are visible, and, from what you can see, a full-sleeve tattoo runs down one arm. The beginnings of a goatee appear to be sprouting on the barista’s chin. Skinny jeans and a billowy blouse fill out the ensemble.

You survey the scene but aren’t exactly sure what you’re dealing with. The barista is offering a sexual presentation of profound ambiguity.

The conversation is going smoothly until a certain part of speech makes its abrupt, initial appearance. You are forced to speak of the barista in the third-person singular form.

Which pronoun do you use?

In olden times — pre–first wave feminism — you could say “he” without any fear of correction. For centuries, the generic “he” encompassed both genders in its antecedent universe, and did so without controversy. Everybody — men and women alike — knew “he” meant “he and she,” just as everybody knew the term “mankind” included women.

Up until a few years ago, you could guess either “he” or “she” and have a 50 percent chance of being right. The gender binary was in full force back then, not appreciated by all but still of a puissance to control formal writing and speaking and the publishing world.

But now, the transsexual movement has appeared in popular culture and instantly vaulted to a place at or near the top of the hierarchy of grievance groups. When biological males feeling “womanish” can enter female restrooms without overmuch opposition and persons with male plumbing can outrace actual, anatomical females in high school track meets without triggering an avalanche of censure from established feminism, you know you have a tool of culture-transforming power. You have serious victim cred.

This transgender movement has taken a wrecking ball to the erstwhile firmly entrenched binary world. Facebook lets its users choose from any of over 50 genders for their home pages. There are, among others, “angrogyne,” “bigender,” the various “cis-” subcategories (“cis female,” “cis male,” etc.), “female to male” and “male to female,” “intersex,” “gender nonconforming,” “gender questioning,” “gender variant,” “pangender,” “trans-this” and “trans-that” (numerous options), “two spirit,” and — is this really necessary, Facebook? — “other.”

Clearly, the humble pronouns “he” and “she” cannot contain such multitudes. While useful when they apply, they are extreme binaries and ignore literally scores of new categories that have sailed far out into the Great Gender Ambiguity.

Some have offered new sets of pronouns — “ze” and “zir” and “zem” and “zeir” can be trotted out for the nonbinaries, as can “hy” and “co,” not to mention the “xe” family: “xe,” “xir,” “xem,” and “xeir.” All are suitable labels for Genderqueer Nation.

The great bailout, long-poised in the subversive underground waiting for its moment of grammatical weakness to pounce, is the singular “they.” It solves the clumsy “he or she” constructions of the binary world, and it offers all who struggle with the genderqueer nomenclature an easy out. “He,” “she,” “ze,” “xe” instantly transmogrify into “they.” Problem solved. Everybody, of whatever gender or nongender in whatever transitional or nonbinary state — all of Facebook’s myriad assignations — becomes a “they.”

Of course, the singular “they” totally bollixes up pronoun-antecedent agreement and makes it virtually impossible to avoid sounding so stupid in print that readers will think you don’t know how to count. Witness: “What is that person of indeterminate gender doing over there?” “They are riding their bicycle.” Throwing the language into the dumpster is small price to pay to salve the feelings of a minuscule constituency.

Some in the trans world, however, take offense at the default option: it doesn’t respect their gender choice, whether it be binary or nonbinary. They don’t want people misgendering them as a “they” when they identify as something else.

None of this assists you in deciding which pronoun to use with our green-haired barista, does it? Is the barista an uncompromised “he”? A straight “she”? Transitioning from one to the other? The barista could prefer nonbinary pronouns, the “xe’s” and “ze’s” and what-not. You could go with the singular “they” and hope “they” take no offense. Which pronoun will you use?