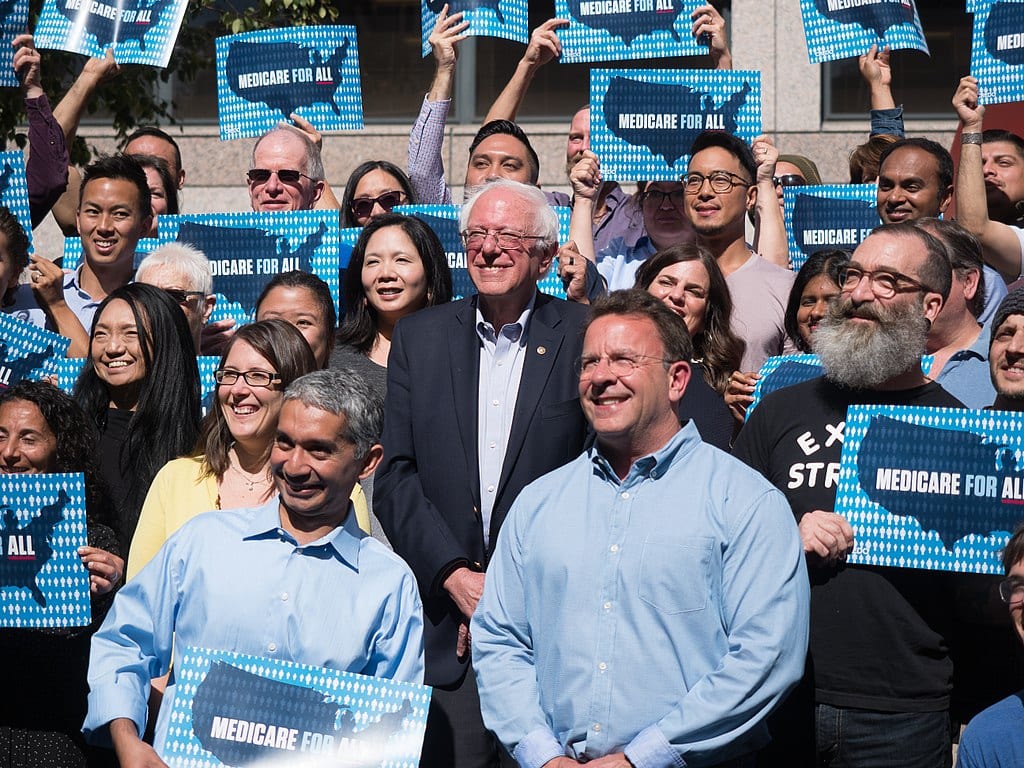 As the left rises, so does its relabeling as “progressive.” Beneath relabeling lies an acute problem for Democrats facing the left’s ascendancy. The left can win Democratic primaries, but Democrats cannot win general elections as “the left.” No triviality of semantics, it’s serious politics: Democrats have little choice but to attempt the left’s re-branding.

Democratic Party leaders definitely took notice. This Tuesday’s primaries showed the establishment working hard and spending heavily to determine contests in their favor. In California alone, they spent over $7 million to ensure they got their candidates to November’s general election.

However, establishment Democrats’ problem has not gone away. Posting bail should not be mistaken for a pardon.

The Democrats’ problem is not a new one, but its urgency is. Senator Bernie Sanders went toe-to-toe while taking establishment-anointed Hillary Clinton wire-to-wire. Despite getting 40 percent-plus popular support, establishment super delegates kept Sanders from a legitimate shot to win: A groundswell that stayed below ground was just swell. In 2018’s primaries, there are no super delegates and increasingly there are real consequences.

Liberals represent America’s distinct ideological minority. In 2016, despite eight years of America’s most liberal president popularizing and raising their issues and profile, exit polling still showed them only 26 percent of the electorate — well behind conservatives (35 percent) and moderates (39 percent). And comprising a quarter of America’s electorate is their high water mark — as recently as 2004, liberals comprised just 21 percent.

Positive spin would acclaim the left’s growth, but there is no escaping it remains just a quarter of the electorate, still needing roughly twice its number to reach an electoral majority. Yet with this liability comes loyalty: Liberals voted 84 percent for Clinton in 2016 — greater attachment to Democrats than either moderates or conservatives showed to either party.

The Democrats’ problem is that American elections generally hinge on the center: Both liberals and conservatives need moderates to form a majority. The left is at least as far from the center as the right, but requires substantially more of the center to make a majority.

Democrats have little choice but to attempt to relabel the left as “progressive,” before the left re-brands the Democratic Party as “the left.” The effort is as neat as it is necessary. By using “progressive,” they implicitly acknowledge the weakness — separation (i.e., extreme) from the center — but seek to make it positive: Although separated, it is because they are ahead of where the center will be.

In a country of constant innovation, this linguistic legerdemain works nicely by seeming to tap into what has led America’s progress. At the same time, it casts the left’s (“progressives’”) opponents as the opposite: Regressive.

Of course, the progressive label’s greatest service is masking reality diametrically opposed to its rhetoric. The left’s ideology is anything but new, just as it is anything but successful. Its essence is the redistribution of resources within society.

Ultimately the more extreme these programs are, the shorter their duration. Done on a single program basis, such as Obamacare, they can labor on for some time — their obvious flaws papered over by resources from the rest of society. When done on a societal-wide basis — as formerly in the USSR and currently in Venezuela, Cuba, and North Korea — lacking a subsidizing private sector, they collapse.

When given lemons you are obliged to make lemonade. To make lemonade, you need a lot of sugar. “Left” is the lemon; “progressive” is the sugar. You cannot fault the Democratic establishment for making the most out of what it is currently getting the most of. If anyone should be faulted, it is Republicans.

Words matter. For Republicans to win the war of ideas, they must first win the war of words. The first battle in that war must be to refute the Democrats’ equation of the left and progress. When reality continually denies the connection, Republicans should be eager to follow suit.