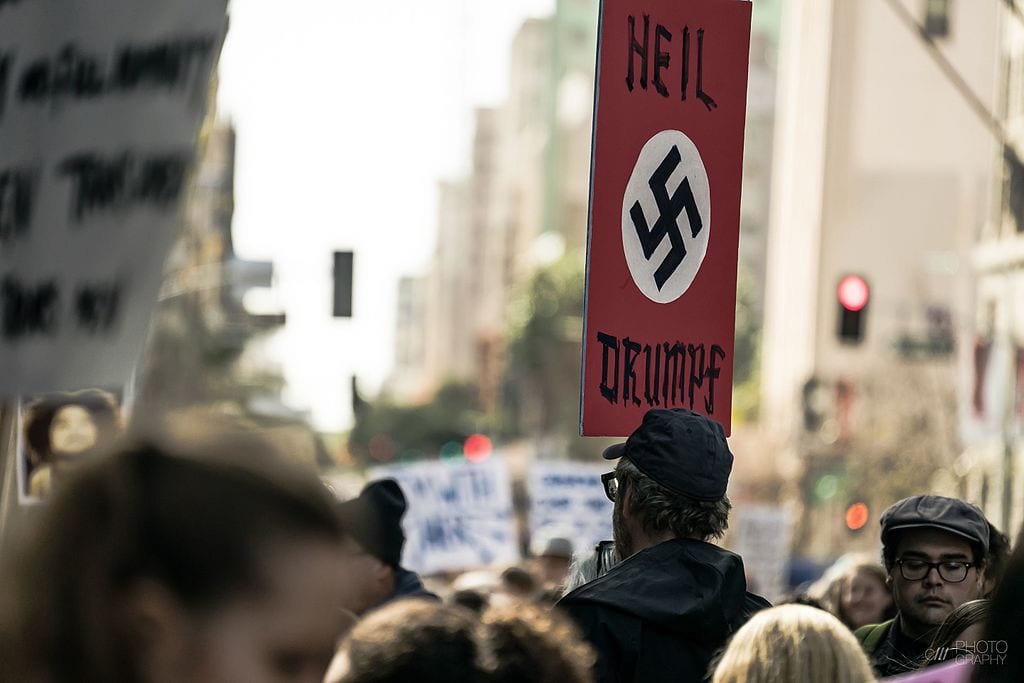 “The true nationalists and patriots were progressives — and environmentalists.” So declared an August 2015 article at the website of Think Progress, founded by the Center for American Progress, citadel of the progressive-liberal left.

Back then, nationalism was good to progressives. Now, with Donald Trump having bothered to weigh in, nationalism is bad to progressives. In fact, it’s downright detestable. It’s Hitlerian. It’s Trumpian-Hitlerian. By golly, it’s yet another Trump “dog whistle,” a not-so-veiled clarion call to fellow xenophobes in his neo-Gestapo movement to start constructing concentration camps for the caravan along the southern border.

The latest example of the left losing it are the histrionics and hysterics denouncing Trump’s newest malevolent ism. The list is ongoing: nationalism, patriotism, populism, sexism, chauvinism, lookism, ageism, white-maleism, vegetarianism. The Donald steadily stirs up a toxic witch’s brew — a dab of fascism, a sprinkle of Nazism, a smattering of racism. Whatever the left can sniff out for its agitprop du jour.

Remember, they called Ronald Reagan a fascist and a racist. Ditto for both Bushes. Ditto for any Republican they don’t like.

Hey, liberals — ever hear the fable about the boy who cried wolf? There really is something to that, you know.

The latest leftist demand is that Donald Trump, in mode of historian/political scientist, provide an acceptable definition of nationalism. Liberals, of course, will be judge and jury as to whether the definition passes muster.

“It means I love the country, it means I’m fighting for the country,” a defensive Trump avers. “I’m proud of this country and I call that ‘nationalism.’ I call it being a nationalist and I don’t see any other connotation than that.”

A funny thing about the left’s consuming hatred of Trump: Liberals seem torn over whether to caricature the man as a Machiavellian genius coyly prompting his base or a slack-jawed Neanderthal who couldn’t grunt or spell the word nationalist.

But the real outrage with this liberal hissy fit over nationalism is that nationalism is something the left has alternately condemned or praised depending on the objectives of the moment.

Look at the aforementioned piece from Think Progress on “what it means to be a progressive.” Invoking Progressive pioneer Teddy Roosevelt’s historic 1910 speech, titled (gasp), “The New Nationalism,” the article affirmed: “Roosevelt defined what it was to be a progressive, and why the true nationalists and patriots were progressives — and environmentalists.”

Hmm. Well, that’s not the left’s current narrative on nationalism.

Liberals, please instruct us: When is nationalism good and when is it bad? This is confusing.

The answer is that everything is contingent on the priorities of the moment. And the pursuit of the objective is made worse by the left’s endemic emotionality and historical ignorance. Progressives don’t know their own history. When informed of that history, their reaction is dictated by knee-jerkism and the winds and whims of the day. They are ideological and political relativists as well as moral relativists.

Making lewd comments and objectifying women is conveniently forgotten if Jimmy Kimmel did it for years on The Man Show. Smearing old J. Edgar Hoover as a “cross-dresser” and “transvestite” has been a wonderfully fun tradition. Segregation? Look the other way if the practitioner is progressive icon Woodrow Wilson. As for Robert Byrd, official Exalted Cyclops in the KKK— well, the cyclops morphed into the conscience of the Senate. He stood right aside the “Lion of the Senate,” Ted Kennedy, champion of women.

The internment of Japanese Americans? That’s permissible given that the executive order was signed by FDR. Racial eugenics, a gospel of “race improvement,” a “Negro Project,” and a May 1926 speech to the Silver Lake, New Jersey women’s chapter of the KKK? It’s just snappy if the guilty party was Planned Parenthood founder Margaret Sanger. When Hillary Clinton (winner of Planned Parenthood’s Sanger Award) remarked of two prominent black politicians (Cory Booker and Eric Holder), “I know, they all look alike,” her liberal audience howled at a rollicking good crack.

We could go on and on. These aren’t dog whistles; they’re trumpets.

For progressives, it all depends on the person, the politics, the purposes. Nationalism? Good or bad? Remember: “true nationalists and patriots were progressives — and environmentalists.”

But if Donald Trump talks of nationalism, well, then nationalism is pure white-hoodedness. “Nationalism of the worst kind,” sniffs a Washington Post writer.

Thanks, liberals. Please continue to lecture us about decency and civility in our national discourse.