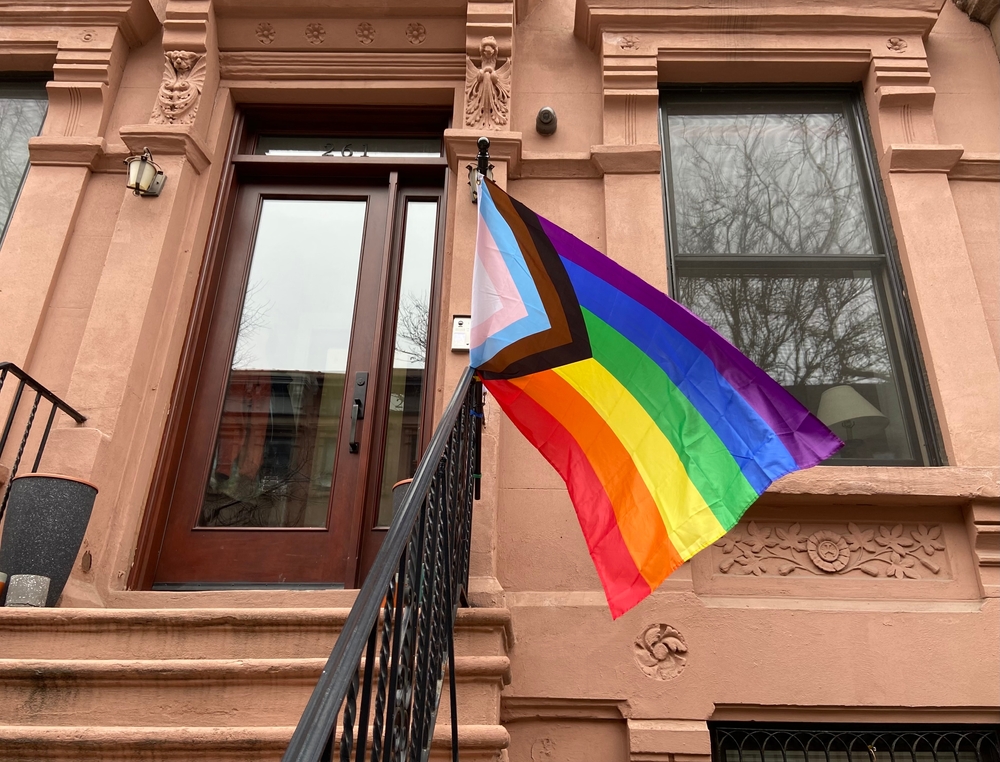 Brockway, Penn. — You would never know it’s Gay Pride Month here in Brockway, Pennsylvania, or any of the small towns in rural Pennsylvania that I drove through last weekend during a two-hour-plus drive from Grove City in Mercer County to Emporium in Cameron County.

Residents of big cities, who glimpse an LGBTQIA+ flag everywhere they turn in June, would be dumbfounded by the glaring contrast to rural America. The difference is as visible as the banners blowing in the wind.

These towns have long been festooned with American flags as June turns to July for Independence Day celebrations, of which little Brockway has one of the best you’ll see anywhere. In recent years, however, a new banner has unfurled in these towns. No, it isn’t rainbow flags. I saw not one as I drove roughly 220 miles in areas far removed from any big city, from any university town, and from liberal enclaves in the Northeast. What are ubiquitous in these little towns are banners of military servicemen and women — of local heroes past and present. These are handsomely designed banners, photos of soldiers adorned with red, white, and blue.

As I encountered each new town — Mercer, Harrisville, Brockway, Dagus Mines, Kersey, St. Mary’s, Emporium — it was the same sight again and again: Every lamppost boasts faces of the town’s soldiers who served as far back as photos exist.

When I first started seeing the faces, it was typically one banner per lamppost, but it’s now beyond that. Every lamppost has at least two faces, one on each side. Some have four. In Brockway, a bunch had six. In the past, they were mainly faces of fallen soldiers. Now they often include current service members. In tiny Kersey, they adorned not only lampposts but telephone poles extending two miles out of town. The banners are up for Memorial Day and through July 4, though in some towns they remain posted year-round. 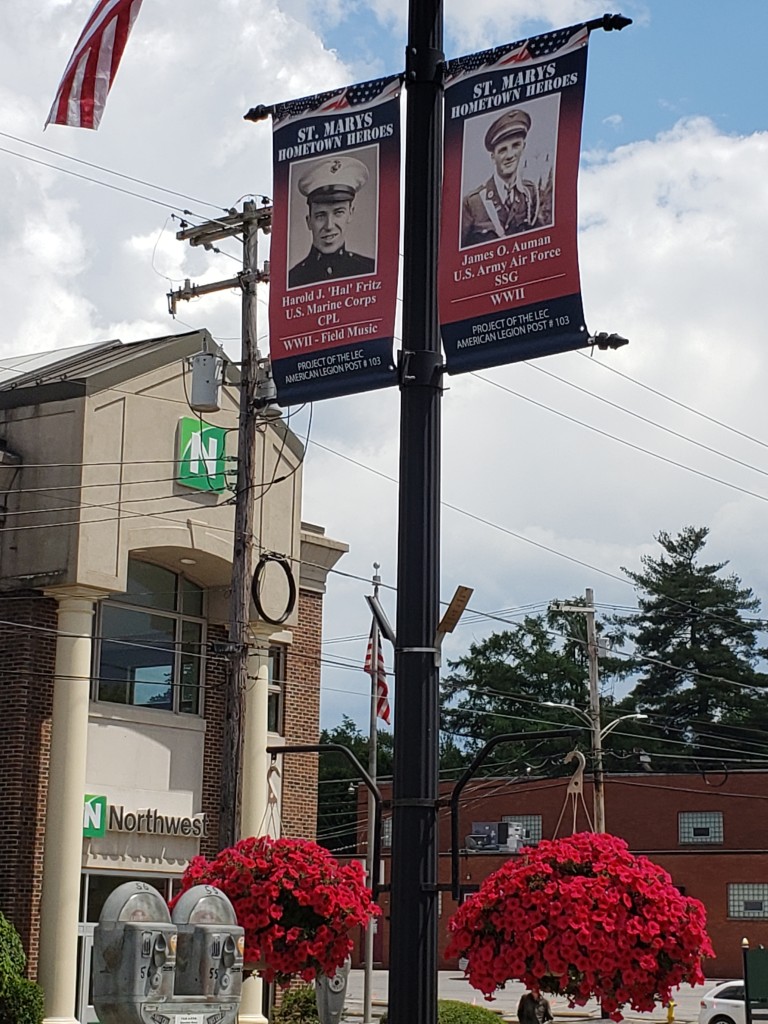 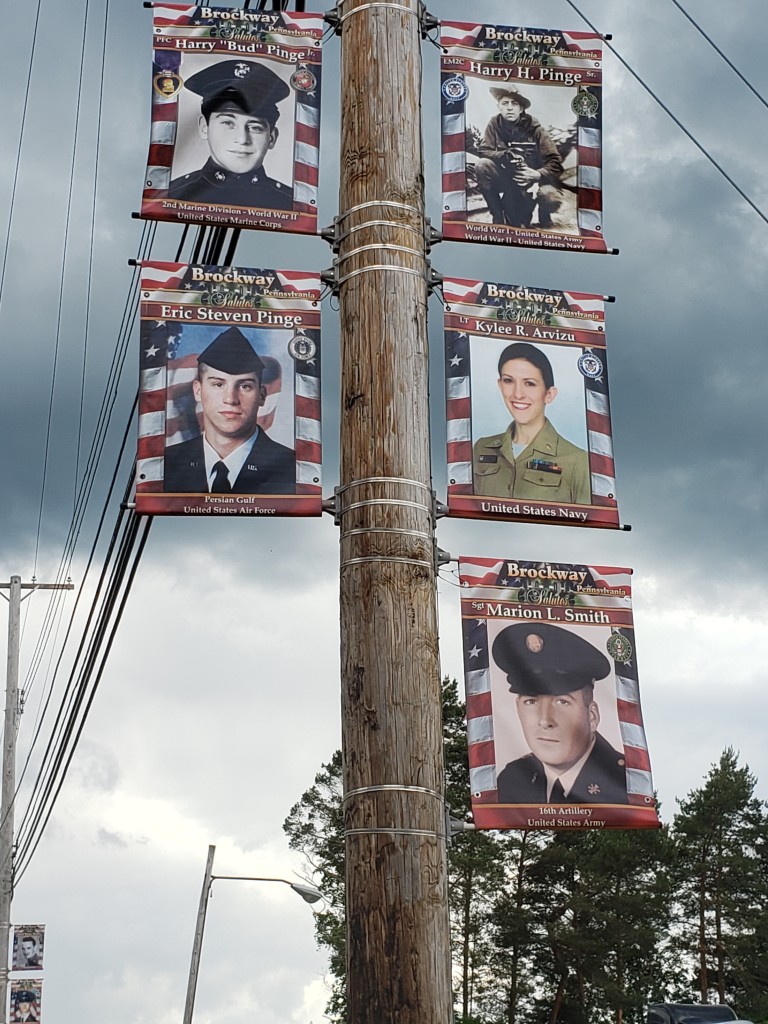 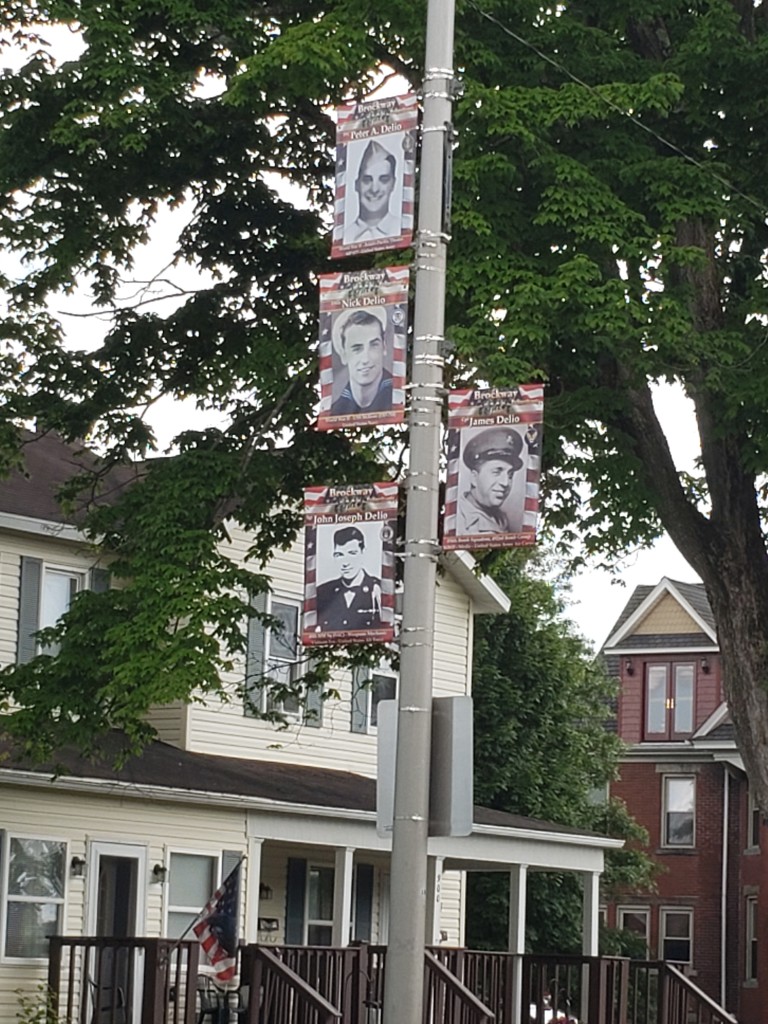 It is awesome to see. These are the people who sacrificed for this country and protected our freedoms. And yet, in so many big cities and liberal enclaves, you will find no such remembrances of them; those places are instead celebrating sexuality and “identity.” Their thing on display is sex and gender, not military service and sacrifice.

President Joe Biden’s last-minute, late-night acknowledgement of D-Day on June 6, while his administration everywhere — including embassies abroad, from Afghanistan to the Vatican — flies the Gay Pride flag all of June, is a perfect illustration of where liberals’ loyalties lie. Military heroes are not on their radar; sex is.

I’m tempted in this article to make a play on words and assert that these military flags in these little towns are their Pride Flag. But I don’t want to go there. These are flags of honor, of remembrance, of memorial.

Pride, by contrast, is the first and worst of the seven deadly sins. Those are the sins from which all others emanate. You do not celebrate pride, period. “Pride cometh before a fall,” say the Scriptures. Pride goes before destruction. It was Satan’s pride that brought sin and death into the world. It expelled humanity from paradise — a paradise lost, as Milton put it. Satan’s prideful rebellion prompted his disobedience to God and to the laws of God’s creation.

“It was pride,” said Augustine, “that changed angels into devils.”

Pride is to be rejected. In The Rule of St. Benedict, monks had to shun pride to strive for humility and attain virtue. Pride needed to be the first thing purged rather than the first thing embraced.

Thus the supreme irony that the LGBTQIA+ movement and its advocates have chosen pride, of all things, as their motto, their creed, the very name of their month. What they have made their primary virtue has always been understood in the Judeo-Christian tradition as the primary vice. A message to LGBTQIA+ folks: If this were my slogan, I would change it.

Then again, that horse is out of the barn. They have no desire to change. The fact that the Judeo-Christian tradition condemns pride is no cause at all for those elevating Pride every June to condemn it. Quite the contrary.

Americans increasingly no longer live in the Judeo-Christian tradition. The theological things I’ve said here about pride would baffle the modern millennial, who isn’t required to read Dante in college nowadays but instead receives incessant indoctrination on sex, gender, and race.

“Hey, hey, ho, ho, Western civ has got to go!” the revolutionaries chanted. Well, it’s gone. Banished from the once-required core of practically every university.

This is post-Christendom America. And it will only get worse. Hang on, pilgrim.

The vast profusion of Gay Pride flags is a cultural tsunami. Every corporation flies it. Major League Baseball players who beg not to wear the colors and simply be permitted to play their game in peace without politics are vilified as bigots and haters. Liberal moms and dads fly rainbow colors from their front porches while toting their 5-year-olds to Drag Queen Story Hour.

But if there is one literal sign that America as we knew it still exists to some degree, it is the sudden profusion of these banners in small towns heralding our soldiers who fought for freedom. It’s something that the Left’s angry cultural revolutionaries can’t take away. After all, they don’t live there.