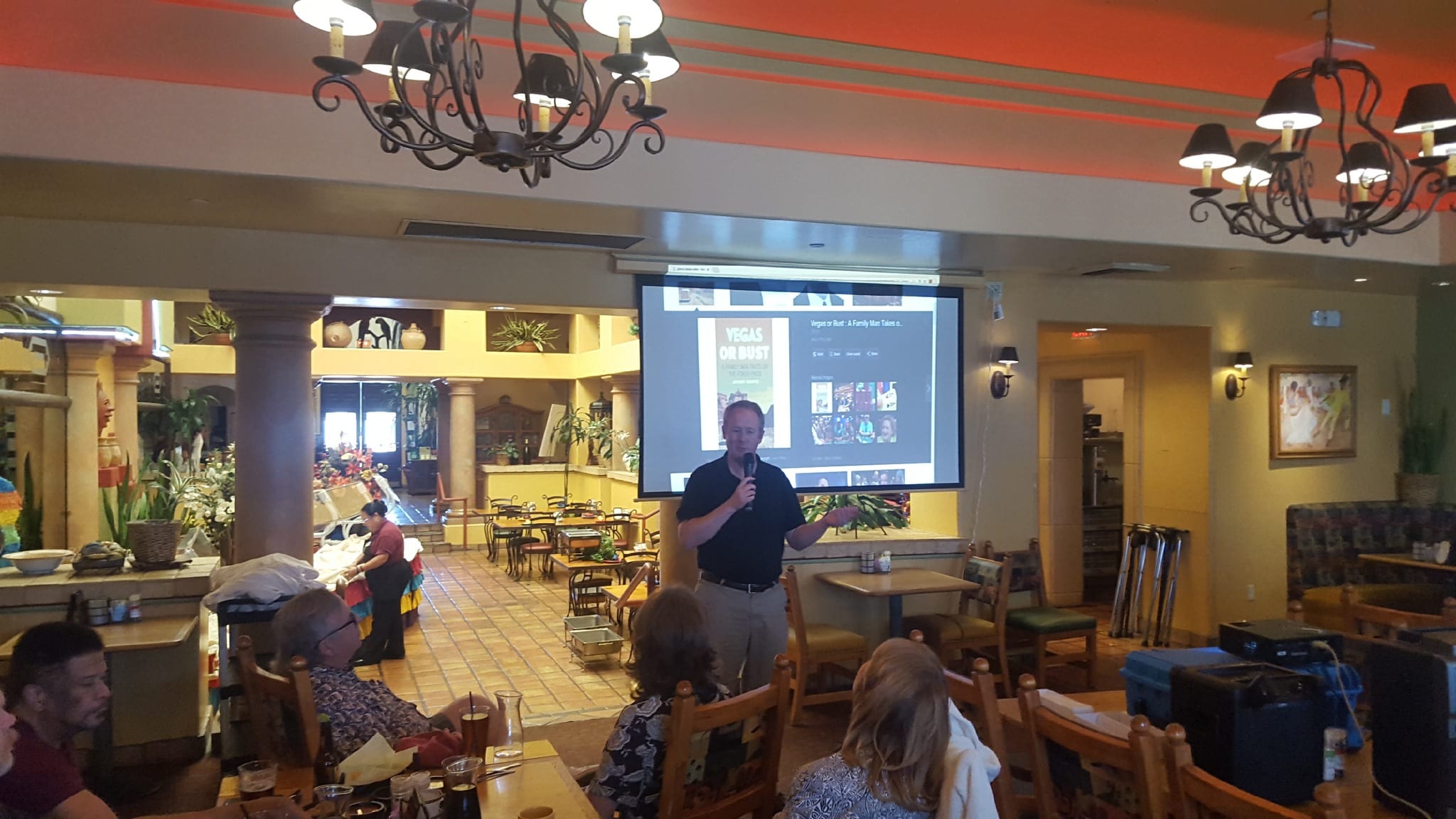 I had the privilege to speak to the Wednesday Poker Discussion Group in Las Vegas recently about my book Vegas or Bust: A Family Man Takes on the Pros, which features two main storylines: an examination of how poker changed between the passage of the Unlawful Internet Gambling Enforcement Act (UIGEA) of 2006 and 2016, as well as my own journey through the World Series of Poker (WSOP) in 2016.

That group dates back more than two decades, in the days before the poker boom, having been started by Linda Johnson and Jan Fisher, two stalwarts in the poker world. Johnson founded Card Player magazine and previously served as announcer for the World Poker Tour. Fisher helped found the Tournament Directors Association, the primary group that determines poker rules used today. The two also co-own Card Player Cruises, which sets sail for exotic destinations while offering poker tournaments and cash games.

The group formerly met at the coffee shop in the basement of Binion’s before it closed; members now meet every Wednesday at Ricardo’s on Flamingo Avenue, about a mile west of Rio All-Suites Hotel & Casino, which now hosts the WSOP. After eating lunch, the members usually listen to a guest speaker and then have an in-depth discussion of a poker hand or two. It’s evident from just one meeting that these people think deeply about the game.

The best part? Meetings are open to anyone, so anytime you’re in Vegas on a Wednesday do consider dropping in.

Bob Fisher, who now runs the group, was kind enough to offer to let me speak about Vegas or Bust, which some members had a keen interest in because I share the trials and tribulations about one summer at the WSOP. While other — much better — writers have explored themes that include success or failure in the WSOP Main Event (James McManus in Positively Fifth Street and Colson Whitehead in The Noble Hustle) or a year on the tournament trail (Anthony Holden’s Big Deal and Bigger Deal), I believe I am the first to examine a run specifically at the WSOP from start to finish.

I took a smallish $10,000 bankroll into the summer — just enough to buy into the Main Event if that money were to survive the previous six weeks of lower buy-in tournaments and cash games — with a plan to ride the wave of success or failure. If I started winning, I’d play more of those $1,500 WSOP bracelet events, but if I was less successful I’d focus on the low-roller events on Fremont Street. Win or lose, I knew I’d have a fun summer. Without revealing too much about the results, I will say I wasn’t disappointed in how things turned out.

Concurrent with that story, I chose to examine the state of poker 10 years after Congress passed UIGEA, which choked off online poker that was feeding the booming growth of the live game. Consider that in 2003, when an online qualifier from PokerStars, Chris Moneymaker, won the Main Event, there were 839 entries. As regular Joes witnessed that Tennessee accountant’s success and thought they could do it too, the numbers jumped more than ten-fold to 8,773 by 2006. But participation dropped sharply after UIGEA came into effect, seeing some gains in recent years. Poker continued its slow climb back from the UIGEA brink this year as 7,874 players entered the Main Event that started on July 2, the second largest field ever.

In 2006, the biggest websites in online poker — Party Poker, Full Tilt Poker, Poker Stars, Bodog and Doyle’s Room — rented out convention space at the Rio as marketing tools. You might wander into the Full Tilt Poker room and view a display case full of the site’s sponsored pros’ WSOP bracelets, grab a drink from the Bodog room and a snack from Doyle. SWAG was everywhere.

That all disappeared post-UIGEA, as did much of the sponsorship money that helped fuel the growth of poker on TV, poker media, and the income of pro players. “Cowboy” Kenna James told me he lost his house, car, marriage, and dog after the aftereffects of UIGEA were felt.

“It was like being a mile away from Niagara Falls and you can feel the current start to pull you,” he said. “Next thing I know, I’m over the falls without a barrel.”

McManus, who gained notoriety from not just Positively Fifth Street but also his extensive history of the game titled Cowboys Full: The Story of Poker, became a red pro on Full Tilt Poker. That was a marketing gimmick created by the site to entice players — they could view where the pros were playing and join them in games, both in low and high stakes.

But after the Department of Justice seized Full Tilt Poker in 2011, accusing it, Poker Stars, and Ultimate Bet of operating illegally in the United States, that money disappeared. While regular players eventually got their money back, those affiliated with the site, like McManus, were never paid. He also lost the income he was receiving from Full Tilt Poker from playing in the games.

That day came to be known as Black Friday by poker players, and the game is still trying to recover from the effect. While the fervor over poker isn’t quite as high as it was during the boom years of 2003-2006, the game remains popular, with the WSOP and other tournaments drawing the masses to Vegas each summer.

I’m also bullish on the future of the game, and will be keen to see how the overturning of the Professional and Amateur Sports Protection Act by the U.S. Supreme Court, which now permits states to legalize sports betting within their borders, will affect poker. Sports betting and poker often go hand-in-hand — look at how many sportsbooks are near poker rooms in casinos — so many of the states that allow sports betting will also likely allow poker.

Before UIGEA, every American could log on to their computers and play poker against people across the globe. It would be nice to see a future where that’s possible again.