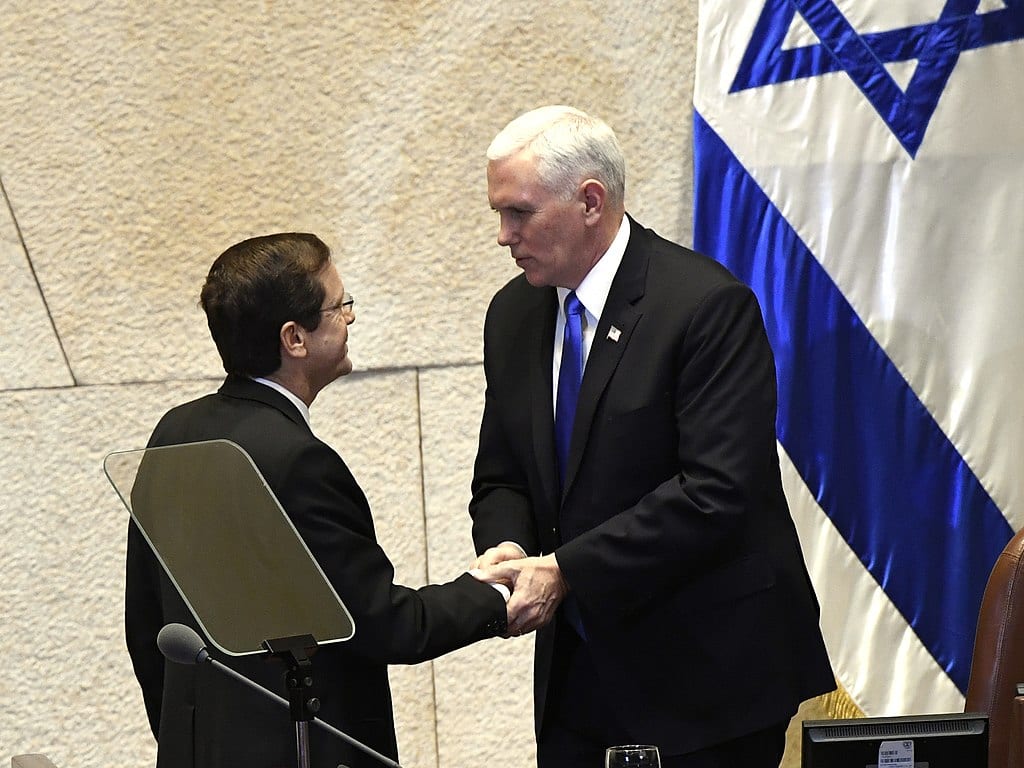 When Vice President Mike Pence wrapped up his address to Israel’s Knesset, a voice in the 120-member legislative body shouted out, “God bless you, Mr. Vice President.” The voice belonged to Yehuda Glick, a member of Prime Minister Benjamin Netanyahu’s conservative Likud Party.

It was not all love. Members of the Knesset, or MKs, who are part of the Joint List (an alliance of Arab-dominated parties) boycotted or protested Pence’s speech to protest President Donald Trump’s announcement last month that the United States would recognize Jerusalem as Israel’s capital and move the U.S. Embassy there from Tel Aviv. When Pence announced the embassy transfer would occur before the end of 2019, Joint List MKs shouted and displayed signs that proclaimed Jerusalem as the capital of Palestine before ushers ejected them.

When Pence said the administration would support a two-state solution “if both sides agree,” some MKs applauded, others did not. Netanyahu did not.

And yet with that disagreement in the air, Pence won praise outside the right. Isaac Herzog, leader of the opposition Labor Party, lauded Pence’s “moral clarity” and “brave deeds” in Israel’s defense, such as Pence’s opposition to the political movement to boycott Israel. This, even though Pence declined to meet with Herzog during the visit, the Israeli newspaper Haaretz reported. (The meeting did not fit in Pence’s schedule, a source in the vice president’s office explained.)

Pence spoke of the common bonds shared by America’s pilgrims and Jews who came to Israel in “the story of an exodus, a journey from persecution to freedom, a story that shows the power of faith and the promise of hope.” He also referred to the Jewish people’s bond with Jerusalem going back for 3,000 years.

Chris Mitchell, Middle East Bureau Chief for CBNNews, noted that many Israeli Jews “are very excited that Mike Pence, as an evangelical Christian, would come and reaffirm the biblical roots of the Jewish state as he did in the Knesset.”

While Trump also refers to his Christian faith, Pence has an authenticity when he talks about the Bible that the president cannot match. (During the 2016 campaign, Trump famously botched his Bible talk when he referred to a verse in “Two Corinthians” instead of “Second Corinthians” — a mistake Pence would not make.)

Middle Eastern Christian leaders would not meet with Pence, as they, too, object to Trump’s Dec. 6 Jerusalem announcement. Pence did not let that get in his way.

Pence is a good pick for foreign trips, noted Reno’s Ty Cobb, a foreign policy adviser to President Ronald Reagan now with the National Security Forum. That’s because “the president himself draws such enormous reactions, both positive and mostly negative,” he said.

But Pence’s Knesset speech was a hit. The Jerusalem Post editorialized, “What moved more than a few listeners to ears was Pence’s utter lack of cynicism.”

Israel Hayom’s Boaz Bismuth called it “the speech Israel has been waiting to hear for 70 years.”

The Wilson Center’s Aaron David Miller wrote in Politico that Pence “spent less than 48 hours in Israel saying literally everything Israelis want to hear.” And, he added, “Israeli newspapers ran the remarks in full.”