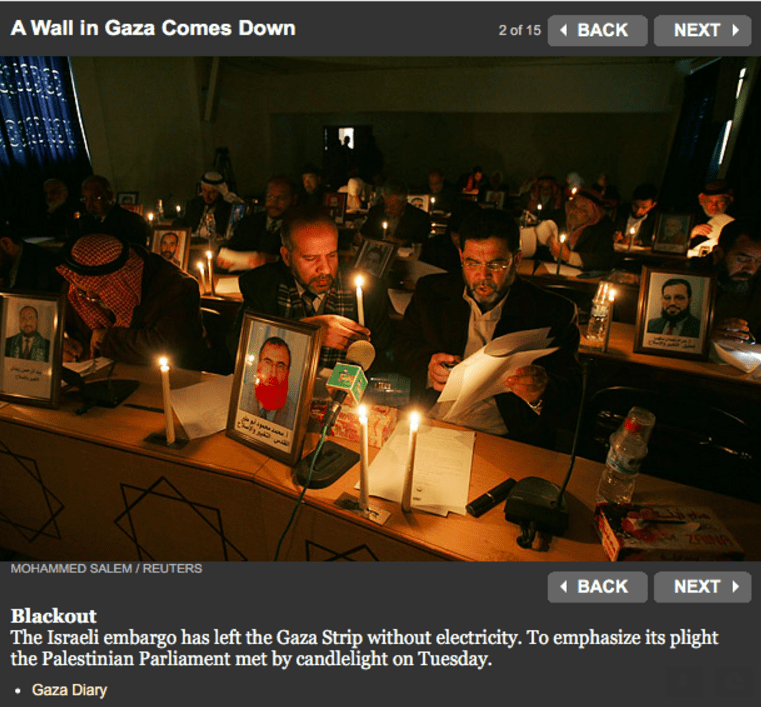 Close observers of the Israeli-Arab conflict are accustomed to biased reporting in the elite media that downplays Arab incitements to violence and attacks on Israel while exaggerating the suffering of the “Palestinians.” However, even to the more jaded students of the Middle East, some examples of “fake news” masquerading as objectivity still have the ability to shock.

This morning, while reading a Mencius Moldbug article, I came across a link to this photo that was part of a 2008 Time magazine “Photo Essay” consisting of Reuters images captured at a time of unrest in Israel precipitated by the usual homicidal Arab anti-semitism in the Gaza Strip.

Look closely at the photo and you’ll see that it’s a complete fraud–a staged photo-op purportedly showing an ostensible “Palestinian Parliament” meeting by candlelight after the electricity has been cut by the Israelis. Of course, with production values being what they are in that part of the world, the geniuses neglected to obscure the obvious sunlight coming through two windows and the door in the background.

The fact that this fraudulent photo is still on the website, after more than eight years, illustrates the contempt that Time magazine has for its readers.