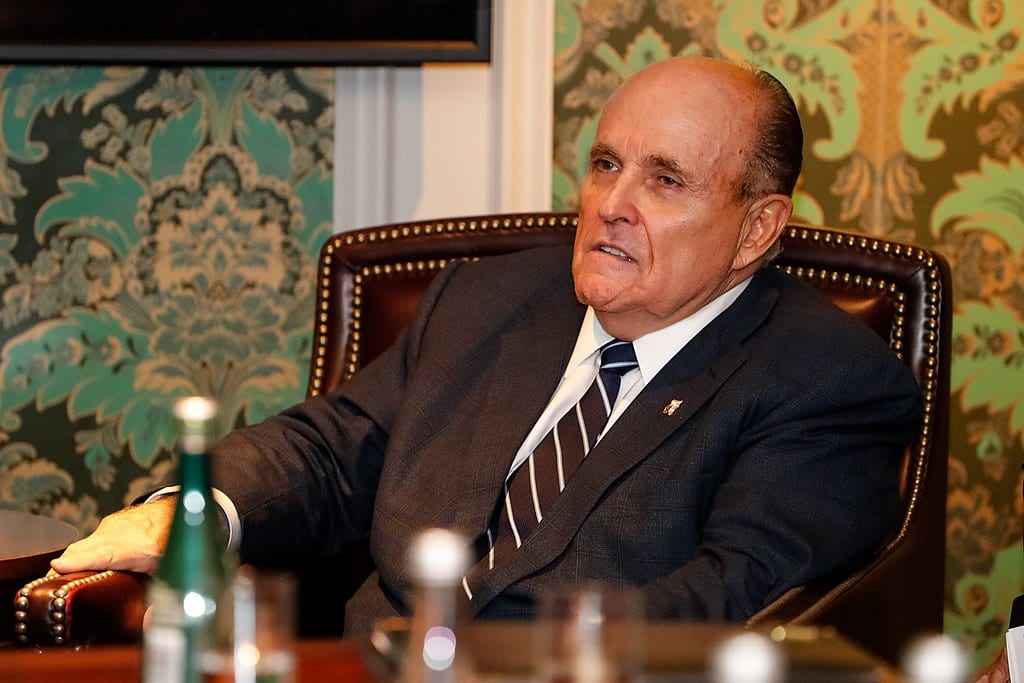 In New York City, where Bill de Blasio has nothing else to worry about, the controversy is now into its second day over comments that Rudy Giuliani made the other day in an interview with New York magazine, in which Giuliani said that George Soros is hardly a Jew and that Rudy is more a Jew than Soros. The Obama Jews who took over control of the Obama-lite Anti-Defamation League at the end of the Obama Wasted Decade criticized Giuliani’s remarks. Now headed by Jonathan Greenblatt, the former Obama official who turned the ADL into an Obama-lite operation, the ADL increasingly is but one more shill of the Democrat party. Large segments of the American Jewish community no longer regard it as an honest broker and turn elsewhere when anti-Semitism arises.

Mayor de Blasio next joined in the chorus, also calling Giuliani anti-Semitic for Giuliani properly criticizing the way that George Soros throws around his money to promote evil Leftist programs. The irony of de Blasio joining that chorus is that, under his tenure as mayor, New York City has seen a shocking increase in anti-Semitic violence in the streets, with videos of attacks on Brooklyn men in Hasidic garb going internationally viral. De Blasio, like most American leftists, refuses to see attacks on Jews as “anti-Semitic” unless they are perpetrated by haters on the right. Pictures don’t lie, and the Jew-hating attackers caught on video repeatedly fail to meet the basic definition of “White nationalists.” So de Blasio repeatedly characterizes them as street violence, rather than as anti-Semitic attacks. In this, one is reminded of Obama calling acts of Islamic terrorism “workplace violence.” But now de Blasio finally has found someone to label as “anti-Semitic,” a predecessor New York Mayor Giuliani, whose administration could not have been warmer to the Jewish community.

The reality for Jews is that George Soros indeed is an apostate. When the Left races in to defend Soros, they come up with the pablum that he survived the Holocaust. But what does that inherently prove? Adolf Eichmann also initially survived the Holocaust. Soros survived by living as a non-Jew under the guardianship of a Nazi whom he assisted in his teens, keeping records for that Nazi of property the Nazis confiscated from Jews. That is Soros’s own acknowledgement, in a CBS 60 Minutes interview with Steve Kroft. It is not as though he survived the Holocaust by organizing an uprising at the Treblinka concentration camp or by organizing the resistance in the Warsaw Ghetto. So, at best, his defenders should leave the Holocaust out of his defense because it does not wash. And today he is pure evil, an apostate akin to a Trotsky.

Same with the Communist Bernie Sanders, enemy of Israel. An apostate. An enemy from within.

The Left wildly and irresponsibly wields defamation when they have nothing else — and they typically have nothing else. So they will use the term “racist” to attack very fine people who are not at all discriminatory but actually are good and decent. If you opposed Obamacare, you might have been called a “racist” because a Black president had proffered it. Indeed, CNN panels for eight years called almost any criticism of the Obama agenda as “racist.” In a world where Al Sharpton, a truly racist hater of White people, is given his own show on MSNBC and is hailed as a civil rights leader, it cannot be surprising that decent White people would be called “racist” for sincerely opposing programs or ideas that simply seem wrong and deleterious. In similar fashion, the Left will tag Christians and Orthodox Jews as “homophobes” simply because those people believe the Word of Leviticus 18, and despite those targets of defamation bearing no ill will whatsoever against gay individuals.

The labels of discrimination are thrown around indiscriminately: homophobe, xenophobe, racist. For months — and even to this very day — President Trump has been tagged by Leftists with the label of “anti-Semite” even though there never before has been a President as favorably disposed to Israel and to standing up to Jew-hatred in this country. Thus, these words have lost all meaning, which is a shame. It should be a terrible thing for someone to carry the title “racist” or “anti-Semite” or “hater.” But the words now are a child’s game, akin to saying that “Your Mom wears army boots.” (And if she is serving in the armed forces, what’s wrong with that?) Most famously, Hillary Clinton went on her diatribe, packaging all conservatives into a “basketful of deplorables.” Her hateful comment was epically stupid and dishonest, helping her lose the 2016 Presidential election.

Those on the Left aim to protect enemies of Israel like George Soros and Bernie Sanders by setting up a defensive wall for the anti-Jewish evil they espouse, calling criticisms of them “anti-Semitic.” But it is not anti-Semitic for non-Jews as well as for Jews to call them out for the damage they seek to perpetrate on our society. Each is deeply evil. Each is surrounded by evil. Each perpetrates evil. Soros, for example, uses vast amounts of his money in part to try electing in targeted American cities local district attorneys who turn law enforcement on its head, freeing imprisoned thugs and refusing to prosecute criminals. Similarly, he has thrown around his money to prop up J Street, perhaps the worst enemy Israel has in Washington, D.C., an organization that offers a venue and microphone to politicians who want to attack Israel and threaten to cut off American support for Israel. Soros has given J Street close to a million dollars. He is despised in Israel — and they know a thing or two there about anti-Semitism.

So the Left, reflected by the likes of Bill de Blasio and the Obama-lite ADL, want to call criticism of Soros “anti-Semitic”? Yet Orthodox rabbis all over the world despise him. Supporters of Israel, of all faiths, despise him. Indeed, it would seem that the real anti-Semitism lies in those who look at all the evil that Soros perpetrates and then defend him by seeing his actions as somehow reflecting those of a Jew. Why do his defenders see him as a Jew under attack?Why a Jew when he barely sees himself that way? He is such an apostate that he cannot even be described as a “Jew in name only” because his family changed their Jewish name “Schwartz” to “Soros” as part of seeking to present as non-Jewish. Thus, Soros is not even a “Jew in name only.”

In the same way, Bernie Sanders is an enemy of Israel. One just looks at the supporters he attracts. He is endorsed for President by Ilhan Omar. He likewise is endorsed by Rashida Tlaib. He not only is endorsed by Linda Sarsour but also counts her as a campaign surrogate. Imagine: With twenty different Democrat Presidential candidates from which to choose, one Jew-hater after another opts to endorse Bernie Sanders as her choice. And that love is mutual. After each virulently anti-Semitic tirade, outburst, Facebook post, or tweet that gets an Ilhan Omar, Rashida Tlaib, or Linda Sarsour into trouble with decent people, Bernie Sanders races in to defend Ilhan Omar, Rashida Tlaib, and Sarsour. Yet he is quick to defame those prominent in defending Israel, calling Israel’s Prime Minister “racist” and calling for America to redirect huge amounts of its Israel support towards the Hamas-led government of Gaza that unabashedly aims to destroy Israel. Of course Jew-haters and Israel haters flock to support Bernie Sanders. And of course even Jews call him anti-Semitic.

The Anti-Defamation League now is an Obama-lite organization, run by people from within the Obama Administration who flocked to ADL after the end of that chapter. It is not a reliable arbiter of who is anti-Semitic. One simply looks at Rudy Giuliani’s life-long relationship with Israel and even at how he emerged to defend the local Jewish community of New York, where he was mayor after the Al Sharpton pogroms under the prior David Dinkins Administration, and sees in Giuliani a life-long dear friend of the Jewish community. By contrast, one looks at George Soros and sees an enemy of Jewish survival. The dichotomy is so obvious that it calls into question the ulterior motives of any person or organization that would describe criticisms of Soros and the money that he wields despicably and for evil purposes as “anti-Semitic.” Soros is evil. And anyone who defends him by invoking his Jewish lineage himself should be ordered to show cause why he or she is not anti-Semitic.

Rudy Giuliani is absolutely correct. George Soros is hardly a Jew. And, figuratively speaking, Giuliani not only is more Jewish than Soros but is more Jewish than half the Jews he knows. As for de Blasio, it would be appreciated if, now that he has terminated his ridiculous campaign for the American presidency, he would do something about the rash of anti-Jewish violence that has erupted on his city’s streets since he took office.