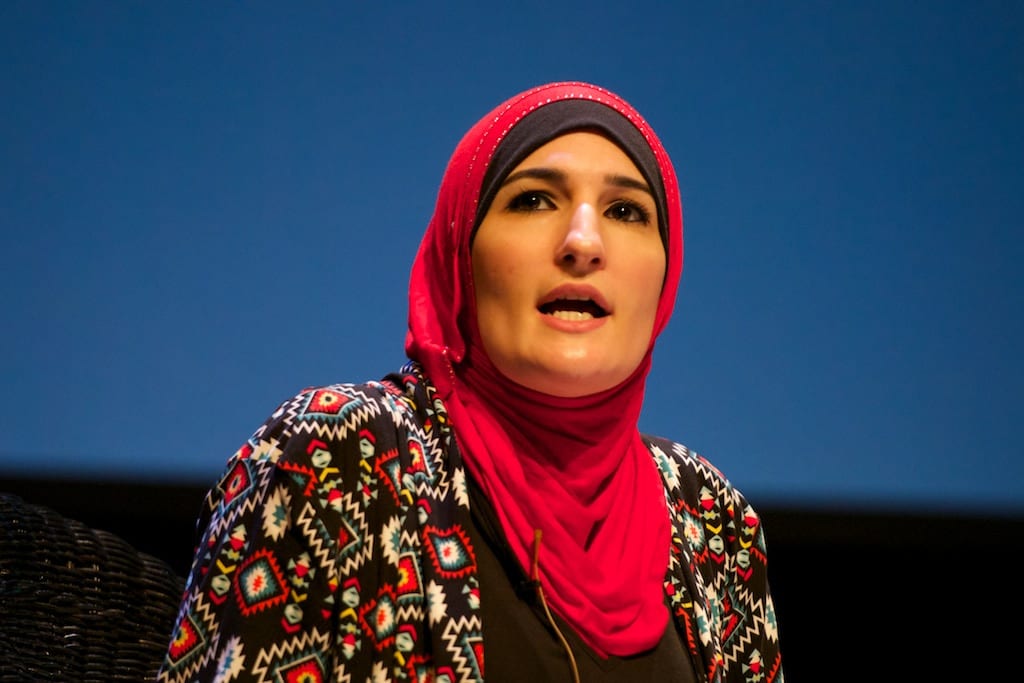 She not only may be the most vicious public Jew-hater in America — certainly a most worthy contender for the highly coveted Farrakhan Top Ten Termites — but she is one heck of a vicious womanhater. How appropriate that she co-head the “[Some] Women’s March [of the Haters, by the Haters, and for the Haters].”

I have known people who, when angry, have made blowhard comments like “If he had said one more word, I was gonna punch him in the nose.” But to say that you disagree with a woman so much that you wish you could remove her vagina? Who in civilized society talks that way? What kind of pervert even thinks that way? Not even sex perverts think that way. (Or, I dunno, do they?) How does that filth and sickness even permeate? And yet Linda Sarsour tweeted in 2011:

“Brigitte Gabriel = Ayaan Hirsi Ali. She’s asking 4 an a$$ whippin’. I wish I could take their vaginas away- they don’t deserve to be women.”

But this vile hater, Sarsour, does not hate everyone. She loves Saudi Arabia. She loves sharia law. Sure, the women may not drive, but the credit cards are interest-free. The Khashoggis will be glad to know. It’s just that America’s most vile hater has a problem with people like the two brave women, one Arab and the other a former Muslim — Brigitte Gabriel and Ayaan Hirsi Ali — because those two have made public lives and careers battling against hateful Islamism and have fought for democracy, freedom, and American values. Ms. Gabriel, a Lebanese Christian, experienced first-hand the difference between the Islam that destroyed her family’s Christian way of life in Lebanon and the neighboring Israel that saved her mother’s life:

I was amazed that the Israelis were providing medical treatment to Palestinian and Muslim gunmen…These Palestinians and Muslims were sworn, mortal enemies, dedicated to the destruction of Israel and the slaughter of Jews. Yet, Israeli doctors and nurses worked feverishly to save their lives. Each patient was treated solely according to the nature of his or her injury. The doctor treated my mother before he treated an Israeli soldier lying next to her because her injury was more severe than his. The Israelis did not see religion, political affiliation, or nationality. They saw only people in need, and they helped.

Likewise, Ms. Ali, a fellow of the Hoover Institution at Stanford, a visiting scholar at the American Enterprise Institute, and a member of the Council on Foreign Relations, has spoken and written passionately against Arab Islamic forced marriage, honor killings, and female genital mutilation.

So Linda Sarsour, co-leader of the “[Some] Women’s March [of the Haters, by the Haters, and for the Haters],” wishes she could take their vaginas away. Again, I ask: Even among highly politicized people with intense political beliefs, what person even thinksin such terms — except for sex perverts and Linda Sarsour? Take their vaginas away? Wow, that must be some Women’s March! No wonder they march so slowly. Can’t hardly wait till Ashley Judd updates her poem about nasty women!

To understand Sarsour, she wrongly portrayed the murder of Shaima Alawadi as resulting from hatred of Muslims when in fact Alawadi’s Muslim husband honor-killed his wife in that religious tradition. Even crazier, she got herself major media attention when a mentally deranged homeless man, known by locals to scream and yell epithets at everyone passing him by, yelled at her; she tweeted that she had been victimized by an Islamophobic hate crime. And remember the underwear bomber? She depicted him as a CIA agent. Feminist Aki Muthali has called her an anti-Black racist. The anti-Zionist Ikhras website also accused her of harboring “an ugly racism towards African-Americans.” Even Courtney Love has tweeted that Sarsour is “a vile disgrace to women and all mankind” as well as an “anti-Semite, anti-American fraud.”

And what a Jew-hater Sarsour is! As “Women’s March” co-boss, she rejects anyone who supports Israel: “Is there room for people who support the state of Israel and do not criticize it in the movement? There can’t be in feminism.” She writes that “Nothing is creepier than Zionism.” She champions the cause of Rasmea Odeh, a convicted murderer of two Hebrew University students. Her hatred extends even to Jewish leftists who refuse to abide outright anti-Israel activity like selective boycotts against Israel. In Sarsour’s words, “criticism of such boycotts [“BDS”] is not only coming from the right-wing but folks who masquerade as progressives but always choose their allegiance to Israel over their commitment to democracy and free speech.” The selective use of the oldest of Jew-hating tropes even won her one-time plaudits from Nazi David Duke. She even frets that some depict Israelis as “human” beings.

Sound like a Jew-hater? Well, how does Sarsour view Farrakhan? Y’know, the guy who calls Jews “termites” and Hitler a “great man.” Yeah, thatFarrakhan. Sarsour’s opinion: “When we write the history of Islam in America, the Nation of #Islam is an integral part of that history.” And she repeatedly has defended Tamika Mallory, co-head of the “[Some] Women’s March [of the Haters, by the Haters, and for the Haters],” for Mallory’s own repeated infatuations with Farrakhan, whom Mallory terms the “Greatest Of All Time.” By contrast, Sarsour has tweeted that CNN’s Jake Tapper, a Jew, is a “member of the alt-right.”

No wonder that so many on the Left have started backing away from the so-called “Women’s March” altogether. Actresses Debra Messing and Alyssa Milano have said they will not participate in the Women’s March because of Sarsour’s bigotry and other Women’s March leaders’ ties to Farrakhan. The Friedrich Ebert Foundation, an NGO affiliated with the German Social Democratic party, withdrew its Human Rights Award originally meant to be conferred on “the Women’s March,” saying that “the Women’s March USA does not constitute an inclusive alliance.” The NGO added that Sarsour “spreads anti-Semitic conspiracy theories that resemble the classic anti-Semitic trope of blood libel.”

How striking that so many, even women on the left, have withdrawn from this narcissistic Jew-hater, woman-hater, man-hater, Caucasian-hater, Black hater who, like the Evil Queen in “Snow White,” is struck by her own sense in the mirror that none is as striking as she. She proclaims her “striking good looks,” declares “I am beautiful.” She attacks Sen. Susan Collins as a “White woman.” For Linda Sarsour it is all racial. She rejects the support of White people in the “Women’s March,” tweeting that Women of Color do not want or need their support: “How many times do we need to tell White women that we do not need to be saved by them?” Like Rachel Dolezal, the erstwhile Spokane NAACP leader who turned out to be disguising her racial Caucasian reality, no one has told Sarsour that, uh, she is White. They do not have to; it is obvious. Likewise, none need tell her that she is America’s most vile bigot. It is obvious.