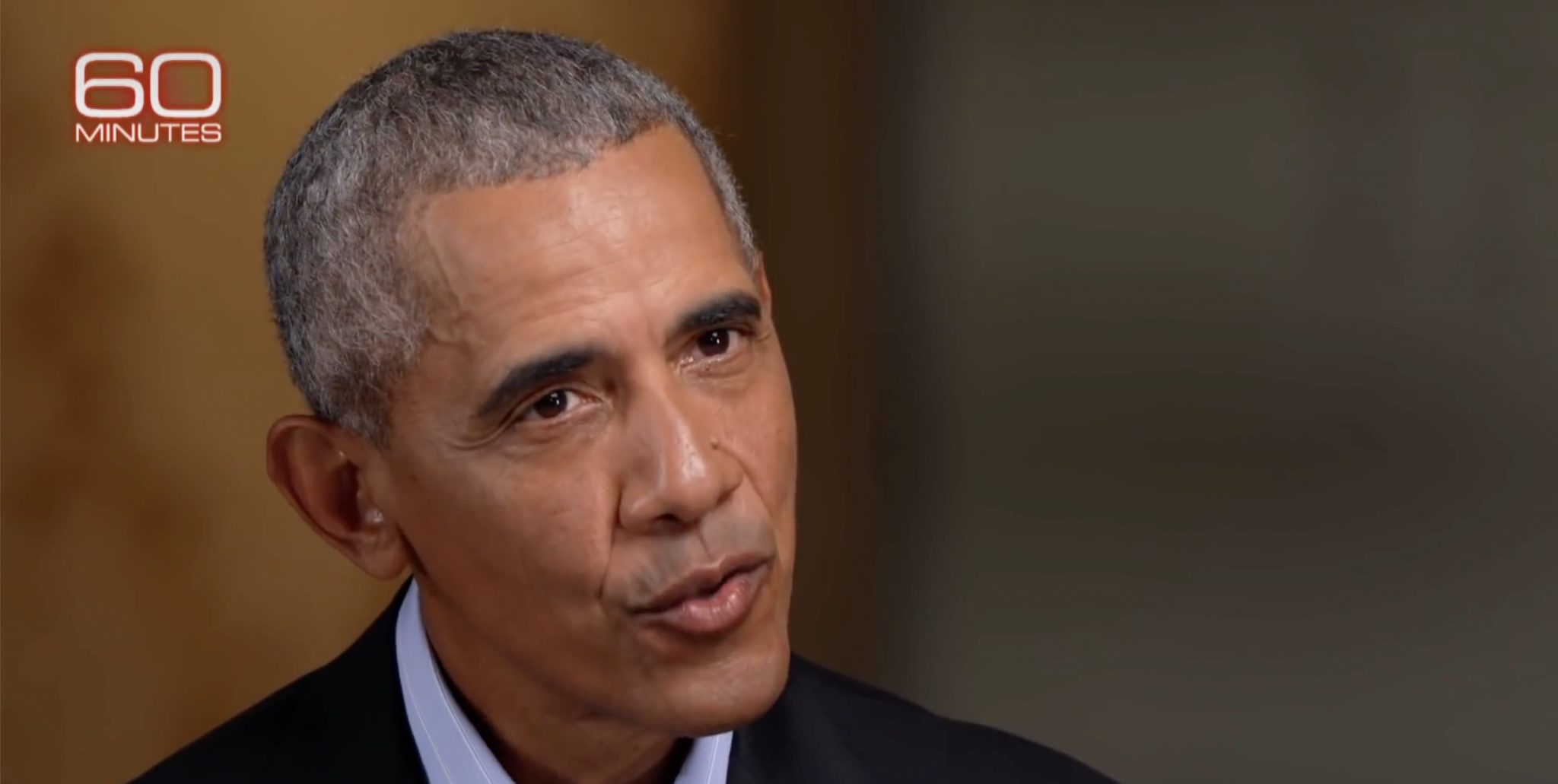 On Sunday, 60 Minutes’ resident sycophant, Scott Pelley, walked former president Barack Obama through a racial landscape unrecognizable to those who know the lay of the land, especially readers of The American Spectator.

Pelley kicked off the misdirection with the question, “Did you watch the video of George Floyd’s strangulation?” Yes, strangulation. Knowing Obama’s weakness for racial scare-mongering, I was not at all surprised by his refusal to correct Pelley. He probably did not know enough to do so in any case.

“Of course,” said Obama. “It was heartbreaking.” He then blathered on about an African-American “reality” that exists only in America’s newsrooms. As to the aftermath of the Floyd death, Obama claimed to have been “heartened and inspired” by the “marches.” He offered not a single word about the stores looted, the buildings burned, the people killed. Nor did Pelley venture a single question.

When the four police officers who allegedly strangled Floyd are acquitted, Obama may not be so heartened. As former state and deferral prosecutor George Parry has argued convincingly in these pages, the officers should never have been arrested. A quick summary:

throughout Floyd’s confrontation with the police, he was at imminent risk of death from sudden cardiac arrhythmia caused by excited delirium. So it was that these officers followed the MPD’s official procedures for how to properly and safely subdue someone in that life-threatening condition. In doing so, they were not only keeping Floyd in the prescribed “recovery position” to alleviate his risk of asphyxiation, they were also keeping an agitated and delirious Floyd from harming himself as they awaited the arrival of the ambulance that they had twice summoned to provide medical aid to him.

For those needing visual evidence, Parry has co-produced a 24-minute documentary that shows the efforts the Minneapolis officers exerted to prevent the muscular, drug-addled Floyd from harming himself. Those who have not watched the video, Pelley and Obama most notably, risk inciting even more death and violence by sharing their ignorance with others.

The pair ventured deeper into the land of the clueless with their discussion of the late Trayvon Martin. After citing Martin’s death among others, Pelley asked pleadingly, “Why is this injustice never overcome?” Obama rambled on through a wilderness of clichés, failing to reveal that the real injustice was done to the man who shot Martin, George Zimmerman.

For a quick summary of that case, let me recommend my own article in these pages, “Zimmerman Suit Spells Trouble for Black Lives Matter.” In brief, the despondent, drug-fueled Martin viciously attacked Zimmerman for doing what any responsible citizen should have done.

In a dazzling display of journalistic alchemy, the media transformed Martin — a skilled MMA fighter a half-foot taller than Zimmerman — into a little boy crying for help, and Zimmerman — a Hispanic, Obama-supporting, civil rights activist — into a white supremacist thug. Those who followed the case in real time know I am not exaggerating. Obama lent his imprimatur to this fiction when he memorably aligned his fate with the perpetrator solely on racial grounds. “If I had a son,” said Obama for the ages, “he’d look like Trayvon.”

Seeming to concede that the media aggravated the racial and political divide in the country, Obama offered a solution that shows either complete ignorance or diabolical intent. Said Obama, “I think we’re gonna have to work with the media and with the tech companies to find ways to inform the public better about the issues and to — bolster the standards that ensure we can separate truth from fiction.”

The day before I watched this interview I got a good sense of how Obama and his allies hoped to “bolster the standards.” My friend “Sundance” at the Conservative Treehouse received an email from WordPress, the tech company that has hosted his site for the last 10 years.

“We always knew there was a risk of being targeted if the left was successful,” he texted me. “Yesterday I was notified they are shutting down my website on Dec 2nd due to ‘content.’ ”

That “content” had proved very helpful to me. In 2012, Sundance and his fellow “Treepers” had fully deconstructed the George Zimmerman case. Through systematic crowd-sourcing, they broke down the details of the shooting as well as the tragic demise of Martin’s broken family life while the “mainstream” media were still showing photos of a pre-pubescent Martin in his football uniform.

Impressed by their work, I made the Treepers the heroes of my 2013 book, If I Had a Son: Race, Guns, and the Railroading of George Zimmerman. So solid was their research that the state prosecutors were caught on camera looking at the Treehouse website. The defense openly followed the site. No one who tracked the Treehouse’s work was surprised by Zimmerman’s acquittal.

The willfully ignorant claimed to be horrified. Said Jesse Jackson of the verdict, “I do not accept it,” and he proceeded to compare Martin’s fate to Emmett Till’s. Al Sharpton called the Zimmerman verdict an “atrocity” and laid the blame on the jurors. The New York Post summed up newsroom sentiments in a one-word headline: “Trayvesty.” A trio of sexually confused Marxists used the excuse of the acquittal to launch the spectacularly lethal organization known as Black Lives Matter.

BLM took its self-destructive show on the road to Ferguson, Missouri, a year later. While activists and journalists were busily parroting the fraudulent “hands up, don’t shoot” mantra, the Treepers were quickly deconstructing the case against Officer Darren Wilson. The Treehouse proved right once again, the major media wrong.

Now, empowered by Biden’s seeming win, Big Tech has decided to deplatform the Treehouse, not their dissembling co-conspirators in Big Media. Obama’s allies appear to have heeded his prompt “to separate truth from fiction,” alas, at the expense of truth.

Obama promptly followed his comments on the need for such separation with the equally chilling, “I think that we have to work at a local level.” As it happens, I had just received an email a few days earlier from Joel Gilbert, the Los Angeles filmmaker responsible for the book and film The Trayvon Hoax: Unmasking the Witness Fraud That Divided America.

In a brilliant bit of investigative journalism, Gilbert proved beyond any dispute what Sundance had suspected: the State of Florida’s “star witness” in the case against George Zimmerman was a complete impostor. Even more newsworthy was the involvement of the now famous Martin family attorney, Benjamin Crump. The evidence is overwhelming that he helped orchestrate what has to be the most stunning bit of judicial fraud in modern memory.

To preview the film, Gilbert rented a large room at the National Press Club. No one in the major media came. Gilbert then tried “to work at the local level.” He scheduled a December 2019 screening and press conference with George Zimmerman at the Coral Gables Art Cinema, a city owned venue. Although Gilbert signed the contract and paid for the rental in advance, the City of Coral Gables canceled the screening with less than 24 hours’ notice. The problem again was “content.”

Said Gilbert at the time, “I was shocked. It’s really sad that they can do this kind of censorship. We showed it at the National Press Club in Washington, D.C., and there was no problem.” Gilbert sued the theater and the city. They have now settled out of court, but Gilbert would have happily traded the settlement for a shot at getting the story out.

He never got the opportunity. In the wake of the cancellation, I volunteered to call the Florida media to interest them in Gilbert’s work. To a person, they refused to follow up. “There is a Pulitzer here,” I told them. Nope, they were not interested, not even as Crump climbed over the bodies in his race to the top of his perverse professional niche.

For years now, Obama and his media allies have had a chokehold on the news both locally and nationally. If there a strangulation victim here, that victim is the truth.