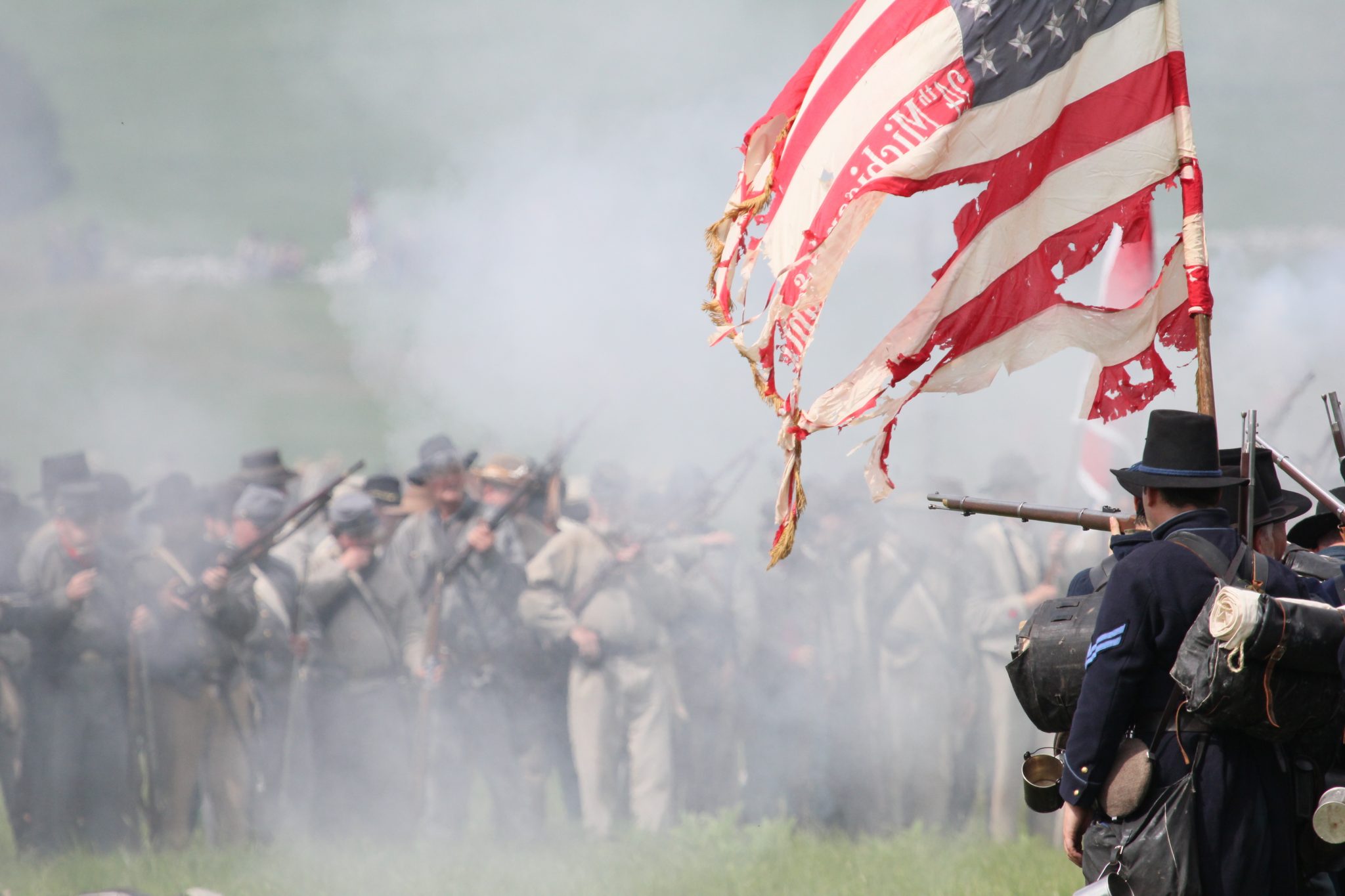 How long must the South be chastised for its history? For the editors of the New York Times, apparently, the answer is, “Forever.” Nothing could be more obvious in its intended purpose than the non-accidental choice of Leesburg, Virginia, for the latest iteration of the tiresomely familiar “Legacy of Slavery” theme in the New York Times.

If you are not a Southerner, or if you pay no attention to the New York Times, you may be unfamiliar with that newspaper’s long tradition of invoking slavery, the Civil War, and Jim Crow as a means of insinuating the South’s permanent status of moral inferiority. As a native of Atlanta — and by “native,” I mean, literally born there, as opposed to most of the city’s current residents, who moved there from up North somewhere — this sense of hereditary stigma is something I’ve resented since I was old enough to notice it. Because our national media establishment is mainly headquartered in New York, this insulting anti-Southern prejudice is taken for granted by most journalists, who seem incapable of reporting any story below the Potomac River without bringing up lynching, segregation, or some other way of implying that the Original Sin of racism forever defines the South.

Nothing is more certain to convince a Manhattan liberal that black people are victims of white racism than to tell them a story set in a Southern locale.

Certainly it was not an accident that when the New York Times wanted to do a story about “cancel culture,” involving a white teenager who was castigated for using the dreaded n-word on social media, they chose such a situation in historic Leesburg, Virginia. In the 13th paragraph of Dan Levin’s 2,400-word feature article about the plight of Mimi Groves, he describes her as “among many incoming freshmen across the country whose admissions offers were revoked by at least a dozen universities after videos emerged on social media of them using racist language.” But the New York Times didn’t do a feature story about Nate Panza of Watchung, New Jersey, or Sean Glaze of Springfield, Ohio, students who have experienced “cancellations” for similar reasons as Miss Grove. However many white kids might be punished for saying the n-word New Jersey or Ohio, such locations would not give the New York Times an opportunity to apply its trademark “Legacy of Slavery” theme.

Leesburg, the reader is told in the third paragraph of Dan Levin’s article, is “a town named for an ancestor of the Confederate general Robert E. Lee and whose school system had fought an order to desegregate for more than a decade after the Supreme Court’s landmark ruling.” The theme is reiterated about a dozen paragraphs later:

Leesburg, the county seat of Loudoun County, lies just across the Potomac River from Maryland, about an hour’s drive from Washington. It was the site of an early Civil War battle, and slave auctions were once held on the courthouse grounds, where a statue of a Confederate soldier stood for more than a century until it was removed in July.

In a story about white teenagers using racial slurs, this is a way for the New York Times to imply blood guilt, as if the incident that brought Miss Grove to the newspaper’s attention was self-evidently hereditary, a continuation of local tradition. But no one familiar with contemporary youth culture could be so easily deceived. The white kid who says the n-word in 2020 is nearly always borrowing the term from hip-hop culture, where it is used in rap lyrics in such a way as to be equivalent to “dude” or “buddy.”

This was exactly what Miss Grove had done, as a 15-year-old freshman at Heritage High School in 2016, when she flashed her newly obtained learner’s permit in a Snapchat video and said, “I can drive, n—.” No one who knew her believed that Miss Grove intended this as an expression of racial hatred, and for nearly four years, this three-second video clip attracted no public attention or criticism. But in June, after the eruption of Black Lives Matter protests in the aftermath of George Floyd’s death in Minneapolis, one of Miss Grove’s classmates circulated this 2016 video and thereby wrecked her life. Having become senior captain of her high school’s varsity cheerleading squad and won admission to the University of Tennessee, Miss Grove was forced to abandon her collegiate plans.

How is Robert E. Lee to blame for this? The New York Times doesn’t bother to explain, because it is assumed — both by the newspaper and its readers — that the guilt of white Southerners is self-evident. All that is necessary is to throw in a few sentences making reference to local history, and the entire white population of any Southern community is subject to denunciation as collectively “racist” at a moment’s notice. It doesn’t even matter if they moved there from out of town, as is the case with most of Loudon County’s population.

This is something no New York Times reader would have any reason to suspect, if they knew nothing more about Virginia than what they read in Dan Levin’s article. As recently as 1990, the population of Loudon County was less than 90,000; today, more than 400,000 people live there, most of whom are not even natives of Virginia. Not only has Loudon County become home to many recent arrivals who commute to jobs in or near Washington, D.C. — the nation’s capital is about 40 miles southeast of Leesburg — but also people working in the technology corridor near Dulles International Airport, a little more than 15 miles south of Leesburg.

Go back a couple of decades, and most of the news about Loudon County was about the community’s ultimately futile struggle against suburban sprawl. The locals wanted to preserve the rural landscape — all those horse farms and wineries up there in the Blue Ridge foothills — and so there were zoning battles and hard-fought county commission votes that kindled more bitterness than whatever memories of the Civil War might still linger around Leesburg. Nowadays, the area has been utterly overrun with townhouse developments and shopping centers, as the county’s population has more than doubled in 20 years. But if all you know is what you read in the New York Times, you’re entirely ignorant of this recent (and far more relevant) history of Loudon County.

A perverse hatred toward the South is routinely manifested in coverage of the region by the New York Times. Who can forget, for example, how they ginned up a phony firestorm over bogus rape accusations against the Duke University lacrosse team? If a bunch of white college boys were accused of sexually assaulting a black stripper, the mere fact that Duke was located in North Carolina was sufficient for the editors of the New York Times to presume the accusation must be true. Never mind, of course, that the lacrosse players were from up north. Merely by attending school in the South, they became complicit in the blood-guilt melodrama of “institutional racism.” By the time the truth came out — after the stripper Crystal Mangum was exposed as a liar, and the prosecutor Mike Nifong was disbarred — the narrative of “white privilege” in a Southern college town had already been set in concrete, thanks to biased early coverage from the New York Times.

One of the great ironies of that 2006 rape hoax is that it provided a crucial training ground for Stephen Miller, who was a Duke senior at the time, and subsequently became the most influential aide in President Trump’s administration. A native of California, Miller used his column in the Duke Chronicle to rally support for the lacrosse players. “Our fellow students are not on trial because of evidence, but in spite of it,” Miller wrote in November 2006 column. “This is a moral, social and legal outrage. It is an assault on our peers, our community and the core values of our nation.” Indeed it was, and the real long-term significance of that case was how it highlighted the role of media bias in fomenting racial division with tendentious and dishonest narratives told through a lens of “social justice.”

Nothing is more certain to convince a Manhattan liberal that black people are victims of white racism than to tell them a story set in a Southern locale. That’s why the New York Times didn’t devote 2,400 words to white teenagers who said the n-word in New Jersey or Ohio or anywhere else but Virginia, in a town whose very name invokes Confederate symbolism. Never mind the fact that Leesburg is now just part of the massive suburban sprawl surrounding Washington, D.C., and also never mind the fact that Mimi Grove was just throwing out some hiphop slang for her teenage friends on Snapchat. No, readers of the New York Times are supposed to assume that Miss Grove’s use of the n-word is reflective of the history of Loudon County stretching back decades or even centuries into the past. This is the time-proven method by which liberal media maintain the blood-guilt narrative of Southern wickedness as a permanent fixture of American journalism.

Miss Grove feels that she has been wrongfully persecuted, but doesn’t seem to understand that the destruction unleashed against her, as an individual, is part of a larger and more general project of destruction. This is why her apologetic disavowals of racist intent can do nothing to restore her damaged reputation, no more than any white Southerner can hope to escape destruction by repudiating his Confederate ancestors. Blood guilt doesn’t allow for individual innocence, and when ideologues seek to demonize a collective group — the way Southerners are scapegoated by the New York Times — there is no safety in contrition.

What happened to Mimi Grove will soon be forgotten, but what about the way Dan Levin has defamed an entire community? He regales his readers with tales about pervasive racism in Loudon County schools — a “hostile learning environment” for non-white students, it is alleged — and implies that this problem is somehow inherited from the community’s Confederate past.

But it wasn’t Robert E. Lee who uploaded that Snapchat video, and Mimi Grove is no rebel-flag-waving Southern belle. She’s just a typical suburban teenager living in a gated community next to a golf course. Nevertheless, to quote a certain song, “old times there are not forgotten,” because the New York Times will never let us forget. And yet the damned Yankees wonder why we hate them so much.