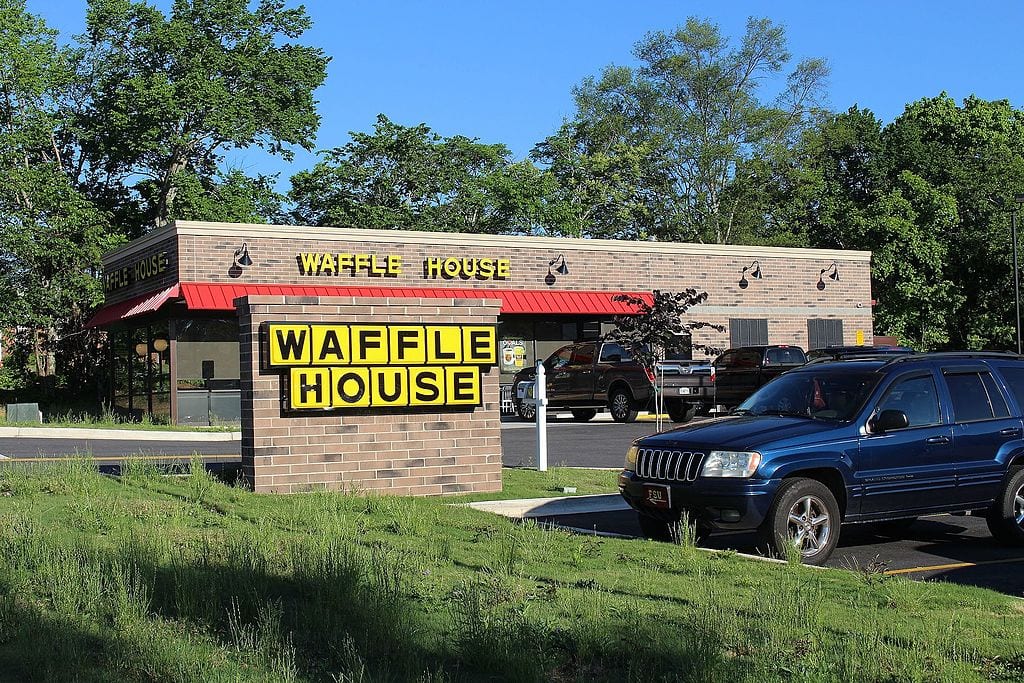 A few days ago, a man with a long history of mental illness and violence shot and killed four innocent people at a Waffle House in Tennessee. It’s horrifying and yet another example of why no civilian needs an AR-15 or a facsimile. It’s just sickening. I’m a Second Amendment guy, but no one needs a gun that just begs the owner to start shooting people.

And to do this horror show in a Waffle House… that’s true insanity. The Waffle House is the essence of the peaceful flyover country and everything that’s good about heartland America, especially in the southeast.

In case you’ve never had the pleasure of eating in a Waffle House, let me tell you about what each of the 2,100 of them is like.

They’re one story, extremely sunny, old fashioned cafes with a fountain and swiveling stools, and then many booths, some of them too narrow from seat to table for us fat old people. They’re in rural Dixie, on roads that look as if they should still have horses and hay wagons. They are often the only restaurant at a freeway exit. They’re always brightly lit with plenty of free parking.

Waffle House food is sinfully delicious. It’s mostly pancakes and eggs of all kinds and bacon and sausage and, of course, grits and waffles. It’s the kind of food that virtually sings “The Star Spangled Banner” when the always polite help places it in front of you. Drenched in pancake syrup and butter, it is as delicious as anything at any restaurant in Manhattan or Malibu can be.

And it’s free — or so inexpensive that it might as well be free. A special, available 24 hours, 365 days a year, is eggs, bacon or sausage, toast, grits, a waffle (of course) and OJ. All of this is about ten dollars last time I checked.

Every kind of person eats at the Waffle House. It’s got farmers in coveralls. Ministers coming from Sunday services in their new Target suits. Teenagers stopping for a milkshake after the Homecoming Formal. Old economists and their drivers heading for rural universities to speak. It has lonely people who need to talk to someone at the fountain and people who look like they’ve just lost their last dime and their last tenner is going to buy a great waffle before they head west to start again.

The Waffle House is the closest we come in this country right now to a general store with a hearth and a wood stove where neighbors can sip a cup of coffee or talk politics or gossip about romance or speculate on how Alabama will play this coming year.

In the small towns of the South, there’s a saying, “If you don’t want it talked about at the Waffle House, don’t do it.”

Look, the human life is sacred and heaven damn that man who took four of them at the Waffle House in Tennessee last week. But the Waffle House has its own kind of divinity and it’s just an outrage that the peace of small town America or medium sized city America was wrecked by a nutcase with a gun he should never have had at a place where peace, not hollow point .223 caliber bullets, is what’s supposed to be on the menu. Don’t let that psycho stop you from going to the Waffle House the next time you’re way down south in Dixie. Basically, it’s the heart of the heart of America.
And it’s awfully tasty. Open 24 hours a day, every day, and the strongest words that can be said about a hurricane or a tornado are that it’s so bad they closed the Waffle House. That almost never happens so go there right quick and stay a long time. And of course, calories don’t count.