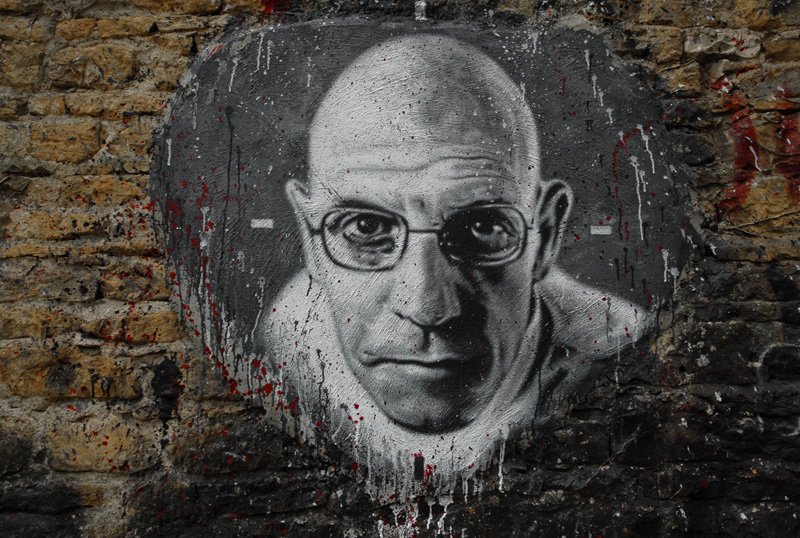 “Young children were running after Foucault saying, ‘What about me? Take me, take me,’ ” French Legion of Honor officer Guy Sorman told the Times of London about an Easter weekend trip to Tunisia during the late 1960s. “They were eight, nine, ten years old, he was throwing money at them and would say, ‘Let’s meet at 10 p.m. at the usual place.’ ”

The usual place was an unusual place: a graveyard. There, the living grossed out the dead. “He would make love there on the gravestones with young boys,” Sorman explains. “The question of consent wasn’t even raised.”

There, participants willing and coerced engaged in a pantomime of Foucault’s postmodernism, a philosophy in which power, not truth or ethics or justice, mattered above all, above a captive audience of the disgusted departed.

Lives of Michel Foucault author David Macey writes about Sidi Bou Said: “The village was characterized by a cosmopolitanism which has been likened to that of Lawrence Durrell’s Alexandria, and was home to a bohemian society of ‘diplomats, bogus spies and real tramps, artists and adventurers’ living among its Turkish-style minarets and Arab cafés. It was a society ruled by the twin cults of sensuality and friendship, and had a tantalizing decadence about it.” Durrell’s Alexandria Quartet describes a sex-drenched time and place that indulged in shocking behavior, including pedophilia. That revolting, damaging violation of a child by an adult works as postmodernism — power uber alles — in practice.

The French philosopher particularly interested himself in institutions that suppressed deviancy — prisons, mental hospitals, conventional morality — and sought to erode their power. As the “Down with the University” chant at a late-1960s campus uprising he participated in suggested, he sought a similar fate for academia. One student takeover he joined witnessed him throwing bricks at cops from a rooftop. As department head he hired a professor, also openly inclined to the destruction of higher education, who subsequently granted course credit to strangers she encountered on the bus. When the caliber of his Vincennes University students waned, and the activist Frankenstein he helped create began disrupting his lectures, he bolted to leave others to clean up or lie down in the mess.

This pattern followed in his delusional promotion of the Islamic Revolution in Iran and championing of the cause of convict–poet cause célèbre Roger Knobelspiess, who, after securing a release, went on a robbery spree and engaged in a shootout with the police. Critics joked that Foucault deserved a “Knobel” prize for his efforts. Foucault projected ideological fantasies upon current events of which he knew little save for his imagined a priori expertise. The production of truth could not power Knobelspiess into an upright citizen or the Ayatollah Khomeini into a Vermont-style town meeting member. And it could not save Michel Foucault from the dangers inherent in his ideas.

Beyond Tunisia, his travels included San Francisco, where he immersed himself in S&M clubs and bathhouses despite the specter of a new disease unconcerned with notions of power’s ability to produce truth. He dismissed AIDS as a figment of the imagination of “American Puritanism.” Foucault’s longtime partner believed he knew he carried the disease even as he partook in rounds of anonymous sex. Not all of his sex partners seemed bothered. “I die happy,” one remarked, “because I was infected by Michel Foucault.” Years after claiming, “I hope I’ll die of an overdose of pleasure of any kind,” Foucault fulfilled this ambition.

“When Michel Foucault died in Paris on June 25, 1984, he had achieved a popularity in the English-speaking world matched by no other contemporary theorist,” UC-Berkeley Professor Robert Holub wrote in The German Quarterly soon after his passing. Despite Foucault’s death occurring nearly 37 years ago, Google Scholar counts 407,662 citations of him since 2016. Harvard University’s course catalog includes 24 classes offered this current academic year in which Foucault appears in the description. Foucault’s imprint shows even in people, unaware of him all these years later (see the popularity of “Rest in Power” as a response to George Floyd’s death), who fetishize power, ironically preached by a man whose practice of license ultimately left him with neither.

If Foucault seems far from Christlike this Easter weekend, then it is worth remembering that a biographer found the comparison so compelling that he titled his 1993 study The Passion of Michel Foucault. On a weekend in which people renounce the glamour of evil in gatherings around the world, the mixture of fashion and philosophy wearing the Kojak-clean head, trademark turtleneck, occasional Fonzie jacket, and Euro-weird glasses looked the part. He also, in openly contending that children can too consent and lobbying for the abolition of French age of consent laws, talked his walk.

Foucault’s classroom ideas (really just desires intellectualized), contradicted by the Grim Reaper’s last-word rebuttal, did not work in the real world. He achieved the downfall of the university not by violent campus takeovers or hiring crackpots dispensing academic credit on public transportation. It came through the fact that a child rapist killed by the reality he dismissed as socially constructed convinced a massive portion academia to cite him, assign him, and praise him. How to take such people seriously let alone as seriously as they take themselves?

Pedophilia remains but one way to damage young people.