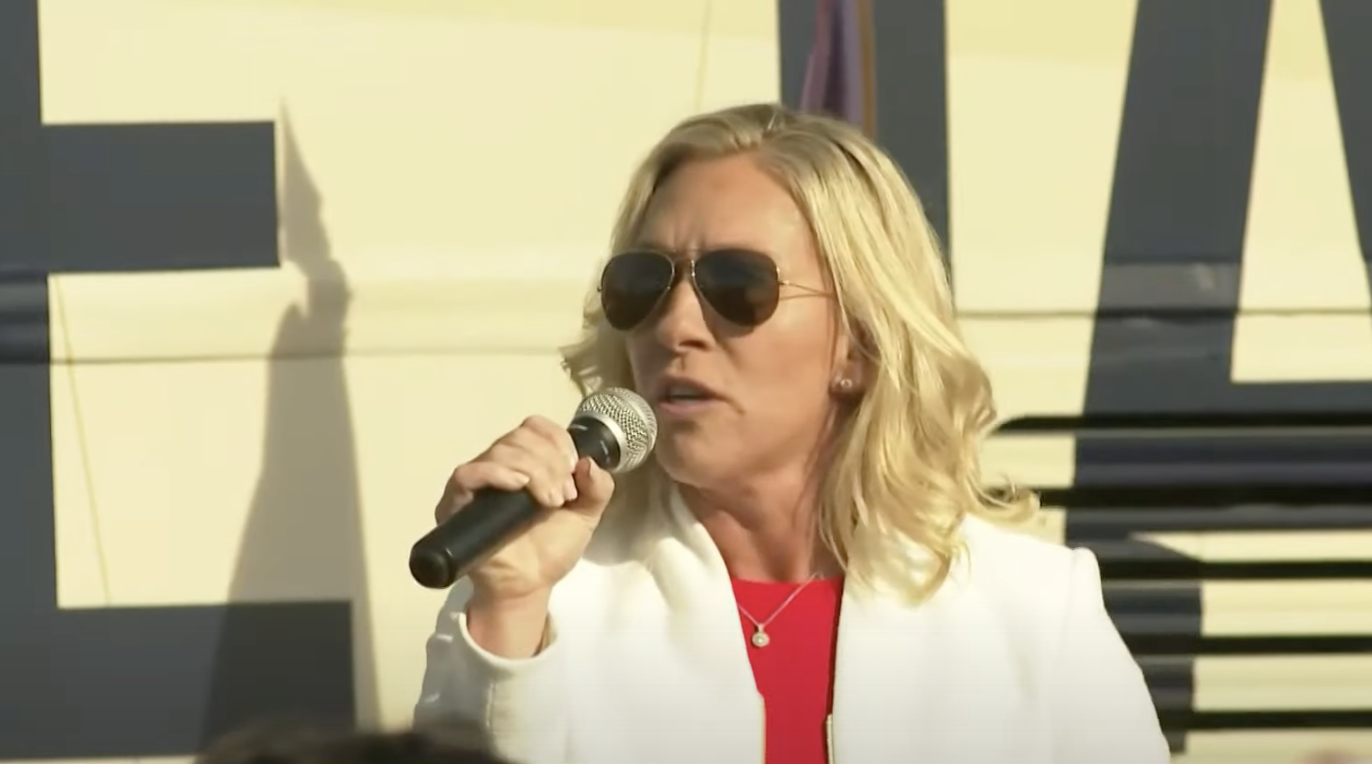 What can I say? From day to night I read Mainstream Media attacks on Rep. Marjorie Taylor Greene (R-Ga.). The quotes and tweets ascribed to her raise eyebrows. Is she a nut job? The Mainstream Media agree that she is. The Democrats agree. So do Mitch McConnell and Mitt Romney. But all of those reporters and politicos, shall we say, have lost a bit of credibility over the past four years. And, besides, if McConnell is correct that Greene is a “cancer” for the GOP, then Rashida Tlaib is the bubonic plague and Ilhan Omar is blood-frogs-lice-mixed species-pestilence-boils-hail-locusts, etc.

Inasmuch as I am an Orthodox rabbi, I obviously get annoyed every time some new crazy thing is spread about Jews. Did Greene really say that “the Rothschilds” were going to start wild fires in California with some “Jewish laser beam” from the sun? Hmmm.

Crazy People always go after “The Jews.” It’s a shame because, like the boy who cried “Wolf!” they give an opening to others to yell false charges of “Anti-Semitism!” when good Americans very legitimately go after the evil George Soros. Soros indeed is evil. He has used his money for evil, in contrast from how the recently departed righteous Sheldon Adelson of blessed memory used his money to advance good in so many ways. It is not at all anti-Semitic to attack George Soros. I do it all the time, as do millions of Jews who love America. Not surprisingly, many prominent Jews call Soros an “anti-Semite” because he is a major enemy of Israel’s policies, in league with some of her worst enemies.

Inasmuch as some Crazies go after “the Jews” in crazy ways, they create interference and protection for those on the Left eager to pounce on anyone who calls out the evil George Soros.

There are all kinds of Jews. Every single poll and survey in Israel — the only Jewish country in the world — shows that their forthcoming March 23 national election will see 70 percent of all votes cast for right-wing parties. Since that polling includes Arab voters, the polling more starkly shows that approximately 80 of the approximately 110 parliamentary seats that will be won by Jewish parties in March will go to the right wing. That is 72.7 percent right wing among the Jewish voters. Can American Catholics say that they are 72.7 percent right-wing? Can American Protestants? The Jews in the United Kingdom are the British conservative party’s highest-percent demographic. The Jews of the former Soviet Union, from Russia to Ukraine to anywhere there, are the most anti-Communist people anyone ever will meet.

So it is tough to generalize about Jews. Milton Friedman, the intellectual architect of modern American conservative economic theory, was Jewish. Alice Rosenbaum — OK, pseudonymed Ayn Rand — conceived libertarianism and was Jewish. The Coalition for Jewish Values, on whose leadership executive I sit as a Senior Rabbinic Fellow, is comprised of 1,500 Orthodox rabbis who are deeply conservative on issues of American public policy. Indeed, Orthodox Jews are so deeply conservative that more than 90 percent just voted for Donald Trump. Jews include the likes of Mark Levin — the Great One broadcasting from the underground command post deep in the bowels of a hidden bunker somewhere under the brick and steel of a nondescript building. And Dennis Prager. And Ben Shapiro. And Jeff Jacoby. And Michael Savage. And Norman Podhoretz. Add to that Caroline Glick, Lucianne Goldberg, David Horowitz, Pamela Geller, Ben Stein, the late Andrew Breitbart, Noah Pollak, and Dov Hikind. Add the most powerful voices in American Orthodox public commentary, like Rabbi Aryeh Spero, Rabbi Meir Soloveichik, Rabbi Avrohom Gordimer, Rabbi Steven Pruzansky, and Rabbi Yaakov Menken. Add the National Council of Young Israel, an umbrella body of 25,000 families and 175 synagogues. The Zionist Organization of America. The largest-circulating independent Jewish newspaper in America, the Jewish Press. The prominent online English-language news source Israel National News, which covers American news in its news and opinion sections. Jewish World Review, an amazing collection of conservative voices. So the stereotype is darned unfair.

And, yet, reasonable and fair-minded non-Catholics do not stereotype all Catholics in the way that, in a dark American era, the Ku Klux Klan did. We see through the “as a Catholic” gambit and charade because there are the others who not only follow the dogma and teachings of Catholicism but who actually do live it as it is theologically constructed, and they promote their faith prominently and proudly. Our own views are impacted not only by Catholics on the left but also by those on the right, such as Sean Hannity, Laura Ingraham, the late Justice Antonin Scalia, Justice Clarence Thomas, Justice Samuel Alito, Rick Santorum, Jon Voight, House Minority Leader Kevin McCarthy, Sen. James Risch, Sen. Marco Rubio, Sen. John Hoeven, Rep. Peter King, Rep. Devin Nunes, Rep. Steve Scalise, Newt Gingrich, and so many others.

So it is unfair to generalize about people. And when the Crazies go for “The Jews,” we simply are society’s “canary in the coal mine.” They don’t stop with us. They never do.

So if dear Rep. Marjorie Taylor Greene really believes what the Mainstream Media say she believes about Jews, that’s not cool. If she thinks that “Jewish lasers” in space — under the aegis of “Rothschild Inc.” — start wild fires in California, then she’s a nut job.

Thing is, I never heard of “Rothschild Inc.” I assumed it was a code word for — y’know — my Peeps. What would I know? I am only a synagogue rabbi of nearly 40 years, sat on the executive committee of the Rabbinical Council of America for six years, play that role at Coalition for Jewish Values, was a national vice president of the Zionist Organization of America, and other Jewish stuff. So what would I know? And then, the other day, someone told me that there actually is a company named that name. And some non-Jewish guy from the California electric utility PG&E — Pacific Gas and Electric — apparently sits on their board. And, as part of California’s uber-environmental programming that causes us rolling blackouts all the time, California has required the electric company to cut back severely on maintenance and research and development of traditional electric sources, aiming instead to capture energy from the sun. So, I guess, if someone is a bit of a nut job to begin with, and hears that a PG&E guy — again not even Jewish — sits on the board of a company named “Rothschild,” and that guy is a biggie at PG&E, and PG&E is trying to capture solar energy from — d’uh! — the sun, I guess I can see where that craziness comes from. It’s like almost all the parts: the bells are clanging, the sirens are blaring, the lights are flashing — it’s just that the train ain’t coming,

Thing also is, not every company named “Rothschild” is out there controlling the world for us Jews. Or, if they were, I am not sure why they keep it a secret from me, a guy who has paid his Jewish dues many times over. There is Rothschild Noritake china. (Uh-oh: they control china?) There is the Rothschild berry farm. One Rothschild created a dance troupe. Another hanged himself, unaware he controls the world. Not long ago, some worm in the NBA, DeSean Jackson, a former professional basketball player, retweeted news that Jews were trying to divide the Black community. No better way to fight racism than to promote Jew-hatred! And in the course of apologizing to Don Lemon on CNN for all his anti-Semitic posts, Jackson said, “You know who the Rothschilds are? They control all the banks. They own all the banks.”

And how come, if we Jews control all the banks, it takes two months and more — and endless demands for more documentation — for me to get approved on refinancing my mortgage?

But here’s the thing: If Nancy Pelosi and Ocasio and her Goon Squad are so intent on evicting Marjorie Taylor Greene from the House of Representatives, how about all the other nut jobs and bat-crazy bigots and Jew-haters there?

It is time for parity. Republicans rapidly demote nut jobs, deny them committee assignments, and primary them out. By contrast, Democrats promote and elevate their certified loons. Maxine Waters — have you ever listened to this nut? Try this. Or take Ilhan Omar — Ilhan Omar cheated on a husband or a brother or whatever she was married to, pumped millions of campaign and COVID-relief funds into a company owned by a married guy who promoted her campaign, and then married the guy away from his wife. She also is a Jew-hater deluxe — even got voted the Year 2019 Anti-Semite of the Year. Meanwhile, Rashida Tlaib was a columnist for a Farrakhan publication and tweets a storm of anti-Israel invective with anti-Jewish tropes. When it comes to anti-Jewish hatred, no one in Congress can hold a candle to Tlaib and Omar. Thus, Rep. Burgess Owens is correct: Tlaib needs to be penalized severely over her ongoing anti-Semitism.

In a House of Representatives that has too many nut jobs who bring shame on our Congress, both Tlaib and Omar put Marjorie Taylor Greene to shame. It is a House filled with nut jobs. These are just the topping. Tlaib and Omar have been given several years to recant their hate, but those anti-Semites won’t budge. Why are they treated with kid gloves? When will Mitch and Mitt demand that those two Jew-haters be ousted?

Dov Fischer
Follow Their Stories:
View More
Rabbi Dov Fischer, Esq., a high-stakes litigation attorney of more than twenty-five years and an adjunct professor of law of more than fifteen years, is rabbi of Young Israel of Orange County, California. His legal career has included serving as Chief Articles Editor of UCLA Law Review, clerking for the Hon. Danny J. Boggs in the United States Court of Appeals for the Sixth Circuit, and then litigating at three of America’s most prominent law firms: JonesDay, Akin Gump, and Baker & Hostetler. In his rabbinical career, Rabbi Fischer has served several terms on the Executive Committee of the Rabbinical Council of America, is Senior Rabbinic Fellow at the Coalition for Jewish Values, has been Vice President of Zionist Organization of America, and has served on regional boards of the American Jewish Committee, B’nai Brith Hillel, and several others. His writings on contemporary political issues have appeared over the years in the Wall Street Journal, the Los Angeles Times, the Jerusalem Post, National Review, American Greatness, The Weekly Standard, and in Jewish media in American and in Israel. A winner of an American Jurisprudence Award in Professional Legal Ethics, Rabbi Fischer also is the author of two books, including General Sharon’s War Against Time Magazine, which covered the Israeli General’s 1980s landmark libel suit.
Most Popular
1
Hither and Yon
Here’s What Happens When Democrats Abandon a City to Crime
by Scott McKay