by George Neumayr
The Emancipation Memorial in Boston, March 1, 2019 (Dominionart/Shutterstock.com) 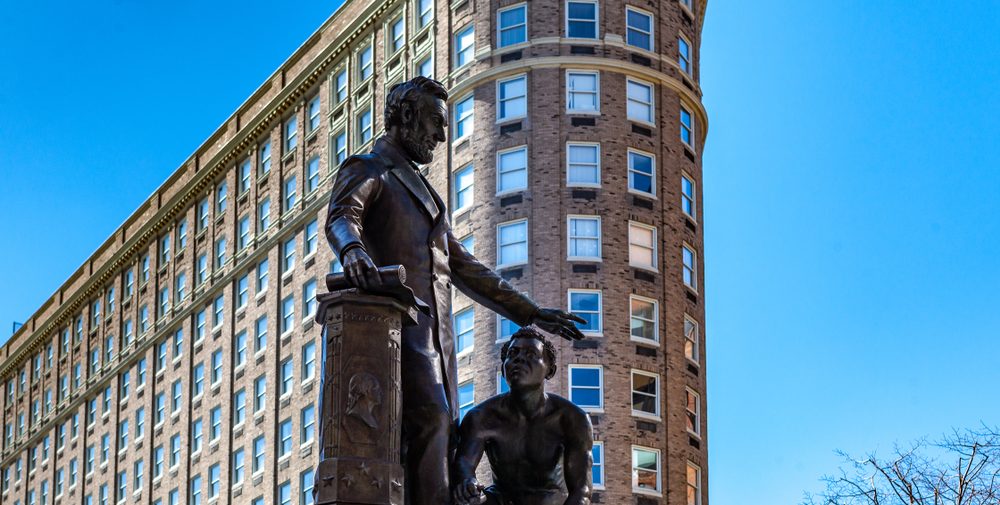 Liberals cheered the news this week that a statue of Abraham Lincoln had been taken down in Boston. The statue depicted Lincoln holding his hand benevolently over a liberated slave. Though paternalistic themselves, liberals had no patience for the statue, which they pronounced “harmful.” That freed slaves had helped pay for the statue didn’t impress them. While liberal esteem for Lincoln declines in Boston, it rises for Teddy Kennedy. Boston boasts an “Edward M. Kennedy Institute,” which recently honored New York Gov. Andrew Cuomo for his “coronavirus leadership.”

Lincoln isn’t faring much better in other liberal cities. In San Francisco, a committee of its public school district is calling for the removal of his name from a high school. The “renaming” committee is also offended by schools named after George Washington, Thomas Jefferson, and various Spanish explorers.

But one San Francisco school that won’t be renamed is the “Harvey Milk Civil Rights Academic Elementary School,” despite Milk’s reputation as a corrupter of youth.

Liberals are nothing if not flexible in their moral judgments. Yet they can’t cut any slack to the heroes of the past unless they serve the politics of the present.

It has become fashionable during Trump’s presidency for liberals to posture as great defenders of the purity of youth. A “vulgar” Trump is setting a “bad example” for children, they say gravely. It is an odd stance for liberals to take. Usually libertine, they pride themselves on exposing children at earlier and earlier ages to discussions of abortion, transgenderism, and the like. It is hard to see how Trump could have corrupted children any more than they have.

During the campaign, Biden often took a censorious line against Trump, fretting over the “soul of America,” even as he gave an interview to the singer Cardi B, whose songs regularly include appallingly obscene lyrics. The coarsening of American culture that she represents doesn’t bother him. Indeed, the Democrats have become the party of filthy rap music, as evident in the recent campaign rally in Georgia, where BRS Kash performed for Jon Ossoff and Raphael Warnock. The Atlanta Journal-Constitution (AJC) reported on the rally for the two Democratic candidates for the U.S. Senate:

BRS Kash, whose latest single is sexually explicit, switched up the lyrics to fit the theme of the day.

“Let’s all go to the poll, it’s about time to catch the vote,” he crooned. “Vote babyyyy.”

Shortly after the AJC reported on the concert, Republicans took to Twitter to criticize BRS Kash’s inclusion on the program. They surfaced questionable posts the 27-year-old rapper made on social media, including a screenshot of what appeared to be a post from 2012 that referenced sexual assault.

“This is who Georgia Democrats Raphael Warnock and Jon Ossoff had headline their event today,” National Republican Senatorial Committee spokesman Nathan Brand said. “Will they denounce this disgusting individual?”

No, they won’t. Democrats have long given an exemption to rappers. No doubt the Biden administration will open up the White House to them, as Obama did.

Liberals are nothing if not flexible in their moral judgments. Yet they can’t cut any slack to the heroes of the past unless they serve the politics of the present. A Teddy Kennedy is still useful to them, but Lincoln isn’t. So they lionize the one and smear the other.

It is also telling that liberals are far harsher about American historical figures than foreign ones. The same liberals who cry out for the toppling of Lincoln statues softly eulogized Fidel Castro, praising him for his contributions to health care and literacy. Liberalism’s unsparing moral judgments are somehow suspended in the cases of left-wing revolutionaries. Liberal protesters can scream about Lincoln while wearing Che Guevara T-shirts.

Nancy Pelosi, who embodies the selective iconoclasm of liberalism, breezily endorsed the toppling of statues earlier this year. “People will do what they do,” she said. But her contempt for the unenlightened figures of the past doesn’t extend to Margaret Sanger. In 2014, she happily received an award in Sanger’s name from Planned Parenthood. Pelosi said that she was “honored” to receive it. No prominent liberal has dared to demand that she give it back.

While liberals clutch such awards, they pour scorn on the now-unfavored figures of the past, whose blemishes pale in comparison to those of progressive icons — proof not of liberalism’s superior morality but of its endless appetite for ideological purges.

George Neumayr
Follow Their Stories:
View More
George Neumayr, a senior editor at The American Spectator, is author most recently of The Biden Deception: Moderate, Opportunist, or the Democrats' Crypto-Socialist?
Most Popular
1
Daily Folios and Consecutive Sentences
On Trump, Kanye, Biscuit, Jews, and Dinners
by Dov Fischer