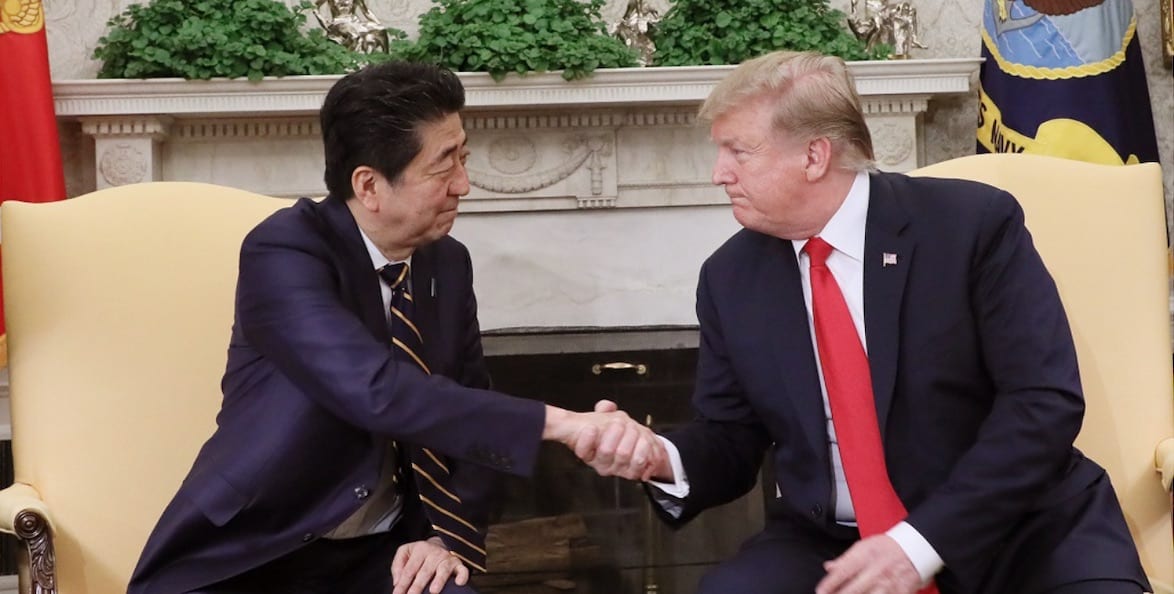 I’m a fan of Ross Kaminsky, who is one of our better contributors here at The American Spectator, but his piece over the weekend griping at President Trump for his rather dramatic outbursts Friday on the U.S. economy simply missed the mark.

Kaminsky was, perhaps justifiably, exasperated when Trump did two things that were — let’s call them — unusual for a president to do. First, in response to China’s elevation of the trade dispute with the United States, which continues to gain steam, Trump “ordered” American companies manufacturing products in China to find alternative venues. He then chided Federal Reserve chairman Jerome Powell, whom Trump has been pressuring (so far unsuccessfully) to lower interest rates, by asking whether Powell wasn’t a bigger threat to American economic growth than Chinese premier Xi Jinping.

Kaminsky lost it over those two tweets, declaring that Friday was a “particularly bad day for the United States,” and characterized Trump as “panicky.”

By Sunday, however, Trump was announcing a deal in principle to sell several billion dollars’ worth of agricultural products, specifically corn and soybeans, to Japan and thus reduce slack produced by Chinese tariffs on American farm goods.

We commonly need reminders, it seems, that Trump doesn’t operate like a politician. He’s a negotiator, and he doesn’t care about diplomatic or geopolitical niceties.

He knows he’s going to be regarded as a bully or a buffoon by both the U.S. and international media, and he doesn’t care. He also knows that using unconventional language on Twitter is an attention-getter in the way the usual soft language of international trade and diplomacy is not.

So when Trump “orders” American companies to get their supply chains out of China, we come back to the now-familiar refrain that he needs to be taken seriously rather than literally. Yes, there is an interpretation of what Trump said that is literally operative, in that the federal International Emergency Economic Powers Act would give him power to impose consequences on companies not heeding his statement. But that’s not what he was getting at.

As Andy Puzder, who was a nominee for Labor Secretary at the beginning of the Trump administration, wrote at Fox News over the weekend, what the president was doing was calling attention to something that is already happening — namely, the flight of American capital and supply-chain operations out of China, and encouraging it to accelerate as rapidly as possible. Quoting Puzder:

Companies, including some of the largest American retailers, are starting to flee China in droves. HP, Dell, Microsoft, Amazon and other American electronics giants are shifting production out of China. Even the crown jewel of American production in China, Apple, is reportedly looking for a better place to make its iPhones.

The pressure Trump has imposed on China is working. Chinese manufacturing companies are reportedly getting “desperate” as the communist country experiences its first real economic pain in decades. Meanwhile, the American economy and jobs market remain strong. When Trump announced on Twitter that he was “ordering” companies to “start looking for an alternative to China,” he was encouraging a process that had already begun on the ground.

Think of this in terms of negotiation tactics. Sure, Trump’s language might be more bombastic than most would be comfortable with. But he’s aiming to make his interlocutor, which is not the American people in this case but the Chinese Communist Party, as uncomfortable as he can.

And we all know that American companies have been abused, and badly, in their dealings with China. To avail oneself of the Chinese market is to essentially agree to have your intellectual property stolen, and the Chinese have engaged in practically every predatory trade policy they could over the last 30 years. That’s why, as Puzder notes, many American companies are looking to get clear of China — the experience hasn’t been what they’d hoped.

Trump has made it clear that China’s price for a trade war with America is far stiffer than ours. The Japanese farm products deal shows that Trump can find markets for American products if the Chinese — whose trade surplus with us has been the primary fuel for their economy since Tiananmen Square — attempt to cut us off. And the next step is punishing China with tariffs while draining that American capital and supply chain, which will benefit Southeast Asia, India, and Latin America if not directly American workers. Either way it goes is a net win for us, as our consumer dollars won’t be used to enrich a corrupt and totalitarian regime it’s clear is hostile to our interests.

Trump is imposing economic pain on China that isn’t really affecting American consumers. Trump’s tariffs so far are in the tens of billions of dollars, a drop in the bucket in this economy, and most of that cost is being absorbed by China in the form of a devalued yuan. As those supply chains are reorganized outside of China, the pain will be set in cement: those companies won’t be coming back.

Yes, the concern is that China will wait Trump out, and engage in the kind of meddling in the 2020 election the Democrats accuse the Russians of having done in 2016 (which would come with ample precedent given that much of U.S. trade policy Trump is unraveling was set in the 1990s, when Bill Clinton, who was generously and illegally financed by the Chinese, was in the White House). It’s not unreasonable to be nervous about that, because make no mistake: Xi and the Chinese would absolutely love to have a Liz Warren, Bernie Sanders, or Joe Biden across the table, and they’ll work to make that happen.

But we should have a little faith that Trump can produce a result that works for the country here. There are already rumblings that by the end of the year he’ll have a monster trade deal with Britain. He’s entered into a trade dispute with India over that country’s tariffs on American goods, which as we know tends to be an opening salvo to negotiations. By next year it’s a good bet Trump will have shaken loose enough in the way of international agreements to replace whatever is lost in the Chinese trade war — and if the recession the media and Democrats are now cheering for doesn’t materialize, there will be an awful lot of egg on a lot of faces.

All this is not intended to trash Kaminsky. But now is the time to keep the powder dry and let Trump work.

Especially considering that it’s really just a matter of time before China unleashes the dogs of war against the freedom fighters in the streets of Hong Kong who are protesting the loss of individual liberty to Xi and his thugs.

If you’ll allow me, I’d like to take a moment to brag on the East Bank All-Stars, the Little League team from River Ridge, Louisiana, which blew through the Little League World Series and took home a world title by crushing Curaçao 8-0 on Sunday.

That team might be the best Little League club I’ve ever seen. They’ve got a deep cast of pitchers, play great defense, run well, and hit like nobody at that level ever has. Reese Roussel, the right fielder on the River Ridge team, broke open the LLWS record books with an amazing 17 hits in seven games. Roussel is a name to remember, because in six years or so he’s likely to be one of the top picks in the Major League draft — or if not, he’ll be a highly rated college player. Watching Roussel swing a bat looks like watching a much older player; he’s that smooth, and he barrels up a ball like very few kids several levels above Little League.

And Roussel is one of several players on that team who will likely end up at least as college players. You can just tell with many of them — if they continue to develop, the ability is there.

Then again, I remember when I was 12. I was never the athlete these kids are, but I was pretty darned good. Then I hit a growth spurt and lost any athletic edge I ever had. Getting to 6 feet tall was great, but at the expense of becoming gawky and slow didn’t exactly work.

For now, though, these kids can revel in the fact that they’re the best in the world. It’s a great honor to a very deserving bunch. Kudos to coach Scott Frazier for putting together such a great team.

Congratulations also to Andrew Luck on the culmination of a strong pro career as one of the NFL’s better quarterbacks. Luck decided to hang up his cleats over the weekend as injuries continued to mount. Last year he was the NFL’s Comeback Player of the Year after missing 26 games, including all of the 2017 season, but calf and ankle injuries have plagued him all preseason.

Luck, at 30, doesn’t really have anything left to prove. He put together a terrific season last year and led the Colts to the playoffs, showing he still had the form which enabled him to put together playoff seasons in each of his first three years in the NFL.

He won’t be a Super Bowl quarterback or a league MVP. But as Luck said, the rash of injuries he’s suffered have taken the joy out of the game. He’s made his money, and there’s no point in breaking his body down.

For Colts fans, of course, the weekend’s news was devastating. Jacoby Brissett takes over as the team’s quarterback, and Indianapolis only won four of the 15 games Brissett started in 2017. The Colts might well be lining up for a shot at landing Alabama’s Tua Tagovailoa or Oregon’s Justin Herbert with one of the first two picks in next year’s draft.

Finally, a cocktail recipe. For those of you who’ve never been to The Roosevelt Hotel in New Orleans and had the pleasure of sitting in the Sazerac Bar, we bring you the signature cocktail from that establishment for your epicurean pleasure. With just a few weeks of summer left, here’s what’s called a Southern Gentleman:

What you do is muddle the blackberries and mint with simple syrup in a mixing glass, and then simply add the bourbon — if you don’t have Buffalo Trace, you’ll find Bulleit or Maker’s Mark 46 are reasonable substitutes — and lemon juice. Then fill with ice and shake.

It’s one of the more refreshing cocktails you’ll enjoy, particularly if the temperature is above 80.