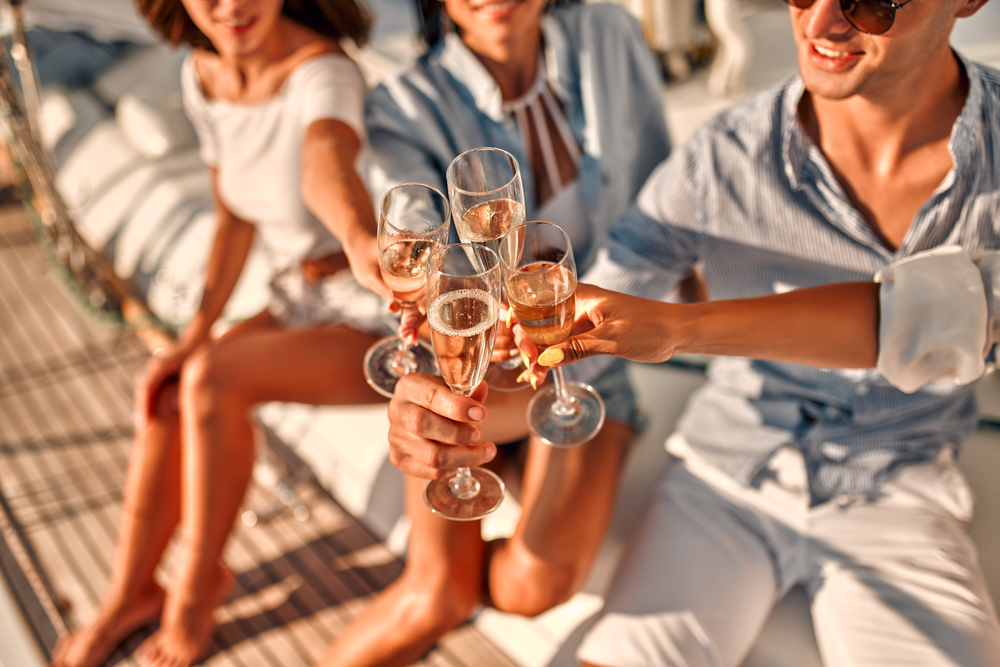 As a skipper, I hate being told what to do while on board. The girls screamed that if I accelerated too hard the towels would fall overboard. The boys howled. I accelerated in order to narrowly miss an oil tanker. The bow lifted, the stern dipped, and the crate of beer was propelled backwards until it was lost at sea. That’s how the “Welcome, Autumn!” seafaring party started off — with 10 idiots diving without tanks but with plenty of bottles.

It wasn’t too serious. Most people who get on a friend’s boat for a bender can’t wait for something to fall into the sea so that they can rescue it. Of the 30 beers we lost in the water, we recovered 83. So, I decided to throw away one of my rich friends’ wallets as well, but we were not able to find it and he is still laughing.

Yacht manufacturers obviously design these boats with catalogs in mind, not real life. Maybe that explains why they all make the same mistake: There’s nowhere to put things so that when some hothead takes the helm it doesn’t all end up at the bottom of the sea. Usually, you buy a boat to avoid falling into the sea, both you and your stuff (unless you bought a U-boat). That includes your drink, your cigars, your books, and your phone. Boat-makers only provide places to store life jackets, lifesavers, walkie-talkies, and the like. Even the most nostalgic skippers don’t bother getting on the walkie-talkie when the ship starts going down these days. Everyone announces it live in WhatsApp groups. Your friends start to worry if they see that you have left the group in the middle of a video. There is no longer any chance of drowning in anonymity, unless you start shouting on the walkie-talkie. Those devices are only good for your drunken friends to say inane stupidities when the party starts to degenerate and you are unable to find the lights indicating the harbor entrance. Had you read the handbook, you would have realized that those round red lights are not Christmas decorations for September.

Luckily, when I party, I am very selective about my friends. A boat is too small a place to be with someone who annoys you, unless you want to throw them overboard as soon as the first hungry sharks show up. My theory is that all sharks are always hungry. Yesterday I wanted to prove it to my colleagues by sticking both my hands in the sea right after throwing the sharks a couple of roast chickens, and now I’m writing this column with my elbows and nose.

At the party, we played music so loud it could be danced to all over Miami. The vibe was so seafaring that I almost put on a white sailor’s hat, but I wasn’t drunk enough for that — yet. If you get carried away, first you put on the hat, and then you end up eating cans of spinach and punching ship masts to impress Olive Oyl, who never gets the message.

Someone decided it would be a good idea to grill some lobsters on top of the gas tank. And it’s a typical occurrence that you can’t say no to because, a priori, it seems like such a smart idea. I don’t think there’s a better place to get a good fire going. And besides, it was lunchtime, and the last thing that would have come to mind would be that something could catch fire in the water. It’s as stupid as trying to light a cigarette inside a teapot. But then, when the smoke stops smelling like a seafood restaurant and starts smelling like your great-grandfather’s car engine in the summer, you realize that it would have been better to slap the live lobsters on the back of their heads and serve them as sashimi. I’m an impulsive, talented cook. I come up with good ideas, but only in emergency situations. Besides, cooking by fire is so passé. It was already done by cavemen.

On a ship everyone copies everyone else, like at weddings, with the mess of cutlery and plates. One of the girls broke out the sunscreen. The party had hardly started when everyone else started to apply sunscreen as well, shouting, “You can get really sunburned on the water!” But I touched it, and it was reasonably cold. So, the cream thing seems absurd and very dangerous to me, because suddenly everyone’s hands started to slip, keys fell into unreachable areas of the boat, and a girl who was trying to give her boyfriend a hug slipped out of his arms and into the sea. We searched for her relentlessly for almost 30 seconds. And we’ve partied on until now, as we try to borrow a piece of igloo from some Inuit to have enough ice for drinks on the way back while celebrating the results of the Italian election.

Itxu Díaz
Follow Their Stories:
View More
Itxu Díaz is a Spanish journalist, political satirist, and author. He has written 10 books on topics as diverse as politics, music, and smart appliances. He is a contributor to The Daily Beast, The Daily Caller, National Review, American Conservative, and Diario Las Américas in the United States, as well as a columnist at several Spanish magazines and newspapers. He was also an adviser to the Ministry for Education, Culture, and Sports in Spain.
Most Popular
1
Daily Folios and Consecutive Sentences
On Trump, Kanye, Biscuit, Jews, and Dinners
by Dov Fischer