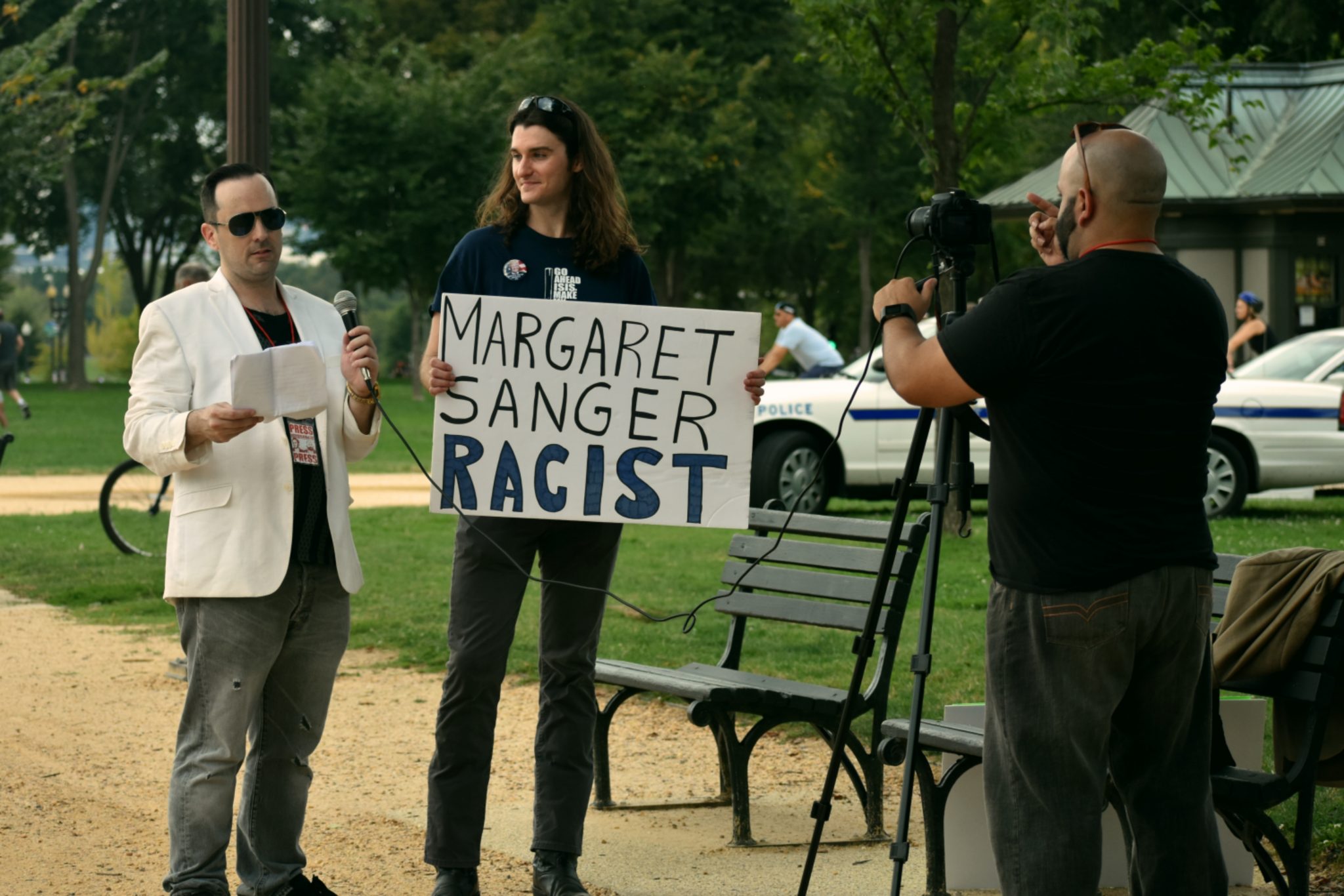 “Planned Parenthoods have been placed inside cities by white supremacists to do the devil’s work,” rapper Kanye West opined in a wide-ranging interview with Forbes.

The black abortion rate nearly triples the white abortion rate. In some cities, such as New York, African American babies face worse odds for birth than for abortion.

Yes, abortion proponents concede, Sanger spoke at a Ku Klux Klan rally, carried on friendly correspondence with segregationists, used the “n” word, and described herself as “mainly responsible for arousing interest in the negro programme” targeting African American procreation. But they insist her critics — nasty people, unlike her — take her out of context. She really did not say what they say she said, and if she did she certainly did not mean it, and if she meant it, she lived in different times, and if the different times actually differed more from Sanger’s views than the prevailing views of our times, then the woman founded Planned Parenthood, after all, which absolves her of all sin.

Unfortunately, the block-quoted Sanger comes off far worse than the paraphrased Sanger.

Consider “A Plan for World Peace,” a 1932 Sanger speech recycled as an article that borrowed from and lent to the Hitlerian zeitgeist.

The plan included a Parliament of Population established by the Congress to institute “a stern and rigid policy of sterilization and segregation to that grade of population whose progeny is already tainted, or whose inheritance is such that objectionable traits may be transmitted to offspring.” For the millions of Americans who “chose” segregation over sterilization, the plan called for “farm lands and homestead for these segregated persons where they would be taught to work under competent instructors for the period of their entire lives.”

She continued by outlining implementation:

The first step would thus be to control the intake and output of morons, mental defectives, epileptics.

The second step would be to take an inventory of the secondary group such as illiterates, paupers, unemployables, criminals, prostitutes, dope-fiends; classify them in special departments under government medical protection, and segregate them on farms and open spaces as long as necessary for the strengthening and development of moral conduct.

Having corralled this enormous part of our population and placed it on a basis of health instead of punishment, it is safe to say that fifteen to twenty millions of our population would then be organized into soldiers of defense — defending the unborn against their own disabilities.

What groups did Sanger wish to conscript to become “soldiers of defense”? One guesses based on her record that darker complexions and last names not as easy to pronounce as “Sanger” characterized the army.

Sanger blamed specific ethnic groups for the propagation of what she called “the unfit,” “human weeds,” and other dehumanizing phrases. “The Jewish people and Italian families, who are filling the insane asylums, who are filling the hospitals and filling our feeble-minded institutions, these are the ones the taxpayers have to pay for the upkeep of, and they are increasing the budget of the state, the enormous expense of the state is increasing because of the multiplication of the unfit in this country and in the state,” she told a committee of the New York state assembly in 1923. In 1912, she characterized “the Aboriginal Australian” in a socialist newspaper as the “lowest known species of the human family, just a step higher than the chimpanzee in brain development.” She zealously pushed her “negro programme” in the belief that blacks especially needed to curb their population growth.

Planned Parenthood certainly does not put its name behind explicitly racist statements as its founder did. But their business makes a statement all its own. Although whites and Hispanics both outnumber blacks in the United States, abortions of black babies outnumber abortions of both white and Hispanic babies in states that collect ethnicity data. The black abortion rate nearly triples the white abortion rate. In some cities, such as New York, African American babies face worse odds for birth than for abortion.

Margaret Sanger abandoned her children, one of whom blamed the death of a sibling on that neglect, and cheated on the men with whom she cheated on her husbands. She hated Catholics so much that she attempted to derail John Rock’s involvement in the development of the birth control pill and vowed to leave the country in 1960 if America elected John Kennedy president. She opposed birthing centers because they “would facilitate the function of maternity among the very classes in which the absolute necessity is to discourage it” and opposed charity, despite living off it, because of the “dangers inherent in the very idea of humanitarianism and altruism” that encourage “their full harvest of human waste.” She accepted donations from John D. Rockefeller Jr. after she advocated his assassination. A pill-popping alcoholic in her last decades, she died a bitter woman — and an ideal candidate, if not for her advanced age, for admittance in one of her concentration camps.

Did the founder of Planned Parenthood do the devil’s work? She certainly did not labor for some more beneficent supernatural being. Did a white supremacist Johnny Appleseed Planned Parenthood clinics in disproportionately black urban areas? Maybe ask the Grand Cyclopses and Kleagles who listened to her talk or segregationist Congressman Graham Barden, who received fawning correspondence from Sanger.

Ye, we hardly knew ye. Margaret Sanger? We knew ye even when ye masqueraded as someone else.