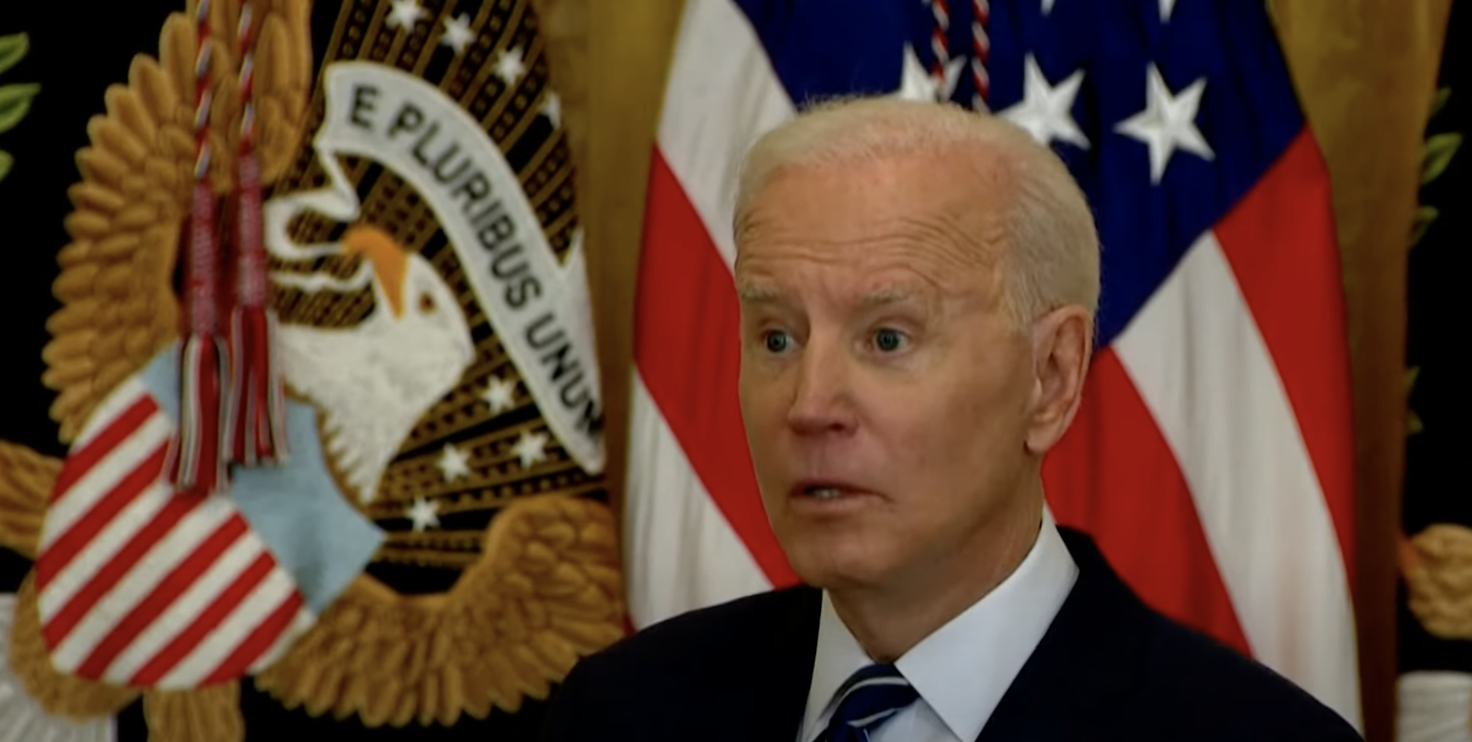 Everything about him sucks. He sucks as a messenger, his economic policies suck, he completely sucks as a truth-teller. He sucks in the integrity department.

And people suffering from the debilitating effects of old age can tell you that absolutely sucks. You are not the person you used to be, and you can’t do the things you used to do.

Joe Biden sucked before he became increasingly, cruelly incapacitated by the decline of his faculties. Thursday’s Potemkin sham of a press conference, in which pre-written questions and scripted answers replaced an honest dialogue with the American people over the state of our union, made that clear.

We shouldn’t have been forced to embrace Biden’s suck.

Biden’s family sucks for putting him, and us, through what’s going to obviously get much worse over time.

This man has the toughest job in the world, and it’s obvious he’s not up to the task. If you can’t answer questions off the cuff from an almost universally friendly press corps, it means you suck at the job.

We’ve had presidents who have sucked before. But not since Woodrow Wilson had a stroke in office and finished his second presidential term as an invalid, mostly comatose, with his wife running the country as a proxy president, have we had a situation sucking as badly as this one clearly will.

Is Joe Biden in charge? He doesn’t even know what he’s doing here. He says it all the time.

That sucks. And the world is watching.

For more than three decades now the Democrat Party has had as its chief project the covering up of just how badly it sucks.

If I had to guess I would say we’re being governed by a cabal of four, maybe five, people: Jill Biden, Kamala Harris, Nancy Pelosi, and Susan Rice. Rice is probably a proxy for Barack Obama, so you can toss him in as a Billy Preston to the Four Beatles of the American Apocalypse.

Or maybe the Spice Girls. Because these people are not the Beatles. The Beatles didn’t suck.

Pelosi especially sucks. How badly does she suck? She’s actively cheering on the insane Zoe Lofgren, who is the chair of the House Administration Committee, in her efforts to unseat a duly elected Republican, Mariannette Miller-Meeks, who won Iowa’s Second Congressional District seat by a razor-thin margin of six votes. Miller-Meeks was certified the winner of her race against Democrat Rita Hart by the state of Iowa, but Pelosi and Lofgren are trying to toss her out of Congress.

Even Pelosi’s own members, Democrats who suck so badly they can’t bring themselves to vote against their party when it’s obvious the things they’re being made to vote for will destroy them politically in districts where they had to lie and call themselves centrists in order to win, are now screaming about the suck they know they’ll have to embrace.

They can see it. Lofgren’s committee will recommend dumping Miller-Meeks, and Pelosi will whip them to vote for that recommendation. And the American people will not like it.

It’s one thing to practice irregularities nobody has ever inflicted on the American people in a presidential election — which even if you don’t believe rose to the level of stealing it you cannot deny was the case with the fiasco that was mail-in balloting and the further “innovation” of tech billionaires dumping hundreds of millions of dollars to convert public election offices in heavily Democrat areas into get-out-the-vote centers for the Biden campaign, as Mark Zuckerberg and his pals at the Center for Tech and Civic Life did.

That, by any standard of election integrity regular Americans would accept, sucked.

But it’s another thing entirely, a whole new level of suckage, to deny election to a woman who didn’t just claim she won in November, as Donald Trump did however rightfully, but had that claim ratified by the governing authority of the state that put on the election.

Go and accuse Trump of trying to overturn the election, and then literally overturn one in your own body.

What sucks worst about this is that it surprises exactly no one.

Biden’s press conference was watched all over the world. In the places that suck the most — like Beijing, Tehran, Moscow, Havana, Yangon (more properly known as Rangoon), and Pyongyang — the people in charge were popping corks on the finest champagne they could find. Because it confirmed what they already knew: America is leaderless, and the people in charge suck.

The Chinese already knew that. They knew it before the debacle in Anchorage earlier this month, and they definitely knew it afterward. At Anchorage, they harangued Secretary of State Anthony Blinken and National Security Adviser Jake Sullivan using the Democrat Party’s own anti-American rhetoric. Endlessly they flogged the critical race theory and Black Lives Matter narrative, throwing it back at the Biden regime to claim that America sucks.

Biden said he was “proud” of his people. You let the world’s leading oppressor of ethnic and religious minorities tongue-lash you with claims that America sucks, and you say you’re “proud” of that spectacle?

That’s hard to understand. Unless you understand something else, which is that for more than three decades now the Democrat Party, and the bipartisan swamp it has controlled basically since Ronald Reagan left office (a takeover that was turbocharged during the eight-year suck of the Obama–Biden administration), has had as its chief project the covering up of just how badly it sucks.

Can this be disputed? I think not.

Where is the Democrat Party based? Our large cities, which it controls so completely they might as well no longer be seen as emblematic of a democratic republic.

Pick one, doesn’t matter which, and several things will undoubtedly be true: its infrastructure, business climate, public safety, quality of life, affordability, culture, and governmental ethics have declined in recent years; there has been no Republican administration of that city for a long time and there is no foreseeable prospect of one ever again; the middle class has decamped for the suburbs en masse as a reaction to policies promulgated by the ruling Democrat machine in a knowing and purposeful campaign to rid themselves of those people and their fickle voting habits; the public schools are criminally, abysmally deficient despite breathtaking amounts of money spent on them; the Democrat machine is openly racist in whatever direction benefits it most politically; and all of the circumstances and symptoms of the manifest decline of the place are somehow blamed on white Republicans who don’t live there.

When they govern Washington, D.C., there’s nowhere to run. And everything begins to suck.

It sucked for eight solid years of the Obama–Biden administration. Everybody knew it. The Democrats blamed it on George W. Bush. They weren’t completely wrong in that. But Obama told America to embrace the suck. He said there was no magic wand to bring back economic prosperity, at the same time he told the world America sucks, then proved it by starting and prolonging wars around the planet that were neither in America’s interest nor the interests of the people affected by them.

And the Democrats’ auxiliary suck-meisters in the media made it their livelihoods to explain the suck. Obama was a great president, they said, and if you don’t agree you’re a racist.

For four years in the interregnum from the Obama–Biden suck-fest, Donald Trump told America it didn’t suck and that we had a right not to suck. And for a good chunk of those four years, we didn’t. Then came a Chinese virus and the needless and pointless loss of our liberties, livelihoods, and quality of life, most particularly in places Democrats govern, and everything sucked again.

Doubly so once Black Lives Matter and Antifa, the paramilitary wings of the Party That Sucks, got to work on our cities on the basis of lies — that our police are out hunting down black men to murder.

Forget about the fact that most of the police departments in the Minneapolises, Atlantas, Baton Rouges, Chicagos, and New Yorks are run by Democrats on behalf of Democrat mayors. If the BLM argument was true it was always Democrats chiefly to blame.

But when you’re covering up the fact that you suck, you have to be more and more ruthless about it.

Thursday’s press conference might well have been that point. This sucks. And it’s going to suck a lot worse going forward.