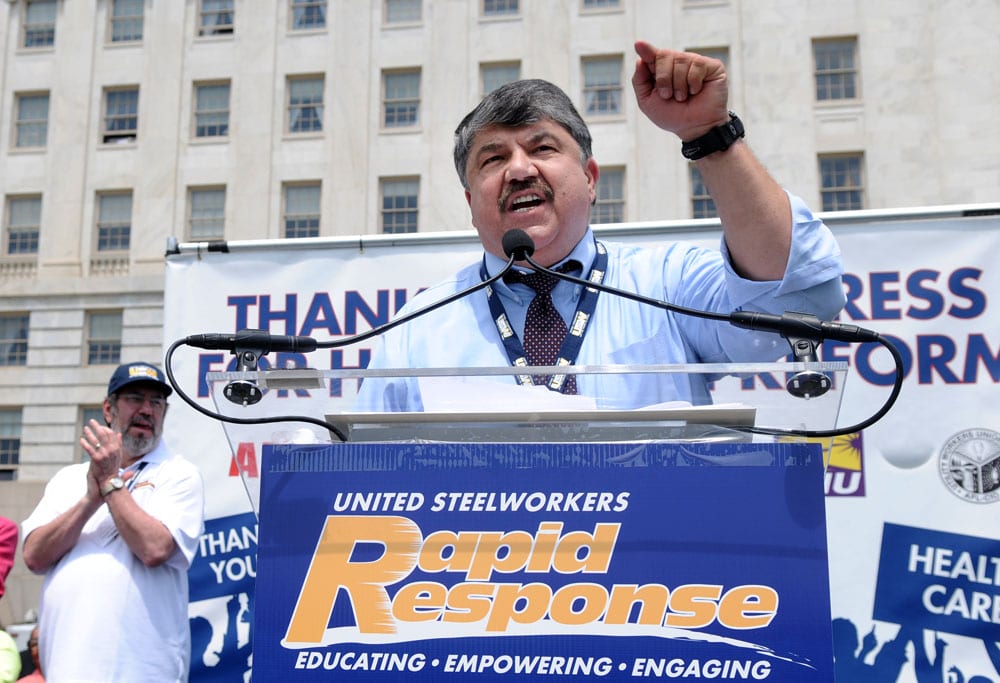 Last week’s Supreme Court ruling that now allows non-union public workers to opt out of paying union “fair-share” fees has Big Labor in a tizzy, but this commonsense free-speech decision has been long overdue.

AFL-CIO President Richard Trumka called the June 27 Janus v. AFSCME ruling “a political stain on what is intended to be the most honorable, independent body in the world” that will “empower the corporate elites in their efforts to thwart the aspiration of millions of working people.”

Perhaps Trumka is also concerned about the effect on his own compensation, which is more than $320,000 per year, now that AFSCME, AFL-CIO, and other members of Big Labor can no longer extort money from every public-sector worker.

In the 5-4 majority opinion, Justice Samuel Alito dubbed the previous status quo as “unconstitutional exactions [resulting in] billions of dollars… taken from nonmembers and transferred to public-sector unions in violation of the First Amendment.”

Unions collect these fees from workers for collective bargaining and other efforts they make on behalf of all public-sector employees in the workplace. About two dozen states previously required their workers to pay the fees.

The case springs from Mark Janus, a child support specialist at the Illinois Department of Healthcare and Family Services, who wasn’t pleased he was forced to pay dues of about $45 a month to the American Federation of State, County and Municipal Employees even though he wasn’t a member.

“It will not affect the collective bargaining,” Janus said at a news conference Wednesday morning. “Unions will have that continued right. It’s just that the worker now has the ability to make his own decision or her decision, and that’s why I brought this case. It’s up to the worker to decide what they want for themselves, not some other large entity.”

If anything, the SCOTUS ruling will give public-sector unions less ability to suck dry the coffers — and future coffers — of local and state governments. Perhaps the greatest financial crises this country faces are the billions upon billions of unfunded pension benefits promised to public-sector employees, pushed for by such unions.

In a 2016 column, Janus wrote that “government unions have pushed for government spending that made the state’s fiscal situation worse. How is that good for the people of the state? Or, for that matter, my fellow union members who face the threat of layoffs or their pension funds someday running dry?”

Some of these unions that have grown fat with forced-membership cash have been able to obtain unreasonably good concessions from state and local governments, with taxpayers on the hook for the costs.

Consider Illinois, where state union-affiliated workers must only pay for 8 percent of their health-care costs out-of-pocket. Illinois Policy found in a study that state taxpayers pay about $15,000 in annual health-care costs for state workers on a platinum-level plan. Union members who maintain their job for two decades will get insurance completely paid by state taxpayers after their retirement.

The American Economic Association reported in a 2012 study that workers in state government were earning 3-10 percent more than their peers in the private sector, and the gap in local government was 10-19 percent.

A 2015 study of various cases of member-only unions by the Century Foundation determined that many of them were able to achieve significant workplace gains even without the power of collective bargaining. A benefit to the approach was the need for more active involvement and democratic governance among the members.

“In order to remain in existence, a members-only union must keep the membership engaged, educated, and active,” the Century Foundation wrote. “The widespread use of these tactics would invariably make labor stronger, whether the members-only unions become majority unions or not.”

Fitch ratings analyst Laura Porter told Governing that teacher strikes across several right-to-work states this past spring indicate that weaker labor laws won’t necessarily halt labor movements. And that’s fine: a collection of workers, without the support of unions that grow large due to forced membership, should fairly be able to push for better wages and benefits.

That is their First Amendment right, after all.