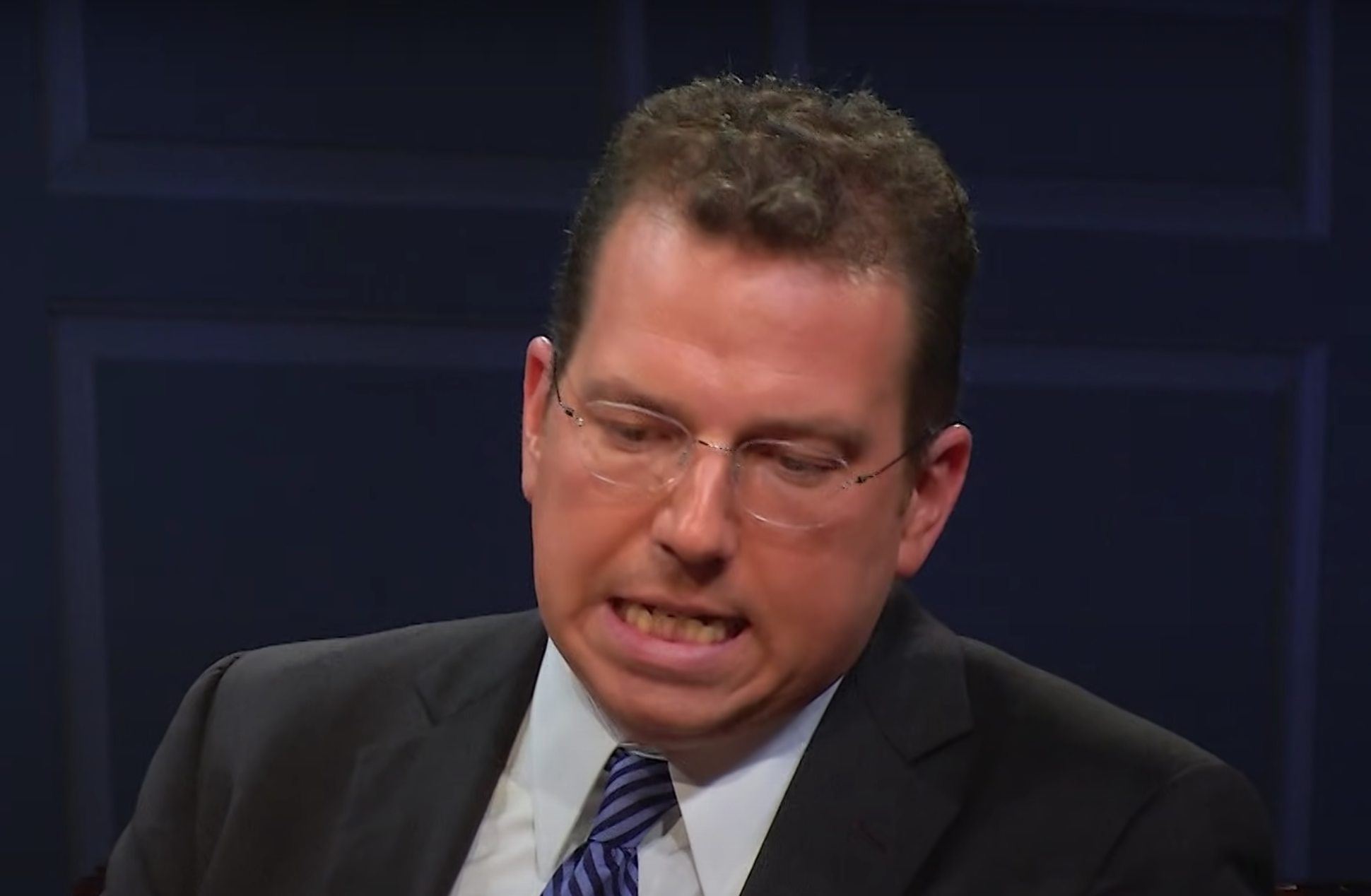 The one obvious clue that President Joe Biden did not attend an Ivy League University is this: When busted for plagiarism, Biden suffered real-world consequences. In a 1987 Democratic primary debate, while very much a viable candidate, Biden famously lifted a passage from a speech by Neil Kinnock, the former leader of Britain’s Labour Party, and tried to pass it off as his own.

The Michael Dukakis campaign caught the theft, and the media, still in their journalism phase, went digging for more purloined pearls of Biden wisdom. They were not hard to find. Under pressure, Biden had to confess that he had plagiarized a paper while in law school — the Syracuse University Law School, that is — and he was out of the presidential race even before the corn stalks withered in Iowa.

As Biden learned the hard way, a Syracuse University affiliation offers no immunity to the plagiarism bug. Harvard’s does. Yale’s does. And Princeton’s will likely do the same. But even the Ivy schools require the individual to boost his/her/their natural Ivy immunity with renewable doses of progressive toxins.

No Ivy Leaguer has done more to earn his immunity than “History’s Attack Dog,” Princeton University professor Kevin Kruse. In addition to his more prosaic tasks at Princeton, Kruse has assumed the responsibility of patrolling the daily news. “Online,” observes Emma Pettit in The Chronicle of Higher Education, “the historian specializes in serialized posts, called threads, that lend historical context to breaking news or skewer a version of history spouted by right-wing agitators.” It is the skewering that has netted Kruse his 502,000 followers on Twitter.

In May 2017, Kruse took particular pleasure in slicing and dicing former Milwaukee Sheriff David Clarke. Clarke set himself up for the kill by announcing his likely appointment as assistant secretary in the Department of Homeland Security under President Donald Trump. As a conservative and an African American, he made a tempting target for leftists eager to show Blacks the consequences of thinking for themselves.

Andrew Kaczynski of CNN’s KFile took the first stab at Clarke’s reputation, accusing him of having “plagiarized portions of his master’s thesis on homeland security.” This was a low blow. A police officer by profession, Clarke never pretended to be a scholar. In fact, he didn’t graduate from college until he was 43 and only then through a continuing education program. The mistakes he made on the thesis were amateurish, the sort one routinely sees on papers at this level. Still, compared to Dr. Jill Biden’s botch of a doctoral dissertation, Clarke’s thesis was downright Aristotelian.

Clarke tweeted back: “This @CNN hack @KFILE oppo research MO is to accuse plagiarism. I’m next. Did it to Rand Paul, Monica Crowley et al.” Clarke’s defiance only provoked the Left. Prowling the blogosphere for conservative prey, History’s Attack Dog moved in for the kill. Kruse tweeted of Clarke: “If he wants someone with more credentials to say it: I’m a professor. This is textbook plagiarism. We’d expel a student who pulled this.”

The question that conservative scholar Phillip Magness has been asking is whether “we,” presumably Princeton, would expel a professor who “pulled this.” In a June 14 article in Reason, Magness makes a compelling case that Kruse did consciously what Clarke did innocently. And then some. Kruse extracted several passages from a book by retired historian Ronald Bayor, tweaked them just a tad, and placed them uncited in his own Ph.D. dissertation from Cornell. What follows is one of many samples from Magness.

Bayor: “For many reasons, Atlanta appeared to be a good city to study for such an analysis. It had a singular place in the South as a transportation and business center; it is a leading New South and Sunbelt center; it was a headquarters city for a number of civil rights organizations and is a center of black higher education; and it has hailed itself as ‘a city too busy to hate’—one of progressive race relations.”

Kruse: “Atlanta struck me as a logical site for such an analysis. It holds a singular place as the political and economic leader of the New South; it served as a headquarters for a number of civil rights organizations; it has been a center of black higher education. Furthermore, Atlanta has hailed itself as the ‘city too busy to hate’—one of ‘progressive’ race relations.”

Following up, Magness asked Kruse to provide some explanation for what would appear to be “textbook plagiarism.” The attack dog whimpered in response that, yes, Magness had “found instances here in which I inartfully or incompletely paraphrased” the offending passages. In the four weeks since the Reason article appeared, the self-muzzled Kruse has posted only one innocuous tweet. His half-million Twitter groupies have to be disappointed. In the seven years prior, Kruse had been churning out more than 20 tweets a day on average.

Magness doubts that Princeton will give Kruse the boot. “In an age of declining academic rigor,” he writes, “certain works seem to get a pass—provided that they promote particular ideological narratives that enjoy a following among elite academics and journalists.” Recent history gives Magness all the evidence he needs to reinforce his pessimism.

If the Ivy League is to plagiarism what the SEC is to football, then Harvard is its Alabama, often the champ, always a contender. In 2002, while serving on the university’s governing board, Harvard Ph.D. Doris Kearns Goodwin got caught stealing at least 50 passages for her book on the Kennedys from Lynne McTaggart, author of a biography of Kathleen Kennedy. The plagiarism was so blatant it should have killed Goodwin’s career. But the Harvard connection, combined with her TV presence and her reliable liberal sycophancy, got her a wrist slap for the literary equivalent of a felony.

In the early part of this century, the legal duo of Charles Ogletree and Laurence Tribe teamed up in a bit of nonsense that would have embarrassed the average community college. In September 2004, law professor Ogletree was forced to admit that his book All Deliberate Speed contained an almost verbatim six-paragraph passage from What Brown v. Board of Education Should Have Said, a book by Yale Law School professor Jack Balkin. In his formal apology, Ogletree blamed two assistants for “inadvertently” deleting the attribution to Balkin. As the Black progressive mentor of the Democratic Party’s rising new rock star, Barack Obama, Ogletree could have shot the two assistants and kept his Harvard gig. In Cambridge, swiping another’s work and then lying about it was no big deal.

Professor Laurence Tribe was tight with Obama as well, but as a woke supernova, he had no need for outside help. Two years earlier, when the student editors at the Harvard Crimson attacked Goodwin, Tribe attacked the editors. That was his style. Before Ogletree confessed to his sins, Tribe overwhelmed Ogletree’s accusers with his star power.

So annoying was Tribe’s defense of Ogletree that an anonymous tipster alerted the Weekly Standard, then in its conservative phase, to the fact that Tribe had problems of his own. Apparently, he had lifted numerous passages from Henry J. Abraham’s 1974 book, Justices and Presidents, and inserted them in his 1985 book, God Save This Honorable Court. Weeks after Ogletree’s apology, Tribe had to go public with his own apology. Tribe said, “I have immediately written an apology to Professor Abraham, whom I—like so many others—hold in the highest regard.”

Compelled to review the two cases, then-Harvard Law School Dean Elena Kagan and then-Harvard President Larry Summers dithered for months before finally declaring the offenses of their legal luminaries “inadvertent.” At this level, “inadvertent” was no worthier an excuse for Tribe and Ogletree than it had been for Hillary Clinton’s use of a private email server. Nonetheless, it provided cover enough to allow the media to look the other way. (READ MORE from Jack Cashill: ‘Roots,’ ‘Dreams,’ and the Unequal Punishment of Fraud)

Of course, no discussion of Harvard is complete without reference to Harvard Ph.D. and serial plagiarist extraordinaire Fareed Zakaria. In 2009, the Atlantic’s Jeffrey Goldberg caught him lifting unattributed quotes from Goldberg’s interview with Benjamin Netanyahu. In 2012, Time and CNN suspended him for swiping material from a New Yorker column. In 2014, two bloggers dissected in delightful detail Zakaria’s lifelong pattern of pilfering the passages of others.

“Yet Zakaria’s high-flying career has barely wobbled,” wrote Andrew Beaujon approvingly in the Washingtonian. “He still hosts a show on CNN, still writes a column for the Washington Post, and last year published yet another conversation-starting book.” The Harvard part helps. The leftist politics are essential, but being a prominent Muslim is what saved — can I say this? — Zakaria’s bacon.

Speaking of which, busted Yale Law School professor Ian Ayres penned a bacon-saving Washington Post op-ed last year much more eye-popping than his pathetically routine offense. To quote the Yale Daily News, “Several passages in Yale Law School professor Ian Ayres … new book are unattributed verbatim reproductions or nearly identical paraphrases of passages from various newspaper and magazine articles published in the last twenty years.” Ho hum, another day, another Ivy scandal. But the opening credit of the op-ed may have assured Ayers lifetime immunity from plagiarism prosecution. It reads: “Ian Ayres is a professor and deputy dean at Yale Law School. Their preferred pronoun is ‘they.’” Now there is a clever human person!

An Ivy affiliation, however, does not buy a conservative immunity from anything. Like David Clarke, in 2017 Monica Crowley was denied the position she sought in the Trump administration on a plagiarism charge, once again unearthed by CNN truffle sniffer Andrew Kaczynski. Two years later, after an extensive investigation of her Ph.D. dissertation on American policy toward China, Columbia University cleared Crowley of “research misconduct.” The New York Times covered the news but nonetheless headlined its article “Columbia Inquiry Found Plagiarism in Monica Crowley’s Dissertation.” As the saying goes, a scandal is only a scandal if the New York Times calls it a “scandal” on its front page. To date, to no one’s surprise, the Times has yet to mention the Kruse incident at Princeton. Now, if it had been Ted Cruz …

Jack Cashill’s newest book, Dispossessed: The Untold Story of America’s Great Ethnic Diaspora, will be out in the not-too-distant future.