At Large,Top Story Israel,Israel–UAE Deal,Palestine,Palestinian Authority,UAE U.S. May Broker More Deals With Israel and Muslim States - The American Spectator | USA News and Politics
Menu
At Large
Trump Administration Poised to Broker More Deals Between Israel and Muslim States
UAE, Serbia, and Kosovo are among those on board — and more may join up soon.
by Steve Postal
Trump participates in a signing ceremony with Serbian President Aleksandar Vučić and Kosovo Prime Minister Avdullah Hoti Friday, Sept. 4, 2020, in the Oval Office of the White House (Joyce N. Boghosian/Official White House Photo) 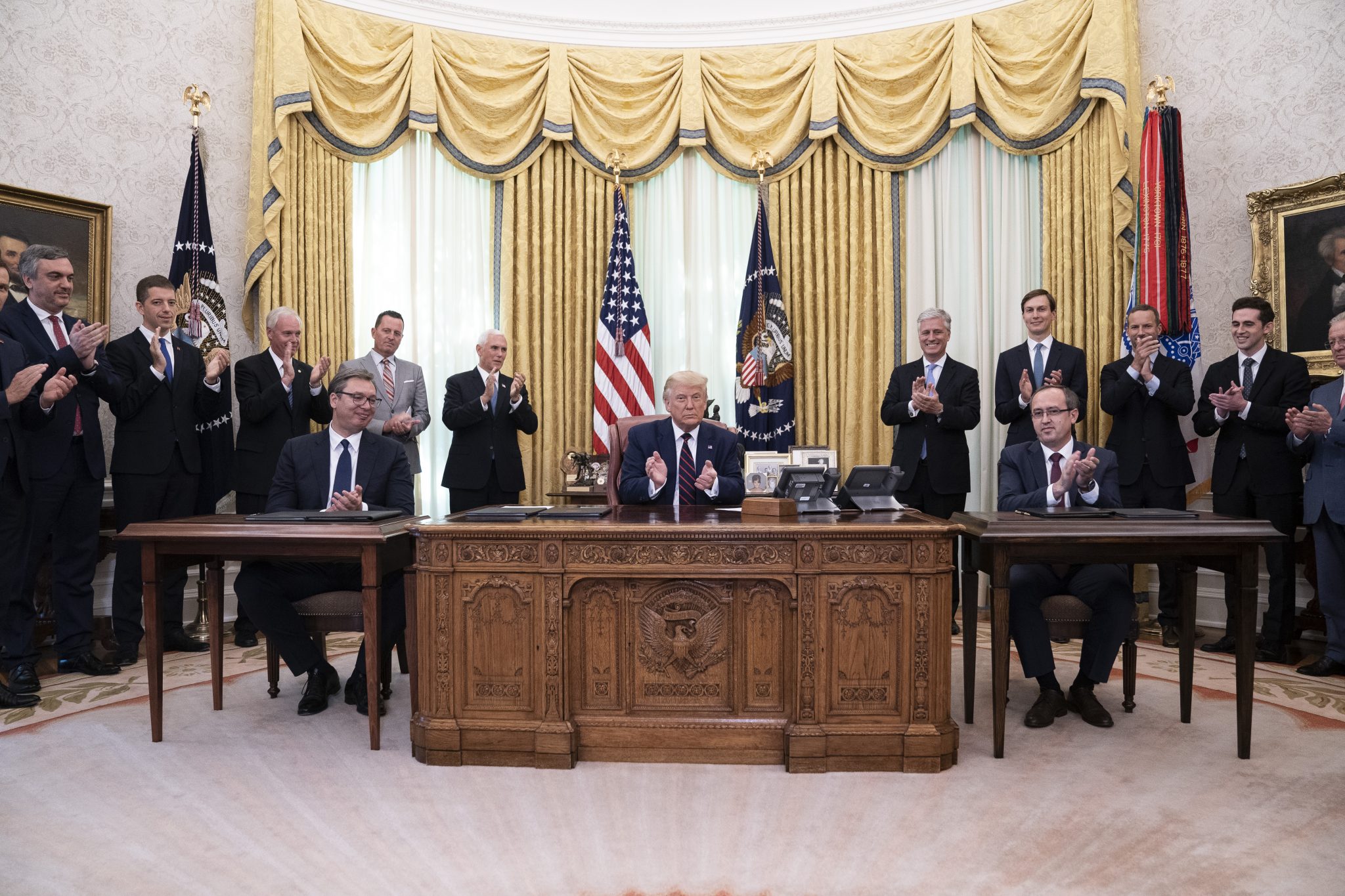 The Trump administration could be on the cusp of benefiting from a cascade of events surrounding the normalization of ties with Israel, following the initial announcement of the U.S.-brokered Abraham Accord between that country and UAE. That normalization has already matured significantly less than a month following the announcement of the Abraham Accord. Additionally, there have been some positive movements towards other countries normalizing ties with Israel following Secretary of State Mike Pompeo’s recent visits to that country, along with Sudan, Bahrain, UAE, and Oman, and Morocco via videoconference; and Jared Kushner’s visits to Israel, Bahrain, UAE, Saudi Arabia, Morocco, and Qatar.

El Al Israel Airlines made its first flight from Tel Aviv to Abu Dhabi on August 31, and Israir has negotiated flights from Tel Aviv to UAE. An Israeli real estate developer based in Dubai is assisting Emiratis and Israelis invest in each other’s real estate markets. Israeli PR firm ReBlonde is partnering with UAE’s White Water PR so that both firms can access their respective markets. An Israeli and an Emirati law firm have partnered to educate one another on their legal systems. Israeli firm Arieli Capital is in negotiations for agricultural projects in UAE, while UAE is planning to send people to Israel to learn about Israel’s agricultural technology. Israeli shoe store Scoop has signed a deal to open five stores in UAE. Israel’s lingerie company FIX recently finished a photo shoot featuring an Israeli model in modest pajamas in Dubai. Israel’s two largest banks, Hapoalim and Leumi, are currently negotiating banking and financing agreements with government and banking contacts in UAE. These negotiations include discussing joint ventures in solar energy and desalinization. Israel and UAE are also currently looking into cooperating in alternative energy, combating desertification, protecting maritime life, and artificial island creation. The UAE will also have the Orthodox Union (OU) provide kosher certification in the country.

Following the UAE deal, there have been several positive developments suggesting that the U.S. will continue to broker other normalization agreements with Israel.

Bahrain. According to an unnamed Israeli official, Bahrain will be the next to normalize relations with Israel, and is expected to do so this month after Israel and UAE’s peace treaty signing. Last week, Bahrain granted Israel the right to use its airspace. Last month, Mossad head Yossi Cohen spoke with Bahraini Prime Minister Khalifa bin Salman al-Khalifa, and some say that the conversation was about normalization. According to a recent Israel Intelligence Ministry report, Bahrain would be interested in normalizing relations with Israel, particularly to grow technology startups and acquire Israeli security technology.

Oman. An Israel–Oman normalization agreement may also be coming soon. Following the signing of the Abraham Accord, Israel Foreign Minister Gabi Ashkenazi spoke with Omani Minister Responsible for Foreign Affairs Yusuf bin Alawi bin Abdullah about strengthening ties between the two countries. According to the recent Israel Intelligence Ministry report mentioned above, Oman would be interested in Israeli counter-terrorism and security technology, as well as water, agriculture, cybersecurity, and communication technologies.

Saudi Arabia. There have been positive movements in the development of normalization talks between Israel and Saudi Arabia. But these are unlikely to bear fruit in the near term: King Salman just stated that Saudi Arabia would not recognize Israel without Israeli recognition of a Palestinian state, the king currently has reservations about normalization, and Saudi society (unlike Emirati society) is significantly anti-Israel. According to one source, if the Israelis and Saudis do establish a normalization agreement now, it will likely resemble the “cold peace” that Israel has with Jordan and Egypt.

That being said, Israel Hayom reported that there has been “significant progress” to normalize relations between the two countries. In his recent trip to Riyadh, Jared Kushner and Saudi officials had discussed the possibility of the U.S., Israel, and Saudi Arabia striking a tripartite accord similar to that reached between the U.S., Kosovo, and Serbia. Last week, Saudi Arabia granted Israel permanent overfly rights to and from UAE. A Saudi imam recently delivered a sermon that some say is a call for normalization with Israel.

Sudan. There are promising developments for normalization between Israel and Sudan, although Sudan is sending mixed messages. Back in February, Sudan agreed to begin talks for eventual normalization of ties with Israel, and also began permitting Israel to use its airspace. Early last month, Voice of America reported that Israel and Sudan were close to finalizing a normalization deal. One Sudanese official stated that Israel and Sudan have been negotiating normalization for months, and that it’s “a matter of time. We are finalizing everything.” In a meeting brokered by UAE, Yossi Cohen has met with Mohammed Hamdan Dagalo, the deputy head of Sudan’s ruling military council. Secretary of State Mike Pompeo flew on the first direct flight from Tel Aviv to Khartoum.

But prospects of normalization seemed to hit some setbacks when a spokesman for Sudan’s foreign ministry was fired a day after he publicly expressed support for normalization, and Sudan’s prime minister stated that the transitional government, in power until 2022, has no “mandate” to agree to normalization. On the other hand, Sudan’s foreign minister seemed to indicate that Secretary of State Mike Pompeo will discuss Sudan’s current negotiating position on normalization with Israel, suggesting that prospects of a final deal are still alive. Sudan’s foreign minister had also remarked that the U.S. has linked normalization with Israel with an aid package as well as Sudan’s removal from the U.S.’s blacklist of state sponsors of terrorism. The U.S. and Sudan reportedly remain far apart on the amount of an aid package, with Sudan wanting $9 billion, while Secretary of State Mike Pompeo has offered $50 million.

Morocco. Normalization between Israel and Morocco is also possible. While Moroccan Prime Minister Saad-Eddine El Othmani made a statement opposed to normalization of relations with Israel, he later appeared to walk that back, saying that he was speaking as the leader of the Islamist PJD party, not as prime minister of Morocco. Morocco is reportedly considering normalization in exchange for U.S. recognition of Moroccan sovereignty over the Western Sahara.

While the U.S. might be able to secure more diplomatic breakthroughs in the aftermath of the Abraham Accord, it is highly unlikely that the Palestinian Authority (PA) will change course, at least in the short term. Since my last report on PA rejection of the Abraham Accord last month in The American Spectator, the PA has only dug in further. Chief negotiator Saeb Erekat, who recently got a gig mentoring students at Harvard’s Kennedy School, called Arab support for Israel “a public birth for the Arab Zionists” that was “forbidden” and “Zionist thinking.” He also stated that the PA would cut ties with any country that establishes an embassy in Jerusalem. PA President Mahmoud Abbas called the Abraham Accords “a poisoned dagger,” and has met with the leaders of Hamas and Islamic Jihad to discuss a possible unity government with these groups. Such behavior has led U.S. National Security Adviser Robert O’Brien to criticize the PA for its “Marxist-Leninist revolutionary struggle mentality.” It looks like more and more Muslim countries will benefit from relations with Israel, while the PA will be left out due to its own intransigence.