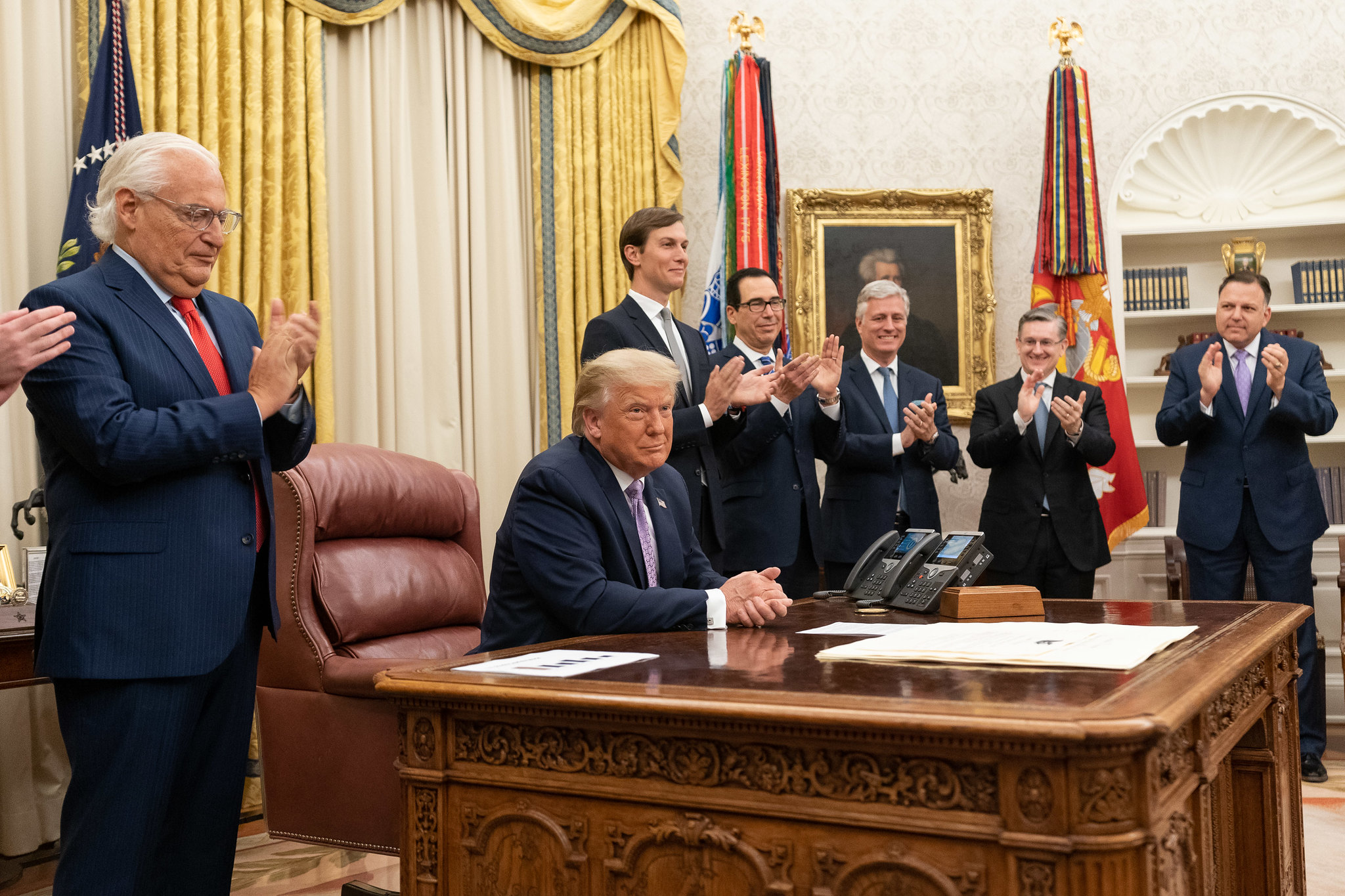 Last week, Israel and the United Arab Emirates (UAE) agreed to a establishing full diplomatic relations. Unlike Israel’s treaties with Egypt and Jordan, this deal stands to become far greater than a “cold peace” limited to defense ties. According to a joint statement, the two countries will soon sign agreements involving “investment, tourism, direct flights, security, telecommunications, technology, energy, healthcare, culture, the environment, the establishment of reciprocal embassies, and other areas of mutual benefit.”

Since the diplomatic announcement, companies from the two countries have signed an R&D deal for joint COVID-19 research and development, phone lines between the two countries have been established, and the foreign ministers have spoken with each other. Israeli pop star Omer Adam is in negotiations with Emirati royals to perform in the UAE, direct flights between the countries are being negotiated, and trade between the two countries is projected to be hundreds of millions of dollars annually. Israeli President Reuven Rivlin has invited crown prince Mohammed bin Zayed Al Nahyan to Jerusalem. The UAE has also agreed to take in Yemen’s remaining Jews, in the wake of disputed reports that they are being persecuted by Houthi rebels.

Some larger potential consequences of the Israel–UAE agreement are also worth exploring:

Other Countries May Follow, But Saudi Arabia Is the Real Prize

The UAE deal will no doubt influence other countries to follow suit. Bahrain and Oman will likely be next in establishing diplomatic relations with Israel, according to Israel Intelligence Minister Eli Cohen, with the former possibly occurring before the November U.S. presidential election. An Israel–Sudan deal may happen this year as well, according to Cohen. Morocco may also be in the mix, and with it American recognition of Moroccan sovereignty over Western Sahara. Shockingly, Lebanese president Michel Aoun even indicated that he would be open to peace with Israel.

Any or all of the above would be groundbreaking. But the real prize above all others will be Saudi Arabia. Just last week, Jared Kushner opined that a Israel–Saudi deal was “an inevitability.” Saudi Arabia is reportedly in talks with Israel for a role in the Wakf in administering the Muslim holy sites on the Temple Mount in Jerusalem to counter Turkish Islamist organizations’ growing influence there. Jordan will likely be a broker in an Israeli–Saudi deal, as Jordan is having buyer’s remorse for its 2019 decision to reorganize the Wakf to Turkey’s benefit.

More importantly, an Israeli–Saudi deal would force Saudi Arabia to come to terms with how it and Wahhabi Islam will view the Jewish state and Jews moving forward. There are some indications that Saudi media, controlled by the state, is becoming friendlier to Jews and Israel. Following the announcement of the UAE deal, a senior Saudi journalist praised it as a “breakthrough,” and associated it with the Egyptian and Jordanian peace deals. In June, on Al-Arabiya Network, the Former Saudi Minister of Justice and current Secretary General of the Muslim World League Sheikh Muhammad Issa spoke of a “brotherhood” between Muslims, Jews, and Christians. Saudi Arabian–owned TV channel MBC’s airing of Um Haroun (“Mother of Aaron”), a TV drama about Persian Gulf Jews set in the 1940s and 1950s, may be an attempt by Saudi Arabia to normalize Arab and Jewish cultural interaction, and perhaps even Saudi and Israeli ties. Though much work has yet to be done, treatment of Jews and Israel in Saudi textbooks appears to be improving slightly.

Will Failure to Bring Sovereignty Result in Netanyahu and Likud’s Downfall?

But ironically, Netanyahu’s great achievement of sealing a deal with the UAE might be the beginning of his and Likud’s downfall. To make that deal, Israel agreed to halt efforts to apply sovereignty to its heartland, Judea and Samaria (known by many as the “West Bank”). Fifty percent, and, according to one poll, over 60 percent of the Israeli electorate supports applying Israeli sovereignty to parts of Judea and Samaria. Despite Netanyahu’s frequent promises to the electorate that he will apply sovereignty, many on the right are no longer believing him. Two Likud ministers, Transportation Minister Miri Regev and Health Minister Yuli Edelstein, have openly criticized Netanyahu for not applying sovereignty.

So Israel might be prepared to let someone else take sovereignty to the finish line. That replacement might be found in MK Naftali Bennett and his Yamina party. Bennett has been more consistently and historically supportive of sovereignty than Netanyahu has, and Yamina is more ideologically grounded in the need for sovereignty than Likud is. To illustrate this point, while both Bennett and Netanyahu support the UAE deal, Netanyahu stated in an interview with an Emirati TV station that he prioritizes the deal over immediate sovereignty, while Bennett previously said that Netanyahu has “missed a once-in-a-century opportunity” to apply sovereignty. Bennett has been calling for Israel to establish sovereignty over Area C of Judea and Samaria since at least 2012, when under his leadership, Yamina’s predecessor party began to push Likud rightward. Bennett is now very popular, given his policies towards fighting COVID-19 despite being in the opposition and not being appointed by Netanyahu as the health minister. Bennett may try to seize on his rising popularity and the missed opportunity of sovereignty to his (and Yamina’s) political advantage.

Yamina’s star is rising, while Likud’s is falling. Two recent polls predicted that if a fourth election was held, Likud would get either 33 or 30 seats, below its current 36 seats, while Yamina would get 19 or 18, a surge from its current five seats. These polls indicate that Yamina would become either the second or third most popular party in Israel. Right now, Yamina is the eighth-largest party and sits in the opposition.

There are growing cracks in Netanyahu’s base, a surge in Yamina’s popularity, and growing discontent of how Netanyahu is handling the coronavirus and the economy. These factors could create a perfect storm that could bring Netanyahu out of office and Yamina into power as the premier (pun intended) right-wing party in Israel. Simply put, Yamina might find itself on the right side of the sovereignty, economic, and coronavirus debates and be able to translate this into an electoral victory.

The recent Israel–UAE agreement represents continued realignment of the Middle East. Egypt, Oman, Bahrain, and Azerbaijan supported the agreement, while Turkey, Iran, Hezbollah, Hamas, and the Palestinian Authority all opposed it. The Palestinian Authority actually stated it would recall its ambassador, Turkey threatened to cut off all ties, and Iran issued a veiled threat to the UAE. The deal is a significant achievement, and may bring one or two other countries to make peace with Israel this year. That said, if not accompanied by sovereignty in Judea and Samaria, the deal might be the beginning of the end for Netanyahu and Likud’s 11-year ruling streak.