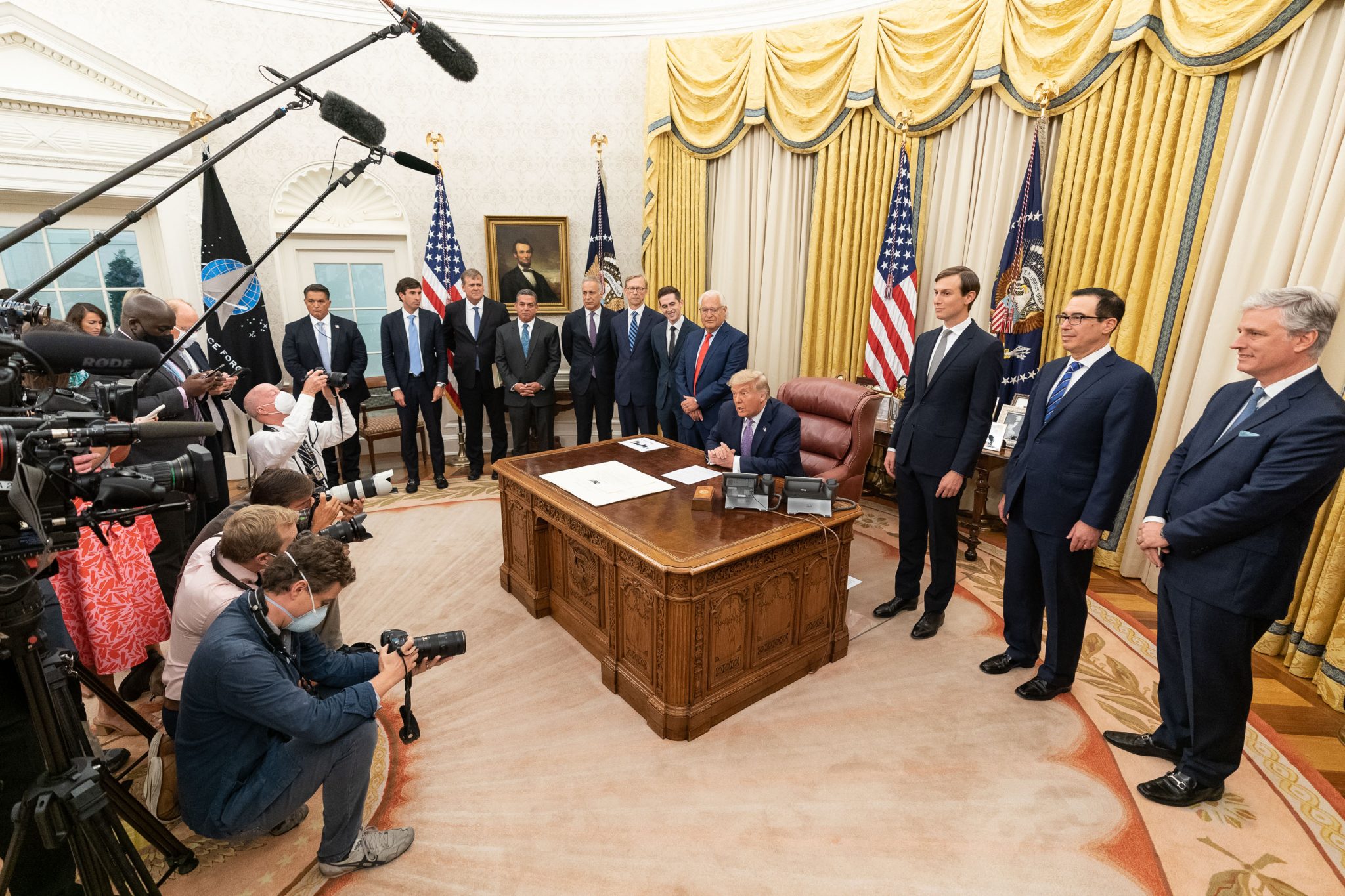 This week, Secretary of State Mike Pompeo is scheduled to visit Israel, the United Arab Emirates (UAE), Bahrain, Oman, Qatar, and Sudan, while Jared Kushner will visit Israel, Bahrain, Morocco, Oman, and Saudi Arabia. This is the latest in the Trump administration’s push to get more states in the Middle East to reconcile with Israel. These visits come on the heels of a growing divide within the Arab world’s response to the recently signed Abraham Accord between Israel and the UAE. On the one hand, media from the Gulf shows a growing reception to the efforts of the Trump administration, while on the other hand the Palestinian Authority (PA) continues to be hostile.

There are several examples of Gulf media showing positive or neutral coverage of the Trump administration’s role in the Israel–UAE deal. The Saudi Gazette published the UAE’s Ambassador to the U.S. Yousef Al Otaiba’s praise for the deal, where he thanked the “overwhelming support in the United States,” including from the “Trump White House and the Biden campaign” and “more than 140 members of Congress from both parties.” Kuwait’s Arab Times published an op-ed in which columnist Khalaf Al Habtoor stated, “I congratulate President Trump for making this happen.” The Kuwait Times reported that Israeli Prime Minister Benjamin Netanyahu halted his push to apply sovereignty to Judea and Samaria (known to many as the “West Bank”) “as part of his pledge to Trump,” showing approval of President Trump’s role in the deal. The Times of Oman referenced President Trump’s tweet that the deal was a “historic peace agreement.” The Arab Times also published a video interview between David Schenker, Assistant Secretary of the Bureau of Near Eastern Affairs in the U.S. Department of State, with Kuwaiti Reconnaissance Research Founder and CEO Abdulaziz Al-Anjeri, in which Schenker discussed the recent deal.

An editorial in UAE’s The National called the deal “a conventional legacy agreement delivered via an orthodox form of statecraft,” “diplomacy in its most traditional sense from a non-traditional president,” and that President Trump “is following a well-trodden historical path through seeking to bridge divides and negotiate peace.” The National also reported on two U.S. pledges to Iraq in August: Pompeo’s pledge that the U.S. would help the Iraqi government combat Shiite militias in Iraq, and President Trump’s pledge that U.S. troops would assist Iraq in the event “Iran should do anything” in Iraq.

PA Leadership and Media Continue to Be Hostile to Administration …

In contrast, PA leadership and media showed hostility to the Trump administration’s role in the Israel–UAE deal and related policies. Palestinian chief negotiator Saeb Erekat dismissed President Trump’s effort as a “desperate attempt” at achieving a foreign policy victory, while he stated that Jared Kushner had “a combination of arrogance and ignorance.” On Official PA TV News, Erekat also weighed in on Trump’s consideration of Congressman Doug Lamborn’s (R-Colo.) proposal to label the Palestinian Commission of Prisoners’ Affairs, and its director Qadri Abu Bakr, “sponsors of terror” for providing funds to terrorists. Erekat called Trump’s consideration “obscene bullying and blackmail” and amounted to “punishing the victim for rejecting the Trump-Netanyahu plan” (presumably, the “Trump-Netanyahu plan” is the White House’s Peace to Prosperity plan).

This rhetoric is not surprising, given earlier PA reactions to the Trump administration’s Peace to Prosperity plan. This month, the PA grand mufti reiterated a previously issued fatwa that he had previously mentioned in February and March forbidding anyone from cooperating with the Peace to Prosperity plan. Fatah, believed by many to be a secular party, openly directed a holy war on President Trump back in February on its Facebook page. That same month, Fatah’s Facebook page called on President Trump (in a play on words) to “shove [the deal] up your a**.” In May, Palestinian Authority President Mahmoud Abbas called “the America of [President Trump’s] administration” “colonialist.”

… And Incite Violence Against UAE Leadership

The Palestinian media, in further contrast to the Gulf’s press, was overwhelmingly critical of the Israel–UAE deal itself, with some criticism inciting violence. On Palestine TV, Abbas called the deal “an aggression on the Palestinian people.” Fatah’s Facebook page showed a political cartoon of a Palestinian terrorist sling-shotting a rock onto the heads of President Trump, Prime Minister Benjamin Netanyahu, and Sheikh Mohammad bin Zayed (MBZ), the crown prince of Abu Dhabi.

PA media and leadership apparently promotes incitement to assassinate MBZ, according to Palestinian Media Watch and Palestinian political science professor and peace activist Mohammed Dajani. For example, Fatah’s Facebook page called MBZ a “traitor,” while official PA TV news stated that protestors calling MBZ a “collaborator” “reflects the popular and official uniform Palestinian position.” Fatah also declared the deal “the agreement of treason” and that such a label applies to “the UAE leaders.” A senior PA religious figure also stated that the UAE deal amounted to “treason,” while the PA Grand Mufti issued a fatwa on official PA TV against Muslims coming from the UAE to pray on the Temple Mount. PLO Executive Committee member Azzam Al-Ahmad called UAE’s actions “a knife in the back of the Palestinian people,” while Erekat called the deal “a poison dagger” and, along with fellow Fatah member Jibril Rajoub, “a knife stab in the chest.” Similar rhetoric could be found among Palestinian protesters on the Temple Mount, who held up a banner calling the deal a “stab in the back” in addition to ripping up and burning images of MBZ. This rhetoric is significant and should be perceived as incitement to assassinate MBZ, given the assassinations of King Abdullah I of Jordan and President Anwar Sadat of Egypt, who also had sought peace with Israel.

In the wake of the Israel–UAE deal, there has been a growing rift between those who want normalization with Israel in the Gulf and those in the PA who reject such normalization. Some Gulf media even criticize the PA’s position. For example, an editorial in UAE’s Al-Imarat Al-Yawm criticized the Palestinian leadership for ignoring “all the support and assistance extended by the UAE.” A host on Kuwaiti TV slammed the “historic mistake by the Palestinian decision-makers” for rejecting the Israel–UAE deal. Given past PA intransigence, it looks like the rift between Gulf and PA Arabs will only grow, leaving Arabs in the PA only further away from the benefits of peace.