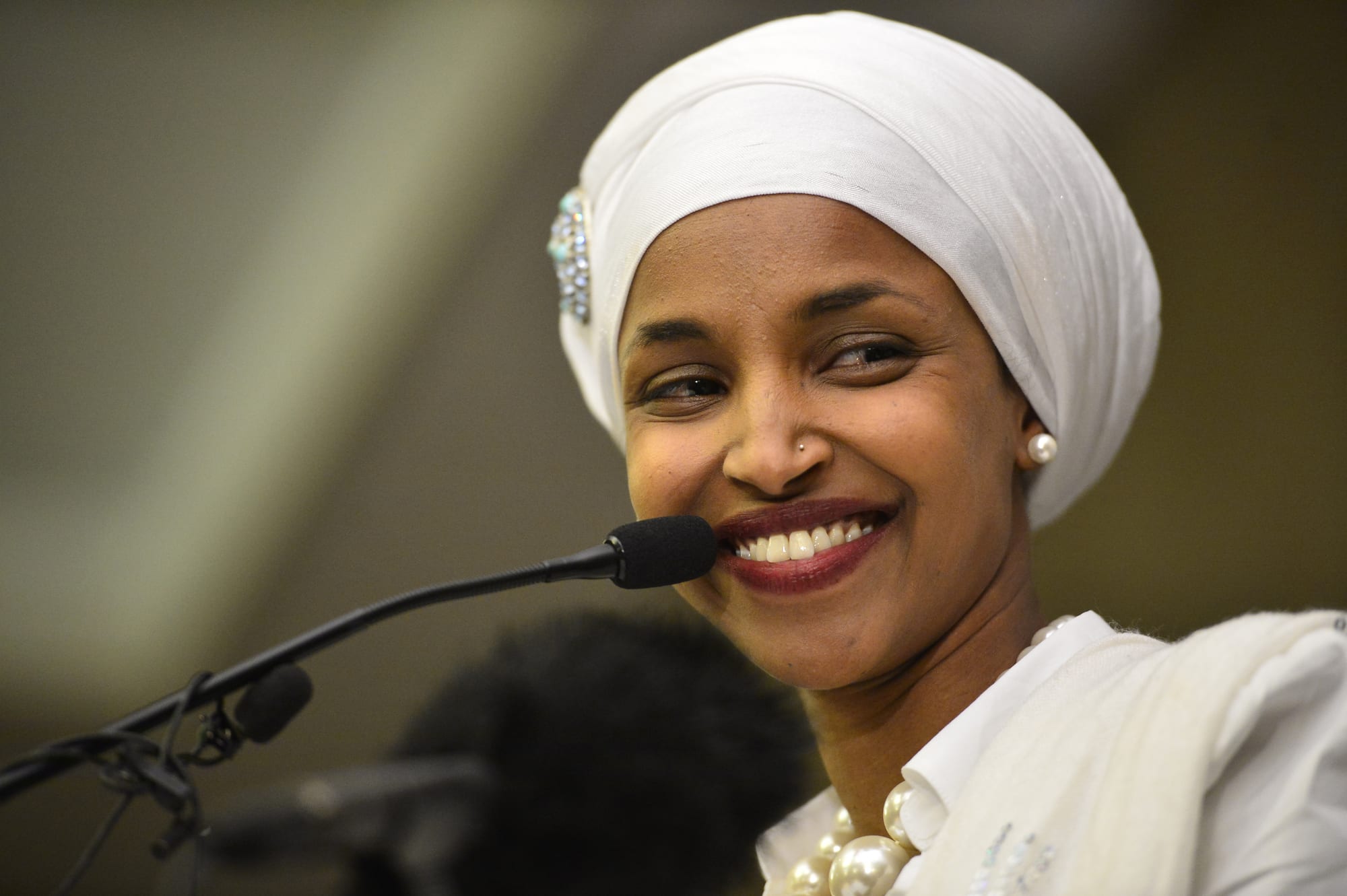 As if that weren’t enough, Omar joined the anti-free-press Left (but I repeat myself) with a demand that Tucker be taken off the air. Said she:

Advertisers should not be underwriting hate speech.

Actually, it is Omar and her progressive colleagues, such as Michigan’s Rashida Tlaib and Massachusetts’ Ayanna Pressley, of what they call “The Squad”— not Fox News or Tucker Carlson — who are out there routinely spewing the garbage of racial supremacy and hate. And they do it regularly, building their political careers on a toxic mix of racism and anti-Semitism.

Let’s start with the bogus allegations of racism against Tucker. As noted in this space last week, AOC and Omar are leaders of what I call the re-segregation Democrats. They are determined followers of the racism of identity politics, the latter the son of segregation and grandson of slavery. The two freshman members of Congress — and others — are determined to restore the idea of dividing and judging their fellow Americans by race. As also mentioned previously, the re-segregationists are the political heirs to this sentiment, notoriously expressed by another progressive Democrat in 1963:

That was, of course, then-Alabama Governor George Wallace, who made an entire career of dividing and judging Americans by race. Just as Omar and  Ocasio-Cortez are doing this minute. In fact, what Omar and AOC have done is merely slip an “re” in front of “segregation” and the sentiment and meaning behind the words is identical.

Here is Wallace — sorry, I mean Omar — just the other day, ranting about “brown and black people.” Here she is via YouTube saying that “This is not going to be the country of white people.”

Hello? Dividing by “white people” or “brown and black people” in America, Congresswoman, is decidedly un-American. It is 110 percent racist. But rest assured, your pandering by race has a very long history in your party, and you have picked up on it quickly.

Here is AOC tweeting that “The GOP doesn’t care about babies at all — especially brown, black, or poor ones.” Notice there is no irony there about all those aborted black babies. As noted here, blacks are 12 percent of the population — but 28 percent of  abortions target black babies. Not a peep from Omar, AOC, or the other re-segs. Apparently Black Lives don’t Matter.

George Wallace would have loved it.

Here, as well, is AOC suggesting that her own party leader, House Speaker Nancy Pelosi, is racist, saying the Speaker has made a point of “the explicit singling out of newly elected women of color.” Actually, it appears the progressive Pelosi is simply trying to accomplish that oldest of congressional traditions — reining in freshman members who get ahead of their political skis. Amazingly, according to The Hill, Missouri House Democrat and Congressional Black Caucus member William Clay angrily took on AOC for playing the race card, saying this:

What a weak argument, because you can’t get your way and because you’re getting pushback you resort to using the race card? Unbelievable. That’s unbelievable to me,” Clay said. “I could care less. I could really care less. I agree with the Speaker. Four people, four votes out of 240 people, who cares. …

It shows you how weak their argument is when they have to resort and direct racist accusations toward Speaker Pelosi … It’s very disappointing to me.

The irony here is that Pelosi has not hesitated to play the race card herself when discussing the question of counting citizens for the census, recently saying this of Trump supporters and those famous Trump “Make America Great Again” red hats:

You know his hat? “Make America white again.” They want to make sure that people, certain people, are counted. It’s really disgraceful, and it’s not what our founders had in mind.

Ocasio-Cortez’s chief of staff, Saikat Chakrabarti, made a point of tweeting out his own racist beliefs:

Instead of “fiscally conservative but socially liberal” let’s call the New Democrats and the Blue Dog Caucus the “New Southern Democrats.” They certainly seem hell-bent to do to black and brown people today what the old Southern Democrats did in the 40s.

Talk about a lack of self-awareness. His own boss is following exactly in the very long Democrat tradition of marrying racism to progressivism that provided those Southern and decidedly progressive Democrats with political power. Woodrow Wilson, Theodore Bilbo, Hugo Black, Carter Glass, and oh so many more Democratic progressives over the decades? Call your office — your acolytes have arrived.

The CBC’s Rep. Clay also took on Chakrabarti, calling him “juvenile” and “ignorant.”

There can be no mystery why Ilhan Omar and Ocasio-Cortez and the re-segregationists so easily peddle their racist bunk and pure racial hatred.

The hard fact is that the Democratic Party to which they belong was built from the get-go on a culture of using race to win elections — and nothing has changed in the 219 years of its existence. It is exactly that culture that has Pelosi reflexively saying the Trump slogan is “make America white again.” It is exactly that culture that has AOC’s and Omar’s colleague Rep. Rashida Tlaib demanding to be recognized not for, as Martin Luther King would say, “the content of her character” but rather for her skin color.

Pelosi herself was not immune to the charge from Tlaib that she was all about making the House Democrats a bastion of white supremacy. There was this Mediaite headline from an ABC interview with Tlaib: “Rashida Tlaib Guts Pelosi, Suggests Speaker Standing ‘Idly By’ as ‘Brown and Dark-Skinned Children’ Are ‘Dehumanized.’ ”

This was a mere sample of similar headlines elsewhere, with reporting across the board of Tlaib playing the re-segregationist race card. Over at Fox News, there was this Tlaib quote criticizing the Speaker for targeting Tlaib and her “squad” of House progressives instead of Senate Majority Leader Mitch McConnell. Said Tlaib:

“Focus on him, uplift the women, especially the women of color within your caucus that are out there,” Tlaib said Sunday on ABC News’ This Week, adding, “It is very disappointing that the speaker would ever try to diminish our voices in so many ways.”

Not to be outdone when it comes to playing the race card, there was this from presidential candidate Beto O’Rourke:

This country was founded on white supremacy. Every single institution and structure that we have in this country still reflects the legacy of slavery and segregation and Jim Crow and suppression even in our democracy.

Note well Beto O’Rourke’s rewriting of American history. Somehow there was slavery in the new United States of America, and somehow there was segregation. There was mysteriously no mention that it was Beto’s own Democrats who built an entire political party on slavery, and when slavery was defeated continued to build their party on race by centering it around segregation. And most assuredly Beto will never in a thousand years summon the courage to attack the racism of identity politics. Why? Because this is the political culture of his party — and always has been. They are the Party of Race.

It is no accident that in his bestselling book Ship of Fools: How a Selfish Ruling Class is Bringing America to the Brink of Revolution, Tucker says that it is critical for America “to de-emphasize  racial differences” because “in a society composed of many different ethnic groups, tribalism is the greatest threat to unity and order.”

Exactly. Or, put another way, long before AOC and Omar were around to repackage the ancient racism of the Party of Race, Dr. Martin Luther King was expressing his own view of what Tucker would years later be talking about. King’s words, famously, were these:

The other seriously serious problem with the racist Omar attack on Tucker Carlson is the demand from Omar, a sitting member of Congress, that pressure be used to take him off the air — precisely because Tucker has the nerve to take on Omar’s open racism and anti-Semitism.

Worse still — yet again — is the silence from CNN, The New York Times, the Washington Post, and others in the Leftist State Media about the attempts of a government official to silence a critic in the media. Not to mention in particular trying to silence Tucker Carlson, who has been fearless in taking the racism of the re-segregationists head on. When the Leftist State Media refuses to call out those on the extreme left for their much exhibited racism and/or anti-Semitism — a problem I have myself personally encountered at CNN, as I describe in my own book Swamp Wars: Donald Trump and the New American Populism — but instead fall silent when these same people threaten a free press, sooner or later they are setting themselves up for attempts to shut down their own hosts, networks, or newspapers. And oh yes: Where is the White House Correspondents’ Association — they who make much of supporting the First Amendment — when it comes to defending Tucker and taking on Rep. Omar? Silent — and not for the first time.

Make no mistake. There are two serious problems with the recent attacks on Tucker Carlson by Ilhan Omar.

First is the blatant racist attempt to re-segregate America and the attack on Tucker for opposing that racist re-segregation movement.

Second is the related attempt to silence anyone — especially on Fox News — who not only objects to this racism but fearlessly calls out the re-segregationists.

At bottom, the Ilhan Omar attack on Tucker Carlson is the age-old totalitarian urge to silence dissent. And worse.

Breaking news for Omar? It isn’t going to happen as long as the American people stand up and fight back.