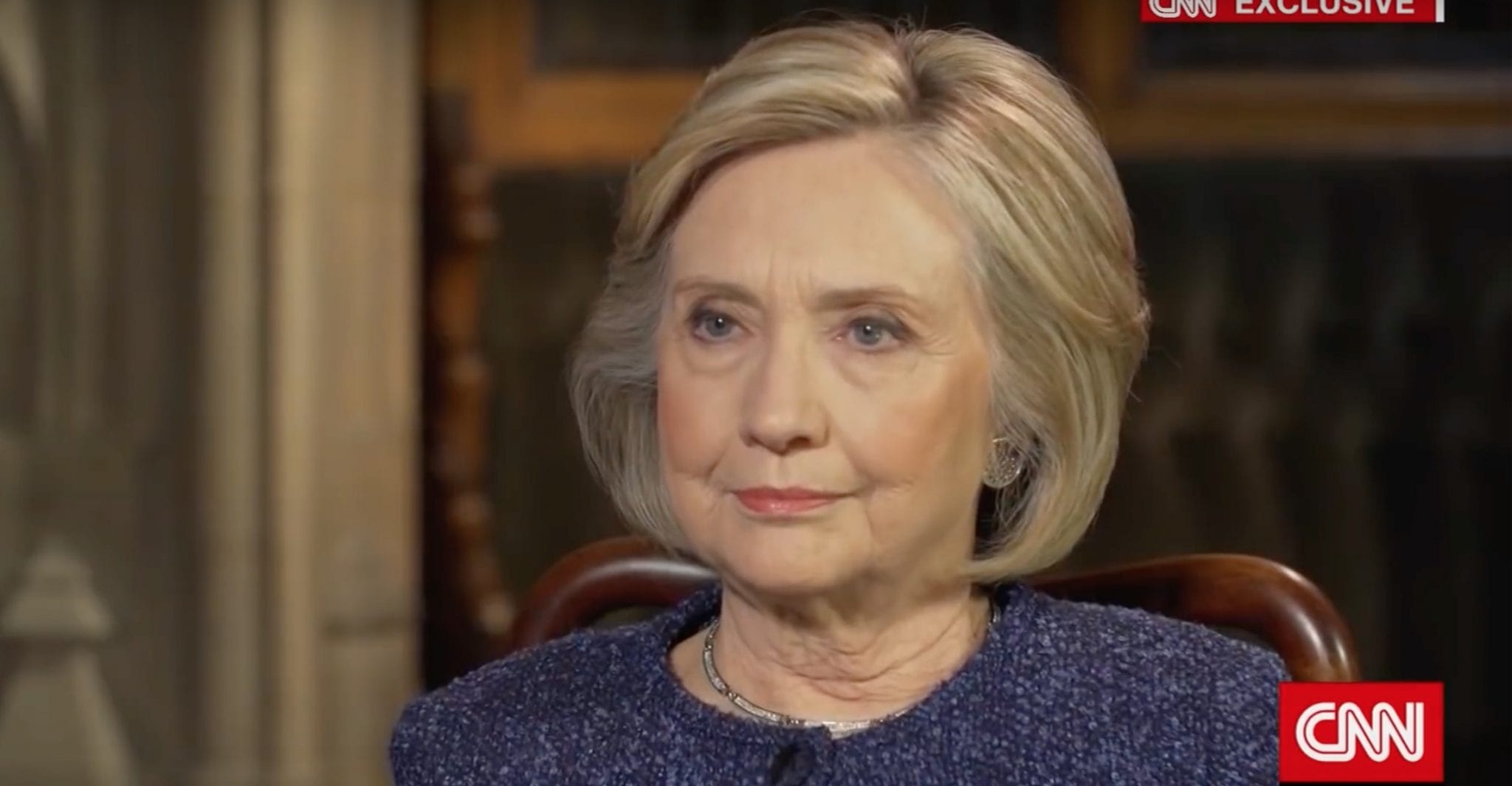 Many Americans have been wondering when the Democrats are finally going to calm down and accept the will of the voters as expressed in the 2016 election. Hillary Clinton provided the answer Tuesday afternoon — never. She clearly believes that Republican control of Congress or the Presidency is, by definition, illegitimate and must be resisted by any means necessary. During an interview with CNN’s Christiane Amanpour she said, “[Y]ou cannot be civil with a political party that wants to destroy what you stand for.” She went on to say that “civility can start again” when the Democrats regain control of the government.

She declared, in other words, that the peaceful transfer of power which has long been the hallmark of our system of government now applies only when her side wins and that she won’t stop stoking unrest until the “deplorables” learn their place: “But until then,” she said, “the only thing that the Republicans seem to recognize and respect is strength.” By “strength” she means “violence,” as experienced by Republicans Steve Scalise and Rand Paul. The last time leading Democrats utilized such irresponsible language was in 1860, when their refusal to accept the result of an election caused a war that got 600,000 Americans killed.

If this analogy seems over the top, consider that she has been employing this kind of rhetoric for nearly two years and has worked her minions into such a demented state that the Senate had to be converted into an armed camp last week to guarantee the safety of Republicans carrying out what should have been a dignified and sedate process — the confirmation of a Supreme Court justice. And remember that it was on the floor of this very chamber, “the world’s greatest deliberative body,” that pro-slavery Democrat Preston Brooks attacked Republican Senator Charles Sumner with a cane and very nearly killed him on May 22, 1856:

Brooks slammed his metal-topped cane onto the unsuspecting Sumner’s head. As Brooks struck again and again, Sumner rose and lurched blindly about the chamber, futilely attempting to protect himself.… Sumner was carried away.  Brooks walked calmly out of the chamber without being detained by the stunned onlookers.

Like the passive onlookers to the attack on Senator Sumner, Clinton’s fellow Democrats have been silent concerning her thinly veiled incitement of violence. Only one of the self-styled moderate Democrats, Senator Heidi Heitkamp of North Dakota, found Clinton’s remarks worthy of comment, much less condemnation. And, make no mistake about it, their silence equals consent. By refusing to call out this power-hungry harridan for deliberately casting doubt on the legitimacy of the democratic process and encouraging violence, these cowards render themselves complicit in the inevitable bloodshed. As GOP Senator Bill Cassidy put it:

At a time when Republicans are being shot, stabbed, doxxed, beaten, mailed powder, run out of restaurants, and sent death threats, Hillary Clinton urges Democrats to be even more uncivil. What an irresponsible statement. Every Democrat should denounce.

Predictably, the legacy “news” media has failed to call Clinton out for her comments. These are the very people who have long insisted, with precisely zero evidence, that President Trump and his supporters are somehow responsible for racist violence. Yet they have studiously ignored the dangerous implications of Clinton’s rhetoric. During the interview, Amanpour responded to her incendiary remarks as if she were talking about the weather. And, as Stephen Miller points out, the media have engaged in their usual hypocrisy by condemning the routine Trump rally chant, “Lock her up,” while disregarding Her Majesty’s incitement to violence:

I’m noticing a strange trend of pundits who ignored Hillary’s civility comments on CNN while condemning a dumb cathartic chant at Trump’s rally. If the gloves are off like she says, then the gloves are off.… She justified assaults on Senators on their front lawns and a mass assassination attempt on a baseball field. You don’t get to wag a finger at a rally crowd anymore while ignoring that.

But they will, of course, do exactly that. Amanpour works across the pond as CNN’s Chief International Correspondent, and was only able to interview Clinton because the latter was visiting Oxford University to celebrate the 70th anniversary of the universal declaration of human rights. Evidently, the irony of this was lost on both of these characters. Clinton’s ostensible concern for human rights is not exactly consistent with her description of half the U.S. voters as “a basket of deplorables.” And speaking of unintentional irony, Clinton advises us that she is worried about Americans casting a jaundiced eye on our institutions:

That’s pretty rich coming from a woman who has spent nearly two years telling her supporters that Trump is not a legitimate President, who recently wrote in the Atlantic, “I passionately believe it’s time to abolish the Electoral College,” and who has characterized the voters who didn’t support her in 2016 as backward. These ejaculations don’t exactly bolster the public’s opinion of our institutions, particularly when combined with her claim that “civility can start again” only when she and her party are back in power. Does that mean the kind of “civility” they afforded Brett Kavanaugh? As Mitch McConnell asked:

No peace until they get their way? More of these unhinged tactics? Apparently, this is the left’s rallying cry. But fortunately, the American people know that the fact-free politics of hate, fear and intimidation are not how we actually govern in our democratic republic.

But that’s exactly how our nation will be governed if Hillary Clinton and her utterly corrupt party ever get their hands on the levers of federal power again. She encourages violence against the “deplorable” and “backward” people who couldn’t bring themselves to trust her in 2016. What can we expect if she ever acquires the power to impose her warped worldview on the nation? Hillary Clinton is, to put it bluntly, an unstable and dangerous individual who can’t be trusted with power — ever.