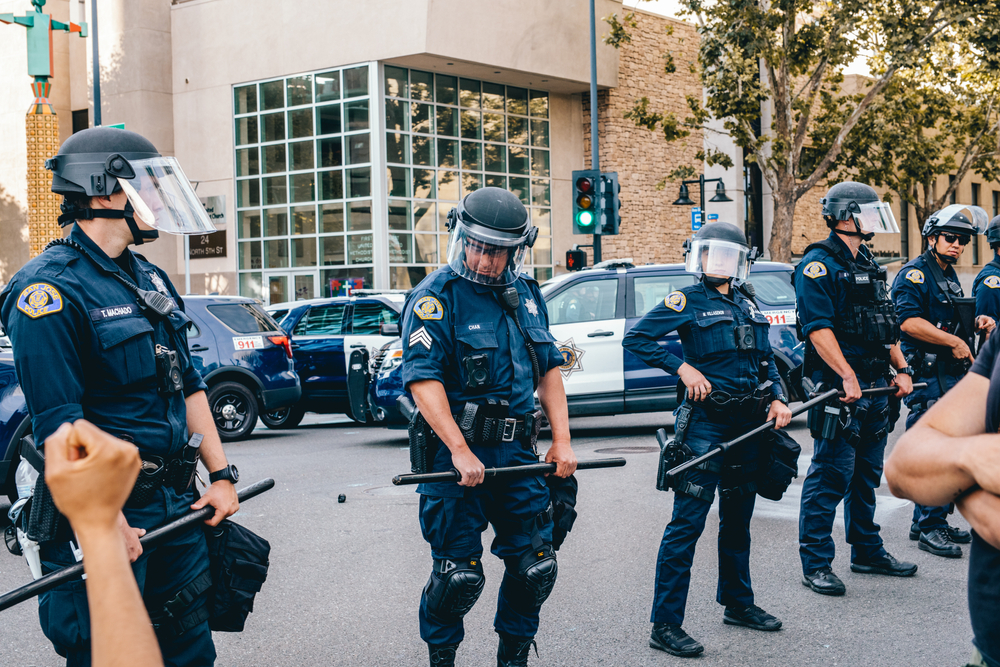 Sacramento — In the rural area where I live, those black flags with the thin-blue-line stripe have supplanted the stars and stripes as the chosen expression of patriotism. I refer to them as the “please tread on me,” or “I submit to authority” flags given that they celebrate armed officers of the state – rather than the freedom and independence that are supposed to be the hallmark of flag-waving Americans.

We now see similar black flags with a red stripe (for firefighters), which has left me wondering what color stripe Caltrans workers (maybe orange?) or environmental regulators (green already is taken to signify the military) will use to desecrate Old Glory. I’m not a flag purist who gets worked up about violations of the U.S. flag code, but there’s nothing wrong with the existing red, white and blue.

It may be easy to understand the resurgence of the thin-blue line flag, but this latest trend isn’t healthy. It’s an eff-you to supporters of far-reaching police reform in the wake of national police protests. But just because some progressives think all police are oppressors doesn’t mean that conservatives ought to view them all as heroes.

I’ve been covering police issues in California for decades and have found that policing is similar to most other government professions. Obviously, we need police to patrol our streets, but the people who work in policing run the gamut from people who do actual heroic things to scofflaws with a badge. Conservatives ought to be smart enough to make necessary distinctions.

Before policing became one of those dividing-line cultural issues, a broad consensus had been growing about the need to reform these bureaucratic departments. The conservative Right on Crime group, for instance, sensibly has argued that, “public safety policies, as any government service, should be evaluated on whether they produce the best possible results at the lowest possible cost.”

Likewise, the group espouses the common-sense principle that the nation needs a “prison system that incapacitates dangerous offenders and career criminals but which is not used in such a way that makes nonviolent, low-risk offenders a greater risk to the public upon release than before they entered.” Its signatories include such, er, radical personas as Rick Perry, Newt Gingrich and Grover Norquist.

From what I’ve seen, the police unions and their legislative allies (who mostly have been Democrats in California) created a system that puts the public and taxpayers last. They’ve passed laws that shield abusive cops, squelch the release of legitimate public records, misspend tax money in ways that do not improve public safety, and use their clout to bully local officials into doing their bidding.

I’ve often compared our policing system to the public-school system. We all appreciate the tough and necessary jobs that police officers perform, just as we appreciate the work that teachers do in the classroom. Yet all these union protections – from the Peace Officers’ Bill of Rights to local collective-bargaining agreements – make it as difficult to fire a misbehaving officer (and there are plenty of them) as it is to fire an incompetent teacher. The police unions resist reasonable policing reforms as zealously as the teachers’ unions resist educational reforms.

“These (union) contracts typically give officers the names of witnesses against them, including fellow officers,” the conservative California Policy Center explained. “That virtually assures that no fellow officers will ever testify against one another – the ramifications for ‘ratting out’ other officers would be severe. That’s how unions create a culture of protection – one that often includes ‘blue amnesia’ as officers conveniently forget what transpired during a troubling police encounter.”

When reformers propose reasonable ideas to hold accountable the small number of problem officers – and federal data suggest that a tiny proportion of overly aggressive officers is the cause of the vast majority of abuses and settlements – the unions accuse them of being cop haters. It’s like when teachers’ unions accuse school reformers of being foes of education. We shouldn’t fall into that trap.

In California, Democrats have long been the source of the problem given their close alliance with public-sector unions of all types. That has resulted in deep fiscal problems, as police budgets are crowding out other local public services largely because of the huge resulting pension liabilities. Check out police compensation in our state – it will blow your mind.

But union political power also takes its toll on police accountability. In the last five years, the state Legislature finally has rolled back some of the state’s secrecy provisions. California – despite all its progressive pretensions – has been particularly regressive. We’re one of only four states (all Democratic) that doesn’t have a process of decertifying officers, thereby letting fired cops go from one department to another.

After the Legislature finally passed Senate Bill 1421 to open some peace-officer disciplinary records, the public learned harrowing stories about police misbehavior. Check out this Mercury News series on officers who “are convicted criminals” with eye-opening rap sheets.

Thanks to changing national political dynamics, the state’s Democrats finally are bucking the police unions and passing many reasonable (and some not-so reasonable) accountability laws. For instance, Gov. Gavin Newsom currently has on his desk Senate Bill 2, which would finally create a state police-decertification process.

Conservatives should be applauding (or leading) such efforts, given their fundamental belief about the importance of governmental accountability and reform. There are plenty of areas of common ground – on everything from reforming federal asset-forfeiture laws to creating local response teams to dispatch social workers rather than officers to handle homeless-related disturbances.

At the very least, conservatives ought to be constructively engaged in the issue rather than taking their current approach – one that figuratively flies the blue-striped flag rather than realizing that many of the reforms echo the ideas (e.g., about the role of unions) they’ve long been touting.

Steven Greenhut
Follow Their Stories:
View More
Steven Greenhut is a senior fellow and Western region director for the R Street Institute. Write to him at sgreenhut@rstreet.org. His political views are his own.
Most Popular
1
Hither and Yon
POTATUS Speaks, A Nation Groans
by Scott McKay