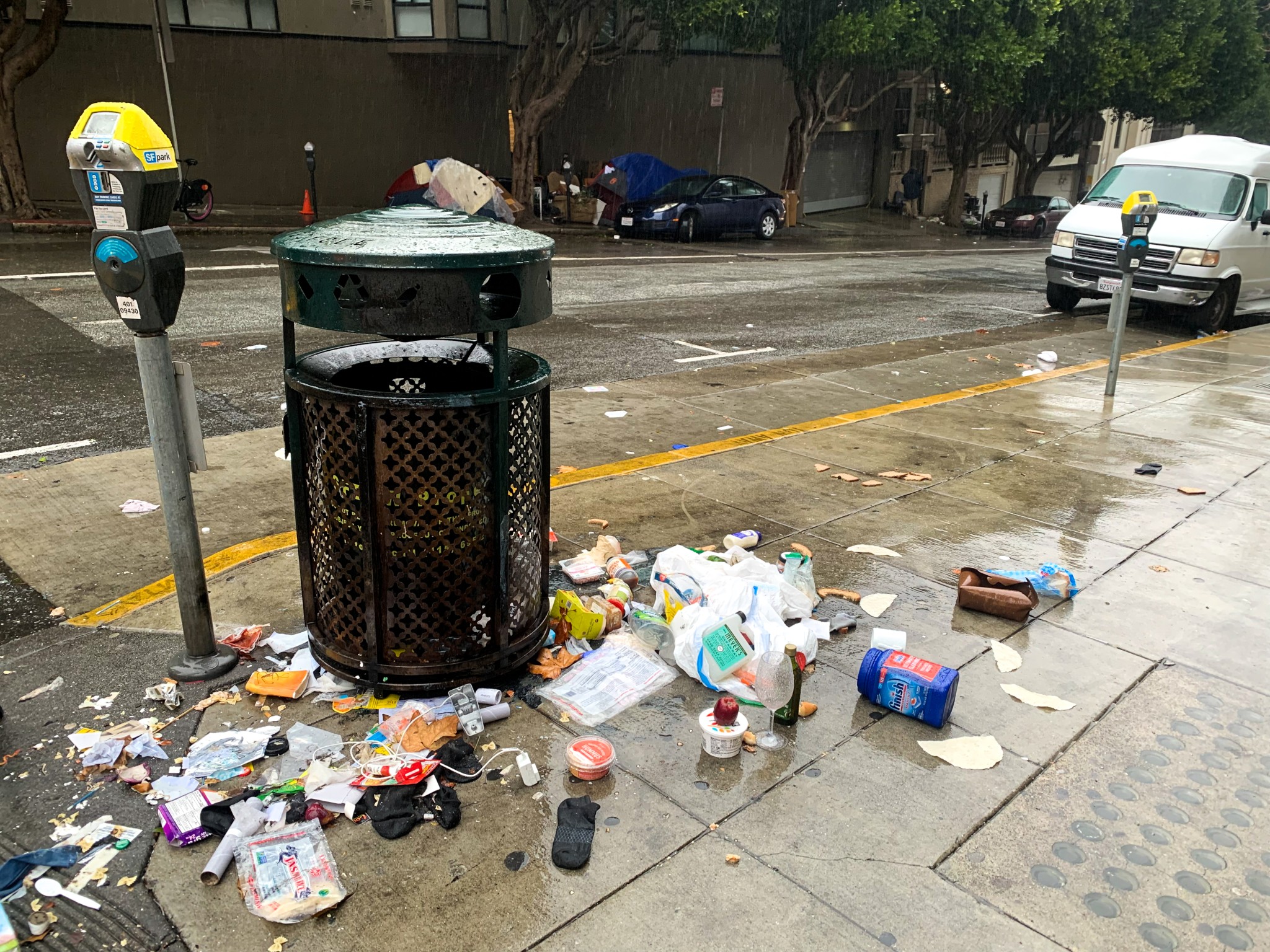 This is part of a series of articles on Gavin Newsom. Click here to read more.

When the COVID-19 pandemic hit, Gov. Gavin Newsom followed the Chinese Communist Party’s strategy of shuttering businesses and requiring people to stay inside their homes. “Home isolation is not my preferred choice,” said Newsom in announcing California’s lockdown on March 19, 2020, “but it is a necessary one.”

Mark Ghaly, Newsom’s health and human services secretary, proudly told the Los Angeles Times that the governor’s strategy of locking down was “trailblazing” and that it was “the California model.”

Nowhere was the California model more draconian than in the state where it began. It was not until June 15, 2021, that Newsom finally stopped inflicting restrictions and closures on California.

San Francisco was particularly hard-hit by Newsom’s dictates. The city was vulnerable to collapse via lockdowns because white-collar jobs contribute about 72 percent of the city’s GDP. When the offices of San Francisco’s major corporations were forced to close — for a period of time that exceeded that of most of the nation — there was no going back. Office attendance rates remain at 40 percent of their pre-pandemic level, according to an October report by San Francisco’s Office of the Controller.

Without office workers to enforce the safety generated by large numbers of law-abiding citizens, crime and homelessness have been allowed to fester.

The city’s downtown is a shell of its former self. Security guards are present at the entrance of virtually every office building, in and out of which trickle small numbers of people. Fast food restaurants and coffee shops have either closed or removed their seating areas so as to avoid homeless people setting up shop. Garbage is thrown everywhere and piled up on the sidewalk. 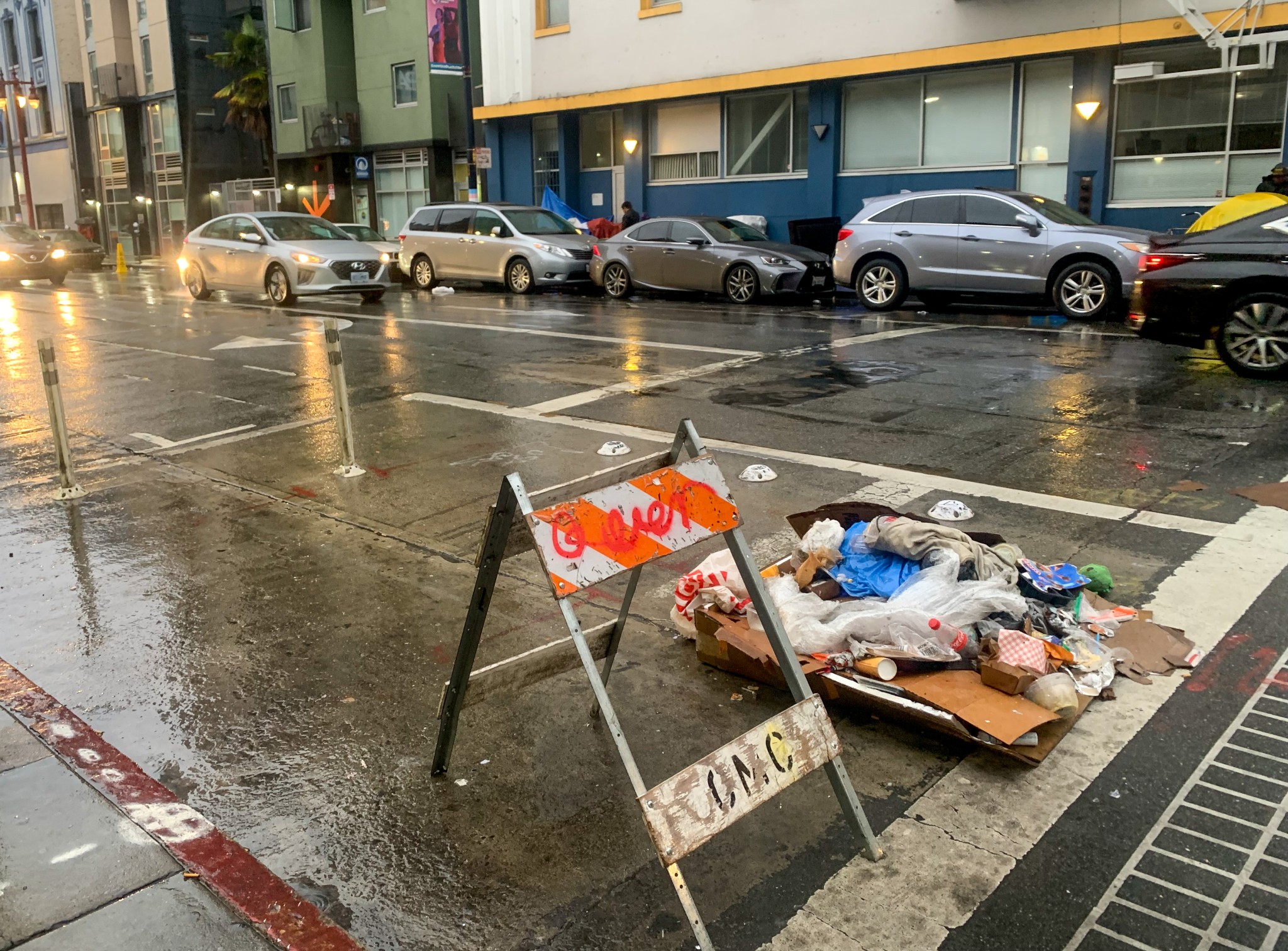 I counted the number of people walking past me in the Financial District who were wearing masks. Out of 80 people, 35 were wearing masks outside — a huge proportion two and a half years after the pandemic began. It might feel preferable to these perennial maskers to hide their faces amid the droves of roaming homeless people and the ever-present fear of crime.

Corporations have flooded out of the city. Credit Karma, Oracle, and Snapchat are moving their headquarters elsewhere. Companies that have stayed are allowing many of their employees to work remotely — a habit change caused by Newsom’s orders — and thus are dropping much of their office space. Companies that are significantly decreasing their footprint in San Francisco include Airbnb, Ancestry, Eventbrite, PayPal, Pinterest, Salesforce, Slack, Scribd, Stripe, Trulia, Twitter, Wish, Yelp, and Zynga.

Right now, vacancies have soared to 24.1 percent, according to that October report. That exceeds the proportion of vacancies during the Great Recession and represents a rise in vacancies that exceeds any other U.S. metro area. JLL, a real estate services firm, predicts that the percentage of vacancies will soon rise to 30 percent.

“These idiots have no idea what they’ve done,” John Dennis, the chairman of the San Francisco GOP, told The American Spectator. “They have no idea how they’ve destroyed the commercial real estate market…. They really opened up Pandora’s box, and it’s going to have long-term implications.”

The Democrats aren’t doing anything to solve the problem, he said. “They’re expecting wealth creation to just happen … that we’ll be able to continue to siphon money off of people forever. They’re destroying what San Francisco built.”

Property taxes are the City and County of San Francisco’s biggest source of revenue. With vacancies this high, the financial hit is resounding. Last month, city economist Ted Egan told San Francisco’s Board of Supervisors that he predicts the city to lose $1 billion from its budget over the next six years because of the effect of remote work on the city’s economy.

City officials are coming to the realization that San Francisco isn’t coming back from this.

“Today it is clear to me and many of us that full-time in-person work that our economic core is counting on is not returning to the same level as it has without incentives or policy changes,” supervisor Ahsha Safaí said at a Board of Supervisors meeting last month. “We are facing a significant iceberg coming to us in the City and County of San Francisco.”

“Under no scenario are we anywhere back to normal by 2026,” said Egan.

San Francisco has also lost huge numbers of conventions, which were previously a major driver of the economy. Prior to the pandemic, the city typically hosted 30–50 major conferences a year. In 2021, however, only 8–10 major conferences occurred. This was not just because companies put events on pause due to pandemic; many events typically hosted in San Francisco have moved to other cities.

Enrique Nascimento, who works at a convention center downtown, told The American Spectator, “Companies don’t come here anymore for their big conventions. So we’re losing a lot of business. It’s such a fun city, so beautiful, but it’s definitely gotten worse.”

Another measure of activity, public transportation use, also offers a bleak number: ridership for the BART system was at only 32 percent of its pre-pandemic ridership as of September.

It is simply uncomfortable to live in the city: Dennis said his 16-year-old daughter used to walk around the neighborhood all the time, but now won’t even walk three blocks to the local Walgreens at night. With the city’s pervasive crime and homelessness problems, San Franciscans are streaming to the exits.

Newsom, magnetically attracted to control as the solution to every problem, gravely damaged San Francisco. The city will only get worse.

See How Bad Gavin Newsom Let Crime Get in California

How Newsom Became Governor: A Spoils System and a Billionaire Pseudo-Father