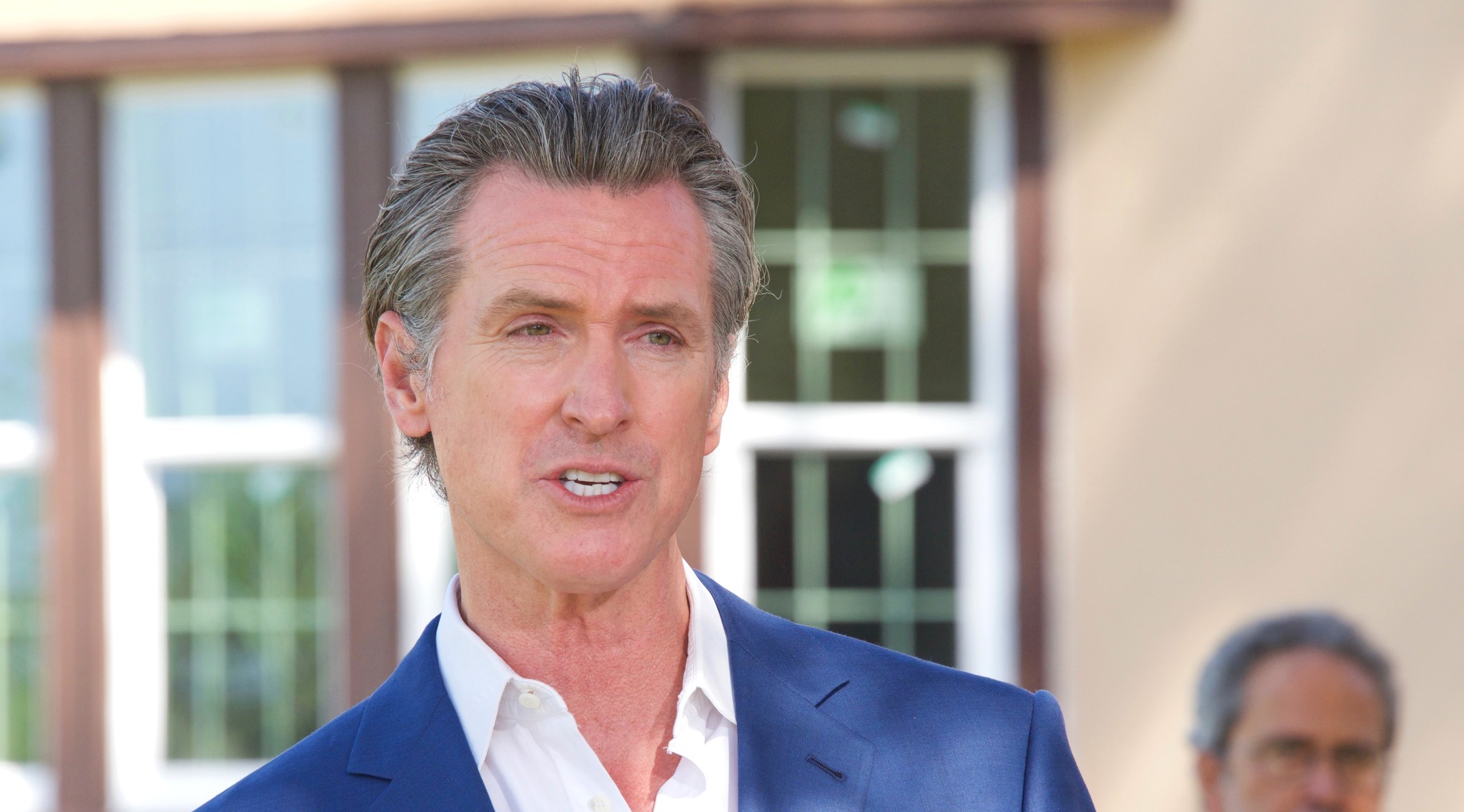 It is astonishing how much Gavin Newsom owes his success to privilege and connections. The California governor’s ride to the top was powered by family links to high-level politicians and a father-son relationship with a billionaire.

It’s the classic story of a Democratic politician given power on the basis of a spoils system.

Newsom was appointed to his first position, San Francisco’s parking and traffic commissioner, after he held a fundraiser for the campaign of the man who later appointed him, Mayor Willie Brown. Brown is well known for his practice of giving posts to those who serve his interests (including now–Vice President Kamala Harris).

Newsom was only in the position to host the fundraiser for Brown because Brown was close with his father and Newsom was a successful businessman. Of course, Newsom’s businesses only existed because they had been backed by Gordon Getty, the billionaire heir of oil riches.

Newsom opened his first business, PlumpJack Wine & Spirits, in 1992 alongside Billy Getty, Gordon’s son. The duo named their business after an opera written by Gordon Getty.

Newsom and Billy Getty’s businesses were successful and grew to include two clothing stores, a Napa Valley winery, five restaurants, and a hotel. An investigation by the San Francisco Chronicle in 2003 found that Gordon Getty was the lead investor in 10 of Newsom’s 11 businesses. In addition, at the time Newsom was running for mayor, Gordon Getty owned 49 percent of the businesses.

Why did Gordon Getty do so much for Newsom? Gordon once said that he considers Gavin to be like a son to him. The two were so close that Greg, a San Francisco resident, told The American Spectator that he would always see Newsom sitting with Gordon Getty at the Balboa Cafe, one of Newsom’s restaurants, and that Gavin would often be drunk. Much of the Balboa Cafe’s success came from its reputation as a hub for high-society life.

When business partners Billy Getty and Newsom had a falling out over the fact that Newsom had taken up residence in one of their property investments and was refusing to leave even though Billy Getty wanted to sell it, Gordon Getty took Gavin’s side over his biological son’s.

“I believe 100 percent in Gavin, and when he is accused of wrongdoing, I’m on his side,” Gordon Getty told the San Francisco Chronicle at the time of the public dispute. He offered to buy Billy Getty’s part of the house so that Gavin could continue living in it.

The relationship continues to this day. Last Saturday, Newsom and his wife, Jennifer Siebel Newsom, attended Gordon Getty’s 89th birthday party. They looked as chummy as ever.

Gordon Getty and Newsom got to know each other through Gavin’s father, William Newsom. Gordon Getty and William Newsom’s relationship, which began when they attended high school together at Saint Ignatius College Preparatory in San Francisco, was characterized by mutual financial benefit as well as their shared work to support Gavin. William Newsom and Gordon Getty took the young Gavin with them on elaborate trips as he was growing up, including safaris in Africa and a polar-bear-watching expedition by the Hudson Bay.

In the 1970s and 1980s, William Newsom, who became a state appellate judge, worked to sue Gordon Getty’s father so that they could get more money out of the Getty family trust. (William Newsom was appointed to be a state appellate judge at least partially on the basis of his close friendship with California Gov. Pat Brown. Pat Brown was the father of Gov. Jerry Brown, the man who elevated the judge. And William Newsom’s father was an early backer of Pat Brown’s gubernatorial campaign.) William Newsom and Gordon Getty’s efforts to gain control of the family trust failed, but Getty’s father, J. Paul Getty, decided to hand over the administration of the family trust to Gordon.

That’s when Newsom used his connections as an appellate judge to vastly increase Gordon Getty’s fortune. He went to Democratic state Sen. Bill Lockyer and convinced him to push for a bill that would allow trusts to be partitioned. The law passed. As a result, Getty was able to divide the family’s fortune into four parts, making it much easier to access, and thus vastly increasing his own wealth.

William Newsom got back what he put in when he was chosen to oversee large parts of that wealth — for hundreds of thousands a year.

As Peter Byrne noted in SF Weekly, Newsom used much of this fortune for his son’s financial benefit: “William Newsom’s closeness to the Gettys opened the door for Gavin to piggyback on what quickly turned into a highly profitable real estate investment in Maui.” In that investment, William Newsom brought his son into his $125,000 stake in Hawaii real estate, which grew to over $1 million in just six months.

Gavin Newsom maintains that he is a successful businessman not because of Gordon Getty or his father but because of his own acumen.

“I started every one of those businesses,” he said in an interview with the San Francisco Chronicle. “Conceived of them, wrote the business plans, got all the investors, and by no means are the investors exclusive to the Getty family.”

John Dennis, the chairman of the San Francisco Republican Party, told The American Spectator that he knows some of the investors in the PlumpJack businesses and that they “love their investments.”

“Every city has them,” said Dennis. “These restaurants are just evergreen perennial winners; they’ve got the right formula and they’ll go on for decades.”

However, Dennis said that he has also heard that Newsom was really a “terrible businessman.” Newsom’s stake in the businesses is now in a blind trust, and he is no longer involved in running them. (While he was mayor, he sold his businesses to Gordon Getty and subsequently bought them back from Getty when he was elected lieutenant governor.)

Back when Newsom and Billy Getty had their falling out, similar questions arose over Newsom’s business talents when Billy Getty’s wife, Vanessa, questioned her husband over Gavin’s role in their joint business efforts. Though Billy Getty and Gavin were once extremely close, as Gavin was the best man at Billy and Vanessa’s wedding, their rift continues today. Vanessa Getty has since thrown all of her support behind Kamala Harris.

After Willie Brown elevated Newsom to the position of parking and traffic commissioner, Brown then appointed Newsom to San Francisco’s Board of Supervisors, which is roughly equivalent to a city council.

That elevation came through family connections as well.

William Newsom admitted that Gavin was only appointed to the Board of Supervisors by Brown because Burton convinced Brown to do so.

“It was based on Burton’s friendship with me,” William Newsom told Byrne. “And he liked Gavin. Besides, they needed a straight white male on the board.”

(In addition to being friends with Burton, William Newsom was close to Willie Brown, who in 1968 convinced him to run for state Senate. He lost the race.)

Newsom was also essentially selected by Willie Brown to succeed him as mayor. (Brown could not seek reelection because of term limits.) However, Newsom first had to get past a legitimate challenger, Matt Gonzalez, a member of the Green Party, who was to the left of Newsom.

And despite a series of scandals in Newsom’s first term as mayor of San Francisco, he was easily reelected with 73 percent of the vote. Brown voraciously defended Newsom at the time of the mayor’s scandals. “I don’t think the public is terribly distracted,” Brown said. “I think the public in many cases finds it rather entertaining that suddenly they have someone who’s still alive holding public office.”

Newsom faltered in his first gubernatorial election and dropped out before declaring his candidacy for lieutenant governor, a role in which he accomplished little but was seen as the heir-apparent for the governor’s mansion. In his first successful gubernatorial primary, Newsom beat out the second-best Democrat by more than 20 percentage points. Newsom won the general election by a huge margin, with 62 percent of the vote.

Newsom portrays his past as one marked by the deep struggles of growing up poor and with a disability.

His mother, Newsom frequently points out, worked three jobs to pay the bills and was primarily a secretary. Newsom says that his father (his parents divorced when he was young) was not able to help the family out financially on many occasions. Newsom suffers from severe dyslexia, a condition that makes it difficult for him to read. And to make his childhood worse, Newsom says that he was bullied over his bowl cut and lisp.

“Going from that to being treated like a god made him very uncomfortable,” his wife told the New Yorker in 2018.

Newsom wants his political story to be one of striving to overcome difficulties in order to achieve success.

He tried to get his communications strategy firm to run ads on his difficult years growing up, but those ads tested poorly with an audience that had heard for years how Gordon Getty and his father had used their connections to power Newsom to the top. The campaign instead ran ads on Newsom’s courage.

Newsom didn’t completely abandon his vision to portray himself as coming from a difficult background. During the 2018 gubernatorial primary, he wrote a post on Facebook that highlighted his poor mother and his dyslexia.

Newsom wants to be his own hero in a peasant-to-king fantasy. But when everything was handed to you by your billionaire pseudo-father and your well-connected biological father, you may as well turn to slicked-backed hair, $10,000 suits, and an aura of total arrogance.

See How Bad Gavin Newsom Let Crime Get in California