by Ellie Gardey
A man carries a metal rod around San Francisco, California, on Dec. 1, 2022 (The American Spectator) 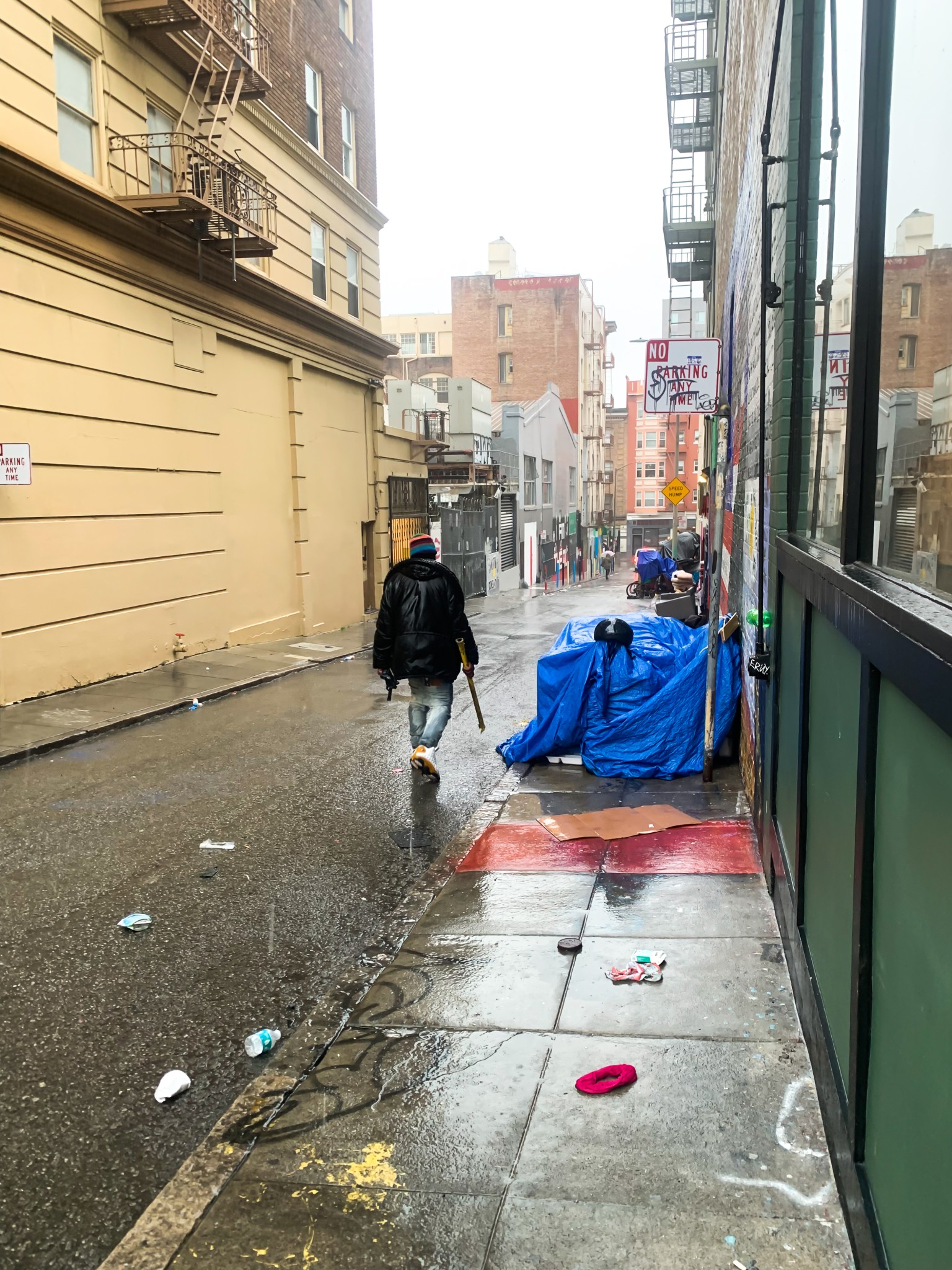 California Gov. Gavin Newsom had a chance this year to fight California’s rampant crime problem. He didn’t take it.

Both Democratic and Republican state Assembly members proposed in January that California drop or severely limit Proposition 47. Proposition 47, which was passed by California voters in 2014, downgraded certain offenses from felonies to misdemeanors. These offenses include shoplifting when the value stolen is below $950 and drug use within limits.

Newsom swept that all aside and derided the effort to undo Proposition 47.

“We’re not walking back on our commitment in this state to advance comprehensive reforms,” he insisted.

Enrique Nascimento, who works at an events center downtown, said that the local Safeway near his house used to be open for 24 hours but recently changed to closing at 6 or 7 p.m. because of the threat of crime.

In addition, Nascimento said that he once tried to visit a Ross Dress for Less store downtown in the morning but found that it was closed: “I was like, ‘Why?’ And they said, ‘Oh, we’re now just open at noon because of the burglaries.’ I don’t know how businesses can survive like that.”

He explained that he has been living in the area for five years and has seen San Francisco decline dramatically during that time period. “It’s kind of snowballed,” he said.

Nascimento said that he has seen robbers keep track of the prices of the goods they are stealing to ensure that their collective value does not exceed $950. “They pretty much do the math in the store, checking the prices and everything, and so the next day they do it again,” he said. “That’s why there’s a lot of stores closing.”

“With the security guards,” Nascimento said, “they are instructed to not touch them and just wait for the police. And the police have so much to do that they never arrive on time.”

Wagner Cantao, who lives just outside of San Francisco, described witnessing the same phenomenon: “Sometimes you’re in CVS or Walgreens and a guy comes in with a bag and grabs as many things as he can. The manager and security guard can’t do anything. By the time the cops arrive, they’re gone. They’re really fast.”

“The homeless here are harmless,” said Cantao, “but then there are the people who rob stores. If you steal up to $950, they won’t prosecute it.”

Though officials will sometimes prosecute these offenses, the perception among business owners and local residents is that the police are likely to enforce felony offenses and let misdemeanors slide.

Another major crime problem in the city is so-called smash-and-grabs, which have terrorized stores in San Francisco in recent years.

“During COVID,” explained Cantao, “they would come as gangs, pull up at the front of shops, like Saks Fifth Avenue or Louis Vuitton, and steal those expensive handbags and sell them on the black market for a third of the price. Now they have police cars sitting outside of those stores.”

San Francisco is home to numerous high-end retail stores. Last year, robbers ransacked the Louis Vuitton store near Union Square. Such lootings have continued, despite a significantly increased police presence in the area to address the problem. For example, police officers have been standing guard in front of downtown San Francisco department stores in groups of up to four. Police cars also sit in front of Union Square and downtown stores. 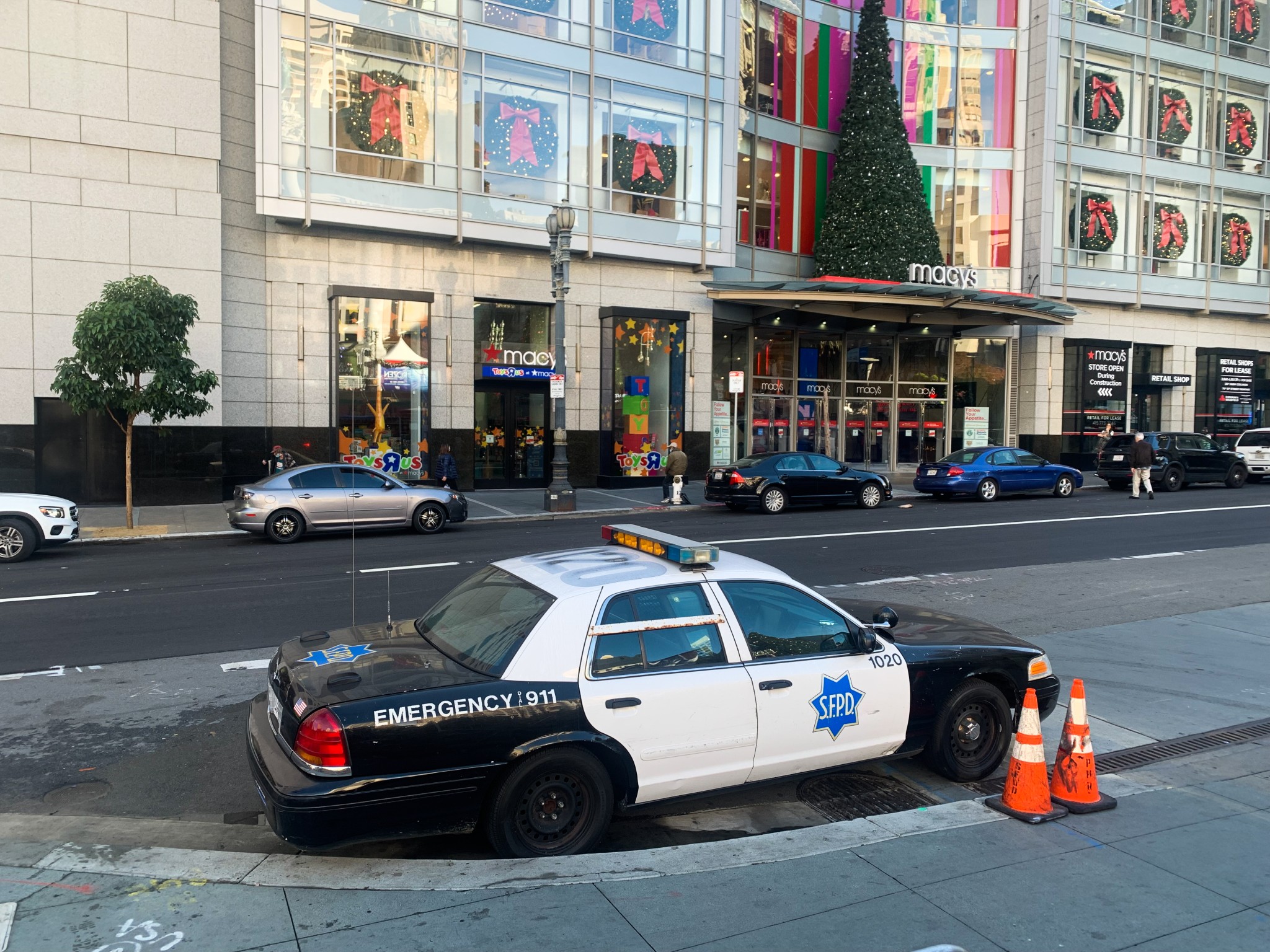 A police car sits in front of Union Square in San Francisco, California, on Nov. 30, 2022. (The American Spectator)

Smash-and-grabs have continued to plague the city. On Nov. 26, four people robbed Leica, which sells high-end camera equipment, and threatened its employees at gunpoint. The criminals made off with $180,000 in merchandise. 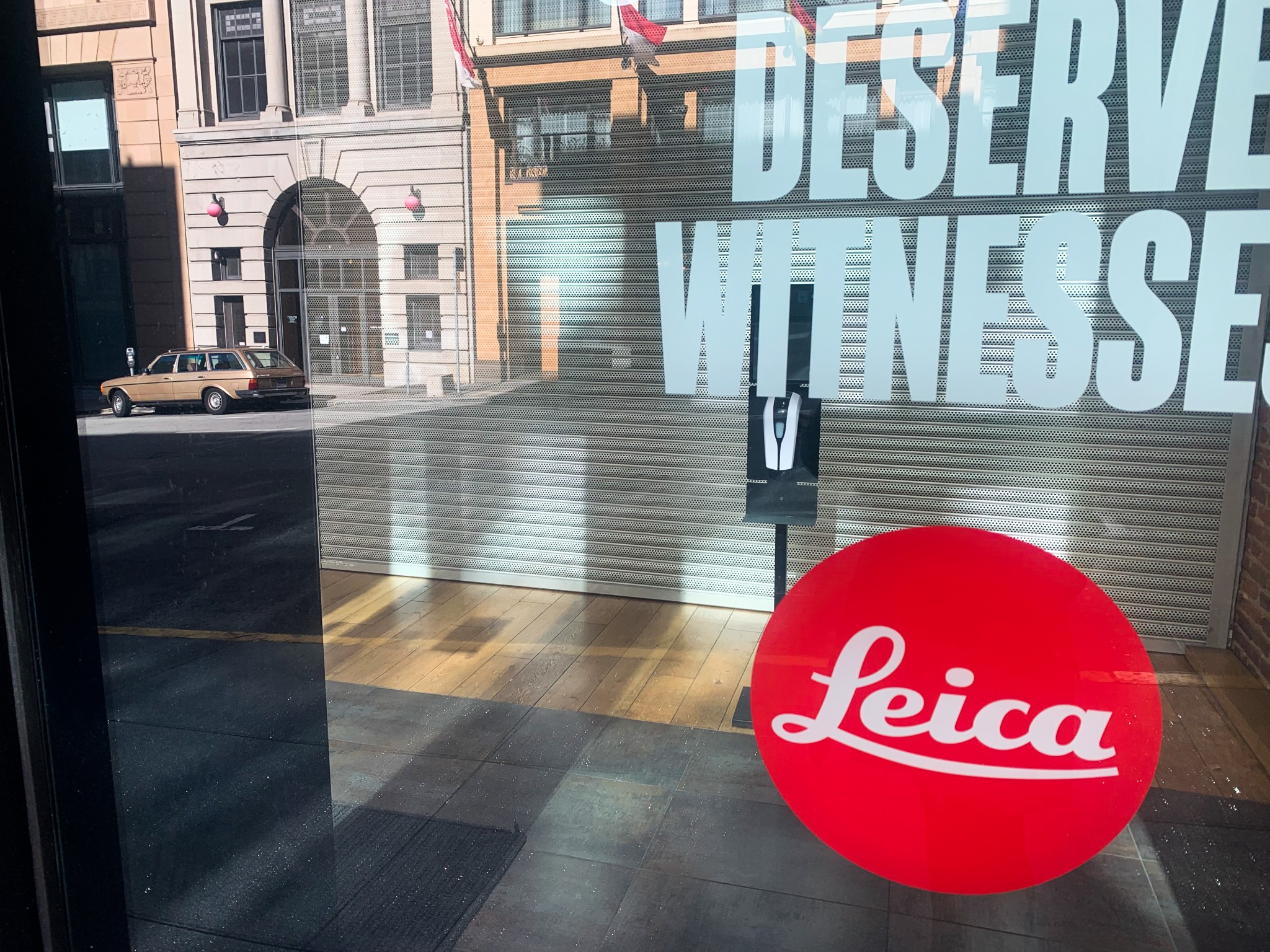 Leica, a camera store, remained closed the week following the robbery. A sign outside the store read, “Due to unfortunate circumstances, Leica Store will be temporarily closed until further notice.” (The American Spectator)

An environment of fear pervades downtown San Francisco. The week after the robbery, in a coffee shop four blocks from Leica, three young professionals discussed among themselves the danger of the city. They reassured each other that their workplace provides private security guards. One reminded the others of the need for “situational awareness.”

In convenience stores downtown, almost every item is behind plexiglass. Shoppers need to ask a store associate to grab each item for them. Still, homeless people wander around the stores.

“I go to some shop over here,” explained Nascimento, “and I see like soap or something and it’s behind padlocks. You know, everything.” 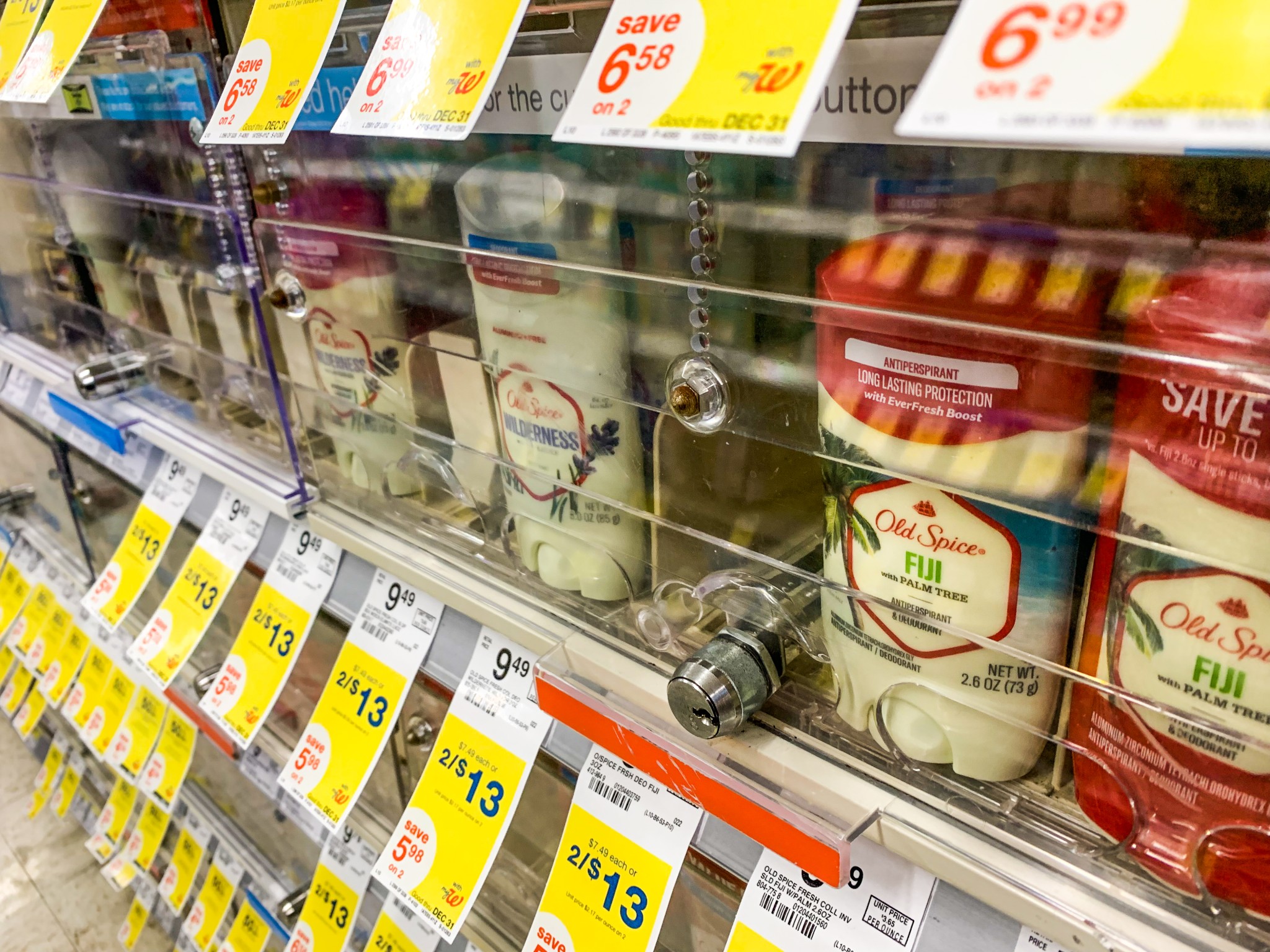 Items in Walgreens are behind plexiglass in San Francisco, California, on Nov. 30, 2022. (The American Spectator)

Drugs are also a serious problem in San Francisco. The issue is linked to the homelessness epidemic, as many of the homeless are drug addicts and/or drug dealers.

While walking around San Francisco, I witnessed several people using and dealing drugs. The city distributes syringes and pipes under the philosophy of “harm reduction.” In California, it is legal to possess certain drug paraphernalia. 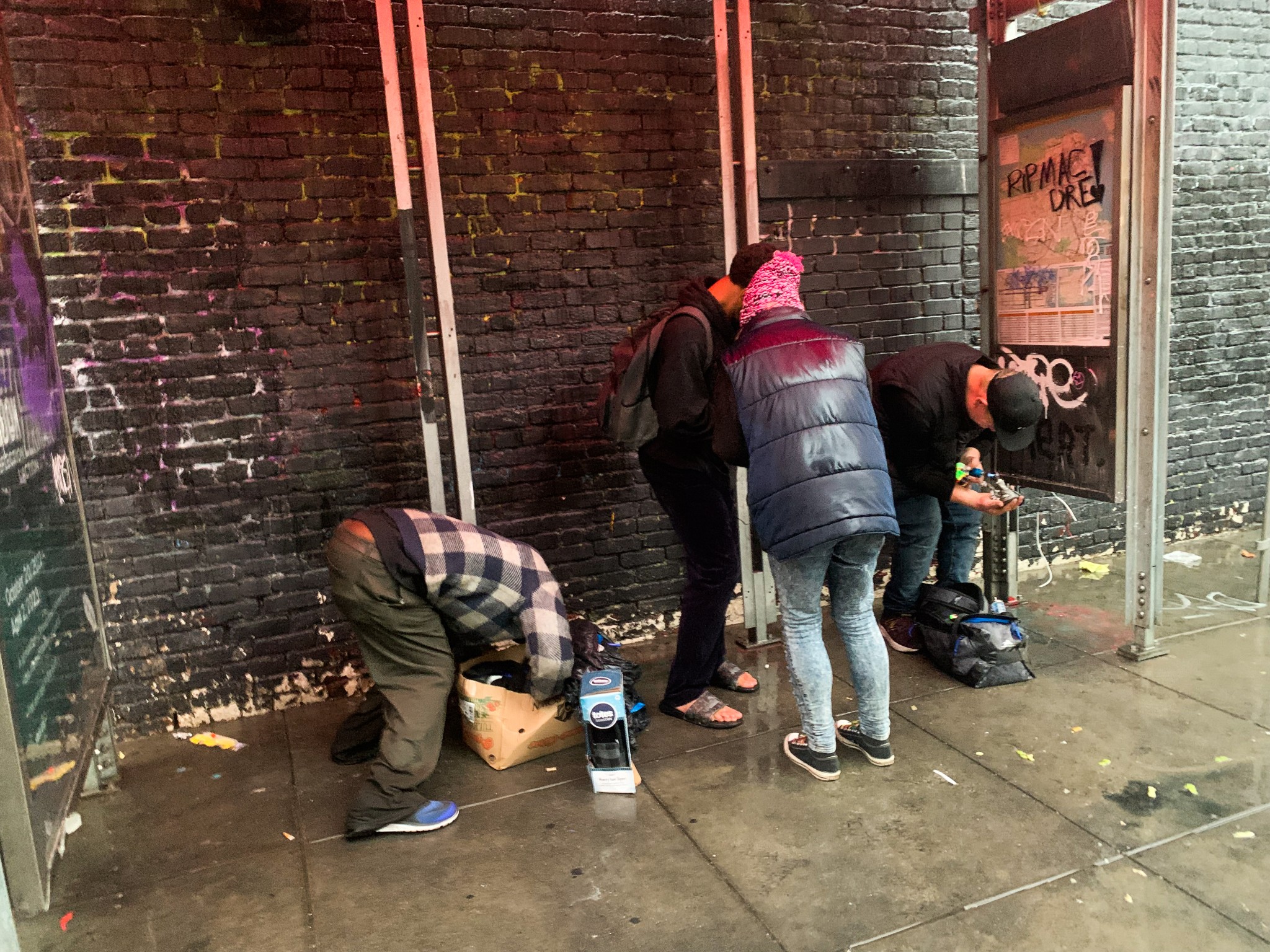 A man uses drugs in San Francisco, California, on Dec. 1, 2022. (The American Spectator)

This instance of drug use occurred within a block of police officers and near commuters who were heading to work in the morning. Over 500 people in San Francisco have died from drug overdoses this year alone.

“It’s a different kind of drug problem,” said Nascimento, “because people actually get crazy and have so many mental issues.” 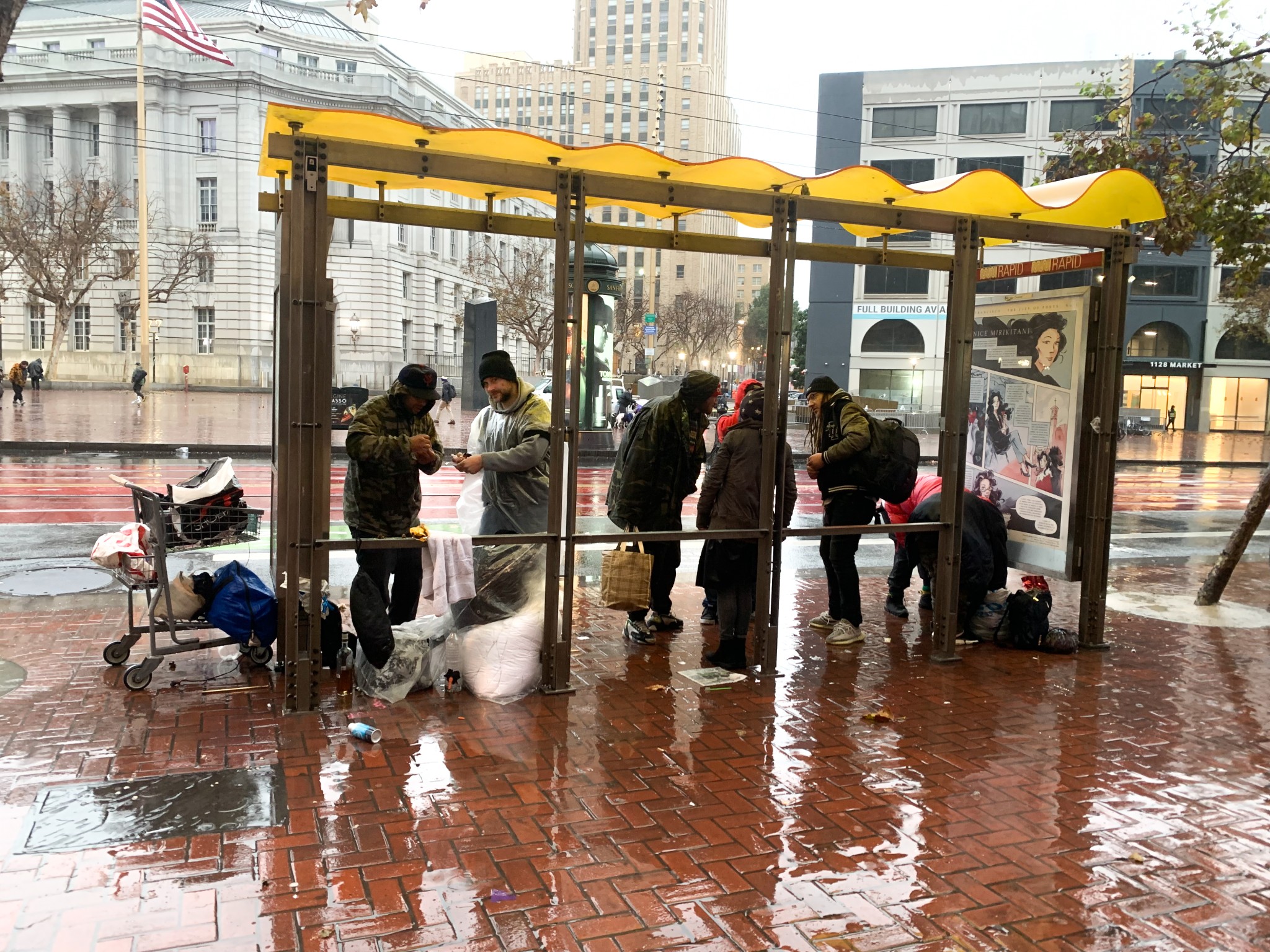 The homelessness problem is also connected to violence. I encountered a man with a tire around his neck who was swinging around a metal rod while walking the city’s streets.

A man carries a metal rod around San Francisco, California, on Dec. 1, 2022. (The American Spectator)

In June, San Francisco’s district attorney, Chesa Boudin, was removed from office in a recall election. Voters were unhappy with his lax policies on crime. Boudin announced he would not seek charges for illegal items discovered in “pretextual” traffic stops, convinced Newsom to sign a law that would allow parents charged with crimes to undergo classes in order to have their charges dropped, and reduced the city’s jail population by 40 percent during the height of the pandemic.

Since Boudin’s removal, there has not yet been a discernible decrease in crime.

William Sousa, a professor in the Department of Criminal Justice at the University of Nevada, Las Vegas, explained to The American Spectator what can happen to a community when minor crimes go unpunished.

Sousa said that police in some communities in the U.S. are not able to do much about minor crimes because of policies put in place by lawmakers. He said that the problem is that if the police don’t have the ability to arrest individuals or issue citations, “people know there’s not a lot the police will do.” Sousa explained that security guards are also put in a difficult position. “If a security guard acts, they could potentially be in the wrong legally speaking,” he said.

“If [minor crime] happens too often, you can have businesses closing and the fabric of the community can be impacted by it…. Citizens fear these types of things, they can lead to the downfall of certain communities,” he said. “Eventually, there would be a tipping point.”

Newsom said that the perception that his party is poor at managing crime is a “messaging problem.”

Citizens in San Francisco, however, are not upset with the message they are getting from California Democrats on crime. Instead, they are upset with Proposition 47 and how it enables retail theft and open drug use.

Proposition 47 is maintained because of the policies, not the messaging, of Gavin Newsom.