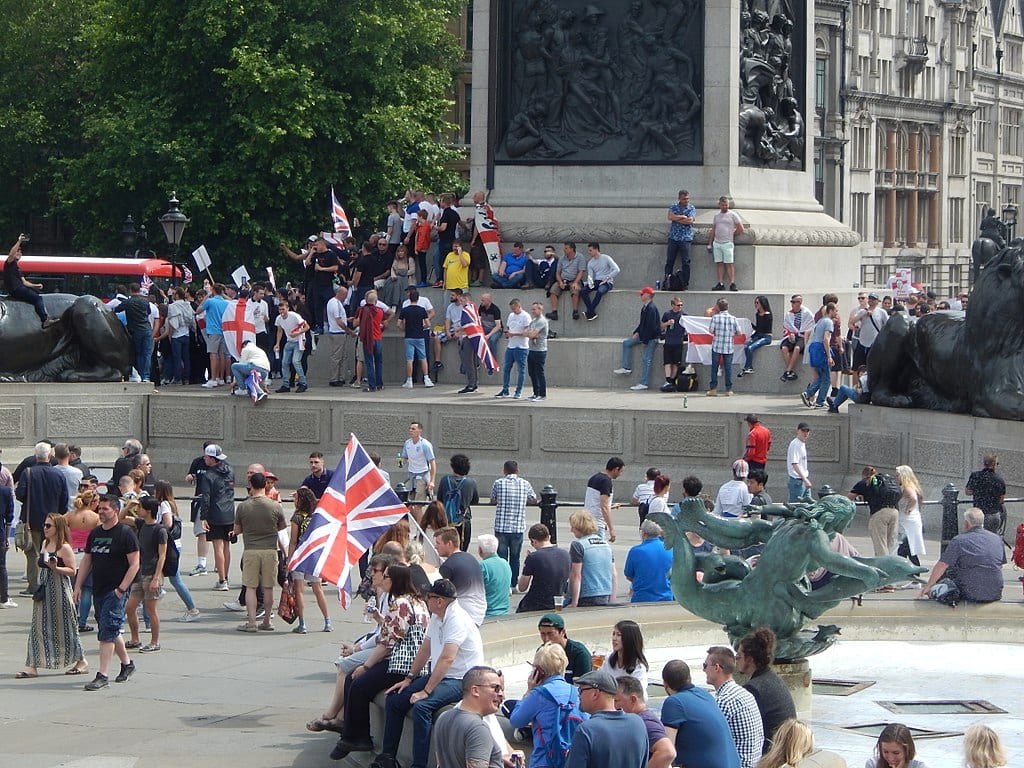 The strange case of Tommy Robinson, otherwise known as Mr. Yaxley Lennon, and the issue of the current state of Freedom of Speech in the UK is climbing up the public agenda. The particulars of his case, of contempt of court and breach of the peace, are not so important as the climate in which it occurred. What is interesting is that 600,000 people signed a petition to release him knowing that he had pleaded guilty. Then on June 6, thousands marched in London to protest Mr. Robinson’s imprisonment. Since then, smaller protests have continued around the country, with more planned. What is going on?

Tommy Robinson has, almost by default, become an icon of the Freedom of Speech movement in the UK. A convicted fraudster and founder of a working class, anti-Islamist, street movement, the English Defence League, he is an unlikely hero. Despite judicial warnings, he was arrested and convicted — after pleading guilty — for contempt of court after filming defendants entering court, ostensibly in breach of court-ordered reporting restrictions.

The trial Robinson was covering is one of many across the country where groups of young, predominantly Muslim men have been charged with the industrial rape of girls as young as twelve. Most of these cases get minimal coverage in the mainstream media — in order, in part to maintain good, “community relations.” Robinson was arrested, charged, and imprisoned in a mere four hours, without access to his own lawyer. His sentences are to be served consecutively, not concurrently as is the legal norm. It is hard not to conclude that this was to make a public example of him.

The concept of freedom of speech in the UK is one of the few things that are, or at least used to be, regarded as sacrosanct. Combined and conjoined with the freedom of the press, it has a long and distinguished history. With folk memories stretching back but dating specifically to John Milton who in 1644 wrote, “Give me the liberty to know, to utter, and to argue freely according to conscience, above all liberties.” But in the period since then, slowly at first, and reaching its apogee in the writings of John Locke, Jack Wilkes, and John Stuart Mill, it becomes a very part of the British self-image. As Mill pointed out, “If all mankind minus one, were of one opinion, and one, and only one person were of the contrary opinion, mankind would be no more justified in silencing that one person, than he if he had the power, would be justified in silencing mankind.”

We have reached a near post-enlightenment age in the UK: a new Medievalism where an individual or most perniciously a group’s feelings now outrank the basic verities of freedom of expression.

The existence of academic no-platform policies across further education is one aspect of this, as is the self-censorship of the liberal elite wherever they gather, be they on state-sponsored broadcasters, or in chambers of elected representatives. Language is subverted and rules are put in place to silence and exclude thoughts and words that breach recently instituted decency laws.

Not long ago the internet promised to be the wild frontier for freedom of speech. On platform after platform people could speak freely, publish independently, beyond the reach of editors and censors. But as the internet grew and the fortunes of those who hosted speech grew, so did their exposure to Government and Government’s insatiable hunger to control. Freedom is messy and uncomfortable. Much written and produced was and is clearly unpalatable and often downright inaccurate. But we already have laws to protect reputations and to prosecute untruths. What has become the great danger is the way in which Governments are now conspiring with the big platforms to restrict information, to sanitize it and to ensure that it conforms to the current tick list of what is and isn’t acceptable.

The list of what is and isn’t acceptable grows like knotweed in a stagnant pond. Ism’s and ’phobias proliferate and are condemned. The most obvious are racism, sexism, homophobia, xenophobia, Islamophobia, but now we have transgenderism, fattism, and Lord alone knows what else. All are labeled beyond the pale and all are to be driven out. All are labeled hate speech. Subtlety there is none, and freedom of speech has left the preserve of so-called fascists. Today the public space is dominated by screaming crowds of the entitled and their cheerleaders in the media.

Lifeboatmen get sacked for offensive mugs, National Trust volunteers are suspended for disagreeing with the overt promotion of homosexuality, bakers are charged for not baking a cake, and internet giants take down expressions of opinion that do not breach any law about incitement, but merely state opinions. The police state clearly that they believe calling Islam “sexist” or “violent” or “aggressive” could get you arrested. It is in this environment the case of Tommy Robinson must be seen.

Raheem Kassam, former editor of Breitbart London and one of the organizers of both the Freedom of Speech rally a few weeks ago and the “Free Tommy Robinson” rally on June 6, put it this way. I had asked, why, when Robinson himself accepted that his actions on reporting from the steps of a court case breached a court order, he had done so.

The entire case screams of the persecution of one type of person, while the government ignore the same sort of thing in a different place done by different people. There have been plenty of occasions where others could be said to have done the same. What worries me is the ability of a judge to become an activist and to sentence someone to consecutive sentences, unusual in these days, concurrent being the norm. The judgement was unnecessarily punitive, it was meant to send a message, so we are sending one back.”

No one in that crowd would disagree that he was sailing close to the wind. But he was sentenced to say ‘we don’t want coverage of this sort of trial.’”

Bluntly through Government, corporate and self- censorship, we have a society that has turned its back upon the basic enlightenment premises of freedom of the press and freedom of speech.

Outside the BBC there is a statue of George Orwell, I have stood and watched many of the great and the good of modern popular journalism stop and look at the words inscribed there, nodding profoundly as they do so.

“If liberty means anything at all, it means the right to tell people what they do not want to hear,” it says.

Perhaps in the current climate, they may be wiser to read a different Orwell script:

Unpopular ideas can be silenced, and inconvenient facts kept dark, without the need for any official ban. Anyone who has lived long in a foreign country will know of instances of sensational items of news — things which on their own merits would get the big headlines — being kept right out of the British press, not because the Government intervened but because of a general tacit agreement that ‘it wouldn’t do’ to mention that particular fact.

Gawain Towler is founder of CWC Strategy, the former Communications Director for the UK Independence Party, a widely published commentator, and a writer for the Middle East Forum.