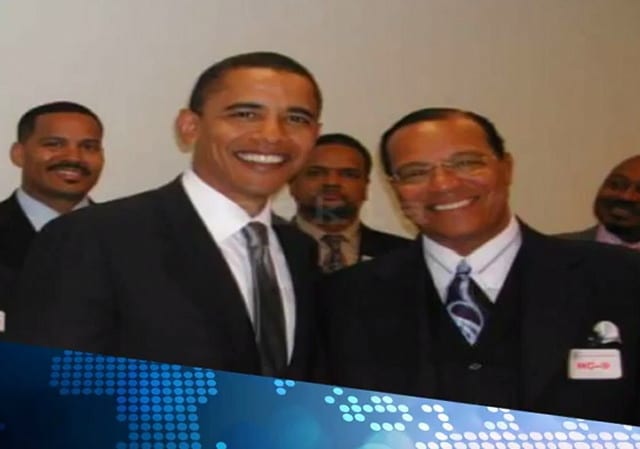 So the CBS affiliate CBSDC headlined the story this way:

The story said this, in part:

Delivering Part 2 of his Saviours’ Day 2015 sermon in Chicago on Sunday, Farrakhan cited 9/11 conspiracy theorists and stated that the root of the attacks “was not committed by Arabs or Muslims at all.”

“It is now becoming apparent that there were many Israelis and Zionist Jews in the key roles of the 9/11 attacks,” the Nation of Islam leader said. “If they can prove me wrong, I’ll pay with my life, since they want to kill me anyway. Prove me wrong. We’re dealing with thieves and liars and murderers.”

Farrakhan claimed that many Israelis were arrested immediately after the attacks but released and sent to Israel.

“We know that an Israeli film crew dressed as Arabs were filming the Twin Towers before the first plane went in,” he said. “In other words, these Israelis had full knowledge of the attacks.”

Farrakhan continued: “We know that many Jews received a text message not to come to work on September 11th. Who sent that message that kept them from showing up?” Within minutes of the attacks, Ehud Barak, the founder and master of the Israeli military’s covert operation force, was in a London studio of the BBC blaming Osama bin laden and calling for a war on terror. And we know that Benjamin Netanyahu told an audience in Israel, we are benefitting from one thing and that is the attack on the Twin Towers and Pentagon and the American struggle in Iraq. He added that these catastrophes and wars would swing the American public opinion in the favor of Israel.

This comes on the heels of the release of a previously long held — since 2005! — photograph of a smiling Senator Barack Obama with a smiling Farrakhan at a gathering of the Congressional Black Caucus.

After Farrakhan’s latest anti-Semitic spewings several members of the CBC stood strong for the rabid anti-Semitism. Fox News headlined it this way:

Pol who warned of bigoted rhetoric justifies ties with Louis Farrakhan, lashes out at Jewish group

A Democrat who has come under fire for his ties to Nation of Islam leader Louis Farrakhan despite a long record of warning that hate speech poses one of the greatest threats to U.S. security dismissed calls from the Republican Jewish Coalition for his resignation, saying the organization lacks credibility in his view.

A defiant Rep. Andre Carson told FOX 59 that the Jewish coalition “doesn’t have any credibility with [him]” and that it’s all part of their political agenda.

“The Congressional Black Caucus is asking that organization to condemn (Israeli Prime Minister) Benjamin Netanyahu and the (Israeli) government for discriminating against Africans who are migrating, who are fleeing dictatorships, who are fleeing oppression,” he added. “There’s a great deal of bigotry and racism happening right now they fail to condemn.”

Carson’s remarks came after he was asked about his ties to Farrakhan, who frequently expresses hostility toward Jews, as well as whites and the LGBT community.

The Indiana congressman is one of eight members of the Congressional Black Caucus known to have ties to Farrakhan, who recently made national headlines when he delivered a major speech in Chicago in which he said “powerful Jews are my enemy” and “Farrakhan, by God’s grace, has pulled the cover off of that Satanic Jew and I’m here to say your time is up, your world is through.” …

The other members of the Black caucus with ties to Farrakhan were recently identified by The Daily Caller as being Maxine Waters of California, Danny Davis of Illinois, Al Green of Texas, Barbara Lee of California, Keith Ellison of Minnesota, Gregory Meeks of New York, and James Clyborn of South Carolina.

And there was this about Congressman James Clyburn of South Carolina, the third-ranking Democrat in the House and a member of the CBC:

South Carolina Rep. James Clyburn attended a 2011 event with Farrakhan and shared the stage with him, even after Jewish groups voiced their opposition to Clyburn attending the event. Clyburn told the Final Call, a Nation of Islam publication, that he was “not bothered in the least bit” by criticisms of his attendance at the event.

As the assistant Democratic leader, Clyburn is the third-highest ranked Democrat in the House. He declined to condemn Farrakhan in a statement released to The Daily Caller News Foundation on Thursday.”

The reaction to all this from the Left? Crickets. To her credit, Congresswoman Barbara Lee (D-CA) tweeted out:

“I’ve spent my life fighting discrimination in every form, from anyone. I unequivocally condemn Minister Farrakhan’s anti-Semitic and hateful comments. This vitriol has no place in our society.”

And some other CBC members were starting to squirm. But most of the media was silent on calls for the Farrakhan groupies who are sitting Members of Congress to resign. One media host, my former CNN colleague Jake Tapper, did speak out. As noted here in Townhall’s headline:

Yet there was the Atlantic as noted by Fox and others offering a defense of all this sewage. The Fox headline:

The story mentioned a co-founder of the “Women’s March” as follows:

The Atlantic magazine faced backlash Sunday after publishing a piece that attempted to justify why Women’s March co-founder Tamika Mallory has declined to cut ties with anti-Semitic Nation of Islam leader Louis Farrakhan.

Thankfully, the New York Daily News stepped up and said:

“Tamika Mallory’s disqualifying embrace of Louis Farrakhan: She can’t lead the Women’s March and back a virulent anti-Semite”

The uncomfortable fact is that as mentioned here before, as far back as President Harry Truman’s 1948 decision to recognize Israel as a state, a decision easily as controversial as the decision by President Trump to recognize Jerusalem as Israel’s capital if not more so, the Left’s anti-Semitism was in evidence. Wrote Truman of the leftist career types in the State Department: “I am sorry to say there were some among them who were also inclined to be anti-Semitic.”

Truman was right. And decades later, as the Democratic National Convention prepared to re-nominate President Obama in 2012, the television cameras caught some of the anti-Semitism in action as delegates and chunks of the guests in the galleries were caught angrily shouting down a proposal to recognize Jerusalem as the Israeli capital. The resolution proposing this was shoved through by a determined Convention chair even though it seemed plain the resolution was opposed in a voice vote. (Not that it mattered — once re-elected Obama refused to carry through on the pledge anyway.)

As documented here many, many times, “playing the race card,” as racism is politely called these days, is part and parcel of the Left in America and always has been. What once was slavery and segregation are now laughably called “identity politics.” And most assuredly, a thorough going part of that racism is anti-Semitism. And when the spotlight is turned on, in this case on a leader of the so-called “Women’s March” and various members of the Congressional Black Caucus or various other lefty Democrats, there is much hemming and hawing at having been caught in the act.

But the “why” behind all of this latest go-round over left-wing support for Farrakhan -the man who once proclaimed that “Hitler was a great man” — is simple to understand. This streak of racism is part of the larger racial agenda that the Left has been preaching for decades. To wit: divide by race. Win elections.

And if, in this case, it means hanging with one of the most vicious anti-Semites of the day? So be it.

One final question? Remember all the uproar when President Trump was — inaccurately — seen as endorsing the anti-Semites and racists of the neo-Nazis in Charlottesville, Virginia? Note well that his critics — who spent their time trying to re-cast Trump as an anti-Semite and racist back then — have for the most part given a pass to those who have in fact seriously backed one of the most blatantly vicious anti-Semitic racists of our day.

Amazing. Or actually — not.