Another Perspective,Top Story Democrats,Joe Biden,Ku Klux Klan Exposing the Democrats’ White Supremacy Myth - The American Spectator | USA News and Politics
Menu
Another Perspective
Exposing the Democrats’ White Supremacy Myth
Biden claimed that terrorism from white supremacy is the most lethal threat to the country.
by Charlie Eastman
Protesters march at the "March of Silence," a protest in support of Black Lives Matter on June 12, 2020. (VDB Photos/Shutterstock) 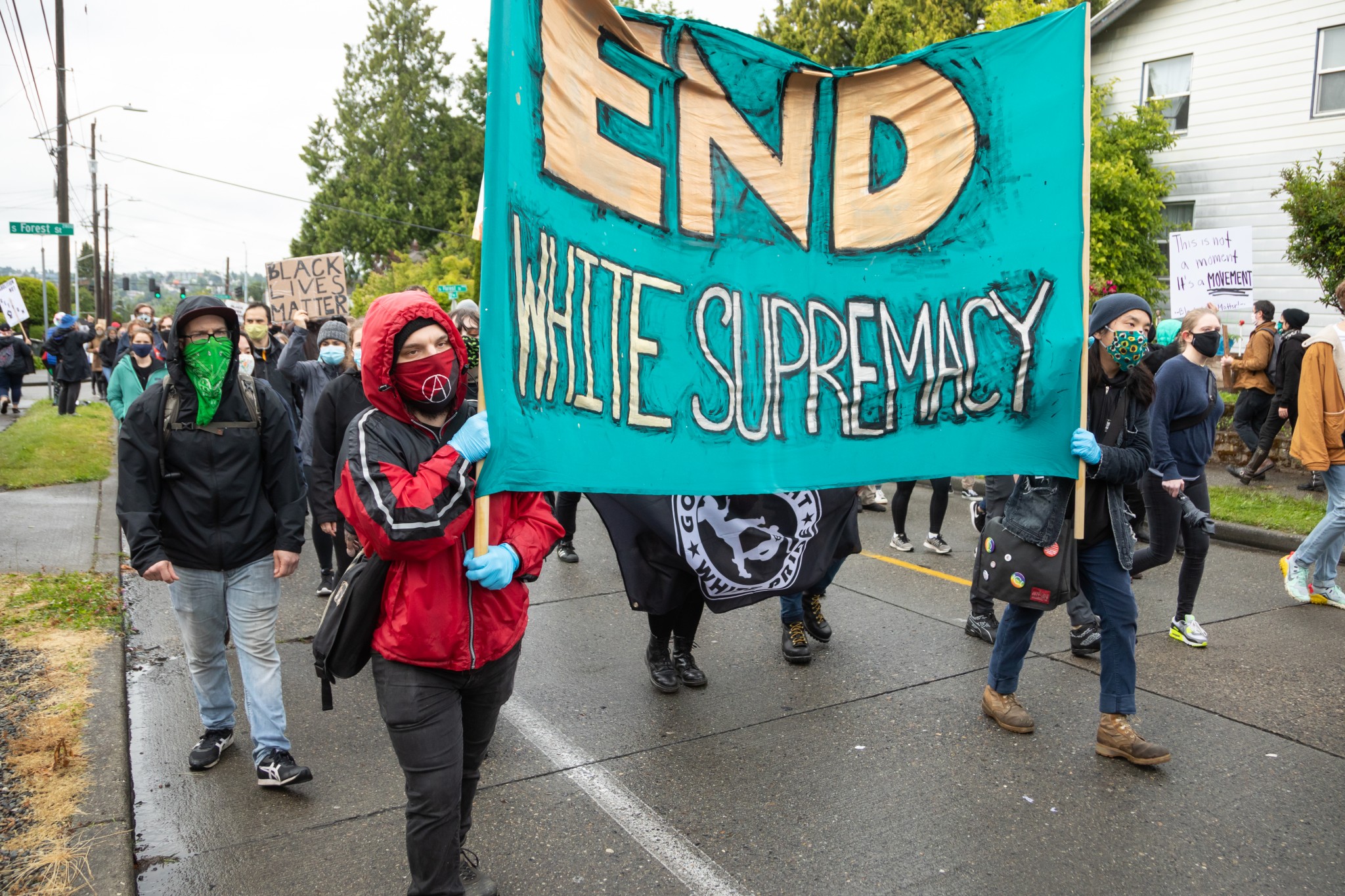 Surveillance footage showing the execution of Delia Johnson on a crowded street in New York City went viral in early August. The unassuming assassin, described by police as a black woman in her mid-20s, fired a handgun into the back of Johnson’s head before casually walking away from the scene. She made no attempt to hide her identity. Like Johnson, the vast majority of shooting victims in New York are black. Black-involved shootings spiked 177 percent in June, a month when New York’s city council voted to cut $1 billion from its police budget.

Just days after Johnson’s execution, 71 people were shot in one weekend in Chicago. More than 2,000 Chicagoans have been shot this year according to the Chicago Tribune. Data confirms the overwhelming majority of victims and shooters are black. Police in the city are quitting in droves, citing opposition from the mayor and city council.

It’s an open secret that black-on-black crime is left unchecked in Democrat-run cities like New York and Chicago, but this inconvenient truth is ignored by the liberal media. “Black on black crime does not elicit outrage or indignation from the Left. Evil has to wear a white face for them to be aroused,” explains civil rights activist Bob Woodson.

The Biden administration claims that the greatest threat to the country is white supremacy. When speaking to a crowd in Oklahoma in June, Biden repeated a claim he had made earlier in an address to Congress: “terrorism from white supremacy is the most lethal threat to the homeland today. Not ISIS. Not Al Qaeda. White supremacists.”

This narrative surfaced as a talking point in 2019, when FBI director Christopher Wray told Congress that “white supremacist-type ideology” was the most predominant form of domestic terrorism. Wray was unable to point to any data to back up his claim. To date, nobody from the Biden administration has produced any data suggesting that white supremacy is pervasive in America, let alone a serious threat to the nation. When confronted with this fact, Democrats claim white supremacy has simply moved underground.

Those of us who grew up in the South, and had face-to-face encounters with the Ku Klux Klan (KKK), see right through the Democrats’ sleight of hand.

My first encounter with the KKK — the standard bearer of white supremacy — was on July 24, 1996 in Fort Worth, TX. I was 19 years old. I had gone with a friend to the AMC Palace Theatre to see the premier of the film A Time to Kill. Apparently upset at the casting of their organization as the film’s antagonist, the KKK showed up to protest. They numbered about a dozen.

I heard someone yelling my name as we waited in the ticket line. “I think one of those Klan guys is waving at you,” my friend said nervously. My friend was Jewish and justifiably terrified. A glance confirmed that one of the menacing, hooded figures was indeed trying to get my attention. I pointed at my chest as if to say, “me?” At that, the Klansmen removed his hood and shouted, “Hey man! Remember me from school?” I was dumfounded. I recognized him as a shy, socially awkward kid from my 11th grade history class. I pretended not to know him and kept walking, trying to wrap my brain around what I’d just seen.

Some of the Klansmen managed to sneak into the theater during the movie. They shouted at Matthew McConaughey’s image on the screen before being escorted out by a lone security guard. This time, my friend and I were more annoyed than terrified. We had seen the face behind the mask — the KKK was a bunch of misguided teenagers.

I had a second run-in with the Klan that summer at a saloon in the Fort Worth Stockyards. They were passing out flyers, only this time they left their hoods at home. I recognized more of them from high school. They were among the least fortunate and had no real prospects. More than anything, they seemed desperate for attention.

Their leaders were no less pitiful. In the 1997 documentary Waco: The Rules of Engagement, which recounted the 1993 FBI siege of the Branch Davidian compound in Texas, archival news footage showed two Fort Worth Klan leaders distributing flyers to journalists at the compound. The corpulent Klan bosses told reporters they had come to offer their services in lieu of the FBI because they were tired of watching the standoff on TV. The media chuckled — these were not serious people. They were more Beavis and Butt-Head than Bonnie & Clyde.

The Klan may have previously been a formidable organization, but by the 1990s it was nothing more than a handful of misfits with no education, no money, no influence and no ties to power. They had no media fanboys or corporate benefactors à la Black Lives Matter, Inc. They are even less relevant today. The Anti-Defamation League (ADL) estimated nationwide Klan membership at 3,000 (0.0009 percent of the U.S. population) and falling in 2016. “Despite a persistent ability to attract media attention, organized KKK groups are actually continuing a long-term trend of decline,” the ADL said in a report. By all empirical metrics, white supremacist ideology is hardly pervasive in America today — it barely registers. White supremacist countries don’t elect black presidents, twice!

By claiming white supremacy has simply moved underground, and citing the absence of evidence of its existence as the smoking gun evidence of its pervasiveness, Democrats have turned white supremacy into an unseen bogeyman the likes of Bigfoot and the Chupacabra. It is a cunning strategy, intent upon manipulating people by playing to their biggest fears. “It’s what we don’t see which is truly frightening,” says legendary Hollywood director Steven Spielberg.

Historian Victor Davis Hanson revealed the Democrats’ true motivation for terrifying voters with tales about a fantom white supremacist threat in an essay titled “What is Woke Really About?”. Hanson suggests the entire woke movement is a cover-up of sorts, a means of deflecting attention away from the Democrats’ policy failures.

Democrats’ social justice policies (defunding the police, ending cash bail, refusing to prosecute crimes, eliminating standards in academics, “disrupting” traditional family structures, etc.) have created a deadly reality for blacks living in Democrat-run cities — there is no place more dangerous for a black person to live in America today. But Democrats avoid accountability for their deadly mismanagement by keeping blacks preoccupied with the fear of white supremacy. As Jason Whitlock recently put it: “Our focus on the alleged racism of others is preventing us from seeing what’s happening to us.”