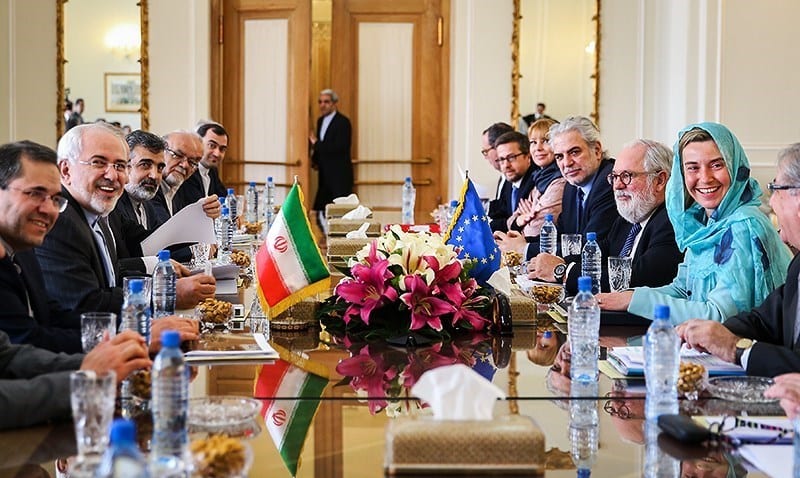 One of President Trump’s overlooked achievements is the unmasking of our false allies in Europe. The governing elite of Europe — the same people who lead the most powerful members of both the European Union and NATO — so intensely and personally dislike Trump they no longer pretend to respect his pro-American policies. Their rebellion against their obligations toward the Atlantic Alliance has reached a dangerous level.

On August 23, the European Commission — the EU’s ruling body — agreed to give Iran €18 million (about $20 million) in “development aid” as part of a larger grant totaling €50 million. The purpose? To offset the effects of Trump’s cancellation of Obama’s nuclear weapons deal with Iran (the “Joint Cooperative Plan of Action”).

The EU’s aid package won’t have its intended effect. It’s far too small to offset the enormous damage to Iran’s economy that our sanctions are accomplishing. Moreover, it is totally mis-directed. Iran’s economy is entirely controlled by the ayatollahs and Iran’s military. Whatever funds are sent in aid to any entity in Iran is under their control.

Earlier in August, the EU had passed what it called a “blocking statute,” which was supposed to prevent European companies from complying with the newly revived U.S. economic sanctions against Iran by requiring that they get the EU’s permission to do so. The “blocking statute” will have no effect because the EU’s companies, having to choose between trading with Iran and trading with the U.S., will have to choose the latter.

Since the beginning of the 10th century, wars between European nations have been as common as flies around a dung heap. Peace was achieved, often fleetingly, only when a balance of power was maintained among competitors.

Wars were fought and peace restored again and again amongst the same nations and empires, alliances shifting constantly. But World Wars I and II brought an unwelcome new belligerent: the United States.

After years of American isolationism, our 1917 declaration of war was welcomed by our allies but grudgingly so. Refusing to admit their strategic failures, they insisted initially that U.S. troops serve under British or French command. That ended quickly after large U.S. forces began to arrive.

That war killed a whole generation of young European men. Their governments were impoverished, cities and towns destroyed. In the aftermath, American President Woodrow Wilson tried to impose his version of peace. Paris 1919, by Margaret Macmillan, shows how Wilson’s arrogant approach to redrawing the European map inflicted lasting wounds on the minds of not only the defeated Germans, but on the minds of many allied leaders and those of some non-belligerents.

Europeans still debate whether U.S. forces had a decisive effect in World War I, but there’s no doubt even in their minds about who was the decisive force behind Germany’s defeat in World War II. But that time, America’s leaders — President Roosevelt, Gen. Dwight Eisenhower, and later President Harry Truman — made enormous efforts to keep our allies, especially Britain and France, involved in major decisions.

At the end of World War II, both NATO and the United Nations were being formed. France became a veto-holding member of the UN Security Council as a sop to de Gaulle’s ego because Truman had excluded him from a key meeting on formation of the UN.

Defeated Germany was divided between the democratic West Germany and Soviet-dominated East Germany. West Germany — and much of non-Soviet Europe, was rebuilt under the Marshall Plan and invited into NATO because it faced the Soviet menace most directly.

Some, unwittingly, prophesied the inevitable problem of American dominance of NATO and America’s taking on the responsibility for Europe’s defense from the Soviet threat. One of them was Charles de Gaulle.

General Charles de Gaulle, leader of the free French forces, was as vain and difficult as only a Frenchman can be. Speaking of him, Winston Churchill once said, “We all have our crosses to bear. Mine is the Cross of Lorraine.”

De Gaulle was France’s president from 1959 to 1969. His resentment of American influence in Europe was profound. It led him to object to the tenets of NATO and to withdraw French forces from NATO’s command. His remarks at an April 1961 press conference, quoted in Henry Kissinger’s book, Diplomacy, are highly important to understanding last month’s EU actions on Iran.

“It is intolerable for a great State to leave its destiny up to the decisions and action of another State, however friendly it may be…[T]he integrated country loses interest in its national defense, since it is not responsible for it.”

In those remarks, De Gaulle foresaw precisely the problem the EU and NATO suffer today, but not the fact that his nation would be one of the first to fall into this self-imposed trap. Since his era, as I’ve often written, the vast majority of the NATO nations — especially France and Germany — have lost interest in their defense because they weren’t responsible for it. In so doing, they have failed in the first duty of every sovereign nation.

The EU and NATO nations had been coddled for so long that they came to believe that it was our duty to protect them regardless of what they did or didn’t do. None of Trump’s predecessors — including both Presidents Bush, President Clinton, and President Obama — took issue with Europe’s uninterest in its own defense.

From that uninterest and belief that their defense was our responsibility sprang the enormous resentment, the quasi-enmity that Trump has unmasked among essentially all the leaders of the NATO nations. Their intense personal dislike for Trump and his actions — nullifying the JCPOA and imposition of tariffs on European products — served as the hand that tore the mask off the face of Europe’s rebellion against American power and interests.

The EU’s actions — the blocking statute and the new aid package for Iran — are not mere appeasement. These actions clearly signal that — as French President Emmanuel Macron and German Chancellor Angela Merkel have both indicated — Europe no longer feels any allegiance to the United States and has chosen to go beyond appeasement.

Vidkun Quisling acted as prime minister of Norway in 1940-1945, when the country was occupied and its government controlled by Nazi Germany. His name became synonymous with collaboration with the enemy. Iran isn’t occupying the EU nations. Nevertheless, the EU’s August actions are those of quislings.

The EU’s actions come at a time when the threat from Iran is growing. In 2011, an Iranian plot was foiled that was intended to kill Adel al-Jubeir, then Saudi ambassador to the U.S. and now Saudi foreign minister, in Washington, D.C. Recently, two Iranian spies were arrested in the U.S. It should be no surprise that Iran is doing its best to operate spy networks in the U.S. It is certainly doing the same in other NATO countries.

The UN’s purblind nuclear watchdog, the International Atomic Energy Agency, has recently repeated its report that Iran is complying with the JCPOA. As I’ve written repeatedly, because Iran forbids IAEA inspection of its principal nuclear weapons development sites, the IAEA reports are worse than worthless.

The IAEA has no way to determine whether Iran is complying with its obligations under the JCPOA. We know that Iran is partnering with North Korea to develop its nuclear weapons and missiles capable of delivering them. By sending aid to Iran, the EU is implicitly endorsing Iran’s partnership with North Korea.

Announcing the aid package to Iran, EU Vice President and “high representative” Federica Mogherini said, “Since the renewal of the EU-Iran relations as a result of the Iran nuclear deal, cooperation has developed in many sectors. We are committed to sustain it and this new package will widen economic and sectoral relations in areas that are of direct benefit to our citizens.”

The EU cares nothing for its own defense, only about the money it can earn by trading with Iran. Mogherini’s remarks are redundant proof of that and of the fact that the EU has decided to embrace the role of quislings in the face of an existential threat to itself.

The EU’s actions directly challenge Trump’s Iran policy. The president has long been highly critical of the NATO/EU elite, but now he needs to increase pressure on them both diplomatically and economically.

Tweeting isn’t enough. Trump should make a strong policy speech about the wrongful approach the EU — and NATO — are taking toward Iran. He should also object to Germany’s recently published consideration of an aid package for Turkey, which threatens to turn loose another tidal wave of Muslim immigrants on the EU. He should also remind Germany — as he has in the past — that its reliance on Russian gas pipelines for energy increases its dependence on Putin’s Russia.

Trump can state a vision for the future of NATO — if there is one — to address these challenges and chart a way forward for the Atlantic Alliance. He probably can’t get the EU to reverse its August actions, but he needs to try.