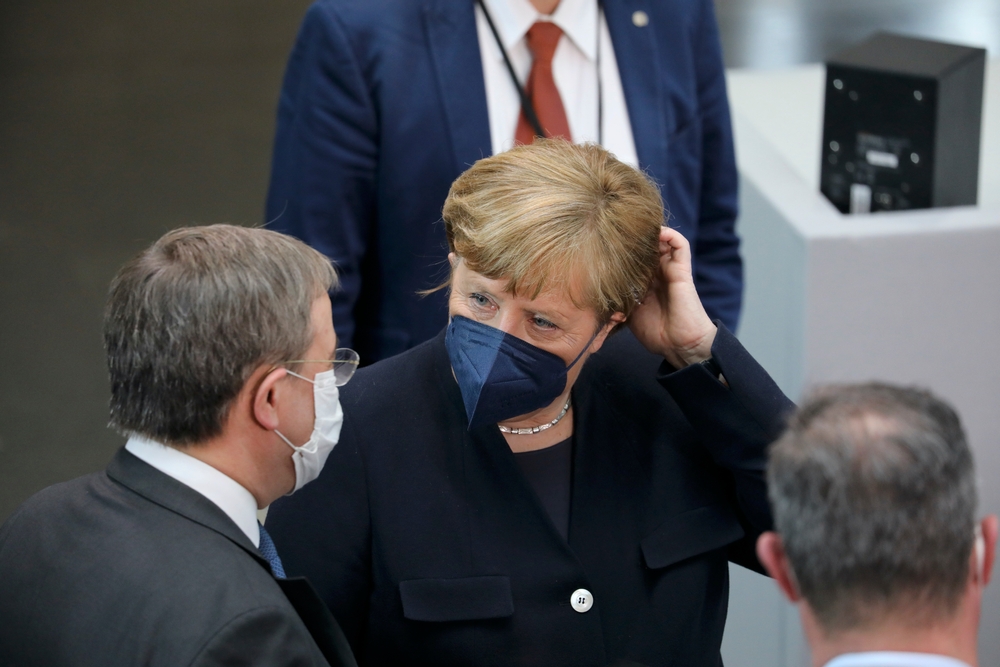 Even if you think Russia has some legitimate grievances, this war thing is not good. M’kay? It’s a horrible waste of life and property, and it will hardly just be the civilians of Ukraine and Russia paying a steep economic price. But it would never have happened if Russia couldn’t afford the world’s third-largest military — with only the 11th-largest GDP. Where is it getting the hard currency to oil that war machine (pun intended)? It’s essentially fossil fuel exports to our NATO allies, and especially the largest of them, Germany. And yes, even some exports to the United States.

Russia is a nation cursed with awful weather, but blessed with great poets and, more to our point, the world’s greatest fossil fuel reserves. Granted, that doesn’t directly translate into GDP size. Russia’s amounted to only $1.48 trillion in 2020. That puts it well behind Germany ($3.85 trillion), the U.K., France, and other European countries. Per capita Russian GDP ranks 68th, well below Chile.

So while Germany has been spending only 1.4 percent of GDP on it military, Russia spends 4.3 percent. That’s part of how it can have so many weapons. The other part is its export revenues.

Russia is the world’s second-largest fossil fuels producer, behind only the United States. But America consumes most of its fossil fuels itself, with more than double Russia’s population and much greater use per capita. In terms of exports, for petroleum Russian ranks second worldwide, for gas first, and for coal third. And it looks even better against the competition when you consider that even as the U.S. exports a lot of oil and gas, it imports a lot as well.

Overall in Russia, fossil fuel exports reached $262 billion in 2019 and made up 60 percent of its total exports. (Because of COVID, 2020 was an outlier.) And with the state-owned gas producer Gazprom having enjoyed record profits in 2021, 2022 may be the most lucrative year ever. Na Zdorovie! Without that, the country couldn’t possibly maintain its massive military.

And who, pray, is buying all that fuel?

Most of it goes to Europe, primarily Germany. Germany gets almost all of its gas from Russia. No, not imported gas — total.

All 27 members of the EU plus the U.K. are now energy importers, including Denmark, which until recently was a net exporter. In 2019, Europe got over 43 percent of its imported coal from Russia, 26 percent of its oil, and 34 percent of its gas. Russia’s share of EU imports of natural gas between 2009 and 2019 increased from 26.9 percent to 34.3 percent.

It appears all those solar panels and wind turbines haven’t accounted for as much as we’ve been led to believe in any realistic sense. Specifically, they now account for 20 percent of European electricity despite massive subsidies and mandates.

Yes, to an extent Europeans buy from elsewhere. The U.S. is Europe’s second-largest supplier of coal (albeit with plenty to spare) while 37 percent of its natural gas exports already go to Europe, and American gas production has risen dramatically over the last few years. America has just become Europe’s largest supplier of liquefied natural gas (LNG). But liquefying dry natural gas for overseas shipment requires several steps and considerable energy, as does the fracking the U.S. uses to get much of that gas. Thus all else being equal, Russian gas obtained without fracking and delivered dry through pipelines is going to be cheaper whether overland as currently or under the sea as with the recently completed (and now on hold) Nord Stream 2.

That said, both the U.S. and Qatar are expanding ports to ship LNG, and Germany has plans to build ports to receive it. But, notes the Wall Street Journal, “it would take at least two years for greater volumes to come to market — and even then Europe will be in fierce competition with Asian nations such as China.”

Germany and its leading by example has left Europe with a tremendous hunger for fossil fuels, and Putin has eagerly helped.

Europeans really painted themselves into a corner. In a sense, albeit indirectly, France and Germany saw this coming, and France did something about it while Germany started to — and then horribly reversed course.

After the 1973 Arab oil embargo, even though France was almost untouched, the government decided it couldn’t be held hostage in the future and went on a massive spree to replace fossil fuels with nuclear. Within just seven years most of its grid energy was from nuclear, and soon thereafter it had accomplished its goal and actually become the world’s biggest electricity exporter. It still is.

Germany, with by far Europe’s largest energy demand (by country, not per capita), was heading in that direction. It had 26 nuclear plants providing almost a third of the nation’s electricity. It could have eliminated use of fossil fuels for the grid both domestic and imported, while dramatically decreasing its “greenhouse gas” (GHG) emissions.

Then, like France, it could have become an exporter. Meanwhile, 11 other EU-27 countries had nuclear reactors, as does the U.K. The entire Western European grid — heck, make that Europe generally — could be supplied by nukes, along with some energy the greens love such as wind, solar, and hydroelectric. Then they could have gone even further, replacing gas heat with electric.

But then came Chernobyl in 1986 and Fukushima in 2011. Never mind that the real Japanese disaster was about 18,500 souls washed away by an utterly massive tsunami. Three reactors on the coast went into meltdown because they used old active shutdown technology, causing perhaps one radiation death. Also never mind that Germany has low seismic activity and thus gets tsunamis approximately never.

That was it. Germany loves its environmentalists almost as much as it loves beer. So when the Green Party demanded shutting down the nuclear industry and replacing it with “renewable” energy, Chancellor Angela Merkel, despite being a scientist, clicked heels and snapped to it. Only three plants are still operating, and they’re to be shuttered this year. Don’t assume the current crisis will change that.

Meanwhile, those nifty articles about how much power the country gets from “renewables” always commit the same crime; they exclude imports. Both media and governments like to play tricks. ScienceAlert declared years ago, “Germany Can Now Produce Half Its Energy from Solar.” The reality: that figure applied for a few hours one day. The website yanked it after I wrote about it. (READ MORE from Michael Fumento: Europe’s ‘Green Energy’ Enables Putin’s War Machine)

As a result, Germans pay more for electricity with taxes included than any other Europeans, as much as three times that of other EU countries, and, yes, considerably more than France. And yet it now has mandated a phase-out of internal combustion vehicles by 2030. Viel Gluck! Good luck! Meanwhile President Macron — bless his French derrière — has announced his country will build more reactors, tying it to the country’s goal to reduce GHG emissions, while the Netherlands has decided to extend the life of its current sole reactor and add two more.

But Germany and its leading by example has left Europe with a tremendous hunger for fossil fuels, and Putin has eagerly helped. That, in part, is why Europe recently has paid near record highs for its energy. “Nord Stream 2 is strongly supported by the German manufacturing community, which sees the gas supply as strengthening its bottom line.” So claimed the environmentalist news service Cleantechnica.com in an article published after the invasion.

To the extent Russia has played a role, part has been opportunistic and part appears to be extortion. Nord Stream 2 “is no ordinary business project,” states the Atlantic Council. “On the contrary, it is a geopolitical weapon aimed at the heart of Europe that has been conceived since day one as a tool to isolate Ukraine and strengthen Russia’s position in its confrontation with the Western world.”

That in part is why even before the invasion Germany held up the approval and now Germany says it will remain closed. Unfortunately, much of Russia’s currently used gas pipelines go through Ukraine …

But it remains that Europe has bought Russia’s military. In fact, Europe, and Germany specifically, have probably also directly kept Putin in power, since his kleptocracy is essentially built on energy production. It’s also tremendously helped China’s military, which has bought and stolen a lot of Russian military technology.

Yes, the U.S. has also contributed to the Russian war machine — but to a vastly smaller extent.

In 2021, the U.S. imported an average of 209,000 barrels per day of crude oil and 500,000 of other petroleum products from Russia, according to the American Fuel and Petrochemical Manufacturers trade association. That was just 3 percent of U.S. crude oil imports and 1 percent of the total crude oil processed by American refineries. By contrast, 61 percent of the nation’s crude oil came just from Canada, and it has about 80 total suppliers.

Indeed, despite memes you may have seen about the U.S. losing its energy independence under President Biden, it is still a net exporter of all fossil fuels, including petroleum and petroleum products. But foreign oil is often cheaper, so we still import. So maybe Biden finally consenting to an embargo on Russian fossil fuels will have a slight impact. Or maybe not. Unlike dry gas, petroleum is extremely fungible and comes with no “Made in X” label. So we could soon just be buying Russian oil from a middleman nation.

As for Biden killing the Keystone XL pipeline, only 8 percent was completed anyway and would only have simplified importing expensive Canadian tar sand crude.

It can also be noted that without the insatiable demand for Chinese imports, Beijing wouldn’t be able to afford its massive and ever-more-intrusive military. That’s our cross to bear.

But gee, Europe didn’t need to sacrifice a thing. It could have been win, win, win. Cheaper electricity, cleaner electricity, less or no dependence on Moscow. Instead, it many ways it now faces a nightmare.

Michael Fumento (www.fumento.com), a paratrooper combat veteran, is an attorney, author, and science journalist for over 35 years. His work has appeared in the New York Times, the Washington Post, the Sunday Times, the Atlantic, and many other fora.