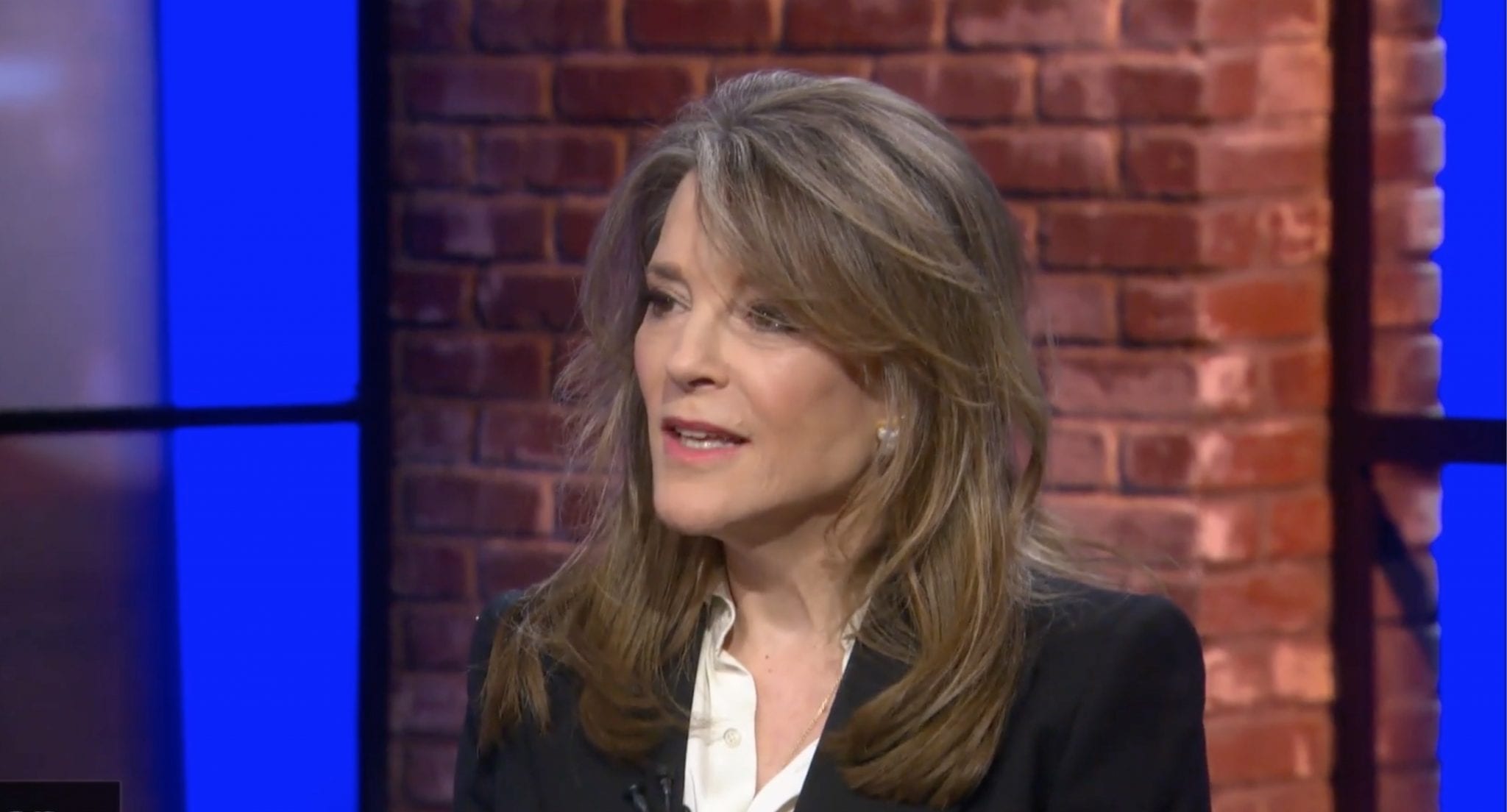 Four years ago, Democrats were gearing up for a pre-determined outcome, the anointing of Hillary Clinton as the party’s presidential candidate. Convinced they were “on the right side of history,” Democrats believed Hillary was destined to succeed Barack Obama, America’s first black president, by becoming our first female president. The only real opposition to Mrs. Clinton’s nomination came from Bernie Sanders, the socialist senator from Vermont who had never previously identified as a Democrat. The weakness of Hillary’s candidacy was exposed in the 2016 primary campaign, when Bernie and his wild-eyed supporters very nearly derailed her nomination, being foiled by the Clinton machine’s control of so-called “super-delegates.” Meanwhile, Donald Trump stunned the Republican establishment by running roughshod over a field of 16 other GOP hopefuls, then shocked the world by upsetting Mrs. Clinton on Election Day.

As the Democrats prepare for 2020, the number of entries for their presidential primary campaign is expanding rapidly and whoever gets the nomination to face Trump next year will first have to defeat more than a dozen rivals. There is no pre-anointed front-runner this time, changes to the party’s rules have diminished the power of super-delegates, and rage against the incumbent Republican has inspired a lot of Democrats who almost certainly have no chance of winning to throw their hats into the presidential ring. The announced format for the first televised debates among the Democrat hopefuls will include as many as 20 candidates, randomly divided into two separate debate groups, with such criteria as fundraising and poll numbers determining who gets on the stage. So while most of the national media coverage has focused on a handful of big names — Sanders, Massachusetts Sen. Elizabeth Warren, California Sen. Kamala Harris, former Texas Rep. Robert Francis “Beto” O’Rourke, and the long-rumored candidacy of former Vice President Joe Biden — there is a furious scramble among lower-tier candidates to qualify for those first TV debates, now barely three months away. Given the prevalence of identity politics and left-wing policy ideas among Democrats, their 2020 field is beginning to resemble a parade of clowns emerging from a circus car. 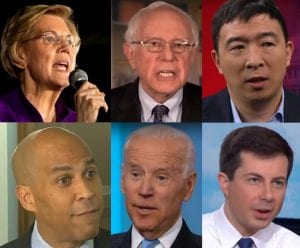 There is Andrew Yang, an Ivy Leaguer (Brown University, Columbia Law) and entrepreneur whose best-known policy positions are universal basic income (giving everybody $1,000 a month) and opposing circumcision. There is South Bend, Indiana mayor Pete Buttigieg, “the first openly gay Democratic candidate ever to run for President of the United States,” according to Wikipedia. (Does the word “openly” in this description imply that some previous Democrats were closet cases? Adlai Stevenson could not be reached for comment.) And there is Miramar, Florida mayor Wayne Messam, whose qualifications include being a wide receiver for Florida State University’s 1993 national championship football team. No intelligent observer expects such candidates to win the nomination. However crazy Democrat primary voters may be, they’re not crazy enough to nominate someone named “Buttigieg” for president, but these clown-car campaigns are not about winning. Instead, what such candidates seek is the status-enhancement to be gained from nationwide exposure in the televised debates. If you’re a mayor who hopes someday to become a congressman, senator, or governor, being one of the 20 candidates in the first debates — in late June on MSNBC and Telemundo, and July on CNN — would be a serious boost to your national profile.

Conservative pundits who have devoted their attention exclusively to big-name Democrats in the 2020 primary field may be underestimating the potential impact of minor candidates. In the early debates, with so many candidates sharing space on the stage, there will be an incentive for the lesser-known contestants to gain attention by attacking one or more of the major candidates. If any of the (allegedly) more serious contenders make a major gaffe, or otherwise fall short of expectations, they could quickly tumble out of the top tier, opening up a slot in future debates for a minor candidate who performs particularly well on TV. Some of the better-known hopefuls — e.g., New Jersey Sen. Cory Booker, Minnesota Sen. Amy Klobuchar, New York Sen. Kirsten Gillibrand — risk early elimination if they stumble in the first round of debates. Something similar happened in the 2016 Republican campaign, when highly-regarded Wisconsin Gov. Scott Walker turned in lackluster debate performances, saw his support evaporate, and quit the race in September 2015. Once the June/July debates are over, the number of slots on the Democrat debate stage will begin to shrink and, like a game of musical chairs, candidates will face elimination if their poll numbers decline.

It is by no means certain that, six months from now, when the contest has been narrowed to perhaps eight or 10 candidates, that all the early top five — Biden, Sanders, Harris, O’Rourke and Warren, according to the Real Clear Politics average of national polls — will still be in the race. All the current poll leaders have flaws and weaknesses, and who knows if Democrat primary voters might quickly tire of Warren’s angry-schoolmarm act or O’Rourke’s arm-waving enthusiasm? The bigger they are, the harder they fall, and if Biden isn’t still at or near the top of the polls in September, the curtain could descend swiftly on his campaign. The collapse of any major campaign would produce turbulence that might clear the way for a dark-horse candidate to rise suddenly from this large field of Democrat hopefuls, and the question is, which of the current “minor” candidates has the strongest chance of pulling off that kind of surge?

Say hello to Marianne Williamson, a best-selling author who has often been called Oprah Winfrey’s “spiritual guru.” Although she isn’t even a single-digit blip in the national polls, Ms. Williamson’s campaign has already been featured on ABC’s Nightline, and her campaign appearances in Iowa and New Hampshire have received respectful coverage in such local media as the Des Moines Register and the Concord Monitor. Her only previous foray into electoral politics was a fourth-place finish in a 16-candidate California congressional race in 2014, but Ms. Williamson seems to have learned a lot in the past five years. Her campaign website is state-of-the-art, her calendar of public appearances is carefully targeted toward the early primary and caucus states, and she has already hired state campaign directors in Iowa, New Hampshire, South Carolina and Nevada. “We’re getting traction,” Williamson campaign spokeswoman Patricia Ewing told me in a brief telephone interview Thursday. “We’re very happy with it.”

Ms. Ewing said the campaign is “confident” Ms. Williamson will surpass the crucial metric of 65,000 unique donors that the Democratic National Committee has established as the threshold to participate in the first televised debates. She already has more than 25,000 donors, Ms. Ewings said. “It’s not a stress point for us at all. We know we’re going to hit the numbers by the time the DNC wants us to.” Ms. Williamson has spent more than 30 years making public appearances to promote her popular books and, before launching her current campaign, went on a 75-city national tour with an average of 500 people attending each event, Ms. Ewing said. Do the math, and that adds up to nearly 40,000 dedicated supporters. Given how easily an “outsider” candidate like Trump vanquished a field of Republican politicians in the 2016 primaries, it’s not impossible that Ms. Williamson could pull off a similar feat among Democrats in 2020. “We believe that a presidential candidate can come from someone who is not a career politician,” Ms. Ewing said. “Someone who has an understanding of the breadth and width of the country.”

Anything is possible when running against a field of clown-car candidates like the gaffe-prone Biden, the pro-foreskin Yang, and former Maryland Rep. John Delaney, who’s practically bribing donors in an attempt to reach the 65,000-donor mark, matching them with contributions to groups like Planned Parenthood. Most of the Democrat candidates seem to be striving to out-do each other in terms of anti-Trump rage and manic energy. Warren looked like she’d had three or four too many cups of coffee before her recent CNN townhall, and every time O’Rourke appears in public, there’s a risk an innocent bystander might accidentally get clobbered by his flailing arms. By comparison, Ms. Williamson seems remarkably calm and low-key, as befits a purveyor of New Age spirituality. Her rhetoric is heavy on “love” and “peace,” and even if she can’t win the nomination, perhaps her soothing message can help her fellow Democrats begin recovering from Trump Derangement Syndrome. Otherwise, this overcrowded clown-car campaign might drive them all even crazier than they already are.