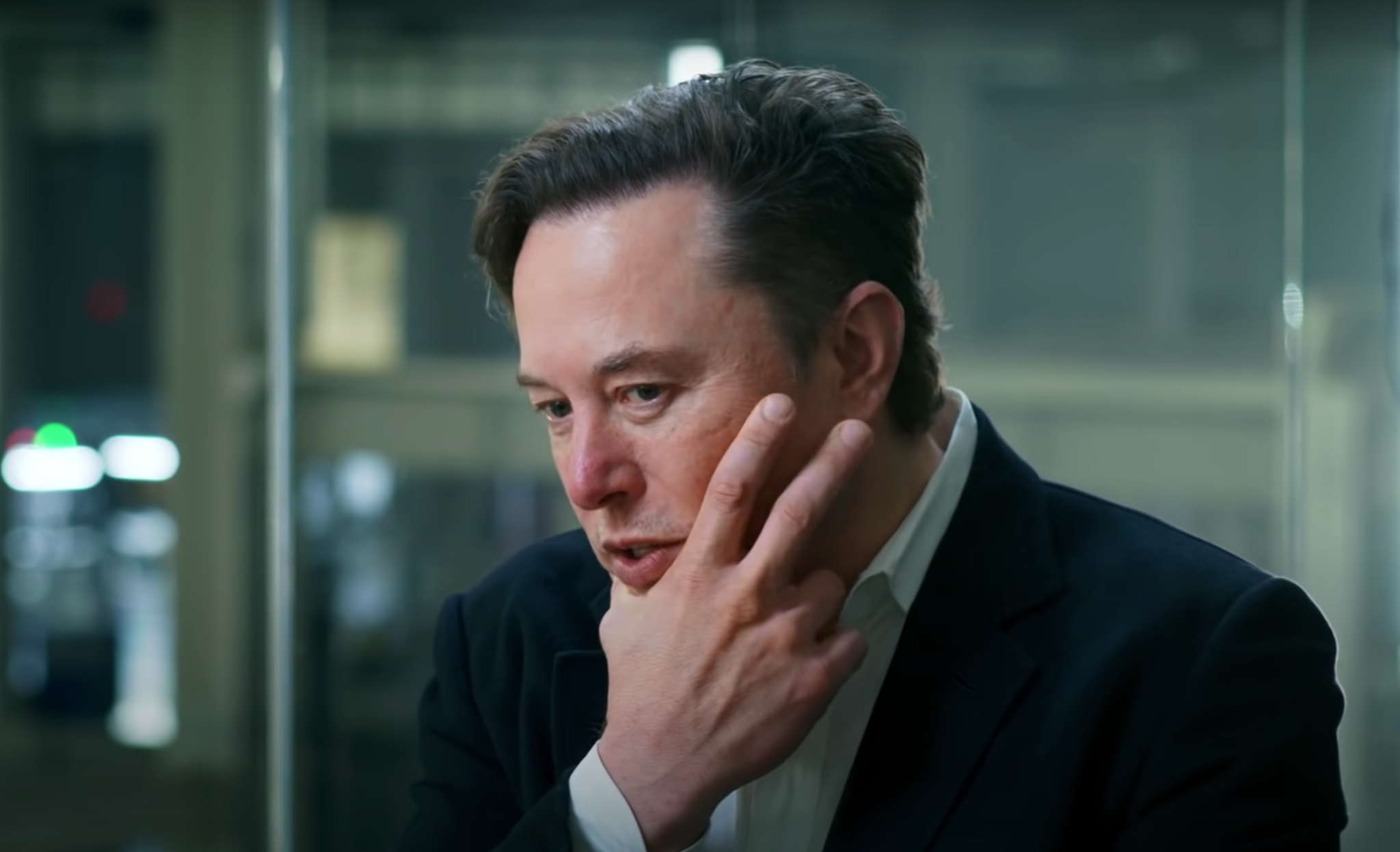 Perhaps the best example of just how far off the deep end things have gone, particularly on Twitter, came in a missive fired into the ether by someone bearing the handle “@FredPalumbo3.”

Yesterday she said something big was going to happen today and lo and behold an attempt on Nancy Pelosi's life which got her husband beaten.

Of course, Greene isn’t quite so skilled at prognostication that she would know the future nefarious plans of drug-addled gay nudist Green Party registrants living in hippie communes across the country from her Georgia home.

When she noted something big was about to happen on Friday, she meant that Elon Musk was taking over the ownership of Twitter.

It turns out that’s a whole lot of a bigger deal than what David DePape did to Paul Pelosi under whatever circumstances were extant in that deficiently secured San Francisco mansion. Musk’s takeover of Twitter has generated instant results that are quite encouraging for those of us who value and cherish free speech and the full exchange of ideas.

Of course, there are lots of us who don’t value and cherish those things. And those people are not happy at all about Musk’s Twitter takeover.

Several Hollywood types, like the middling actress Téa Leoni and the middling pop singer Sara Bareilles, loudly proclaimed their impending exit from Twitter. Those proclamations carried a similar pattern, one that looked as though it issued forth from a publicist’s template: Send out more than a handful of tweets screeching about Musk’s takeover and then announce a justified retreat from the “hate-filled” social platform.

Watch The Spectacle With Melissa Mackenzie and Scott McKay

As though Twitter hasn’t been the public toilet of the internet for a decade or more, thanks in no small measure to the mobs of unshackled and unhinged leftists firing away at cancellations for anyone challenging the things that mindless showbiz automatons like Leoni and Bareilles commonly say about culture and politics.

Twitter cancel culture was institutionalized. There were perfectly mainstream opinions — about transgenderism, COVID lockdowns, the 2020 presidential election, and lots of other things — that would bring a hate mob of registered Democrats down upon one’s head and real sanctions by the platform itself. Tweets were deleted and accounts were banned for dissenting from the blue-checked doctrine established at Twitter pre-Musk. Including, for example, a sitting president of the United States and the nation’s oldest newspaper.

Ahhh, but when Elon came, things changed immediately. The level of free and open debate on that app escalated so quickly upon his takeover that it has seemed to become a completely different platform over the space of fewer than five days.

Conservative accounts saw a surge of followers, an indication they’d been shadow-banned.

Musk fired four of the app’s top executives, most notably its CEO, Parag Agrawal, and its chief counsel, or more to the point, chief censor, Vijaya Gadde. Those two had been the prime movers in turning the app into a one-sided, stacked-deck weapon of information warfare for the Democrat Party’s political-media complex. Musk is now saying that he fired the execs for cause, which, in Agrawal’s case, would void a $42 million severance package.

And he wasn’t without reason to do so. As was first reported by the Intercept, Twitter engaged in a conspiracy with Deep State operatives inside the federal government to suppress dissent from the Left’s favored narratives and to stack its deck against “misinformation”:

The Cybersecurity and Infrastructure Security Agency Act, signed by President Donald Trump, opened the door to this as it formed a new branch within DHS, which then undertook to deal with online “disinformation.” CISA stated its understanding that the mission of that branch of DHS was “evolved,” and meant to communicate their concerns on “disinformation” to social media companies. Social media companies took DHS’ word for it.

DHS used concerns about “marginalized communities” to justify their reach.

Much of this effort became evidence as a result of an attempt to “fight disinformation” in the lead-up to the 2020 presidential election. Both Facebook CEO Mark Zuckerberg and then-Twitter CEO Jack Dorsey spoke about their platform’s effort to suppress and censor reporting from the New York Post. They did this, in part, because the FBI had told these platforms to watch out for a “misinformation” dump.

During the election, there were “weekly teleconference to coordinate Intelligence Community activities to counter election-related disinformation.”

FBI official Laura Dehmlow stated her concern in March that big tech companies were not accountable to the government, saying “we need a media infrastructure that is held accountable.”

This is all coming from the landmark lawsuit that Attorneys General Eric Schmitt of Missouri and Jeff Landry of Louisiana filed against Twitter and other Big Tech actors engaging in online censorship. Musk understands that the involvement of Twitter’s former management team in such conduct has put the app at risk of major liability in federal court, which might well amount to cause for a firing. Musk also said that he wanted to remove some 75 percent of Twitter’s regular staff, with the first round of layoffs of some quarter of the employees coming soon. This week, he walked back that claim.

No company should accept being drafted into service as a government agent to conduct violations against the civil rights of American citizens. Dissent against unproven government narratives about COVID vaccines or face masks or social distancing, for example — dissent that has proven to align with facts and reality while those narratives have not — cannot be censored and suppressed in a free society where open debate is valued.

The censorship and suppression at Twitter have begun to fall away. That the Left hates it so much is quite instructive. They especially hate something else Musk has done, which is to do away with the clownish blue-check system whereby journalists and celebrities, mostly on the Left, were given prestigious “verified” status. According to the Verge, he’ll instead charge $20 monthly for that privilege and make it part of the app’s monetization strategy, which would then democratize the use of Twitter and signify that the days of a self-described enlightened elite using it as a playground at the expense of its normal-guy users are over.

They hate it, and the recriminations are mounting. Musk has been warned by the EU that Twitter must follow its oppressive rules about speech, and General Motors has declared it won’t be advertising its coming all-electric automotive fleet on an app now owned by the proprietor of its competitor in that space. Not to mention several Democrat politicians and bureaucrats now claim a “national security review” of Twitter is coming because the investment group Musk commands that bought the app includes the sovereign wealth fund of Saudi Arabia. There is no indication any Saudis have executive authority under Twitter’s new regime. In fact, Musk has said that, for now, he is the company’s board.

But the Left is screaming that Musk must be held accountable. The diminutive and ferocious Twitter addict Robert Reich, a former Clinton cabinet elf, even demanded Monday night that Musk “relinquish” control of the platform.

And it isn’t surprising that this would be the case. For quite some time, they’ve been the side trying to shut down the argument. On issue after issue — race, sex, “climate change,” transgenderism, COVID, Ukraine, the 2020 election, and countless others — the Left has demanded to frame the discussion in terms hyper-advantageous to its own fringe position and has engaged in name-calling and vituperation in order to get its way. It refuses to engage with anything outside that frame.

Its positions are so outlandishly awful that it must operate this way. But the Left is nonetheless losing the argument. Next week, there will be an election that could, if former House Speaker Newt Gingrich is correct, result in the worst level of representation on Capitol Hill for the Democrat Party since 1920. Should that happen, it might just herald the beginning of the revivalist era in American politics.

Musk’s Twitter takeover won’t have much of an effect on that electoral cycle. But, going forward, it will definitely have an effect in broadening the national conversation, giving air to perspectives long suppressed by Twitter’s former management, and reopening our dialogue so that we can examine anew so many of the elite proclamations that simply don’t work for us anymore, if they ever did.

Whether Musk is a true ally for conservatives or simply an honest broker who realized a gross imbalance and possessed enough civic spirit that he would step in to help resolve it is immaterial. We owe him a debt of gratitude. He has begun to save Twitter, and, with it, he might have contributed to saving America.