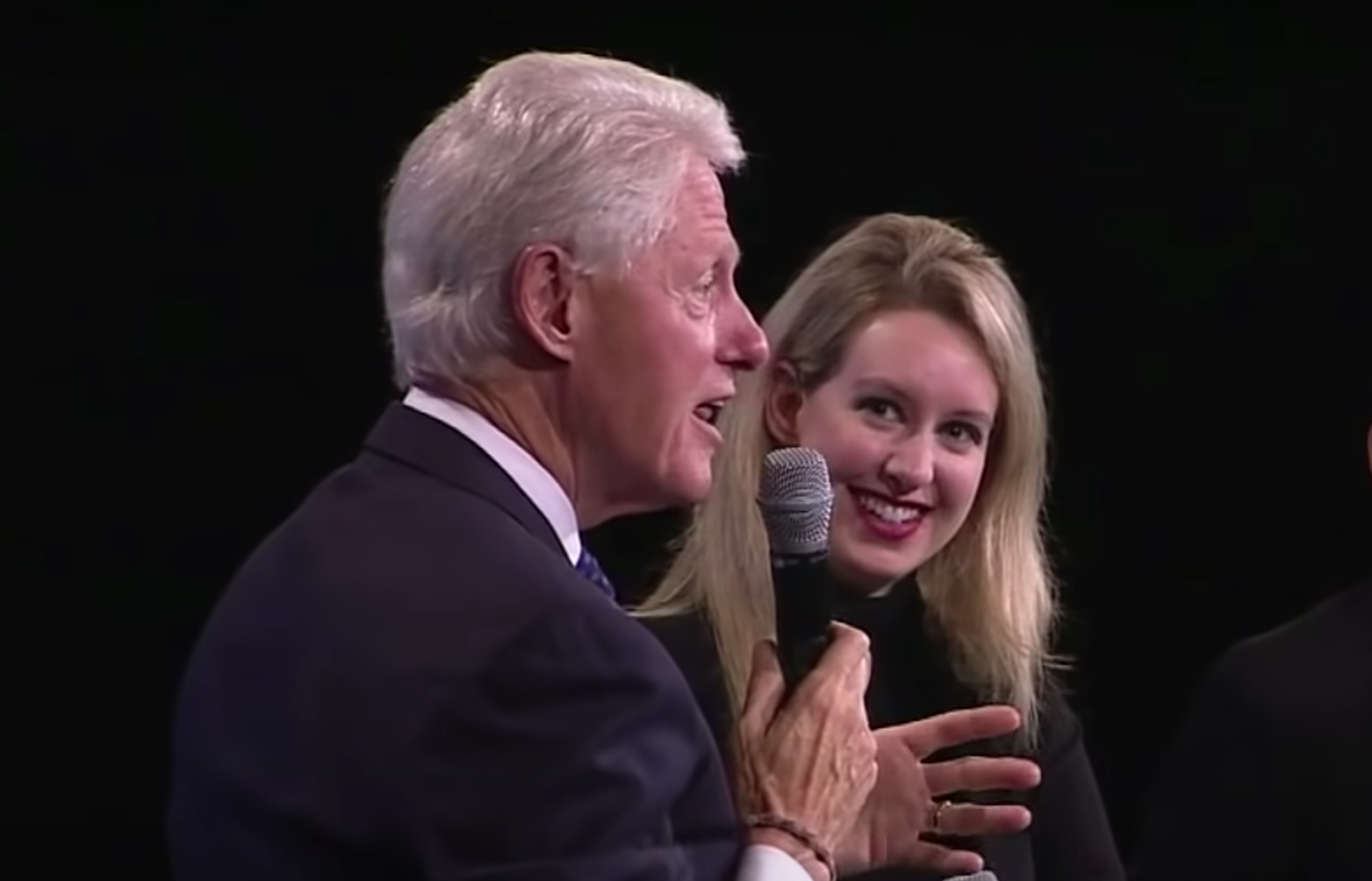 Elizabeth Holmes, the founder of the sham company Theranos, was found guilty this week in a federal court of multiple acts of fraud. Media coverage of this verdict has seemed glancing and perfunctory, as if it is a story the ruling class would rather not revisit. One suspects the ruling class’s reluctance to talk about Holmes is due to its role in creating her. The support that she received from media and political elites made her decade-long con possible.

If Trump had gone to her “laboratory” and praised it, the media would have had a field day. But Biden’s embarrassing visit to Theranos has been conveniently forgotten by most reporters. To its credit, the New York Post dredged the visit back up this week. “Then-Vice President Biden visited Theranos’ California headquarters in 2015, sitting next to its turtlenecked founder during a roundtable and christening the facility the ‘laboratory of the future,’” it reported.“‘Talk about being inspired,’ Biden gushed, according to a Theranos press release published after the visit. ‘This is inspiration. It is amazing to me, Elizabeth, what you’ve been able to do.’”

Biden’s visit to Theranos was even worse than Obama’s visit to Solyndra, the solar panel manufacturer that went bankrupt. The mumbo-jumbo of Holmes appealed to Biden. He swallowed her claims whole. “This is the laboratory of the future,” Biden said. “What’s most impressive to me is you’re not only making these lab tests more accessible, you’re charging historically low prices, which is a small fraction of what is charged now, while maintaining the highest standards, and empowering people whether they live in the barrio or a mansion, putting them in a position to help take control of their own health.”

A few months later, the Wall Street Journal exposed the fraudulence of Theranos. Holmes was hawking a device that she knew didn’t work. It is odd to hear people talk about her “charm” and power to cast a “spell” over figures like Biden. What charm? In the old interviews I have watched, what’s most noticeable about Holmes is her ludicrous and off-putting baritone, which she affected in order to convey seriousness. It was as phony as everything else about her.

Bill Clinton lavished praise on Holmes. He invited her to his various blather-driven “summits” on health care. At one of those forums, he played the lowly role of interviewer as he lapped up her lies.

The media loved lashing the Enron collapse to the Bushes, but reporters show no such inclination to tie the Theranos scandal to a liberal ruling class that propped up Holmes. She went to functions at the Obama White House, got Biden to endorse her company, and appeared on the covers of countless liberal magazines. But none of that featured in the media’s coverage of her verdict.

The Holmes scandal is also a black eye for the liberal Republican establishment, another wing of the ruling class that the media protects. For years we heard reporters burble about the “impeccable” George Shultz, whom they liked to cast as one of the few “adults” in the GOP. Shultz served on the board of Theranos and recruited Henry Kissinger, Gen. James Mattis, and other supposed pillars of moderate GOP probity to serve on it as well. They were all putty in Holmes’ hands, but they haven’t paid much of a price for that association.

It is richly ironic that George Shultz, who was always so worried about his reputation in the midst of what he saw as unseemly conservatism, would end his career by shilling for a monumentally disreputable company, even against the testimony of his own grandson, Tyler, who worked at Theranos until he discovered its fraud and became a whistleblower. Shultz backed Holmes over his grandson and even helped unleash David Boies (another liberal darling, who served as counsel to Holmes) on him. The poor grandson had to shell out thousands of dollars in legal fees to stave off this intimidation. (Shultz and his grandson would later reconcile.)

This all, by the way, vindicates Richard Nixon’s low opinion of Shultz. Nixon once counseled Reagan not to make Shultz secretary of state. Nixon didn’t care for the self-protective tendencies of Shultz that masqueraded as sanctimony.

Had Holmes used conservatives and Trumpian figures to con people, her verdict would have received wall-to-wall coverage. But since her story implicates the ruling class too deeply, the media would rather not dwell on her rise and fall.